Can You Really Make Money With The S’more App?

This app claims to pay you for putting a lockscreen on your phone. But can you really make money with the S’more app?

Making Money With The S'more App

The first thing to talk about is the underlying concept of the S'more app, the fact that it is a lock screen app.

I tend to be a relative fan of lock-screen apps in-general, mostly because they take up so little time that they really don’t seem to be much of a nuisance.

I mean, most people have some kind of a default lock screen set up on their phone anyway. So why not get paid to unlock it instead of just unlocking it without gaining anything?

Of course, the idea is not without its downsides. And while the theory may be sound, it is not often as ‘smooth-sailing’ in practice as it is in planning. These types of apps can also be plagued by problems.

(There is nothing more annoying than having a low-quality lock-screen make unlocking your phone a 5-7 second hassle.)

But what about the S’more app? Does this app pick up the gauntlet where lesser lock-screen apps have failed?

I heard about it through a friend, and decided to try it out when I learned what it was.

I’m all about trying different side hustles, and I am also a pretty big fan of trying new apps. I also love the idea of earning extra money through apps (but on the good ones, of course).

I mean, it doesn’t get much better than that. Earning money through an app that you use to put a lock screen on your phone is, in theory, a pretty sweet way to make some extra cash.

But I should also mention that I am not really interested in making ‘small’ sums of money. I need any side-hustle that I participate in to make the payoff worth the time.

My time is super valuable to me, and before I will spend much time on an app, I need to know that it is going to pay off in a big  enough way to be worth my attention.

So I gave S’more a try. Here is what you need to know.

Trying Out The S’more App For The First Time

As you can see, the app has gotten some pretty decent reviews on Google Play. It has also been downloaded quite a few times. Here are the vital stats. 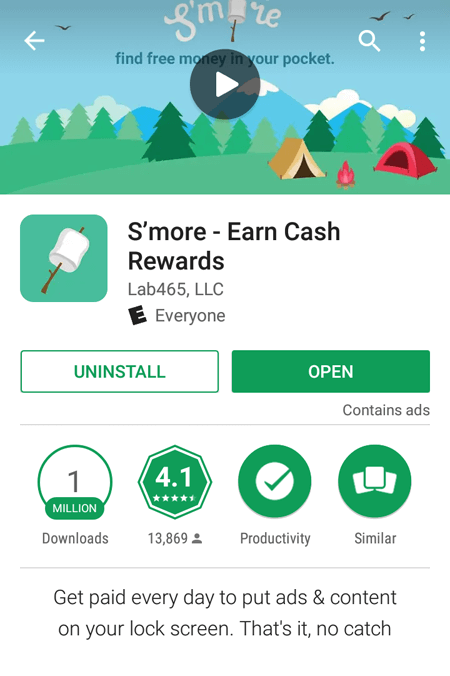 It has over 1 million downloads, and has a user rating of 4.1 stars. That’s not bad. In general, I am leery of apps that have less than 3.5 stars, so this one really blows that requirement out of the water.

The short tag-line description for the app says this.

“Get paid every day to put ads and content on your lock screen. That’s it, no catch.”

This sounded pretty good to me. So I opened up the app to see what I would find. When the app first opened up, I was greeted with three five-star reviews for it that seemed to be ‘praising’ its performance (A little cheesy, yes… but they have to sell themselves somehow, right?).

There was also a ‘Get Started’ button along the bottom of the screen. 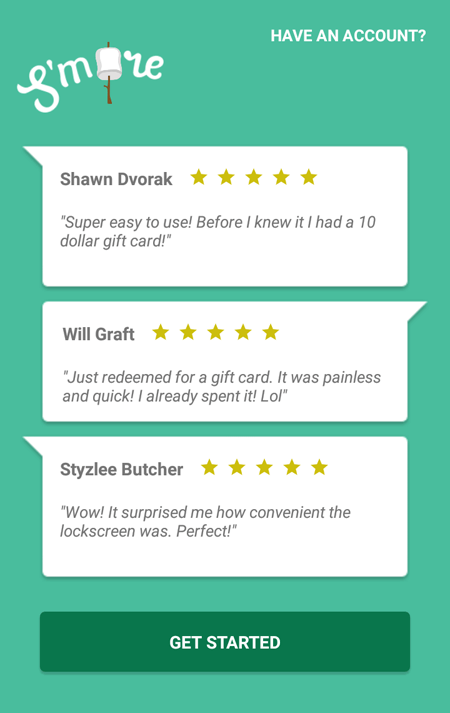 I clicked on the button and was taken to a Terms and Conditions page. I accepted the terms and was then taken to what seemed to be the lock screen. 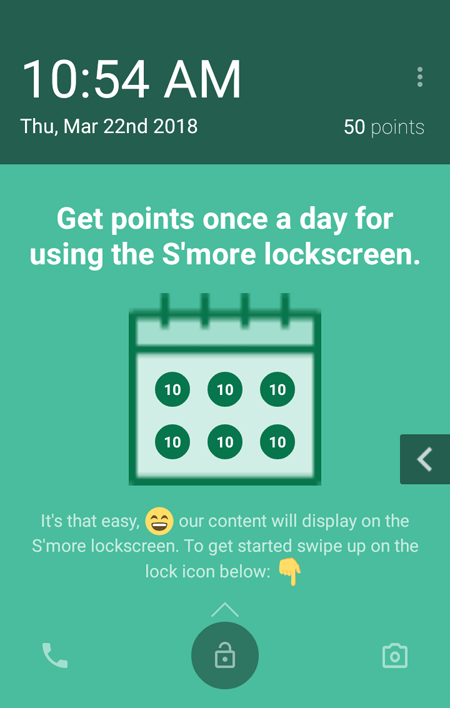 Unlocking the screen, at this point, was pretty easy. You just have to click on the little icon and swipe upward.

After opening up my phone for the first time since installing the lock screen, I was told some additional things about the app. For one, I learned that I could also complete surveys and refer friends to earn points, which was pretty cool.

I was also asked what the app should call me, what my date of birth was, and what my phone number was. I filled in all of these things, and was sent a link that I could use to verify my number. After I finished this step, I was awarded 50 points, and made it to the ‘main hub’ of the app. 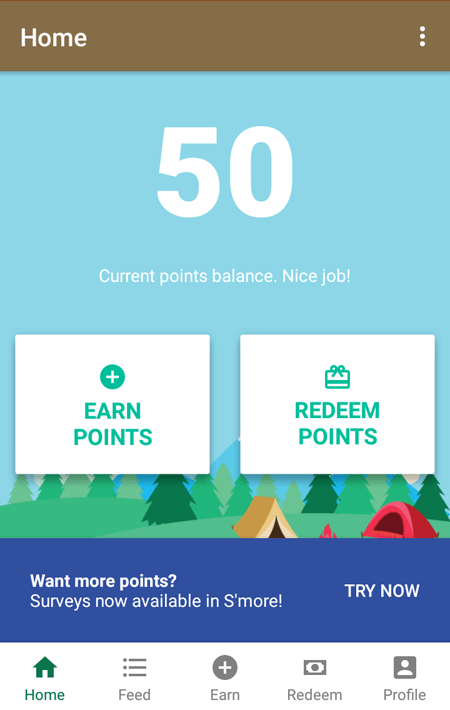 Now it’s time to talk about what I found once I got to this point.

Exploring The Inside Of The S’more App

Inside of the S’more app, I found that I could do a lot of different things. I could earn or redeem points on the landing screen, and I could access various different tabs along the bottom of the screen.

These tabs included the following options: Home, Feed, Earn, Redeem, and Profile. There was also a small menu button at the top-right corner of the screen, where I could learn more about the app.

All in all, this ‘menu setup' was pretty standard. I've looked at a lot of apps that use this same basic layout.

I clicked on the menu button at the top, just to see what I would find.

As it turns out, there were not a lot of options here. There were the terms and conditions, an ‘Opting Out’ page, and a privacy policy.

As of yet, I had earned 50 points… but despite how many times I unlocked my screen again, I wasn’t earning any more.

But I had a little bit of a suspicion about why this might be, so I decided to read through some of the reviews to see what they said about it.

And sure enough, I pretty quickly figured out what to expect based on some of these reviews. 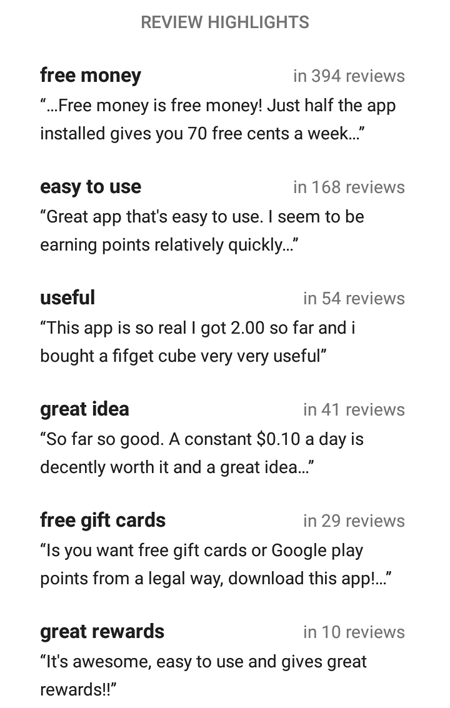 As it turns out, this app earns you about 10 cents per day, seemingly regardless of how many times you unlock it. A lot of reviews indicate that this is the case—which is a bit of a let-down to me.

I mean, the lock screen isn’t terrible. It works pretty well and is pretty minimally annoying—but it is still a little bit time-consuming. I mean, it does add a bit of time to the screen unlock, because it does take me longer to unlock my screen this way than it does for me to do it the ‘traditional’ way.

I checked the ‘Read More’ section of the app, and they confirmed that you don’t make points by unlocking the screen. You earn points for having the screen installed.

So yeah. This was good and bad for different reasons. But with how it worked out in this particular case, I ended up not being a big fan.

I clicked on the ‘Earn Points’ button on the home screen, though, and found out that there were a few other ways to earn. For one, I could refer friends to earn 25 points per friend. I could also enter my email and my gender to earn 10 additional points each. And, of course, I could take surveys.

I clicked on this option, and was instantly taken to a link to Peanut Labs.

My thoughts about this were exactly as follows…

Thanks… but no thanks.

I’m not a huge fan of the whole ‘Peanut Labs’ thing. I have always felt that their surveys were just glitchy enough to be a pain, and I have also always felt like they didn’t pay enough to make the surveys worth the time.

So this ended up being a bit of a dead end for me.

At the end of the day, the lock screen does work well—but maybe the entire concept just falls a bit short of what I’m aiming for (which means that other lockscreen apps, like Unlock & Win, Slide Joy and Fronto aren't amazing either).

My Personal Feelings About The S’more App

First of all, the app is not terrible. In fact, as far as lock screen apps go, it is pretty decent. The fact that you earn a consistent amount every day regardless of how many times you unlock it is a positive in some ways, because you will always know how many points you can count on earning in a week—and that is pretty cool.

I feel like this app falls far short of being a profitable side-hustle. The extra time spent ‘durdling' with it is just not worth the 70 cents per week that you earn for using it (in my case, anyway).

If this sounds like something you would be alright with, then this app can absolutely earn you a bit of extra cash.

But it is not a side-hustle, and it is most certainly not going to make you rich, or even help you to get ahead on your bills.

At best, S’more is a fun app that you can use to get some cool gift cards over time. But if you want to make some serious cash in the long-term, you are probably going to have to find something a little bit better.

Our Final Thoughts About The S’more App

Should you download it and use it to earn some extra money?