Can You Really Make Money With The Unlock & Win App? 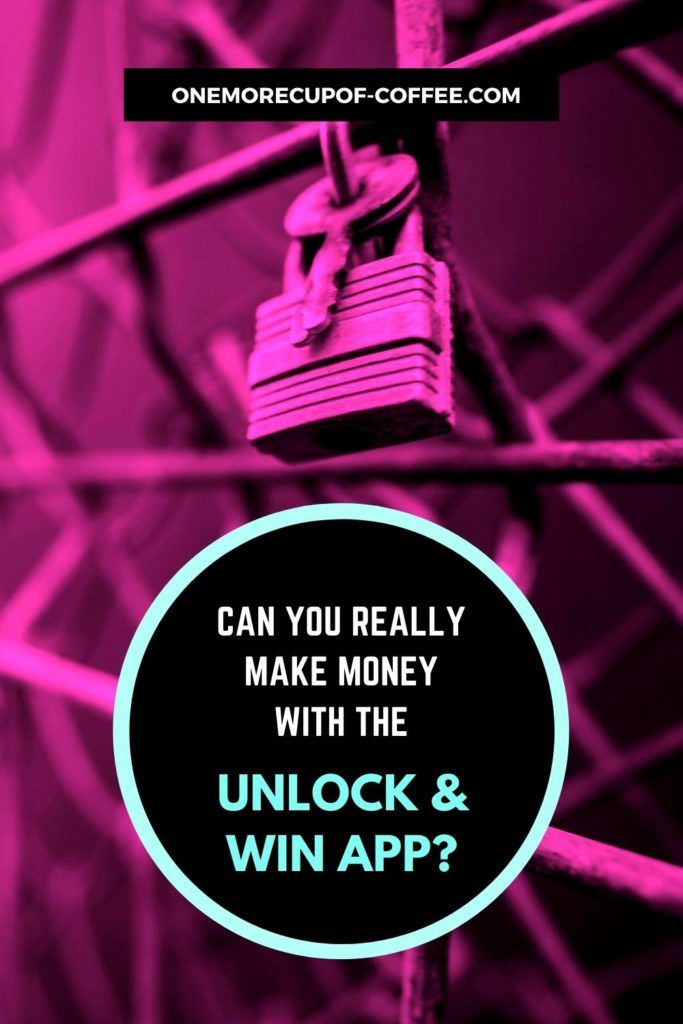 This app promises to make you some sweet extra cash by putting a lock screen on your phone… but can you really make money with the Unlock & Win app?

The first thing we need to do is take a look at the app itself.

The Google Play stats for the app aren’t too bad, really. It has a user rating of 4.2 stars, which is well above average. It also has over 500,000 downloads, which is a very good sign. 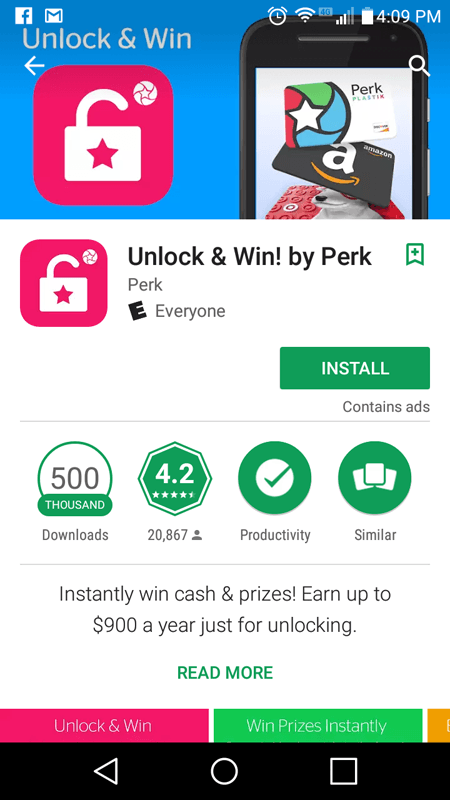 Upon opening it up, I was greeted, first off, with what appeared to be an introductory screen. 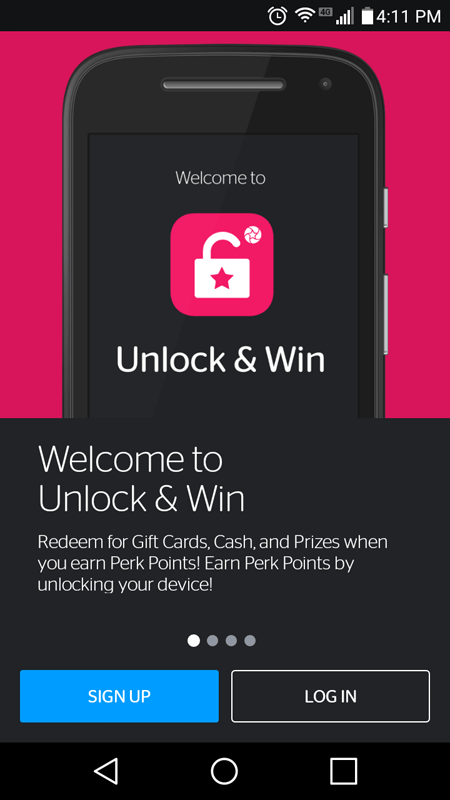 Here, I learned a few interesting things about it. There were several pages to scroll through, and each one taught me a bit more about how the app worked. Here are the main points…

Ok. So far so good. I was definitely liking the sound of it thus-far. I have used apps that gave out Perk Points before, and some of them weren’t too bad. So I will say that, at this point, I was pretty optimistic about the Unlock & Win App.

But now, it was time to get started with it. I started by signing in with my Facebook, which was pretty easy. And before I knew it, I was taken to my new lock screen.

Apparently, this app gives you the opportunity to earn points by unlocking your phone. It does this by putting on its own lock screen. 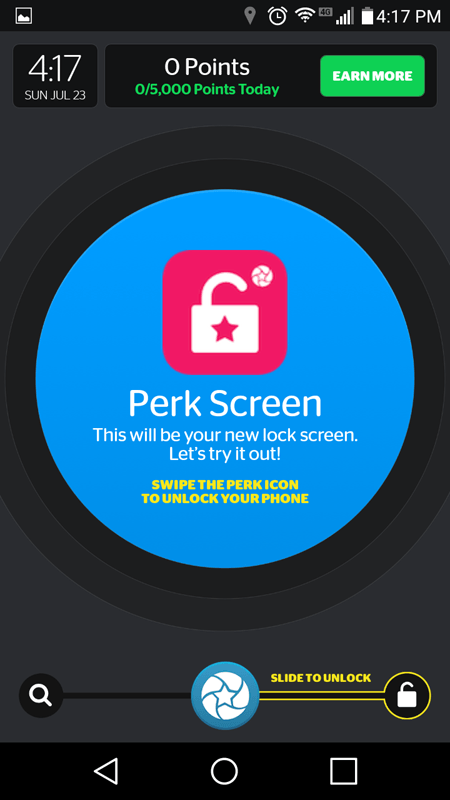 Let’s talk about this.

Ok. So I tried to unlock the screen—and it seemed like I was actually going through some sort of a tutorial. Because I would unlock it, earn points, get a little message with some new information/instructions, and would then be instructed to unlock it again.

After earning quite a few Perk Tokens (like 110 or something like that… but do not confuse these with Perk Points! We will talk more about this later.) and unlocking my screen several times, I was finally taken to a screen that told me I could ‘get started’ by activating my lock screen.

Now we were getting somewhere!

After this, I was taken into the app and asked to tell them about myself. 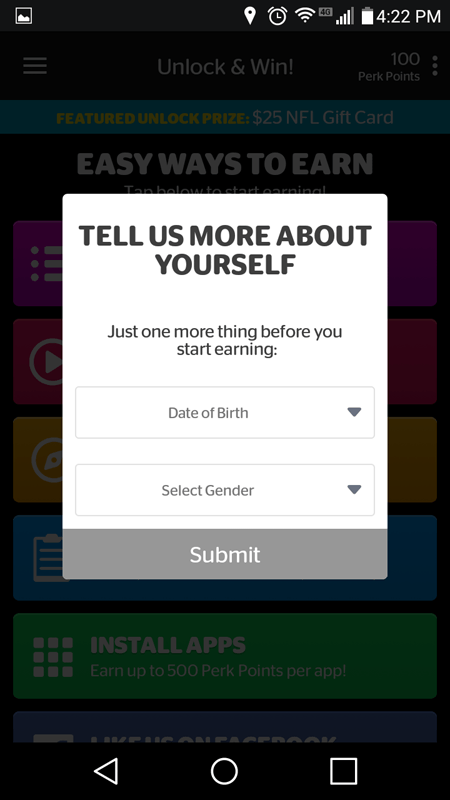 All I really had to do was share my gender and my date of birth to get past this part, then I was taken to what appeared to be the ‘main hub’ of the app. 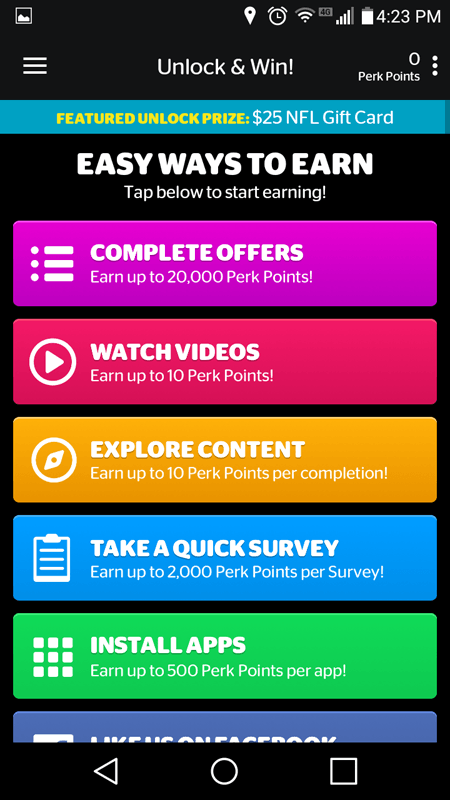 There were Perk Tokens, and Perk Points. At this point, I wasn’t sure what the difference was, but I was pretty determined to figure this out… so I put it on the back burner and proceeded to try out the app a bit more.

I realized that, at this point, I didn’t seem to have any points! Wasn’t I getting points for unlocking my phone?

I decided to try this a few more times, just to see if unlocking my phone was actually getting me anything. I also learned that I had a daily cap of what seemed to be 5,000 points… which seemed fair enough, lol.

Anyway, I tried the unlock screen a few more times to see if I could really detect any sort of a pattern to it. Here’s what I found out.

What Does The Unlock And Win Lock Screen Actually Get You?

I closed my phone and unlocked it again twice. Once I earned 20 Tokens, and once I earned 50 Tokens. A third time, I actually earned 4 Perk Points, which was awesome. The next time, though, I earned 10 Tokens again… and so on. There have also been some times where I unlocked it and got nothing… which was a bit unfortunate!

So, as it turned out, I was earning what seemed to be quite a few Tokens for unlocking my screen—but I still wasn’t sure what ‘Tokens’ even were. So I decided to look into that.

I had a bad feeling that Tokens weren’t going to be worth very much… but I didn’t want to judge the app before I knew for sure.

To figure this out, I had to go to the FAQ section of the app. Here, I quickly found out that Tokens are actually a currency used to enter sweepstakes in the app.

Alright—at this point, I will say that I had run into a few things about the app that I simply didn’t like. Here they are…

And just like that, I realized that this app pretty much falls prey to the same downsides that most apps like this fall to. They don’t really give you enough for your time to make them worthwhile.

In the case of the Unlock and Win App, the stats seemed to be even worse. You just couldn’t really earn enough to make it worth your time. I really couldn’t see how you could, unless you just got really, really, really lucky.

But you can’t find consistency with that, either. You cannot plan on earning a certain amount. And to me, that makes a difference.

My time is really worth too much to not be able to know that I have at least a decent chance of being able to affect my own destiny by spending more time or exerting more effort.

At this point, I decided that I had learned enough about this app to share my thoughts about it. Here is what I personally decided about the Unlock And Win app.

Will I Be Leaving The Unlock And Win App Installed On My Personal Android Phone?

My trial with the app certainly showed me some things about it that were helpful to know… and I was able to group my thoughts into a pretty basic pros and cons list. Here it is.

I am a bit torn about the idea of an unlock-screen app in-general. On one hand, I like the idea. I mean, you have to unlock your phone anyway… so why not get paid for it?

But then, on the other hand, the payouts are usually so minuscule that they are almost not worth any extra trouble.

But, on the same token, this app doesn’t present much in the way of ‘trouble’ because it really doesn’t take up much extra time.

So, in theory, even the smallest rewards are better than nothing, right?

Well, this is true to a point I guess. But even I have my limits.

In the end, this is an app that I would have to have on my phone for a long time before I could ever really expect to earn rewards. Granted, if you want to be patient, the Unlock and Win app will certainly earn you some prizes. I do not doubt that at all.

But for me, the deal breaker was the enormous amount of time it seems that it would take. Plus, the inconsistency of the Tokens. I know that this gives you some more chances to win big, but it doesn’t seem like an opportunity that you could count on. That’s also a downside to me.

So no, I don’t believe that I will be leaving this app installed on my phone. It’s not a terrible app at all—it just didn’t really give me anything that impressed me at all.

Honestly, if I wanted to use a lockscreen app, Unlock and Win wouldn't be my first choice. I had better experiences with some of the other options, like Adme and the SurveyCow Lockscreen App.

Our Final Thoughts About The Unlock And Win App