Can You Really Make Money With The Surveys On The Go App? 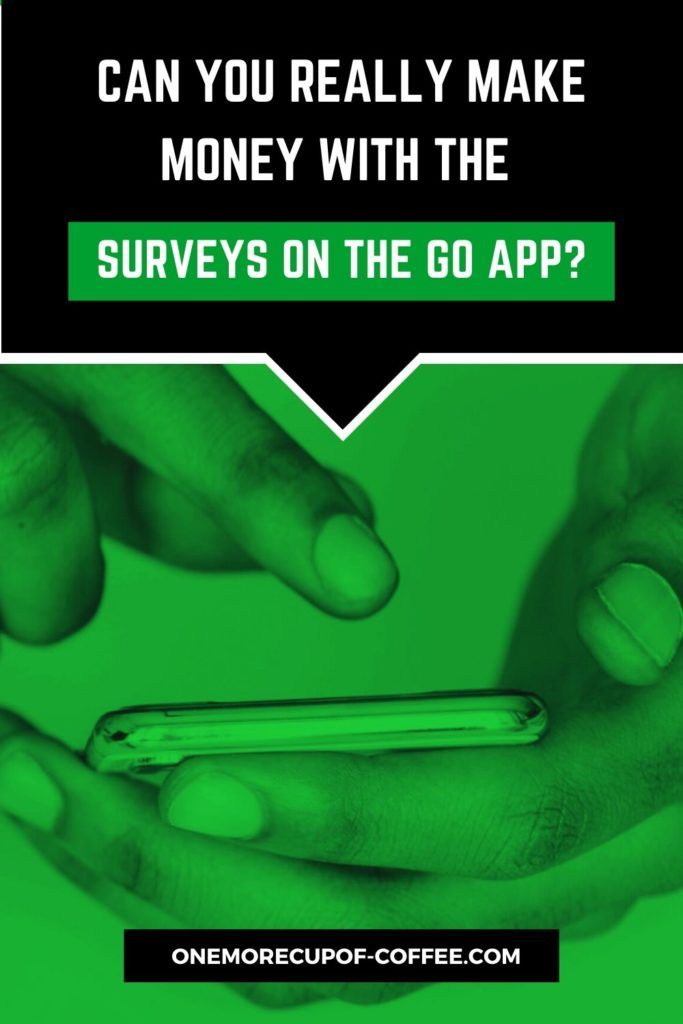 This is what I was determined to figure out as soon as I discovered it on Google Play… and in this review, you’re going to hear about my first-hand experiences with the app.

Is it all that it claims to be, or is it just a new chapter in a long list of disappointing apps that promise to provide an easy way to earn extra cash on the side?

Making Money With The Surveys On The Go App

My first step was to try out the app for myself. How better to learn about its functions?

Getting Started With Surveys On The Go

Surveys On The Go has been downloaded over 500 thousand times, and has a very good Google Play Rating of 4.4 stars. In the short description for it, it claims to be the ‘#1 rated/reviewed survey app.’ They also say that they ‘pay you CASH for your opinions.’ 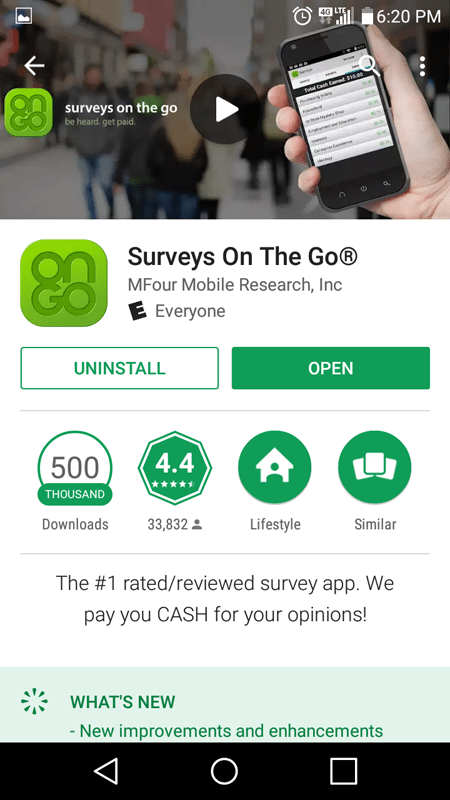 Here’s another quote from the read more section of the app listing. To be honest, I was intrigued when I heard this…

“Fortune 500 companies, the entertainment industry and companies around the country need your opinions – and we’ll pay you for them. Surveys On The Go is unlike any other survey application on the market today because it pays in cash, not points. You’ll earn real money for surveys you can take quickly.”

This seemed to do a good job of describing the major details of the app—but I was excited to open it up and get started. The sign-up/login screen was pretty simple. I logged in using my Facebook, which is pretty normal for apps like this, and makes the process easier.

Logging-In To Surveys On The Go

First, I had to review the terms and conditions—which were quite long, to be honest. I clicked the ‘I agree’ button after reaching the end of the page, and proceeded on to what seemed to be the hub of the app.

Here’s a screenshot of what I found. 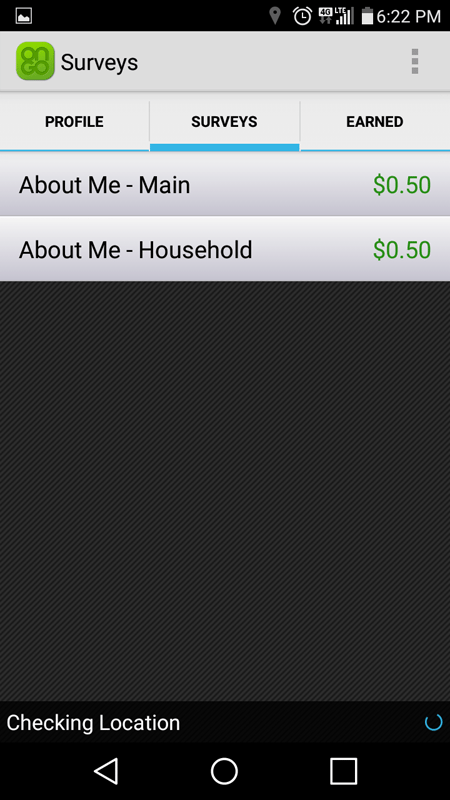 Here, I could click on three main tap options: profile, surveys, or earned. It seemed like I had two surveys that I could take part in right away, actually—and it looked like each one of them would earn me $0.50.

I was already really excited that this app rewarded me in real cash instead of points—but I was also already a bit leery of the fact that I didn’t have any more survey options than just these two.

Was this going to be one of those survey apps that didn’t give me very many survey options? Was I going to be able to take enough surveys to make it worth my time?

These were the types of questions that were on my mind—but I’ve also learned, with reviewing similar apps, that you sometimes need to conduct these introductory surveys to see what other types of surveys you qualify for—so I was holding out hope that more surveys would pop up after I completed these.

But for now, it was time to get to work. I was going to do both of these surveys, and then figure out what was going on after that.

Completing The Two Introductory Surveys With Surveys On The Go

I clicked on the About Me – Main survey first, and was instantly greeted with this screen. 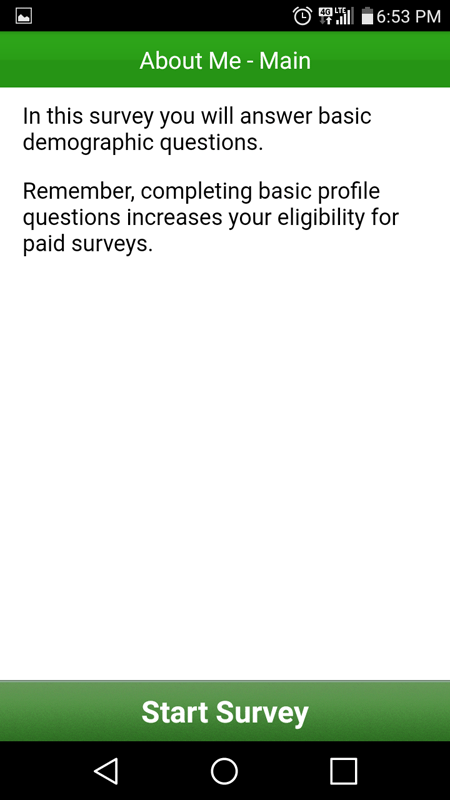 As I had suspected, completing this survey may indeed qualify me for more surveys on down the road—so I was pretty pumped to get started on it.

This first survey was pretty easy. They just asked for basic information about me, such as my ethnicity, my gender, what country I lived in, what state I lived in, my annual income, what type of job I had, my employment status, etc. These were all pretty typical survey-type questions, in my experience—and they didn’t surprise me.

They weren’t overly invasive, but they did ask the types of questions that one would need to ask to determine my place in society.

Next, I moved on to the About Me – Household survey. This survey asked some rather interesting questions… unlike any that I had really answered in a survey before.

For example—they asked how many children I had, which was typical—but they also asked me what my parenting style was, and gave me like four pretty broad options to choose from.

At any rate, I finished the survey—and quickly realized that I had no more surveys to do.

Since this was the case, I put the app away for a while (about 4-5 hours or so) and waited to see if I would get any more.

I logged back in after waiting, and still had no new surveys to take. (Note: The app dinged my phone twice during this time, but by the time I got back to a place where I could check the notifications, they were gone… so I have no idea what they were.)

Wondering if this was a common occurrence for other users, I took to the Google Play store reviews to see if I could find any additional information.

After reading through the Google Play Reviews, I learned 3 things about this app.

1… A lot of people really like it in the sense that it’s a no-nonsense app that will help you to make some extra cash. They like that it seems to be all business, no runaround—and that gets it high marks.

3… Some people have said that the app has some technical glitches in it in regards to submitting surveys. Some have also said that there are quite a few incidences of surveys ‘not qualifying,’ which means that they only make $0.10 instead of the actual survey amount because, after starting and filling out at least most of the survey, it turns out that they don't qualify for it.

Here is a quick screenshot of some typical review results that you’ll find in the listing. 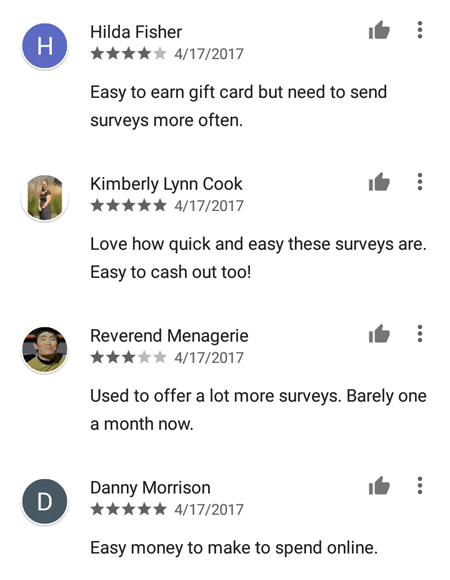 After reading through the Google Play Reviews for Surveys On The Go, and after giving it a try myself, I came to what I believed was a pretty solid conclusion about it.

Can You Earn Enough On Surveys On The Go To Make It Count?

You need to earn a total of at least $10 before you can actually cash out on Surveys On The Go. 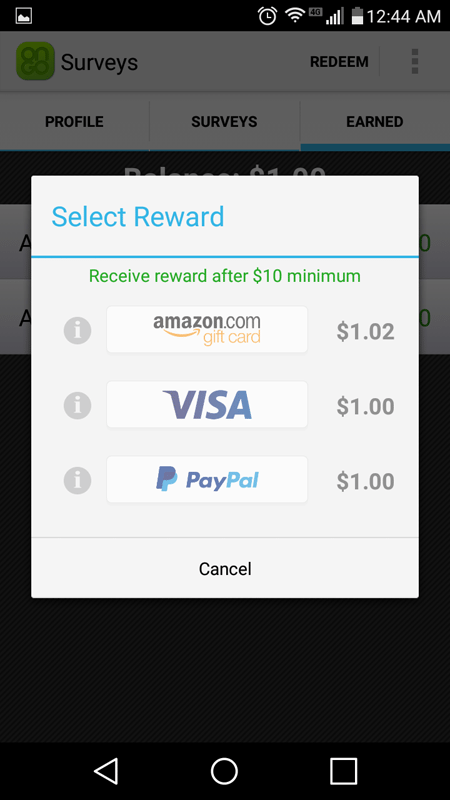 But did I feel that the app was worth the time? More importantly—can you really make money with the Surveys On The Go App?

Here’s how I feel about it, after giving it a try and reading up on what other people have experienced.

First of all, I feel that this app is certainly a quality app. The company does a great job of keeping things simple. The surveys seem easy enough, the app technically works like a charm (it did for me, anyway), and it seems like it pays you really well when there are surveys to take.

I also really liked how the app goes ahead and does everything in actual dollars instead of some weird point conversion system. That part is pretty awesome.

But, it isn’t all good with Surveys On The Go. There aren’t many surveys to take, from the sound of it.

Maybe people who live in larger cities have an easier time finding surveys, but I certainly didn’t find many after downloading it and using it for a day, and the Google Play reviews seemed to suggest that my experience was not altogether unique.

A lot of people had similar complaints, and that seems to be the biggest downside to the app.

Is it a good money maker when there are surveys to take? Absolutely.

Will you find enough surveys to make it viable?

That question is a bit more difficult to answer.

You will probably be able to earn $10 over the course of a few months or so, and then cash out. And doing so might not even take you that long—but you will need to be patient, as the surveys don’t necessarily come in a grand abundance on this app.

Does this make it a no-go?

I’m afraid, for me, it wasn’t worth leaving on my phone. I actually liked it a lot, but I couldn’t justify leaving it up when I wasn’t going to have stuff to do on a daily basis.

I could do too many other things to make extra money, and I could use that extra space on my phone for other, more profitable apps.

If you are looking for survey apps or sites, there are other interesting ones to try out too, such as Survey Junkie, Swagbucks and YouGov.

Our Final Thoughts About Surveys On The Go

The Surveys On The Go App Review