Can You Really Make Money With The TV Viewing Research & Rewards App, From Media Insiders? 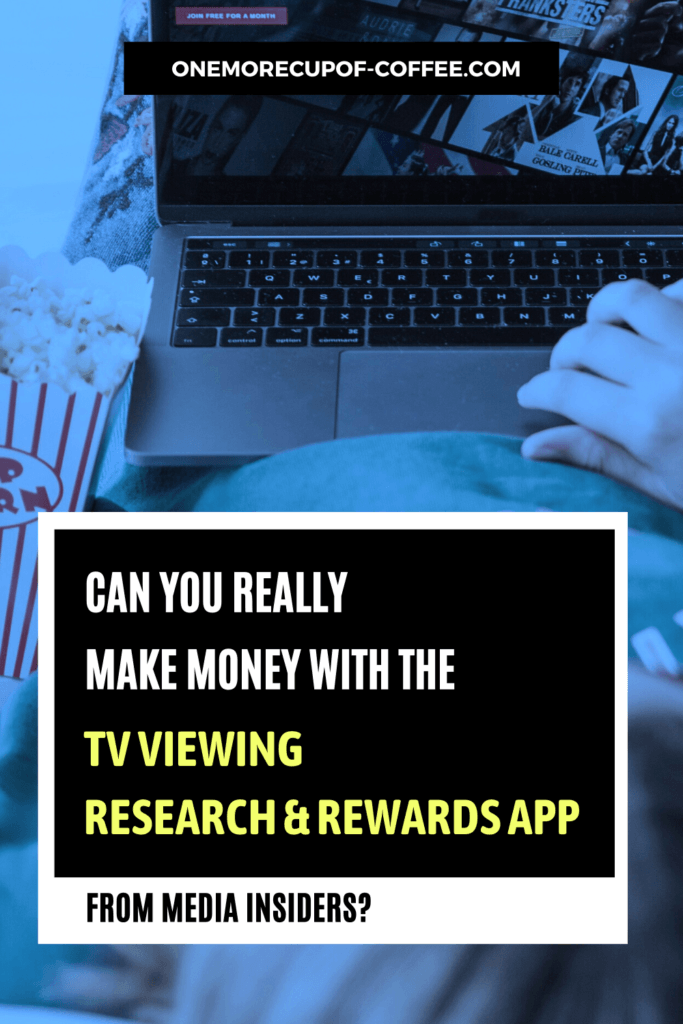 This app, which is also known as the ‘Media Insiders’ app, or the ‘MI Mobile App,' is said to give you rewards for telling the company, through surveys and the like, about what you’re watching on TV.

But can you really make money with the TV Viewing Research & Rewards App? And can you make use of it if you aren’t using cable, DirecTV, or some other type of TV service?

As you likely know, I like to find ways to make extra cash. And I always prefer it if I don’t have to do a lot of other ridiculous stuff for it! Apps that help me to easily earn a few extra bucks here and there are among my favorite ways to stash away a little more ‘green’ every month… but did the Media Insiders app prove to be worth my time?

This is what I wanted to find out, so I downloaded it and decided to give it a try.

The first thing I did was look the app up on the Google Play Store. It’s had over 100,000 downloads, and has been reviewed by over 1,800 people. But it only has 3.6 stars in the Google Play ratings—which isn’t that great, to be honest. 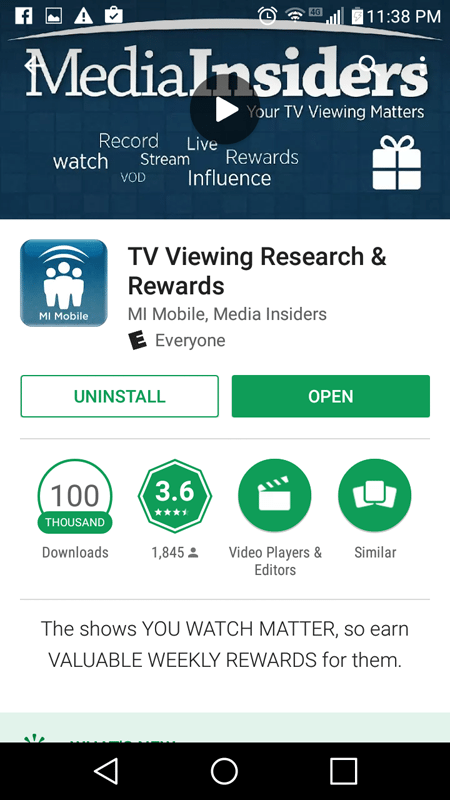 I watched an introductory promotional video for the app though, which you can find in the Google Play Store at the top of the app listing.

You can also find the video here on Youtube. It did a pretty good job of explaining what the app does, but what I was the most happy about was that I could use the app with Netflix—because I don’t really watch any TV at all outside of Netflix.

I feel that Netflix, services like Hulu, and even Youtube Red are probably the wave of the future where TV is concerned—so the fact that this app would work with Netflix really did a lot to increase the value for me right from the beginning.

But is the app itself any good? How does it work?

And most importantly, can you actually make money with it?

Here’s what I found out as I pressed onward.

When I opened it up, I had to click ‘accept’ on what seemed to be a normal terms and conditions page. Then, I was taken here. 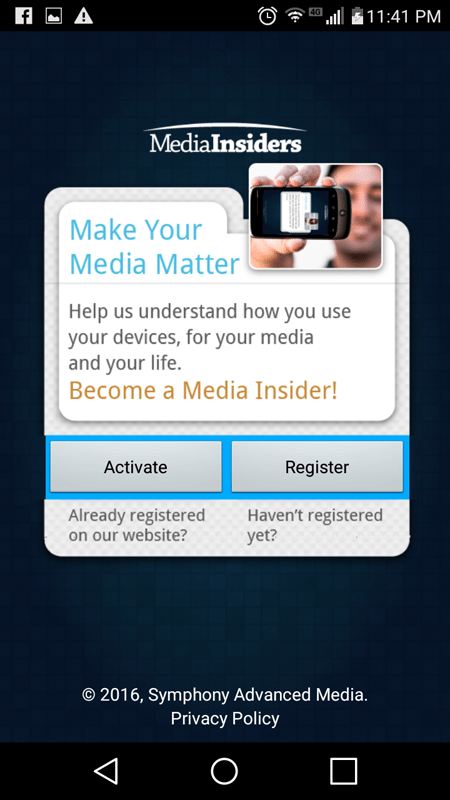 I hadn’t registered yet, so that’s what I decided to do next.

Registering With The Media Insider App

I clicked on the Register button and was taken to a page that asked me some basic questions about my gender and my age. But on the very next screen, I encountered this… 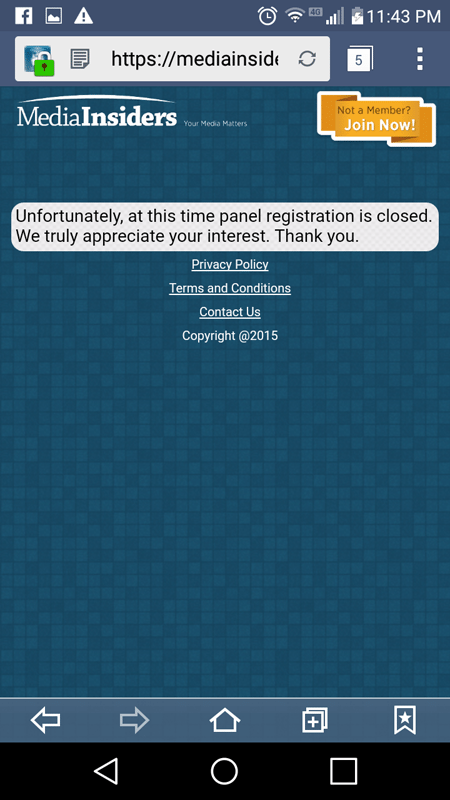 Needless to say, this left me feeling a bit less than excited. But, I didn’t want this to end my research. If registration were to open back up, then I would want to know if this app were still viable… so I decided to turn to the Google Play reviews to find out more.

I did quite a bit of research in the Google Play Store reviews, and found a lot of useful information to help me figure out if this app is really worth the time to download.

First of all, I found out that quite a few people seem to have technical-type issues with the app. These issues, as common as they seemed to be, almost made me feel like the app just might not be worth it, based on nothing other than how much time and effort it may take to use it.

But after I continued reading, I realized that this might not be the fairest assumption.

Customer service, on the Google Play side of things, anyway, seemed to do a good job of responding to negative comments. And sometimes, it legitimately seemed like the users might have been at fault with the problems… so the blame for such incidences probably doesn’t rest solely with Media Insider.

I also noticed that quite a few people seem to have issues with it not working as well with streaming as it does with regular TV, as evidenced by reviews like this one… 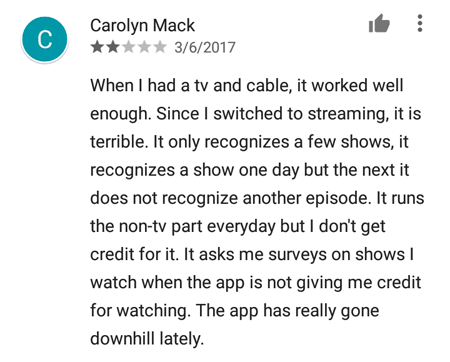 I also found quite a few reviews where people complained that the app doesn’t pay out as well as it used to. Reviews like this one seem to evidence a sense of customer dissatisfaction as it pertains to how much you can make from the app nowadays, after they have changed some of their pricing and reward policies… 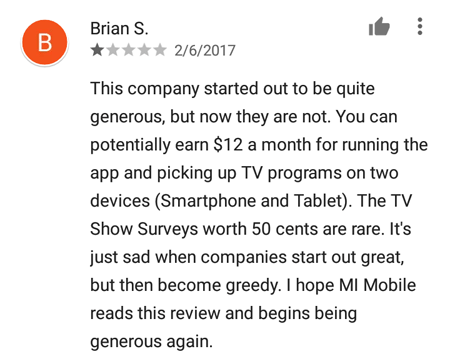 But we also found quite a few positive reviews as well. This review seemed to do a good job of describing for us how much you can potentially earn when you use the app diligently. This review indicates that over a period of 3 to 4 years, the individual who wrote the reviews made approximately $650—which is actually pretty good for extra cash! 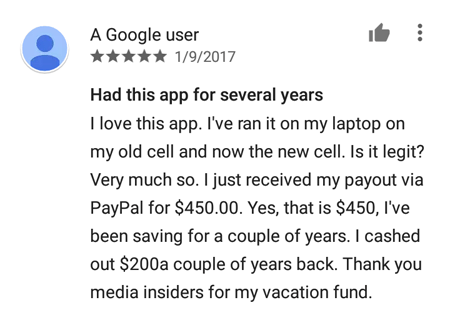 Here’s another review that seems to paint a decent picture of how much you can make using the TV Viewing Research And Rewards App. 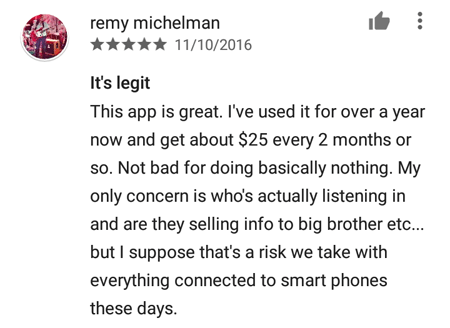 This review says that the writer made about $25 every two months, which adds up to about $150 per year… which still isn’t bad.

This would add up to somewhere close to what the other review, which we discussed above, said that that user made using the app—so this seems to be some pretty consistent, correlating data that we can at least assume is, for the most part, doing an accurate job of showing us what you can make if you stick with it and keep using the app.

Can You Make Enough Money On This App To Make It Worth Your Time?

Based on everything that I’ve read, seen, and experienced in regards to this app, I feel that I have some good things and some bad things to say about it.

First of all, the fact that I couldn’t register is obviously a bit of a downside. This kept me from even having the option to use the app.

But… the fact that it has a closed registration also tells me something good about it. If they will only allow so many people to use the app, then they are probably going to keep paying out decent amounts and rewards for participation. So, if someone could actually get registered and onto the app, they could stand to make a bit of extra cash.

I did feel that it sounded like a lot of people had technical issues with the app… to a degree that would make me a bit leery. I am not a fan of apps that don’t work right. But at the same time, customer services seemed pretty good with this company—so that is something to take into account.

The cash that the company pays out does seem to be worth the time, and many of the Google Play reviews back this up. It does sound like people who watch TV or Cable, however, have a better experience with it than people who, say, stream Netflix.

For that reason, I would probably choose not to use the app, because Netflix is pretty much the only real ‘TV’ that I even watch. That’s where I watch all of my shows, and I’m not at all interested in paying for Cable or satellite (commercials… are… the… WORST THING IN THE WORLD! I will NEVER go back. I refuse!!!).

But for someone who watches mostly normal TV, cable, or satellite, this app may be worth the time. You might face some problems, and you may find yourself needing to contact customer support at some points. But as long as you are ok with that possibility, there really isn’t a reason why this app shouldn’t work for you.

I will also say that this app isn’t necessarily giving away free money. You are, in a sense, working for it. But, the work is super easy and consists mainly of surveys. If you like taking surveys and enjoy watching TV, then you are most of the way there already. This app will just put the icing on the cake.

Will I be leaving it installed on my phone? No… mostly because I only use Netflix. But that’s not to say that it wouldn’t do a lot of good for someone else.

There are other apps out there that pay you for watching videos – where you are basically viewing ads. Perk TV, Super Cash Rewards and Tap Cash Rewards are examples but honestly, that style is evey worse than the TV Viewing Research & Rewards app.

Our Final Thoughts About The TV Viewing Research & Rewards App