Can You Really Make Money With SurveyFreedom.com? 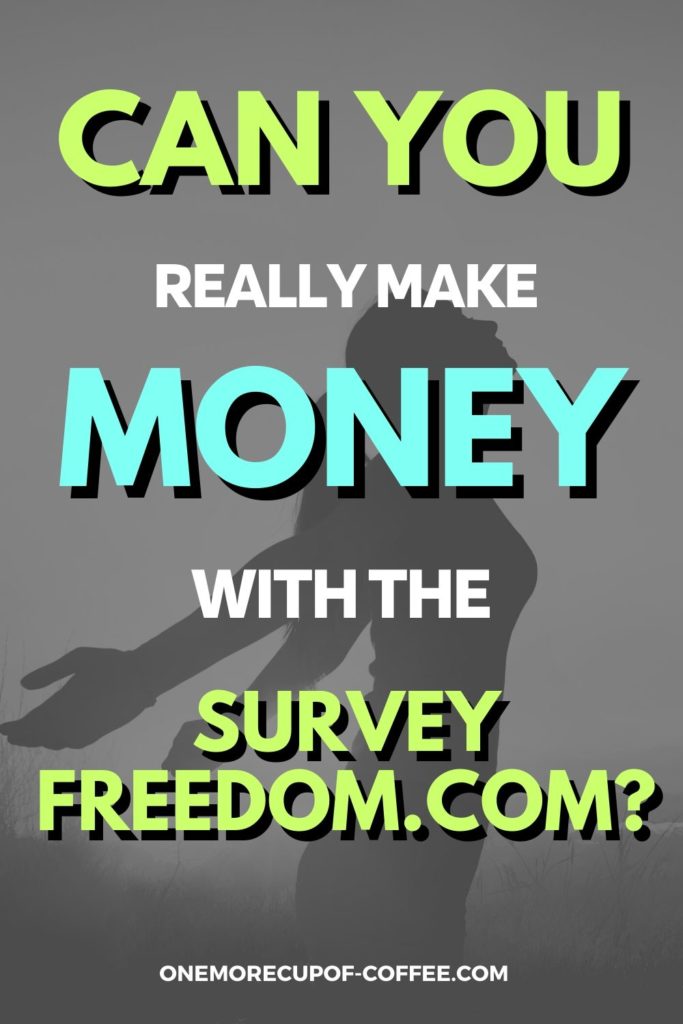 This is a website that I came across as I was researching new ways to earn money online. At first, I was quite impressed with it—though I did come across a few issues as well. But can you really make money with SurveyFreedom.com, or is this just another thin survey website looking to get surveys completed for pennies?

This is what I was determined to find out.

I really like the idea of taking surveys and getting paid for them because this represents a side-hustle opportunity that almost anyone can participate in.

But at the same time, I have not had the greatest experiences with websites like this in the past, mostly because they seem to be pretty ‘cheap.’ Usually, websites like this just do not pay enough to make them worth the time… but that is also understandable, to a certain degree.

Since anyone can take a survey, there is not as much of a ‘dire need' for survey takers. So, the supply is higher than the demand… which drives down the amount that you can make taking them. 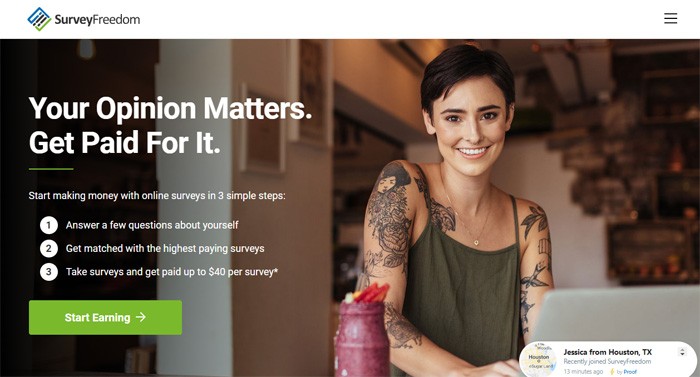 But, then again, one of the best things about surveys is that anyone can take them. They are also usually pretty easy and do not require any kind of monetary investment. They can also be taken at almost any time of the night or day—giving the person taking them a lot of freedom.

Surveys can pretty much fit in anywhere around your schedule. You can do them in line at the doctor’s office, while you are waiting on your kids in line at school, while you are bored at home, while the commercials are on, etc. Also, generally, as long as you have some kind of electronic device, you can take surveys and make money doing it.

But what about SurveyFreedom.com? I actually found out about this site through a sponsored Google advertisement, and surprisingly I had never heard of it before now. Let’s take a closer look.

A Closer Look At SurveyFreedom.com

SurveyFreedom.com starts off pretty easily. You answer a few questions about yourself, get matched with the ‘highest paying surveys,’ and then take surveys to get paid up to $40. Note that not every survey pays $40. They say that most of them pay between $5 and $15, but even that is still pretty good.

But… I very quickly noticed something weird about this site. Take a look at this. 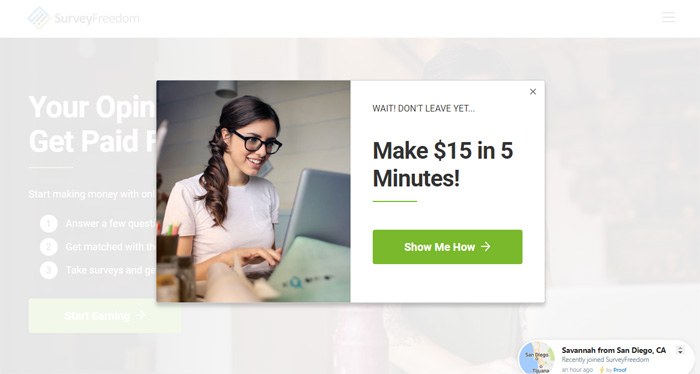 Every time my mouse left the browser screen to access the tabs above, this would pop up. And I don’t mean just the first time. It literally popped up every single time.

It was actually pretty annoying until I got used to it. I feel like this was a design flaw on the website. I think that someone really made a bad choice by choosing to design the page with this kind of a mechanism built into it. It borders on being spammy, and I was not impressed.

I would probably have exited out of the site right then and there to be honest, over the fear of getting spammed even further—but the entire point of this was to try out the site, so I stuck with it.

At any rate, I decided to go ahead and follow this little popup down the rabbit hole. Here is what I found.

Following The Popup On SurveyFreedom.com

The popup had a button that you could push to find out how you could make $15. So I clicked on it. And this is where I ended up. 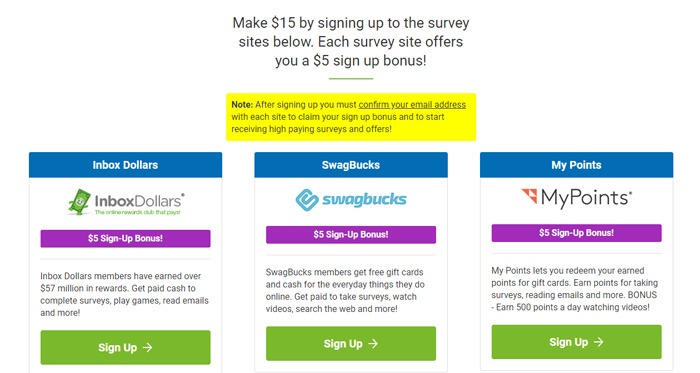 So this is where things started to take a bit of a downward turn for me. I have tried every single one of these offers, and have not been super impressed with any of them.

I also recognized this type of approach to survey taking, and it is not new. This website supposedly got its start in 2018, making it quite new to the online survey-taking marketplace. But as it turns out, it is simply not much different, thus far, from other survey companies.

There are some survey companies that try to earn money by building off of what other survey sites are offering. They re-brand the survey experience in their own way and try to get people coming through to sign up for other offers at the same time.

This earns them money and gives them something to offer the random passing internet browser… hoping to make some cash.

And while it might seem like a good deal, it usually isn’t quite as good as it seems. Many of these sites don’t just send you $5 for completing the offer. They give you $5 on your account but require you to have more before you can withdraw it. And earning cash on these types of sites tends to be tedious, at best… so yeah, it is just not altogether an awesome experience.

But I was still willing to give SurveyFreedom.com the benefit of the doubt. So I went back to the landing screen, started the review process, and answered questions for them.

They asked me what my gender was, how much time I wanted to devote to surveys each week, how much I wanted to earn per month, etc… and then said that I matched with over 3,000 surveys and 3 different market research companies.

All they needed now was my email address and my first name.

I filled these things out and was pretty much taken right back to the screen with the offers for different survey companies that I could sign up with. As it turns out, SurveyFreedom.com is not really a new concept at all, as I had hoped.

Instead, at this point, it seemed to be another cookie-cutter example of a survey site that just sends people through the same rabbit trails as countless other survey sites.

What I was hoping to see was a survey site that was doing things in new and different ways. But thus far, it certainly seemed like I was going to be disappointed in this wish.

I did do a bit more looking around, though, just to see what else I could find. I was still hoping that maybe I was overlooking something.

I dug a bit deeper into the website, just to see what else I could learn. I found out that it was started early in 2018, with the goal of helping people to make extra money from the comfort of their own home. They also say that their research partners they connect you with, through their site, payout cash for your opinion.

This was pretty much telling me what I already knew. But it did little to stem the tide of my disappointment. I have not had a lot of luck with survey websites, mostly for this specific reason.

It is so hard to make meaningful, decent amounts of money taking surveys online that it is virtually not worth the time. Yes, some people do make pretty good money with it… but you have to stay consistent and use many different sites at the same time.

Websites like SurveyFreedom.com are actually useful in this way because they can help you to sign up for multiple different survey sites all at the same time. But then again… they are hardly the first website to take this approach.

My Personal Feelings About SurveyFreedom.com

Personally, I have never been a huge fan of survey sites, mostly because I don’t feel like they are truly worth the time. There are a lot of side hustle opportunities out there that are worth a lot more money for how long they take, and those are the opportunities that I would rather pursue.

But… with that being said… there are still a number of positives about this site, and other survey sites, that are difficult to ignore. First of all, websites like this allow you a lot of flexibility.

They also allow you to use multiple different survey sites at once—which really increases your odds of being able to make money. And finally, they give you access to a greater number of surveys overall—meaning that you will be less likely to run out of work quickly. That can actually be an annoying problem with some survey websites.

You can also try signing up for survey sites individually, including options like SurveyMini, Esearch, Pinecone Research, and Tellwut.

In the end, it is important to keep in mind that there are probably better ways to earn five, ten, or fifteen dollars. But if you need something truly flexible, you might be hard-pressed to find something quite as easy to get into as survey-taking.

It won’t make you rich, but you might be able to earn some gift cards or cash with it… and that is pretty valuable in its own way.

Our Final Opinion Of SurveyFreedom.com

Can you really make money by taking surveys on this website?