Can You Really Make Money With Purium? 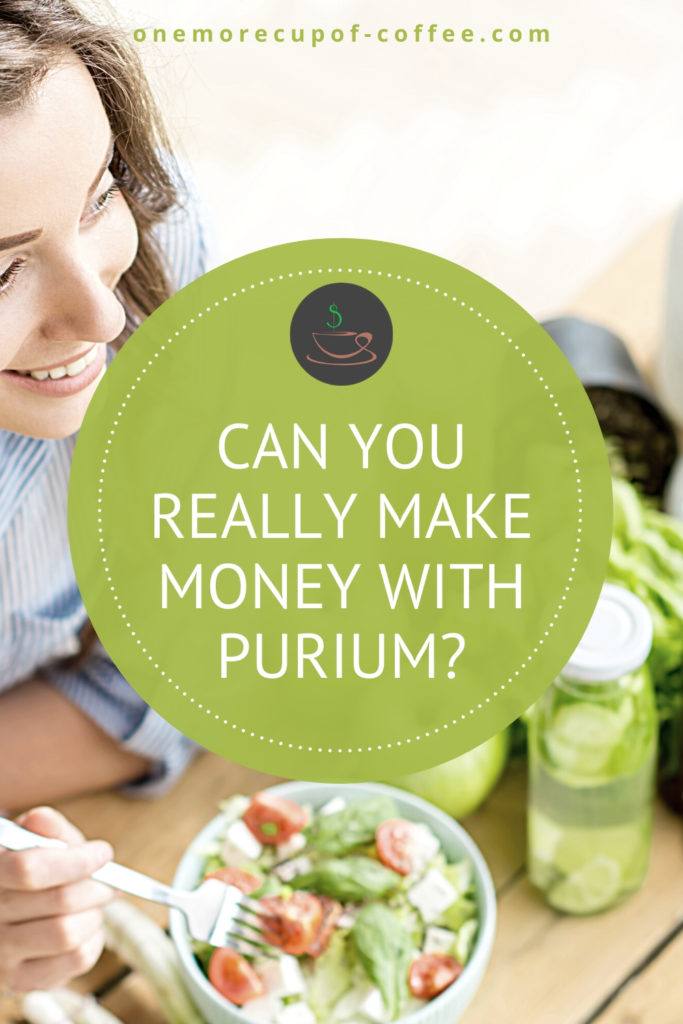 Purium is a health company, one that heavily focuses on the idea of clean and healthy products. This idea is seen consistently across their marketing and the items that they sell. It's even possible to bury some of the packagings, as it will decompose.

I have to admit that the marketing angle works well. There is currently a high demand for natural products and Purium plays into this well. The marketing alone helps Purium's products to stand out. A good salesperson could really make the company shine.

The focus on health has some advantages too. Countless people want to improve their health. Some will make lifestyle changes to do so, but many others will look at supplements and other products for solutions.

Health products tend to be consumable. This is ideal for sales, as customers need to come back when they want more products.

Then, of course, there's the whole fact that health products are never exactly the same as each other. This makes it difficult to directly compare products to one another, especially as many health outcomes aren't easy for customers to see (like ‘more energy' or ‘less inflammation'). As such, you don't need to be promoting the best products, simply ones that are good for their price.

On the other hand, the health industry is incredibly competitive. Countless companies are competing for the same audience. So, does Purium has what it takes to be successful?

Making money with Purium is exactly what you might expect. Like most MLMs, you are able to make a commission from product sales. You can increase your income potential further by building a team as well.

As well as considering those two areas in this post, we're also going to look at how Purium works overall as a way to earn.

The best way to describe Purium would be to call it a health company. But, that’s a little simplistic. As the name suggests, Purium focuses on items that are pure. Or, at least, their products try to be as natural as possible. The company describes their goal like this:

The idea isn’t actually that unusual but it is incredibly popular. The actual products fall into the following categories:

If you’ve looked at similar companies in the past, you’re probably already familiar with the types of products. For example, the Cleansing area includes fiber and aloe supplements, along with powders for shakes and for green juice.

The items are fairly expensive, especially as you can buy similar-sized containers of protein shake for roughly a quarter of that price. There are some packs too. These may reduce the price per product, but the cost of buying a pack is high.

For the right audience, these prices may not be a problem. Companies that focus on clean and pure products to tend to charge more for their items. And, as expensive as these ones seem, they’re actually not that unusual. Many other companies use a similar pricing structure.

To a degree, the prices may even help. Higher prices don’t mean that a product is better but many people still use price as an indicator of quality. So, the prices could make the products seem more appealing. You do also earn percentages from sales. When the prices are high, you can make more money for fewer sales.

Of course, the obvious catch is actually making those sales.

The products are expensive enough that many people wouldn’t be able to afford them. And honestly, there is little to justify the pricing. Sure, these are clean and green products. But, there are many other such brands out there as well, some of which offer cheaper options.

I’m not convinced that the Purium products would be competitive enough to let you find long-term success.

One final thing to mention is reviews. It’s tough to find objective reviews for any MLM, as there are so many distributors out there. Even so, the reviews I found suggested that the products are popular enough.

The products from Purium are interesting and may appeal to the right audience. This aspect alone means that you can make money. But honestly, that’s not the question. Instead, we need to look at how well Purium works and whether it is a good source of income.

First off, members earn a 20% commission on all orders that customers make. This is a low commission rate for the industry.

There is also a bonus of $50 for every $1,000 in customer purchases. This doesn’t dramatically increase income but it does help a little.

The main exception is that members get 25% commission for the first purchase of any distributors that they recruit.

Customers also seem to be ordering through the company, so you don’t have to purchase stock and then resell it. If you managed to get passionate customers, you could potentially get regular orders from them with relatively little work.

The next aspect to consider is recruitment. Purium falls into the category MLM, which stands for multi-level marketing. This style means that you’re trying to recruit a team of people and earn money from their success.

This is sometimes viewed as passive income. After all, you’re earning from sales that you have no direct involvement in. But, it’s not completely passive. Instead, you have to put the work into building your team and also maintaining it. The larger your team gets, the more complex that process becomes.

Purium uses something called a unilevel system to pay team-based earnings. This means that people are placed in your downline just based on how they are recruited. It breaks down like this:

If you were a distributor, those levels relate to you. So, the person who recruited you would have different people in each of their levels.

With this system, you earn a percentage of what each level earns. In most MLMs, that percentage decreases as you go down the levels (a handful do the reverse). Purium is unusual, as the percentages stay at 5% in almost all situations. 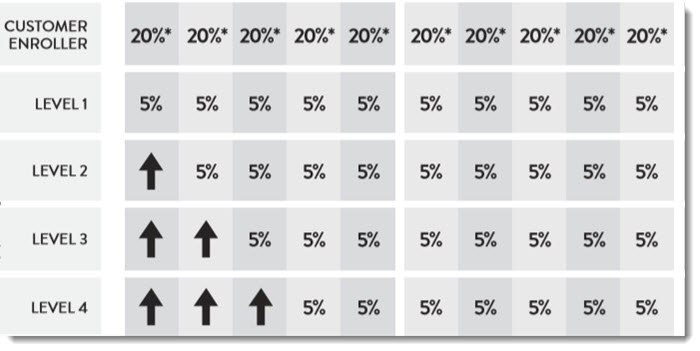 Even then, the percentages remain consistent regardless of your rank in the company. I like how this makes the plan much simpler to follow. That’s always great for beginners.

The totals also add up well. Many sites offer lower rates, especially at the deeper levels.

Practically, these numbers may not seem like much. They’re only small percentages of what others earn. But, they are based on the sales of your entire team. So, if you could build a large downline, the potential income is considerable.

The design even means that the number of people should increase as you go down the levels. For example, if you recruit three people, they recruit three people and so on, the system can build quickly. Again, if you’re effective, the potential is considerable.

I’ll come back to how realistic that all is shortly.

A key part of the plan is the idea of ranks. Most MLMs do something similar. Purium has 17 different ranks, broken down into three categories. The income potential increases across these categories, as do the requirements.

For example, the recruitments for the first five ranks are fairly simple and look like this: 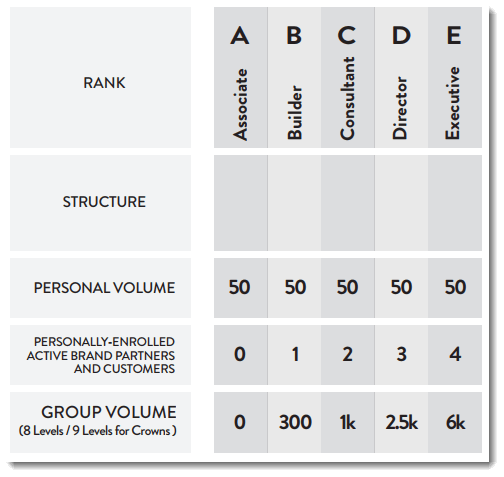 The group volume increases dramatically as you go across, but everything else remains simple. You just need to increase the number of people you have enrolled. It becomes more complicated after this. For example, the next of ranks have the following requirements. 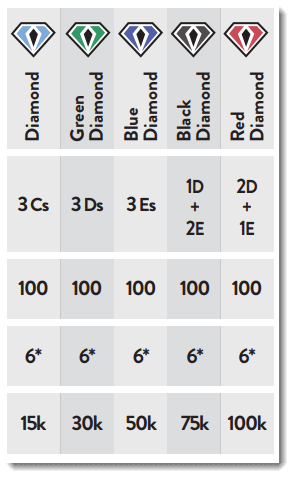 Chances for income increase with ranks. This means that if you want to succeed, getting through at least the first few ranks is essential. Ideally, the further you go, the better your outcomes.

There are also other aspects. For example, the Diamond ranks and beyond offer matching bonuses, along with lifestyle bonuses. They also earn from a small percentage of the business volume across the entire American side of the company.

The high-level bonuses sound amazing. But remember, you need to progress far in the company to reach them.

Despite the complexities of the model, Purium does have some advantages too.

The first is location. Many MLMs only let you sell within a single country, like the United States. Purium sells to 30 countries and recruits from any of those countries can be included in your downline.

Most people probably don’t have the connections to try and promote overseas. But, this does mean more potential for growth, especially if can recruit someone in an untapped area.

There is also no membership or autoship component to Purium (although there was in the past).

This means you don’t have to focus on getting people to join memberships. Likewise, you only have one type of customer to worry about, rather than two. I prefer this, as autoshipping and memberships add a layer of complexity that you simply don’t need.

Can You Generate Reliable Income With Purium?

There are many aspects of Purium that sound amazing. If nothing else, you can make a decent income, providing you create a large enough team. The real question is whether Purium is realistic.

MLMs can sound easy at first. You're promoting products that you love, ones that have some genuine advantages in the market.

Even so, getting people to buy regularly is difficult. You don't just need to convince them to spend the money. You also need to show them why they should focus on Purium products above all the other options.

Honestly, people who work on sales for a living struggle at times. You'll probably find things harder, especially at first, as you're not getting dedicated training on how to be effective as a salesperson.

That's just focusing on the sales aspect. Team building is more complex still. You need to get people to commit time and energy to the process. You also want them to be successful.

These aspects make Purium a poor choice unless you're confident. It would be very easy to spend a lot of time and get nowhere with the company.