Can You Really Make Money With The Perk TV App? 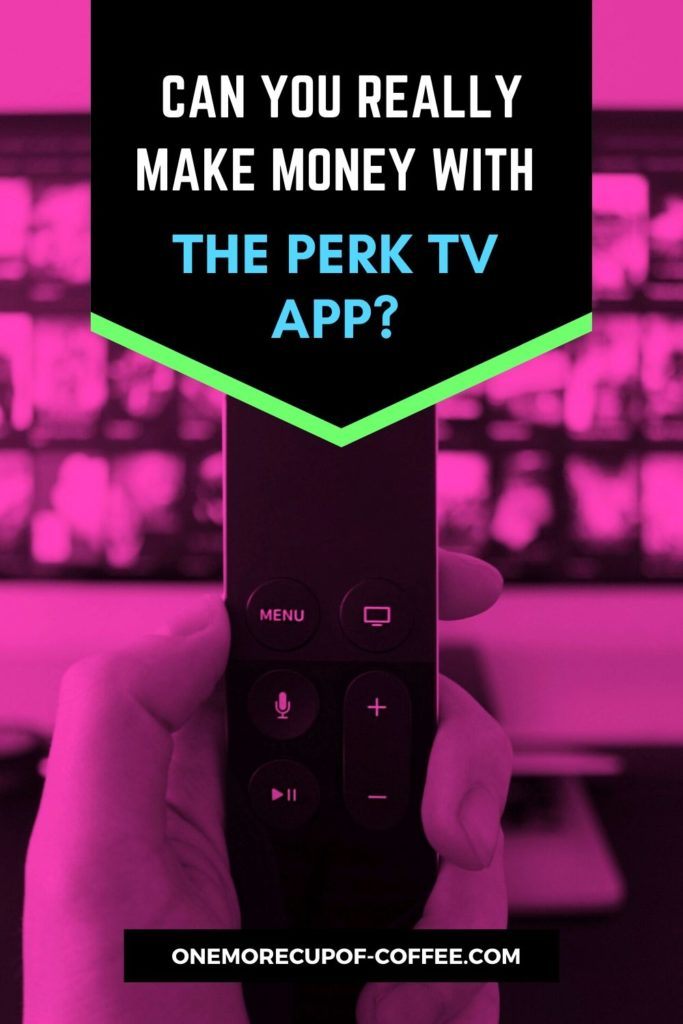 Do you enjoy watching videos? Do you enjoy making extra side-cash? If so, then this app (in theory, anyway) might be for you. But can you really make money with the Perk TV App?

I’ve reviewed a number of these types of apps in the past (including Super Cash Rewards, AppTrailers and Tap Cash Rewards), and in all honesty, most of them have fallen short. I have yet to find a really good app that rewards you sufficiently for watching videos.

Either they have tended to be too glitchy, have not provided enough in terms of rewards to make them worth the time, or have been so uninteresting that they just turned me off because of their content.

But will Perk TV be different? I would consider myself a fair app-connoisseur… so I was determined to get into it and give it a try in order to find out. Of course, every app is different, so naturally I was looking forward to what Perk TV might offer that would make it stand out from the crowd.

So I downloaded it and got to work. Here’s what I found, starting with the app itself.

Looking At Perk TV In The Google Play Store

Here is a look at the vital stats for Perk TV in the Google Play store. 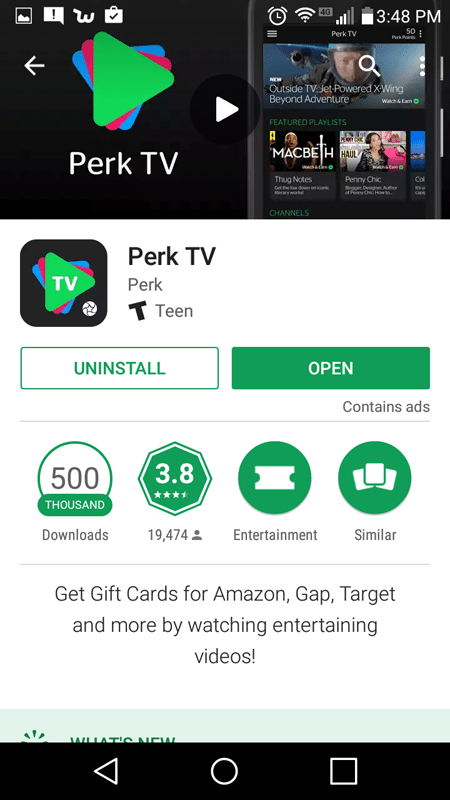 It has been downloaded about 500 thousand times, has a rating of 3.8 stars, and has been reviewed by almost 20,000 people. So as far as an audience goes, this app has quite a following.

As far as the rating goes, 3.8 can tend to be promising. It’s not the best—but I’ve reviewed some really good apps with similar ratings—so this certainly isn’t a deal breaker, by any stretch of the imagination.

As you can see from the screen shot, the tagline for the app is “Get gift cards for Amazon, Gap, Target and more by watching entertaining videos!”

This was pretty self-explanatory to me. The next step was obviously to open the app up and get started with it. So that’s what I did next.

Opening Up Perk TV For The First Time

Opening up the app for the first time took me to this screen. 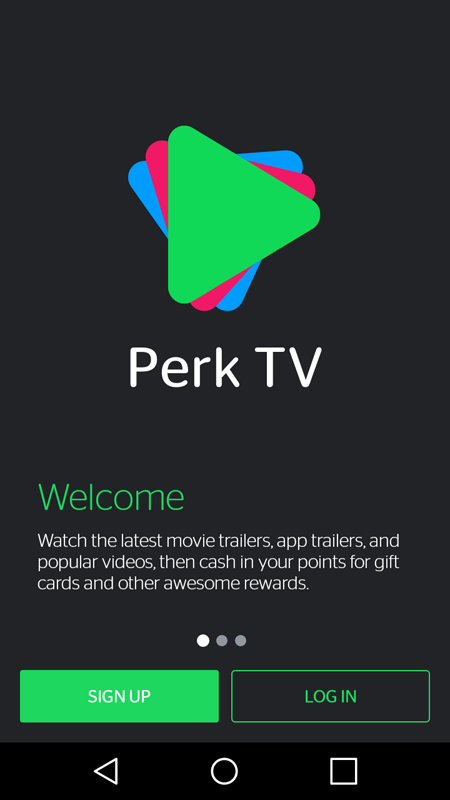 This was the first in a series of 3 screens that basically told me what the app did. These screens didn’t necessarily tell me anything that I didn’t already know… other than that they did say that Perk TV had already awarded more than $28 million in rewards to their members.

That’s a lot of cash… and it certainly got my attention.

So next, it was time to figure out if the app was a viable way for people like me to earn extra cash.

Next I was taken to this screen—which seemed to be the main ‘hub’ of the app. 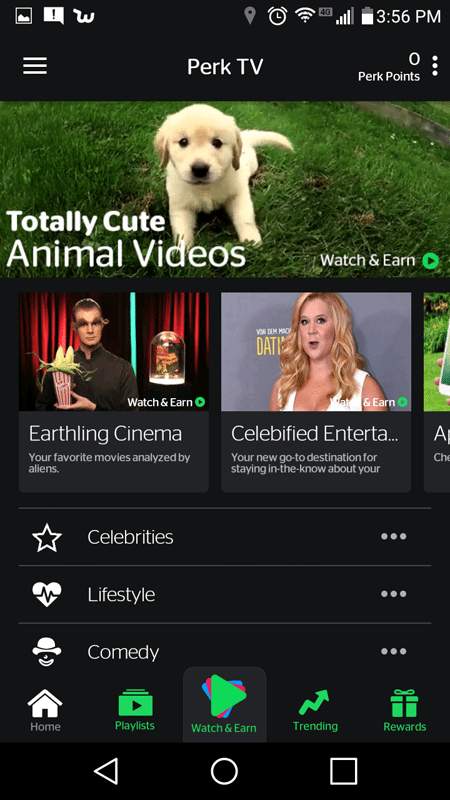 Now, it was time to take a look at exactly how the app operated—so I gave it a trial run. Here’s what I learned.

First, I tried to load and watch a video… but this proved more time-consuming than I thought it would be. First, these pop-up ads would pop up, and I would need to exit out of them before I could see the video—but then the video wouldn’t play, so I would have to click it again, and then another popup add would appear.

I did this three times before I finally got the video to play. Then, when the video did start, there was a video ad before it!!! This seemed ironic to me.

I don’t know… maybe I’m being overly sensitive, but I just feel like I shouldn’t need to wade through pop up ads and TV ads to view the video that I am supposedly getting paid for.

So I watched the video, which was like a weird show about these two guys on roller coasters. I imagine that they were paying for this view, which is how the app makes money, and I assume that I am getting paid a small percentage of that payment for watching (small doesn't begin to describe it… but I will talk more about that in a moment).

The video was over 3 minutes long. I was not entertained by it. I don’t want to be a jerk, but it was a waste of my time. So the entertainment value was pretty much zero for me.

But, I was very pleased to see that I was awarded 1 Perk point for completing the video! That made me pretty happy—but before I could do anything else, I was directed to another video, and I didn’t click soon enough to exit—so I was forced to endure more pop ups and video ads before another video loaded and started playing.

I repeatedly tried to get out of it, but no matter how many times I pressed the back button, it wouldn’t stop. My only recourse was to close out of the app completely, which was a bit of a pain, to be honest.

I could see how this feature could be helpful if you just wanted to watch as many videos as possible without having to scroll through all of the pages and such—but as it was, it was just frustrating to me.

But… maybe the Perk point would make it all worth it! I needed to find out what the conversion rate was, so that’s what I decided to work on next.

How Much Is A Perk Point Worth On Perk TV?

To figure out exactly how much a Perk Point was worth, I tried to click on the perk-points counter at the top right hand corner of the hub screen—and was promptly greeted with a pop up ad.

I realized that this didn’t do anything for me anyway though, so I opened up the Rewards section of the app, and was greeted with this screen. 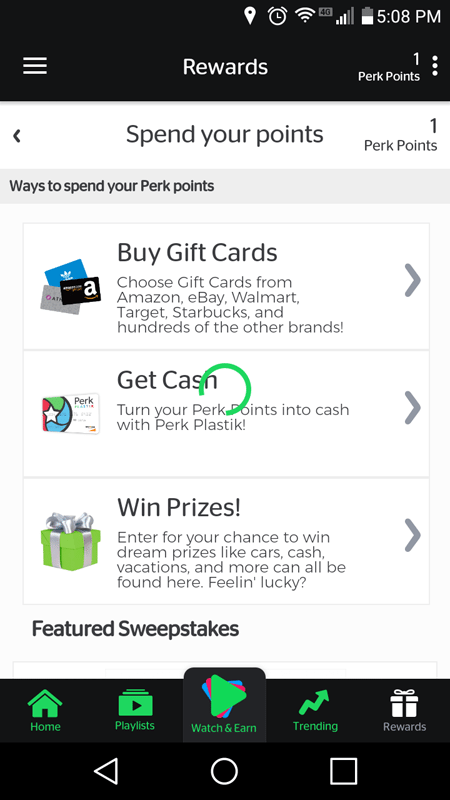 I clicked on the ‘Buy Gift Cards’ option, and was greeted with yet another pop up ad! This was getting a bit out of hand, in my opinion… but whatever. I just wanted to know what the points were worth. I finally made my way into the Amazon Gift card section, and found the conversion rate. 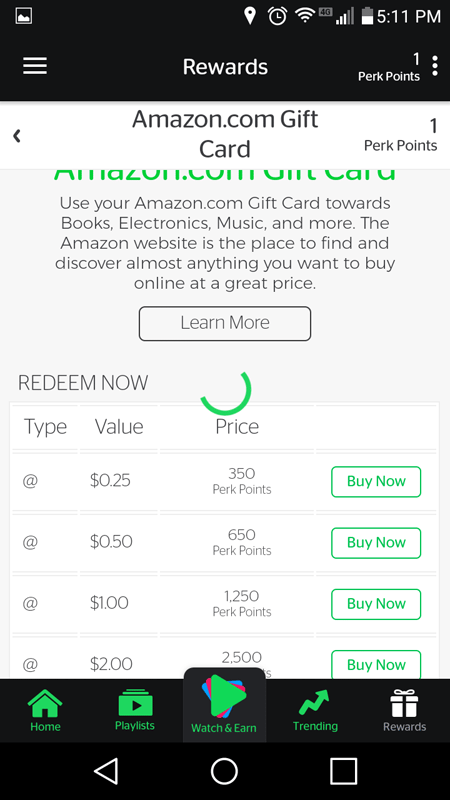 Also, I might add, while I was in this part of the app, another pop up randomly appeared, out of nowhere—as if it were on a timer.

Needless to say, I was becoming less and less impressed as I went along.

I just set my phone down and waited—and sure enough, about 30 seconds later, another pop up ad came up.

I was done. I had learned everything I needed to know about Perk TV.

My Personal Thoughts On The Perk TV App, Based On My Experiences With It

I uninstalled this app as quickly as I could. No more for me. I don’t want to be a negative ninny, but I have never been so happy to get an app off of my phone and never look at it again. What a waste of time.

Can you earn extra cash with Perk TV? Yes. If you want to watch pointless videos until you die of old age and waste your life. I don’t understand why this app has the rating it has.

Maybe people don’t value their time—or maybe some people have figured out how to do everything faster. I’m not sure. All I know is that I wanted nothing to do with this app after spending 15 minutes on it.

The pop ups drove me crazy. I was insulted that I had to watch ads before the videos—which were pretty much just glorified ads, anyway (I found something similar with the site InstaGC).

And to only make 1 Perk Point for the video that I did watch? That was unbelievable. They could have at least baited me with a larger number of points for the first video or something… but just 1 point?

It took so long to load, and there were so many pop ups along the way. I just can’t believe that this app even exists. It baffles me.

On a positive note, it does seem to work well. And, the payout system seems secure and trustworthy. And, believe it or not, it has gotten some pretty good reviews. I guess I just must really be impatient or something—but as far as extra cash goes, I just cannot see how this app could possibly be a feasible option.

There may be ways to make more than 1 point per video… but I didn’t find them, and I will say that after this ordeal, I wasn’t interested.

I even felt like the app slowed down the other apps on my phone. I tried to check a Facebook notification that popped up while I was testing it, and when I clicked to go to it, I got another pop up ad!!!

My opinion? I don’t think this app is worth the time.

Our Final Thoughts About The Perk TV App