Can You Really Make Money With The Qriket App? 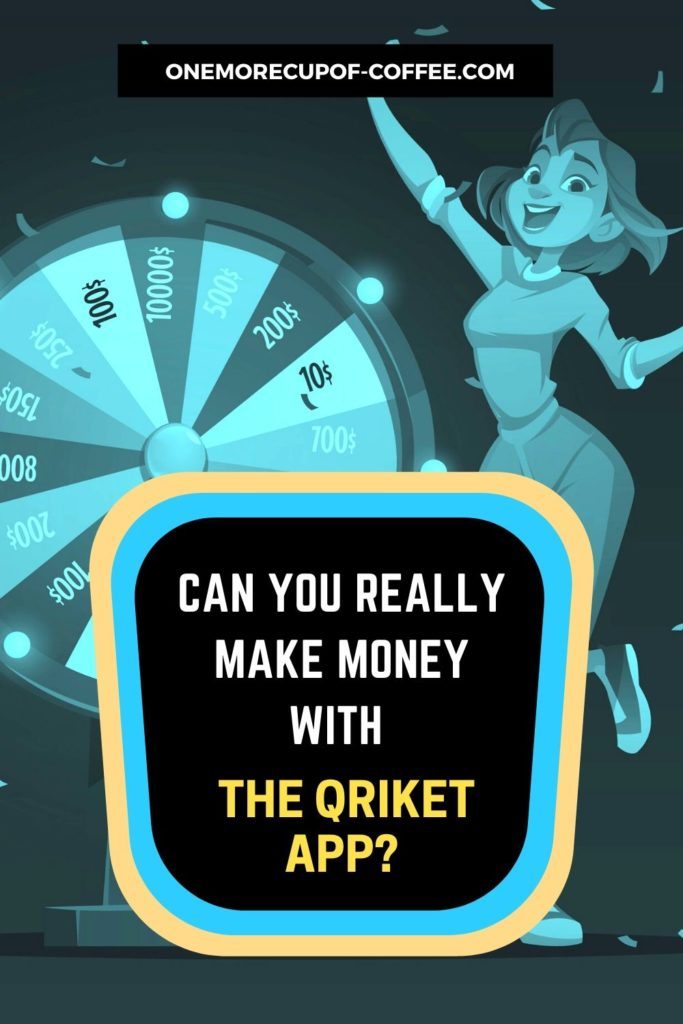 Do you like game shows? If so, then this may be an app that could appeal to you. But can you really make money with the Qriket App? This is what I wanted to know, so I decided to download it and give it a try.

I’m pretty much constantly on the lookout for apps that will allow me to earn extra cash—and that’s how I found Qriket. But will it really do me any good? Here’s what I found out.

Making Money With The Qriket App

First, I took a look at the Google Play listing for the app. The tagline calls it ‘The live game show you can play anywhere.’ The description, which is a bit more in-depth, says this…

“Once a Qriket Live show begins, you pick either blue or gold! If the wheel lands on your color you’ll move on towards the grand prize and we’ll keep spinning until we have a grand prize winner! With runner-up prizes in every game we play, everyone leaves Qriket Live a winner – Every time!”

Ok. I’ll admit that this idea had me pretty hooked. I’m not necessarily a huge fan of game shows—but incorporating an online live game show into an app where anyone could play?

That definitely sounded like an intriguing idea… and I was more than willing to give it a shot.

The app has had over 500 thousand downloads thus-far, and it has a 3.2 rating on Google Play. It’s been reviewed by almost 8,000 people, so it certainly has an audience. 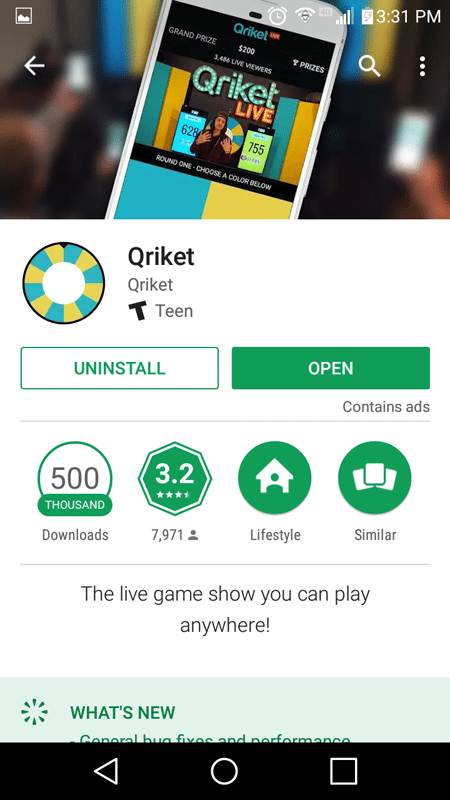 I was a bit concerned about the Google Play rating, as I rarely find good apps with a rating of less than 3.5 stars… but this app was so unconventional that I wasn’t really sure how to compare it to other apps that I’ve reviewed. Plus, 3.2 stars is very close to 3.5… so maybe it is close enough that it doesn’t matter!

At any rate, this was all I could learn without opening up the app for myself—so that’s what I did next.

Opening Up Qriket For Myself

The first screen that we found was the sign up screen. 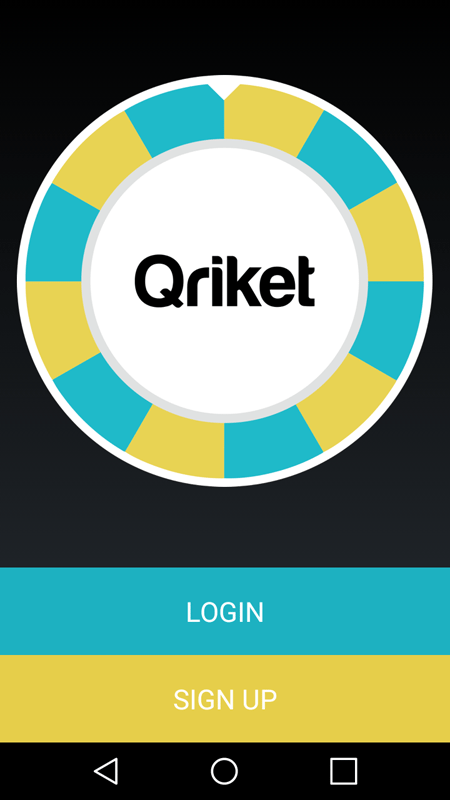 I clicked on it, and was promptly taken to this page. 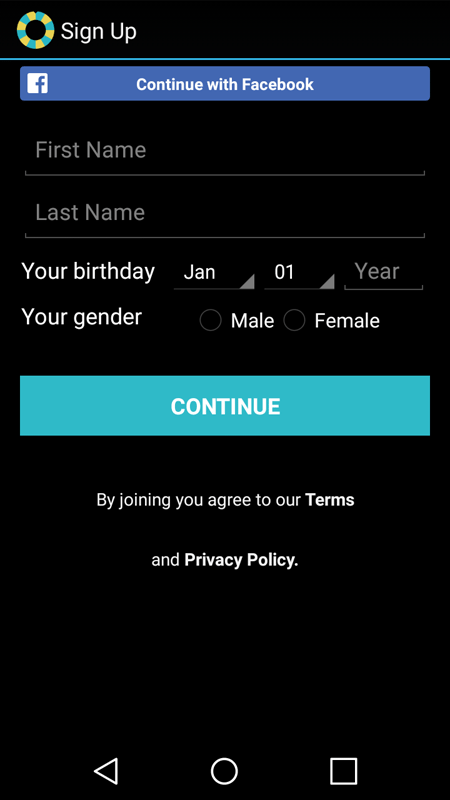 I used my Facebook account to sign up, but I still needed to give them my date of birth and create a password. Next, they asked me to verify my phone number, which was pretty easy.

I just needed to fill out my number and get a code via text message, that I would then (in theory) type in to get verified.

This all worked, right up until the point where I got the text message. But for some reason, the app told me that the server was down at the moment, which kept me from verifying my phone number.

This left me feeling a bit let-down. I wasn’t sure exactly what was going on, but I was hoping that it was just a temporary issue. Was it possible that the app didn’t work anymore?

So I decided to take a look in the Google Play reviews to see what I could find. If this was just a temporary server breakdown, I was certainly going to find some newer reviews that would verify that the app was still working.

Ok, the app seemed to definitely still be in operation—because I found reviews that were literally from two days ago. But, I did notice a trend—I noticed that a lot of the newer reviews were negative, and complaining about the app updating to have only live game shows.

Apparently, before the last update, you could play some games on it at any time of the day.

But now, it apparently only offered the live games, and people didn’t seem to like that as much, if the reviews were any indication. Maybe there are a lot more people enjoying it who are just not leaving reviews… but at this point, I could only go off of what I was reading.

I closed out of the app and opened it back up to try once again to verify my phone number—and it worked!

This is the screen that I saw next. 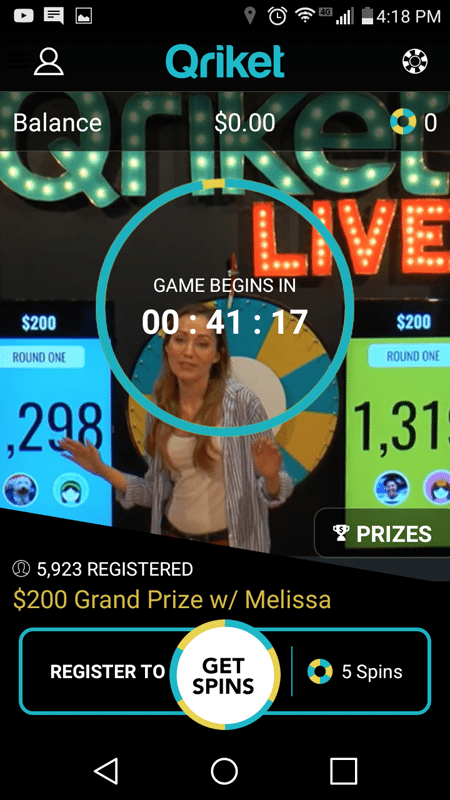 As you could see, there was a little over 40 minutes until the next live game show, so I decided to stick around and see if I could win anything while playing it.

The reviews were pretty scathing in the sense that it seemed like everyone hated the live shows… but I was willing to give it a chance.

I did notice, however, that I didn’t have any spins to use during the game… so I clicked on the ‘get spins’ button at the bottom of the screen, and eared 2 spins for registering. I clicked it again, and a video advertisement played… which gave me another 2 spins.

And that, ladies and gentlemen, is how Qriket makes its money… through ad revenue. But, it’s not that bad, really. The ads are not super annoying, and they don’t really take that long.

They are generally like 30 second ads, or something like that. I still didn’t have enough spins to play, apparently, so I decided to keep earning spins until I had enough.

I found that sometimes there wasn’t even a video to watch. Sometimes, I just had to exit out of a small popup ad, and I still earned 2 spins… which was pretty cool. I wasn’t sure how many spins I would need to play, but I kept at it.

I got to 11 (I think I had 12, but then lost one somehow? I'm not sure what happened.) and then waited for the live game, and here’s what happened.

Playing The Live Game On Qriket

I logged on about the time the game was supposed to start, and clicked to join it. But then, the app said that the server was down, and was unable to let me join.

It did say that there were about 8,000 people playing, so I’m not sure if that had anything to do with it or not—and it also said that the grand prize was $200, but obviously, the odds of me winning the $200 over the other 8,000 contestants was pretty slim anyway.

It is possible that I joined a little bit too late, but the next game was not for like another 20 minutes, and I really didn't feel like sticking around for it.

Besides, I had already experienced a number of technical glitches with this app—and I had really only been using it for one day, so that wasn’t a very good sign.

Thus far, I will admit that the app had not really done much to meet my expectations. I was beginning to understand why so many people seemed to dislike the ‘live’ game feature on the app. It seemed buggy, crowded, difficult to keep track of as far as starting times were concerned, and impossible to win.

Sure, someone was going to win $200… and while there were also other prizes to be had, you would have to log on at the perfect time (there were many games every day… like 5 or more, from what I understood) to play, and a lot of people simply don’t have that kind of time.

They have work, and school, and other responsibilities that keep them from just waiting for the game to start.

I mean, the concept is a fun one, and it intrigued me… but in practice, it really didn’t seem very practical to me.

Will I Be Using Qriket In The Future?

There is a tiny part of my curious self that really wants to play one of the live games—but to be super honest, I am not going to be leaving this app on my phone. It is obviously popular to some people, and it does have a sort of almost gambling-like appeal to it—but it wasn’t for me.

More than anything, I was thrown off by these three things…

My life is already super-busy—I feel like if I’m going to be spending some of it using an app, I need to know that my time spent is not going to be time wasted.

Our Final Thoughts About Qriket