Can You Really Make Money With The Pact App? 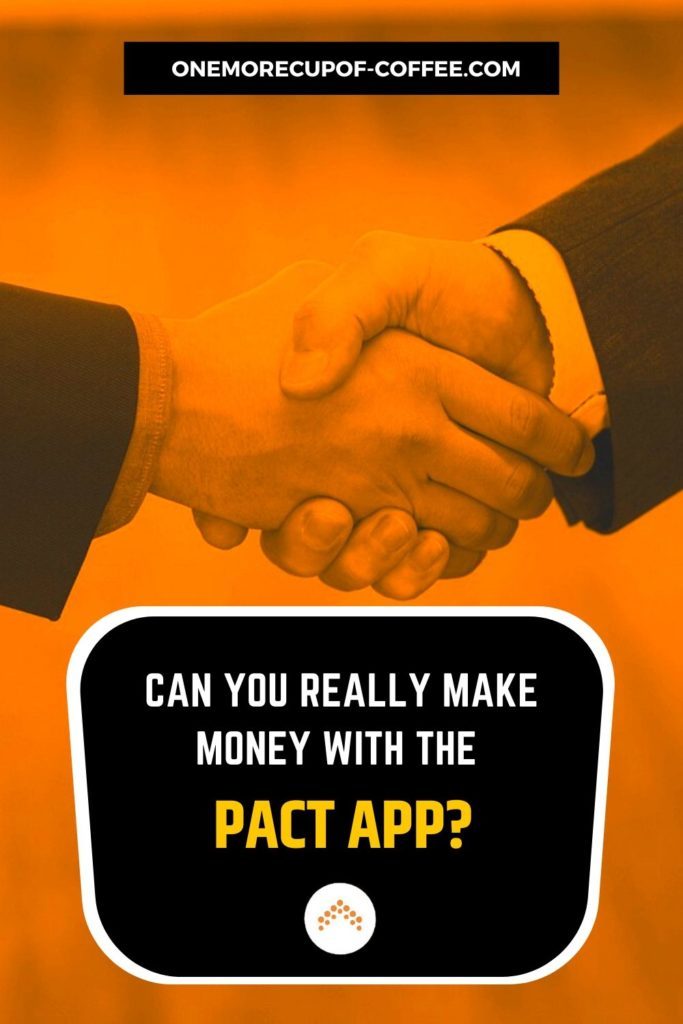 This app promises to pay you real cash for healthy living… but this cash is said to be paid for by other members who aren't meeting their own healthy-living goals! We were pretty interested in it from the beginning, but can you really make money with the Pact app?

I’ve been pretty into fitness recently (and no… not ‘fitness whole pizza into my mouth' kind of fitness), and have been working out quite a bit, so this app caught my eye for obvious reasons.

I love to make extra cash, and I love to work out, eat healthy, and take care of myself.

So what’s not to love about an app that pays you extra cash to live a healthy lifestyle?

But it almost seemed too good to be true, so I decided to download it and try it for myself to find out. Here’s what I found out about Pact over the course of my research.

Making Money With The Pact App

Let's start with the basics, what is Pact anyway?

The basic description for the app is as follows…

“Earn real cash for living healthy, paid by the members who don’t!”

The app has been downloaded over 500,000 times, but it has a pretty sad 2.9 star Google Play rating… which made us do a double take.

We haven’t seen a Google Play rating this bad in a long time. But, we weren’t interested in cutting the research short. I was still determined to figure out what all of the buzz (or lack of it) in Pact was about. The app had some pretty mainstream TV attention at one point… so in my mind, there had to be something to it.

Opening Up Pact And Getting Started

We saw a video about how pact works, which you can find on the official Google Play listing page, or here, on the app YouTube channel. So, the concept is pretty simple.

You set goals for yourself and decide how much money you want to stake on your success. If you meet your goals, then you get cash rewards, which is basically the cash that used to belong to the people who didn’t make their goals.

But if you fail to keep your goals… well… then the cash that you used to set your goals goes toward paying people who did keep their goals that week.

When we first opened the app, we were greeted with this page. 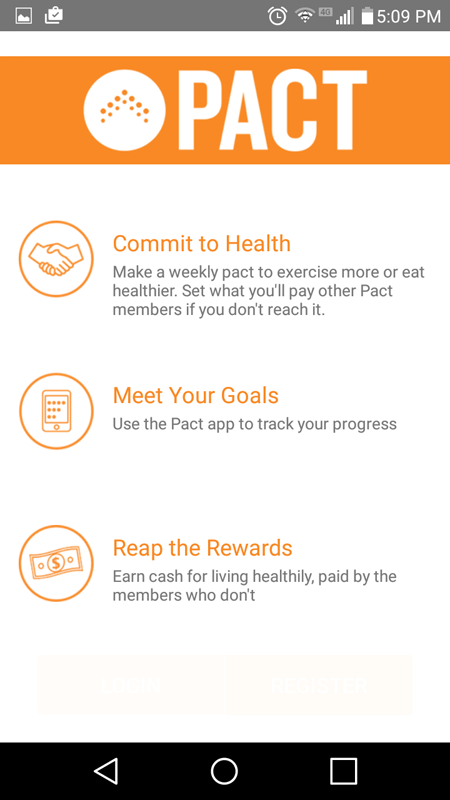 This gave us some pretty good information about the app, but not really anything that we hadn’t already learned. So we moved on by clicking the ‘Register’ button at the bottom of the screen. We chose to register with Facebook, which is always a pretty easy process with apps like this.

The next page that we came to was this one. 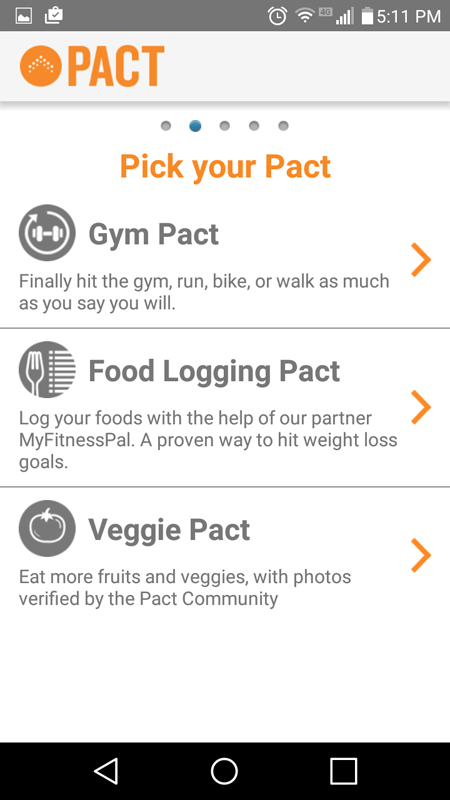 Here, we needed to ‘Pick our Pact,’ which basically meant that we needed to decide which direction we were going to travel in to set and meet our healthy living goals. There was the option for a Gym Pact, a Food Logging Pact, or a Veggie Pact.

Me, being more of an exercise person than anything else, decided to choose the Gym Pact.

Next, I was taken to this page. 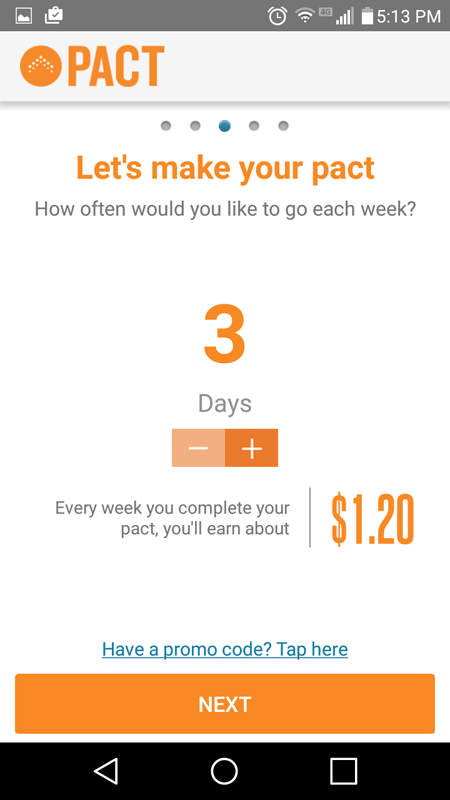 This is where I would need to decide how many days I would commit to going to the gym. I chose 3, and was told that I would basically earn about $1.20 for each day that I completed my goals—which was pretty cool!

I wasn’t expecting to get an actual number quoted to me in advance. I figured that it would be more like a situation where all of the money that was paid in was split up and given out to those who kept their goals.

So to see an actual quote for an amount of money was surprising to me.

Next, I was taken to a page where I needed to set the stakes for if I missed my Pact. The denomination was set at $10 by default, but I could raise or lower it by increments of $5. The lowest I could go, however, was $5.

I wasn’t disappointed by this, though. Higher stakes means that I’m more likely to complete my goals. It also means a bigger payout for everyone if the person with the higher stakes doesn’t make their quota!

It was pretty easy to see where the ‘reward' cash came from after I saw this.

After I clicked ‘Next,’ I was taken to this screen. 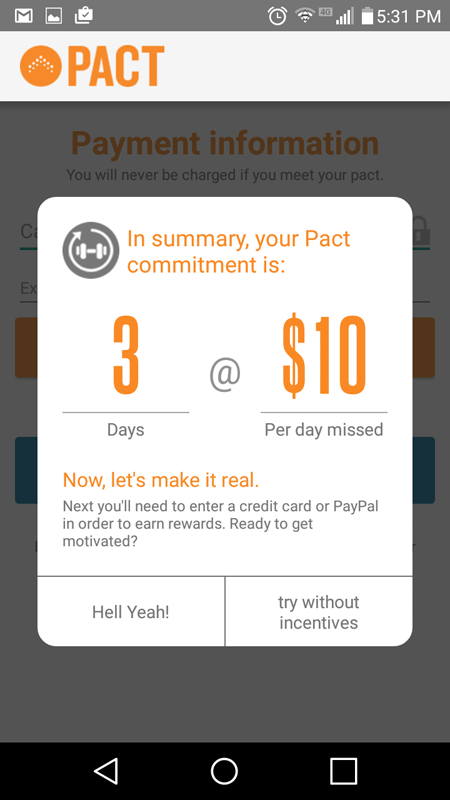 Now was the time to ‘do or die,’ so to speak. If I wanted to try to earn incentives, I would need to supply the app with my credit card or PayPal information.

But I wasn’t quite ready for this part of it yet—so I decided to try without incentives first, just to see what the rest of the app looked like (I guess what I'm saying is that it wasn't ‘do or die' at all, it was ‘do or wait till later to do if I wanted to'… meaning that that comment was, perhaps, needlessly dramatic on my part. But whatever… moving on!).

Taking A Closer Look Inside Of Pact

I clicked on the ‘try without incentives’ option and was surprised when this page popped up. 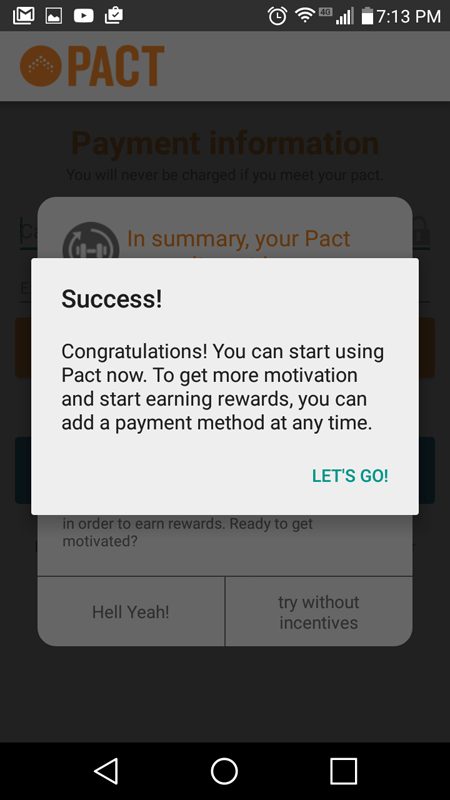 It was nice to know that I could start earning incentives at any time and that trying it without them wouldn’t necessarily penalize me or anything.

Next, I was taken to a series of pages that showed me exactly how the process worked. Here is a rundown of what the main points of these pages were…

2… Exercise for at least 30 minutes

3… Or, you can complete 10,000 steps over the course of the day, and record them by using either FitBit or Jawbone UP

4… You can only count one workout per day. If you work out twice, you cannot count the second one.

5… If you have a medical emergency, you can report it to the app so that you won’t get unfairly penalized.

Once I finished these pages, I was taken to what seemed to be the ‘Hub’ of the app. 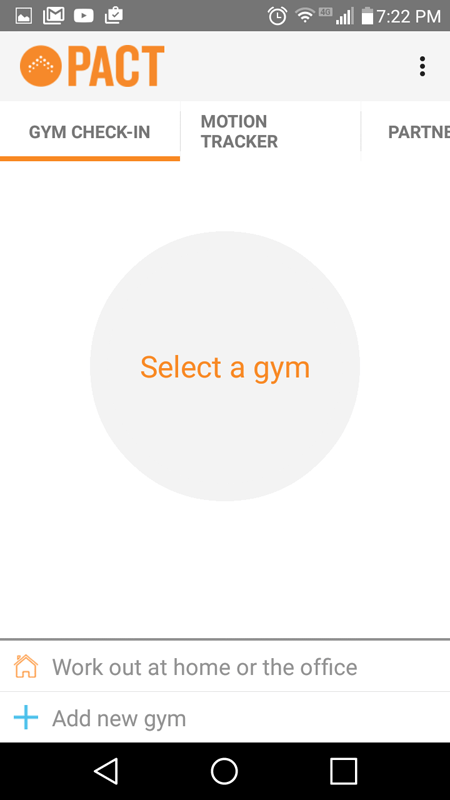 From here, I could do a number of things. I played around with it a bit to see how it worked, and liked what I found. Adding/finding gyms was pretty cool. The app seems to use Google Maps to great effect, and the GPS locator on it is spot-on.

There is also a pretty cool motion tracker that you can use to record your steps and such. You only get 1.5 hours to log 30 actual active minutes—so don’t start it up if you plan on just sitting around the entire time!

There is also a section for Partner Apps, which gives you some pretty good options for apps that go right along with Pact.

You also have the option to work out at home, though you must use the motion tracker to do so. You can’t log your home gym as an actual gym, because the app cannot verify that you are actually at a gym.

And yes… the app does verify each gym. Humans actually complete this task—so you won’t be able to fool it by just selecting some random place and calling it a gym!

There is also a cool profile screen that you can use to keep track of your earnings and progress.

Can You Earn Enough Money On Pact To Make It Count?

As you know, I’m all about earning extra money. And the most important question that I wanted answered about the app was this… could I really make money with Pact?

As it turns out, I feel that the answer is a yes… but maybe not a ‘big’ yes.

But… it is an awesome idea, and it could be a very dynamic tool to help motivate yourself to do better with workouts.

And as far as the money is concerned, even though you can’t necessarily earn a ton on the app on a daily basis, that’s still a pretty big chunk of change that you get at the end of the year that you could then use to buy something nice for yourself.

The app works really well, the graphics seem well-done, and functionally, it performs without a problem… at least as far as I could tell.

Personally, I liked the app. And at this point, I may even keep it on my phone and start using it to keep me motivated to work out. I mean, we could all use a little bit of motivation, right?

It’s a good idea that’s being implemented in a way that seems to work. If you like to work out, want to live healthier, want to be more motivated, and wouldn’t mind earning some money on the side from time to time as well, then this app is probably a good choice for you.

The negative? Don’t use this app if you never plan to work out—because you will go broke (lol). I mean, that’s kind of the point. But yeah… this app isn’t for the individual with zero motivation or self-control. It will cost you a lot of money (and make the other, more successful users a lot happier and richer).

If you're not a fan of Pact, there are other apps that focus on health as well. DietBet is one example, which looks at weight loss. There is also Bitwalking, Achievement and HealthyWage.

Our Final Thoughts About Pact