Can You Really Make Money With The DietBet App? 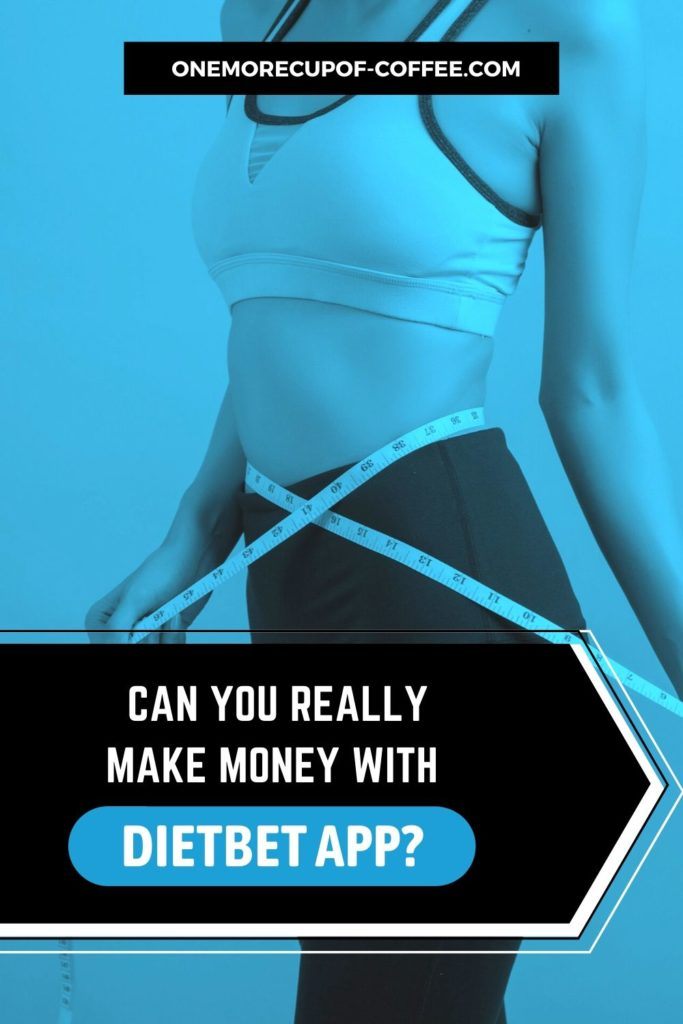 Incidentally, I found this app while I was looking for apps that would help me to lose some weight—but I ended up finding an app (this app) that also promised to help me to earn some extra money at the same time! But can you really make money with the DietBet App?

This was what I was thinking… which is why I was so pumped to give it a try.

So here’s what you need to know.

Making Money With The DietBet App

So, let's start from the beginning. What is the DietBet app?

The tagline description for the app is as follows…

“Have fun, lose weight, and make money with a DietBet challenge today!”

So, yeah. This really sounded like the perfect thing for me.

The basic Google Play stats for the app were pretty good. It has been downloaded over 100,000 times, and has 4.5 stars in the Google Play reviews. 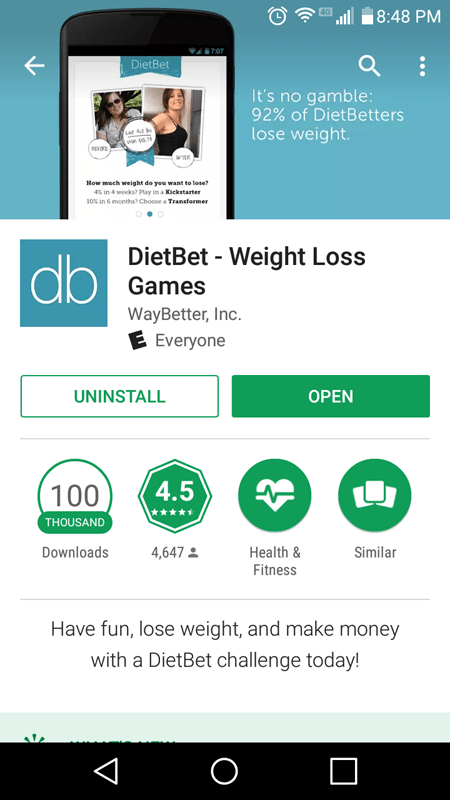 So far, everything was checking out. It had plenty of downloads, and more than 4,500 reviews had given it a really awesome 4.5 star rating, which is an excellent sign.

But, I’m never one to judge an app (for better or for worse) based on the stats alone. So the next thing I did was open it up. Here’s what I found.

Opening Up The DietBet App For The First Time

The first screen that I came to upon opening up the app was this one. 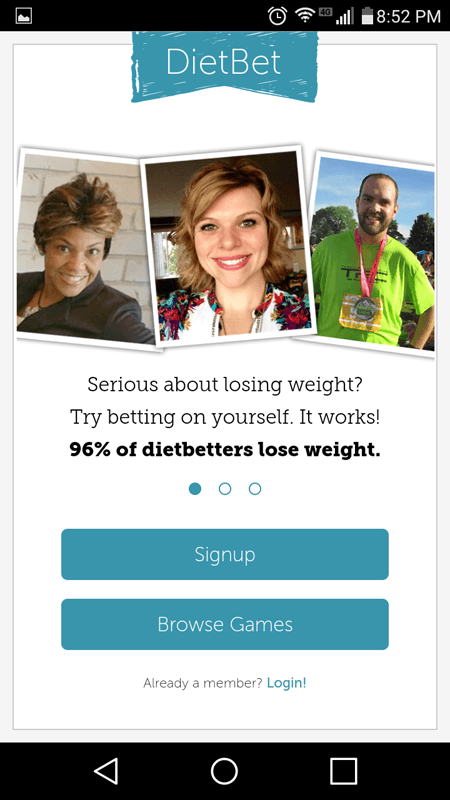 This was where you could sign up, or browse games to get started with the app. There were actually a few scrolling screens here that told me a bit more about DietBet in-general. Here’s what they said, in summary…

Ok, so now I was getting a better sense of how this app worked. Basically, everyone joins a pool and puts in money (I think).

Then, they have a certain amount of time in which to try to reach the goal percentage weight loss. Everyone who makes the goals gets a portion of the pot. The people who didn’t make the goal don’t get anything.

And that’s pretty much it. It seems like this is an app where you bet on yourself and on your ability to lose weight.

This idea kind of appeals to me, to be honest. I mean, you have to risk some money—but you could stand to win quite a bit if you can stay consistent! Plus, apps like this give you a lot of actual control over you actually get money back or not; which is awesome.

I pressed onward and signed up for the app. Let’s talk about that next.

Signing Up For The DietBet App

I used my Facebook login to sign up, which was quite easy, to be honest. The only extra steps I had to take were to fill in my gender and create a password.

Once I got done with this step, I made it to what appeared to be the ‘main hub’ of the app. This is what I found there. 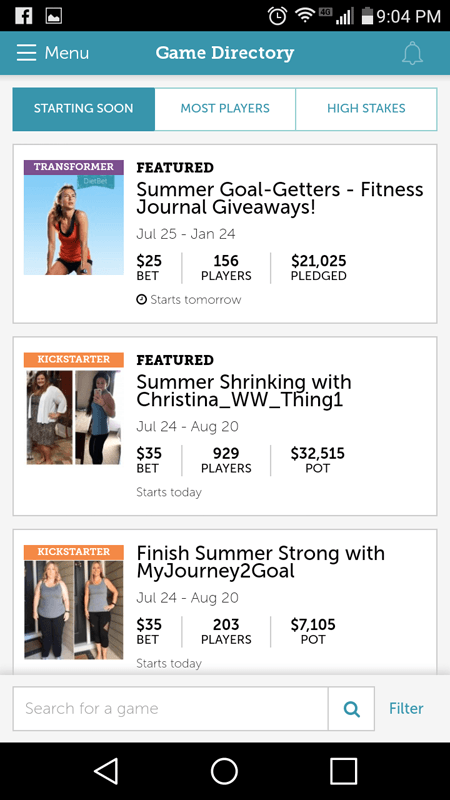 Here, I saw that there were various games that were getting ready to start. I actually really like this, because it showed me a list of upcoming games that I could get involved in… both for weight loss, and to earn extra cash.

To start with, I took a look at the first game on the list. Here is a screenshot of the listing. 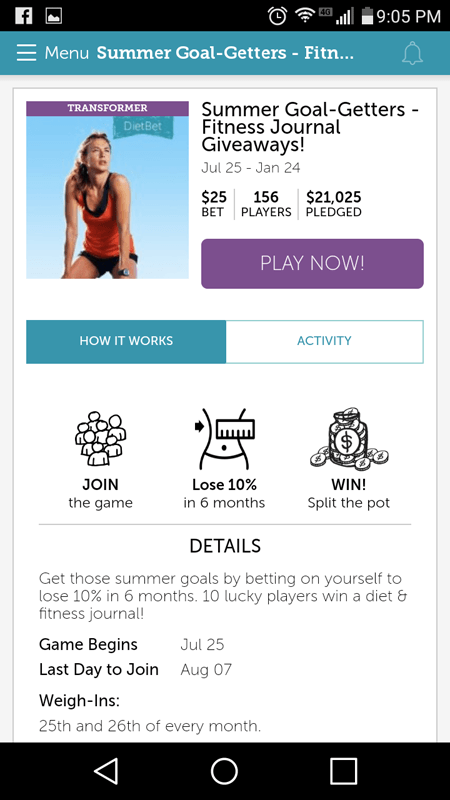 As you can see, it is pretty simple. Basically, it costs $25 to enter. As of this moment in time, there were 156 contestants signed up. The prize pool of pledged money was $21,025… which is pretty awesome!

I mean, this amount won’t all go to one person. It could, in theory, just get split up and go right back to each participant if they all made their goal weight. But… that probably wouldn’t happen, so I imagine that those who do meet their goal weight would certainly double their money, at least… if not more-so.

But there is also another element to this that I really liked. I really, really like how basically everyone who participates loses weight. This is a really cool way to find motivation for weight loss. But, it is also cool that you can earn money as well.

The weigh-in process is also pretty straightforward. Basically, you need to take two pictures at each weigh-in.

You need to take one of you standing on your scale, wearing just pants and a shirt… and you need to take a picture of the number on the scale, right next to the weigh-in word (written on a card or a piece of paper) that is supposed to be used that round.

The weigh-ins are checked by referees, and at the end of the challenge, if you lost the proper % of body weight, you will get a cut of the prize money!

How Do You Get Paid In DietBet?

If you win some money in one of the games on DietBet, then you have a few different options for what you can do with it. You can, of course, choose to use it to re-enter a different game.

Or, you can request that it be withdrawn as payment in monetary form. This can be done through PayPal, though you can also order a paper check.

If you order a paper check, however, keep in mind that you will need to pay a $5 fee!

But yeah, it’s pretty much that simple.

How Much Do People Tend To Win?

Different games are set up differently, have different numbers of competitors, and require different things to win—so it is quite important that you read the game description very carefully before joining.

There are quite a few different options for games, and there seem to be enough going on all the time that anyone could jump in—which is awesome!

I am so glad that there were enough games going on that I could literally have joined one within a day or two. That is amazing!

Would I Personally Use This App To Help Me Lose Weight And Make Money?

Yes. Without a doubt, and here is why.

First of all, the app seems very well done. It has a great track record and outstanding Google Play ratings… so that all helps to make me feel better about it. Plus, the way the games are set up is pretty cut and dry.

Obviously, if there are a lot of winners, you may not win very much… but pretty much, for the most part, if you lose the weight and get down to the goal %, you will be making some extra cash… because not everyone is going to be able to make that goal.

Next, this is an awesome motivator to get into better shape. I mean, fitness should be a big part of everyone’s life. Personally, I hit the gym every day anyway… so why not give myself the opportunity to earn some sweet cash while I’m doing it?

The one downside to the app that I have seen thus-far is that it would really only be useful to you a handful of times. I mean, you can only lose a certain percentage of body weight before you really shouldn’t lose any more—so that could keep someone from earning money in the long term with it.

But heck. If you reach your goal weight and make some awesome extra cash, isn’t that a win/win? Just pocket your money and find a different way to make some side cash after that.

You could also think about the app Achievement, as that one focuses on healthy behaviors, rather than just weight loss.

All things considered, I loved the DietBet App. Awesome. Purely awesome. If you need to lose weight and you are into making some extra money, then I definitely feel like you should check this one out.

It will not offer you the long-term solution to extra cash that you are likely looking for… but it is great for what it is. There are other similar apps out there, such as HealthyWage and Pact, but DietBet is the one that I'm the most impressed with.

Our Final Thoughts About The DietBet App

Can You Really Make Money With The HealthyWage App?
Next Post:Do Money Making Apps Really Work?