Can You Really Make Money With The BevRAGE App? 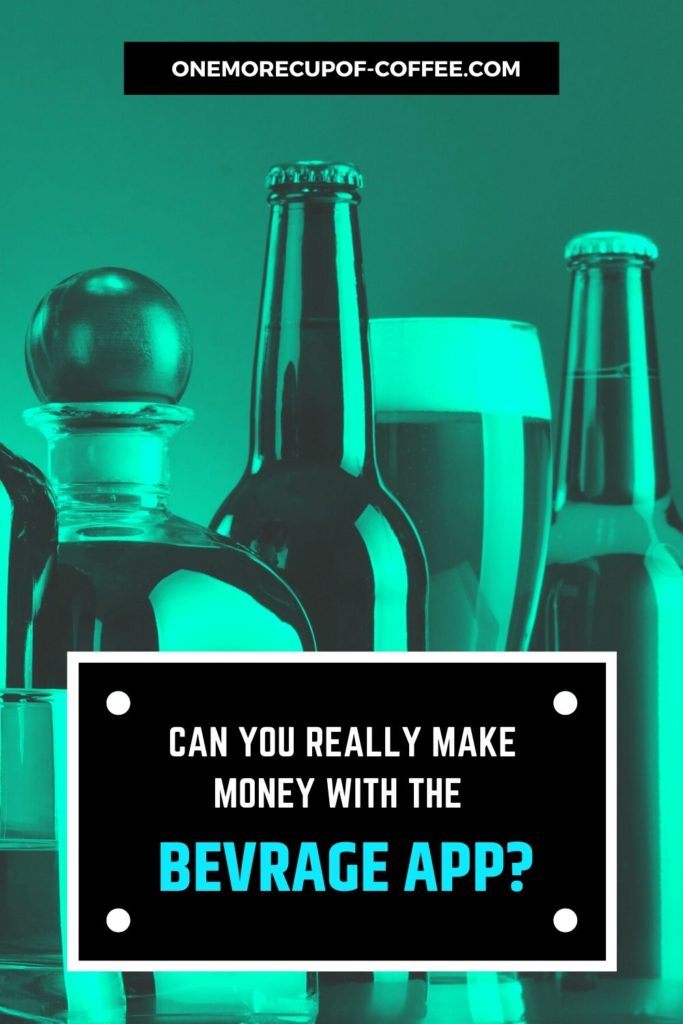 This app claims to get you cash back on alcohol purchases, like beer, wine, etc… But can you really make money with the BevRAGE app?

Now, this was an app that was right up my alley! I mean, I’m not an alcoholic or anything—but I certainly enjoy a beer, some wine, or even a mixed drink now and then.

I also enjoy throwing the occasional party at my house—so being able to get some sweet cash back on my alcohol purchases could be an awesome way to earn some lucrative side-money!

But does it really work?

This is what I was determined to find out, so I downloaded it and decided to give it a try.

Making Money With The BevRAGE App

Let's start with the basics, the app itself. Simply put, this app has the potential to be one of my favorites.

It is supposed to get you cash back on alcohol bought not just in liquor stores, but it is supposedly also able to help you get it on drinks bought out-and-about at clubs, bars, and restaurants!

It has been downloaded over 100,000 times and has 4.3 stars in the Google Play reviews. 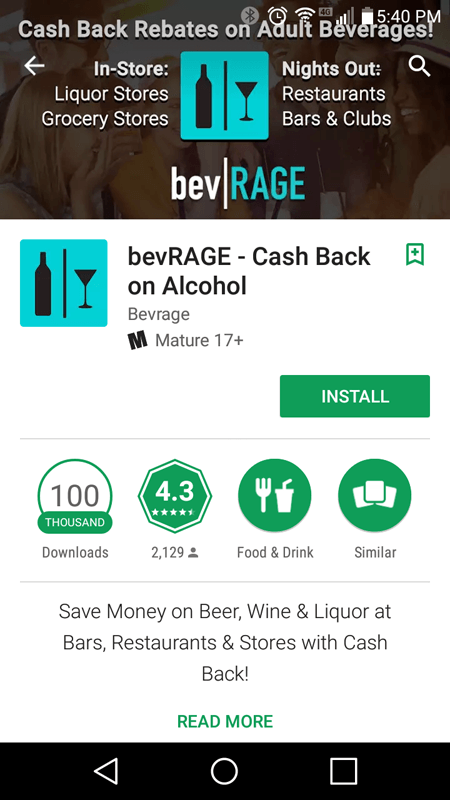 And the tagline for it in the description says this…

“Save money on beer, wine, and liquor at bars, restaurants, and stores with cash back!”

Heck… even the name of the app is awesome!

Bev (as in beverage) + RAGE = BevRage

I love it. I absolutely love it.

But… does it work? Can it make you any extra money?

Here is what I discovered over the course of my research.

Trying Out the BevRAGE App For The First Time

The first screen that I came to upon opening up the app was this one. 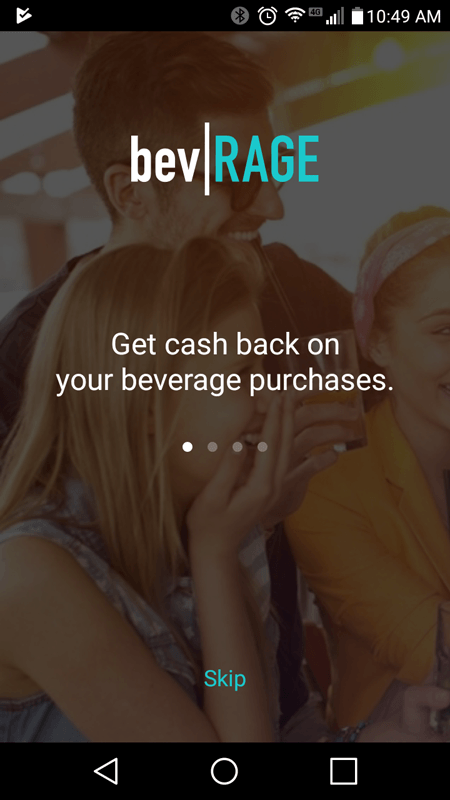 This was the first in a series of brief intro screens that seemed designed to tell users more about the app. Here is a quick summarization of what I learned here.

And that was pretty much it. The fourth screen in this intro series was the sign-up screen. Signing in with Facebook was an option, so that’s what I tried first. As it turns out, this worked like a charm… and I soon found myself at what appeared to be the ‘main hub’ of the app. 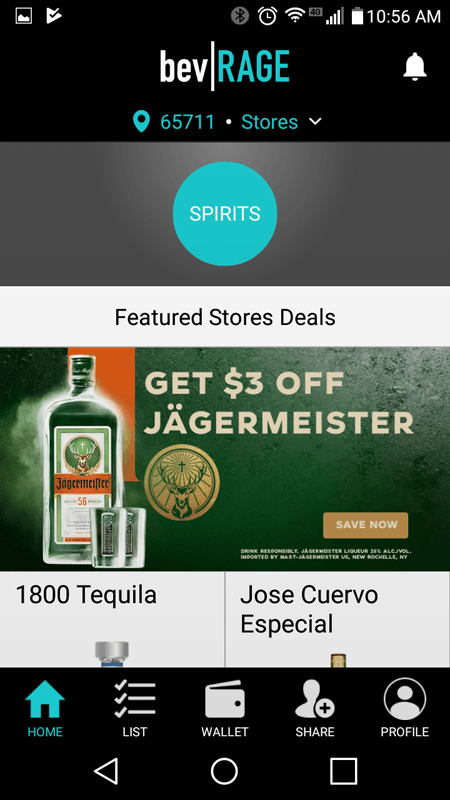 Across the bottom of the screen were five tabs: Home, List, Wallet, Share, and Profile. At the top of the screen was a space for my location and a drop-down menu for stores and bars in my area.

There were also some featured deals that you could scroll through on the main hub, which was pretty cool.

I scrolled down through these deals and took a look… and to be super honest, they were not bad deals at all. Here are a few examples that I found. 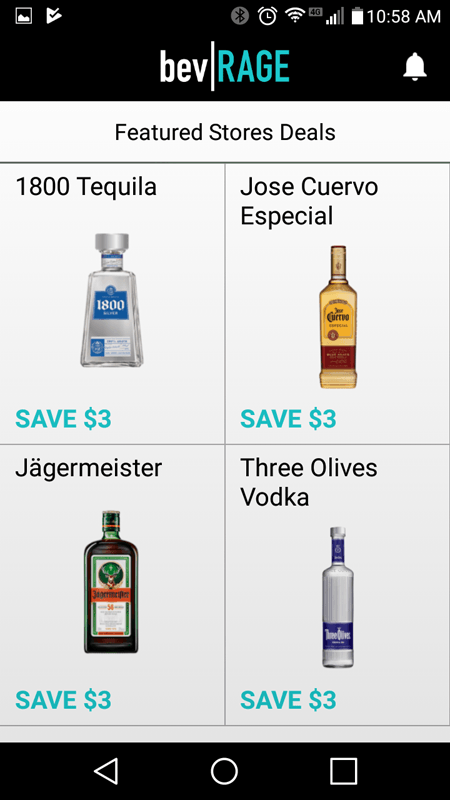 $3 off a bottle of Jagermeister? That’s actually not a bad money-saver, really. Bottles of Jager aren’t necessarily cheap, so this really helps to offset the cost!

I clicked on this deal and was taken to this screen. 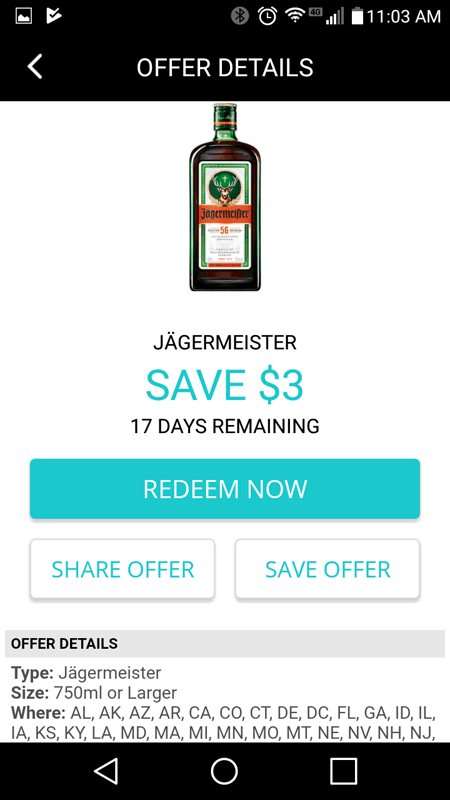 As you can see, there is a size requirement (must be a 750ml bottle or larger). It is only valid in some states (most states, actually), and it has an expiration date.

Next, I clicked on the ‘Redeem Now’ button, just to see what would happen. I ended up getting this page as a popup, which seemed to be the instructions for how to use the onboard receipt scanner. 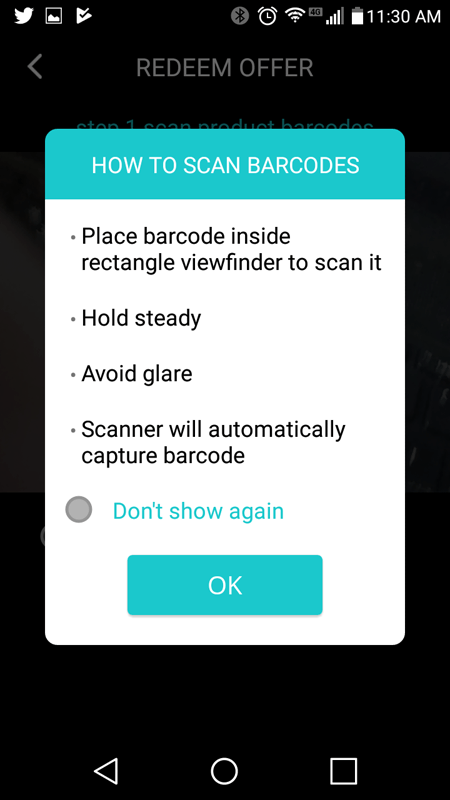 Next, I finally arrived at the barcode scanner. 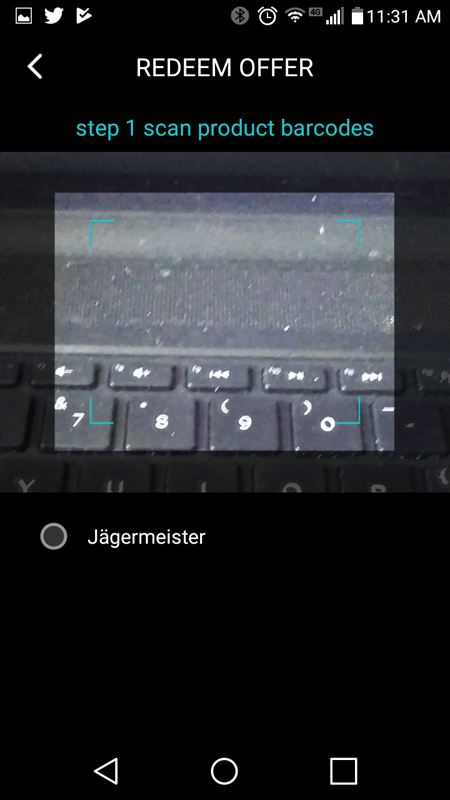 It all seemed pretty simple to use at this point. You just scan the receipt and go through the remaining steps to claim your cash back.

Taking A Look At The Rest Of The BevRAGE App

Next, I decided to click on the ‘Wallet’ tab, just to see what it would take to actually get your cash-back with this app. As it turns out, this is a pretty simple ordeal.

You can either withdraw your money with PayPal and have it in your account within 48 hours… or, if you have at least $20 in your account, you can have a check mailed to you via snail mail, which was a bit unexpected—but certainly not something to complain about.

I actually like the idea of getting a paper check in the mail. It would take longer, but it would save me some money on PayPal fees, which wouldn’t be a bad thing at all!

I also went to the ‘Account’ section and took a look around there. I realized here that you can let the app know if you are a service professional in the alcoholic beverage industry. If you are, then you can get exclusive promotions—which is awesome.

One thing that I was a bit disappointed with was the fact that there didn’t seem to be a ton of deals available in my area. I only had like five or six available to me at the moment, as far as I could tell… so obviously the choices are a little bit limited.

With this being said, it could take a while to actually earn enough cash back to cash out. But… this would also depend on how often you bought alcohol, and whether or not you were a professional in the industry. From the sounds of it, industry professionals get even more offers… so that could be an awesome thing.

You could also toggle whether you were shopping at a store or at a bar/restaurant, and that was super cool—because the deals were slightly different that way. You could, for example, get money back on a mixed drink made with one of the alcohols in the list, which would be handy.

This could be done at any bar or restaurant just by taking a picture of the receipt.

At this point, I really felt that I had learned enough about the BevRAGE app to formulate an official opinion of it… so here is what I decided.

First of all, let me just say that there wasn’t much about this app that I didn’t like. I love the idea of getting cash back on purchases of any kind… and since this app is specifically geared toward alcohol purchases, I feel like people who do a lot of social drinking could really stand to save some sweet cash with it.

Obviously, you are not going to get rich using this app, as you have to spend money to make money with it—and therein lies one of the major downsides of shopping apps like this.

But… I will also say that I feel like this app could really earn a person some sweet cash back. And a definite upside to it is that it allows you to make use of offers both in stores and in clubs/bars.

Another downside to it, though, is the fact that there are not that many offers to take advantage of. I would have really liked to see about twice as many opportunities given to earn cash back.

But, at the same time, I do understand that this is a niche app that focuses on one very specific type of product.

So, I guess the big question is this…

The app works well and does what it does without a problem. But will it provide you with enough cash back in the long-run to make it worth the space on your phone?

The answer to this question probably depends on the individual person.

Are you in the alcoholic beverage industry? If you have a job in this industry, then you are supposed to get more and better offers on the app, which may tip the scales for you.

Another possibility is that people who simply buy a lot of alcohol will probably fare better using this app than most people. Personally, I don’t drink near as much as I used to, so this app may not be worth it for me in the long run.

But… even with that being said, there are still certain times of the year and certain situations in which I could certainly wrack up $20 on this app without a problem, over the course of just a few weeks!

So it is very situational. But overall, I did like the BevRAGE app, and I may even keep it and use it if the timing seems right. You won’t get rich with it, but it is certainly not a total waste of time either.

There are other more general apps out there to try, such as Fetch Rewards, ShopKick, Dosh, and Ebates. These feature more product types, so they could be suitable for more people.

Our Final Thoughts About The BevRAGE App