Can You Really Make Money With The Apperwall App? 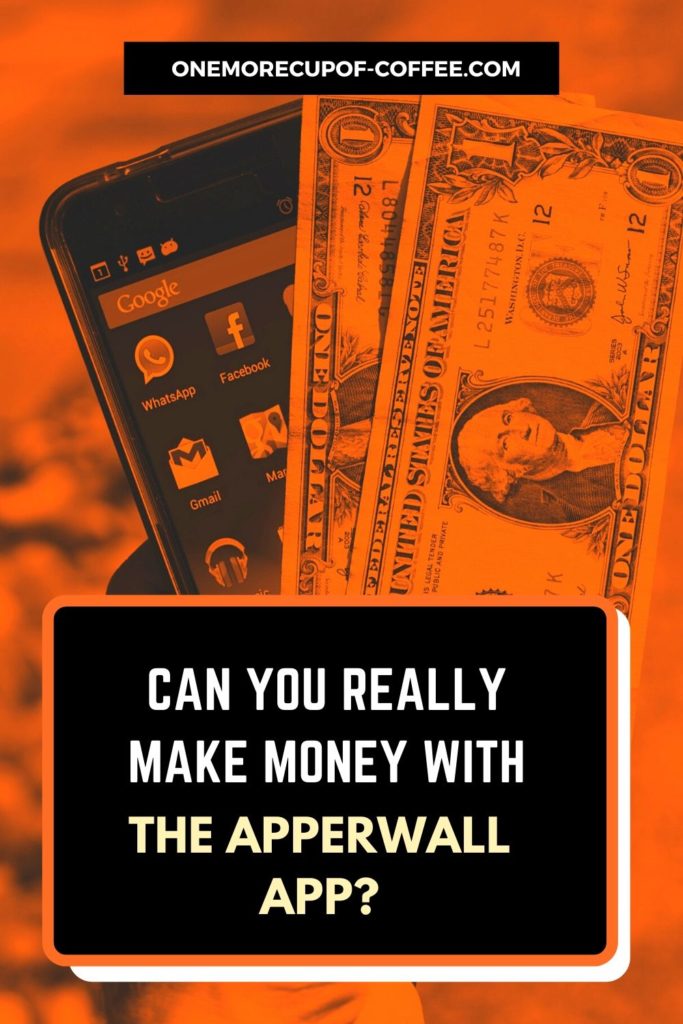 Lately, I’ve been thinking about starting another side hustle—and one of my favorite ways to side-hustle money is through mobile apps.

Believe it or not, there are a lot of mobile Android apps out there (all available in the Google Play Store) that promise to help you earn extra cash and/or gift cards/rewards. But can you really make money with the Apperwall App?

This is what I was interested in finding out… so I downloaded it and decided to give it a try.

Making Money With The ApperWall App

The first thing that I noticed when I looked at the app in the Google Play store was the popularity of the app. It had over 10,000 downloads, indicating that it has quite a user base. But it also has a 4.3 star rating—which is actually really good. 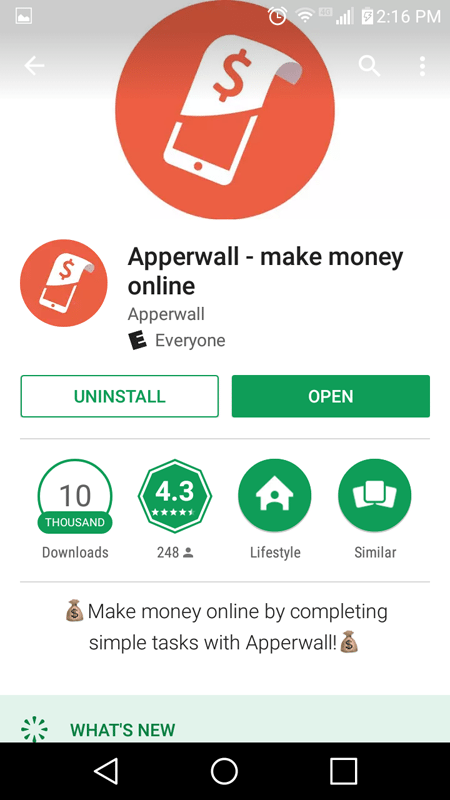 I generally don’t expect apps with a rating of less than 3.5 stars to be much good, honestly—so Apperwall already blew this out of the water, which made me pretty optimistic about it!

As for what the app does, here is what the tagline in the Google Play store said…

So at this point, I opened it up to give it a try. Here is what I found.

Opening Up Apperwall For The First Time

This is the first screen I arrived at after opening up the app on my phone. 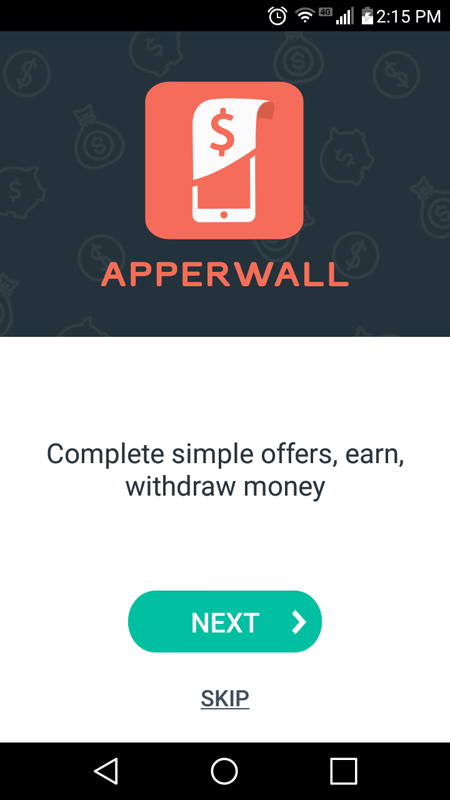 This began a series of pages that gave me information about the app and exactly what it could do. Here is what I learned from these pages…

After going through these screens, I was taken to a sign up/sign in screen. I used my Facebook login to get into the app, which was pretty easy. After that, I was taken to this screen… which seemed to me to be the main ‘hub’ of the app. 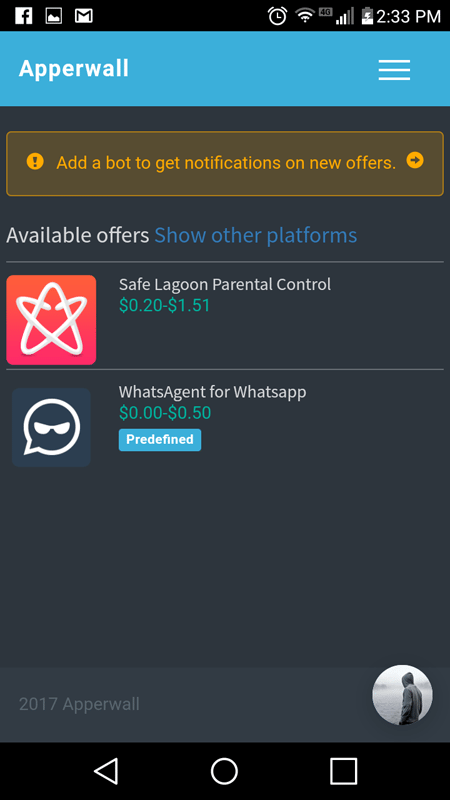 Here, I was greeted with what seemed to be two available offers. I chose the first one, and decided to give it a try.

Trying Out An Offer On Apperwall

Alright. After clicking on the offer, I was taken to this screen… which basically gave me the low-down on exactly what I had to do to earn the cash.

The cash amount was displayed easily for me to see. The offer was worth $0.20-$1.50, though, to be super honest, I was not completely sure how much I would earn within this range… but that’s ok!

The offer was pretty simple. I needed to download this app, use it for five minutes, submit a review that was a word-for-word copy of the example that they gave me, and leave the app installed on my phone for 7 days after that… using the app periodically during that time.

Whew. I will be the first one to say that that is a lot for $1.50. That’s like—a lot of work. Not a huge amount. It probably wouldn't equate to more than, say, 5-10 minutes. But still, it just seemed like a lot for the amount of money.

I decided to back out of here and go back to the other offer, just to see what it was like.

The next offer basically wanted me to study another app (this one was a different app from the one in the first offer), write 5 unique reviews about it, and then submit all of them through Apperwall. The payment on this offer was up to $0.50 (so basically 10 cents per review), and was dependent upon the quality of the reviews.

At this point, I was beginning to notice a bit of a trend. Unfortunately, it is a popular trend among apps like this—and not in a good way.

The good thing about this app, thus far, was that it provided offers. That part was pretty cool, because there is nothing quite as disappointing as opening up a new app, signing up, and then realizing that there is nothing to do.

The style is a little bit like microtasking, which is interesting. But, as with microtasking, the little tasks would get monotonous fast.

But the major downside that I was discovering was that the offers tended to ask quite a bit from users for the money. I wasn’t sure that the money being offered was really worth the work that needed to be done—but we will talk more about this a bit later.

For now, I wanted to explore the rest of the app and see what else there was to it.

Exploring The Rest Of The Apperwall App

A drop down menu in the upper-right hand corner of the app revealed a few more options for me to look through. Here is a screen shot of the types of pages available in this part of Apperwall. 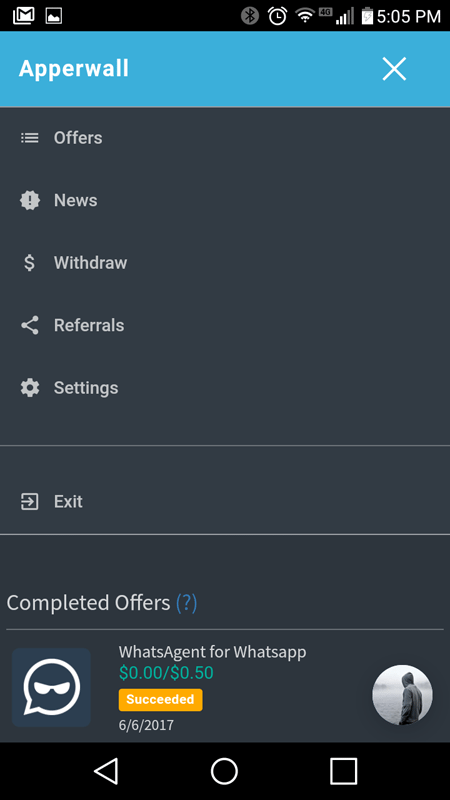 I scrolled down to the ‘Withdraw’ page and clicked on that. Here, I found this page—which was actually pretty informative. 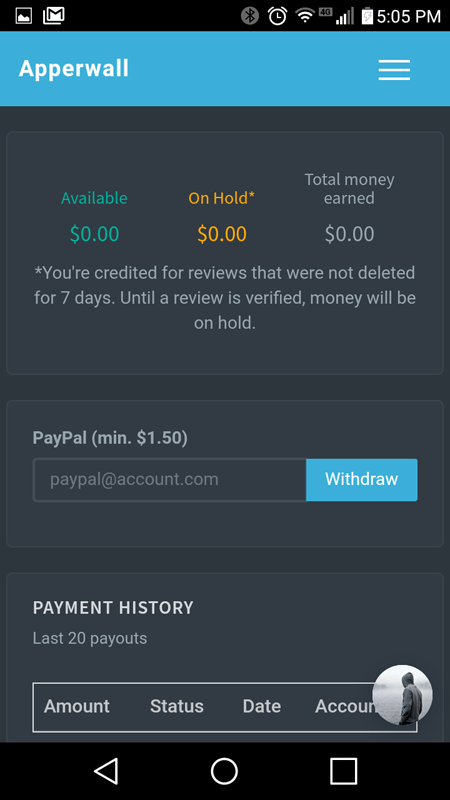 I learned that PayPal seems to be the only method to withdraw funds—but that works for me, because I actually prefer PayPal most of the time. I also learned that the minimum amount that you can withdraw at once is $1.50, which is actually quite low, so that was a good thing to see.

This means that you don’t have to build up your money forever before deciding to withdraw it… which is a problem with some apps that I’ve looked at in the past.

I was beginning to understand why this app had gotten such favorable reviews… but I was also seeing that there were some things about it that I had problems with.

I also noticed that you get paid for reviews that you write, seemingly right away—but that the money is ‘on hold’ for 7 days. As long as the review is not deleted, you still get the money.

This seemed fair enough. I can see why Apperwall does this, though I am not sure that it makes the app any better from my perspective. Having such a long waiting period doesn’t necessarily hurt anything in the long-run—but still, it seems like quite a bit of extra hassle, and takes points away from the overall experience for me.

With that being said, at this point, I felt as if I had learned enough about the app to come to a conclusion about it.

Does Apperwall Pay Out Enough Cash To Make It Worthwhile?

I can see why Apperwall has such a good Google Play rating. It does have a lot of strengths. For one, the app works really well. As far as the technical side of things go, it’s pretty darn near perfect. The buttons work. There are no glitches. The offers are easy to figure out… etc.

The offers are also clearly defined and laid out. And while I may have had some issues with how much they paid out (I will get to that in a minute), the simple fact of the matter is that you can make extra cash with it.

The cash is pretty easy to make, you can make it from anywhere, you can use the app in your downtime, and even someone who has a weird schedule can fit some app-time in here or there to make some extra money when they need it.

I could easily see you making at least $5-$10 a month with this app, if you stay consistent and keep using it. Plus, the ability to withdraw amounts as small as $1.50 with PayPal is a pretty big plus as well.

But, there were also some downsides to it for me. I felt that the amount of work required to redeem the offers was, perhaps, a bit too much. Making ten cents per review, even for a short review, isn’t very much. Plus, the waiting periods kind of took away from it for me.

I understand why Apperwall does this, and I realize that they might not have a choice. I am not knocking them for making the decision to put 7 day waiting periods on some payouts—but as a user, that does take away from the experience for me.

Writing reviews like this is a relatively unusual approach, most other offer apps have simpler tasks. The apps for InboxDollars, App Nana and Swagbucks are all examples of the more typical pattern.

This was a bit of a tough call for me, to be honest—because Apperwall does do a lot of things right. If I were in a little bit of a different situation, and didn’t care quite as much about my time, then yes—I would probably keep this app and use it more.

But I am pretty selfish about my minutes and hours—especially when it comes to making side-cash. I want my time spent to equate to as much money as possible—and I am afraid that Apperwall didn’t quite meet my criteria in this regard.

Our Final Thoughts About The Apperwall App