Can You Really Make Money With The Harris Panel App? 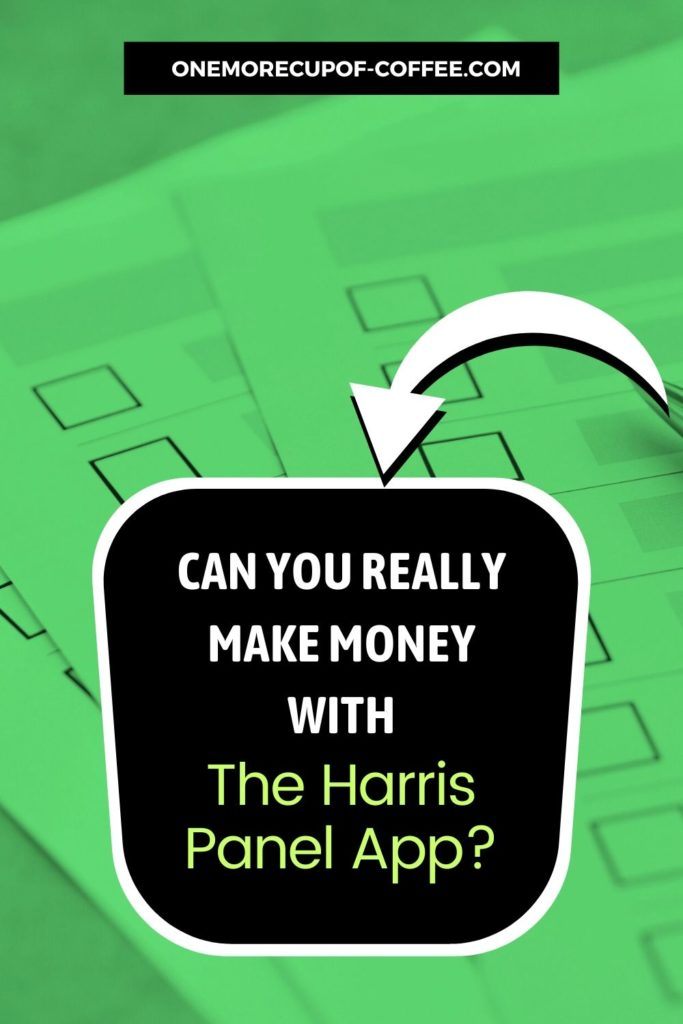 If you have never heard of the Harris Panel, then you might not immediately recognize what this app is about. But of course, our most important question was this… can you really make money with the Harris Panel App?

The tagline for the app in the Google Play store says this, which might help to explain exactly what it is…

“Now you can participate in the Harris panel from your mobile device!” 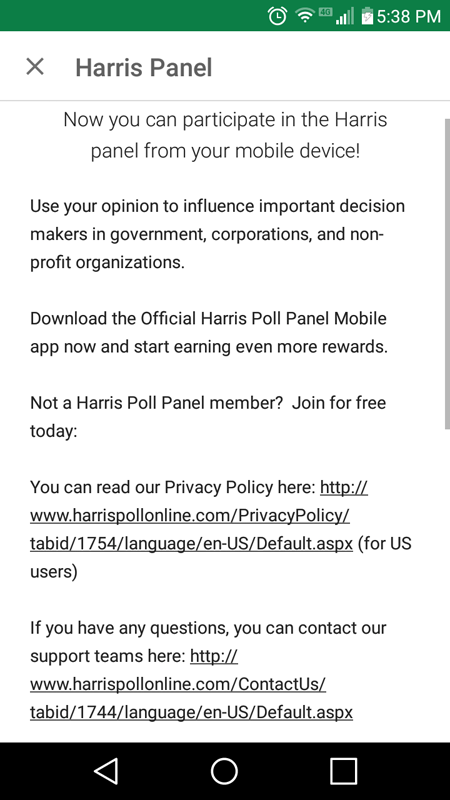 So, the Harris Poll is, according to the official poll website, “one of the oldest and most prestigious polls in the world.”

At first, I wasn’t even sure that you could use the app to access the polls if you weren’t already a member… but after opening it up and checking it out, I realized that you could, indeed, join through the app. 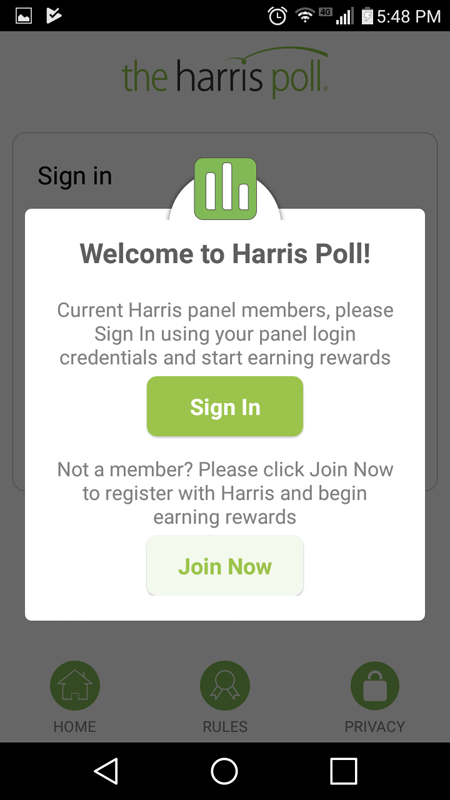 So that’s what I did next… right after taking a look at some of the vital stats. According to the Google Play Store, this app has been downloaded 100,000 times… but it only has a Google Star Rating of 2.5! 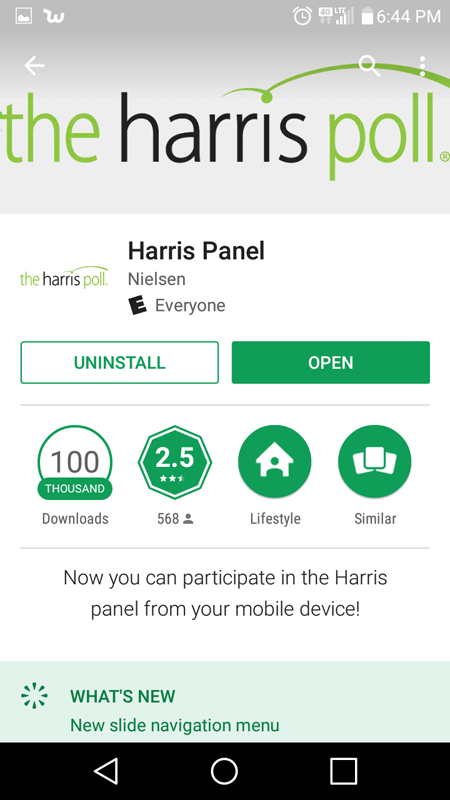 That isn’t very good, to be honest—and it concerned me a little bit. I haven’t had much luck with survey apps lately, and I was beginning to fear that this one would turn out to be another disappointment.

But then again, the Harris Poll has been around for a long time, so maybe the Google Play ratings are… a fluke?

There was only one way to find out.

So, to figure out whether this app is any good, I needed to join and take a look for myself.

The process of joining the Harris Poll through the app began by clicking the ‘Join Now’ button on the sign in screen. Here is the page we arrived at after this first step. 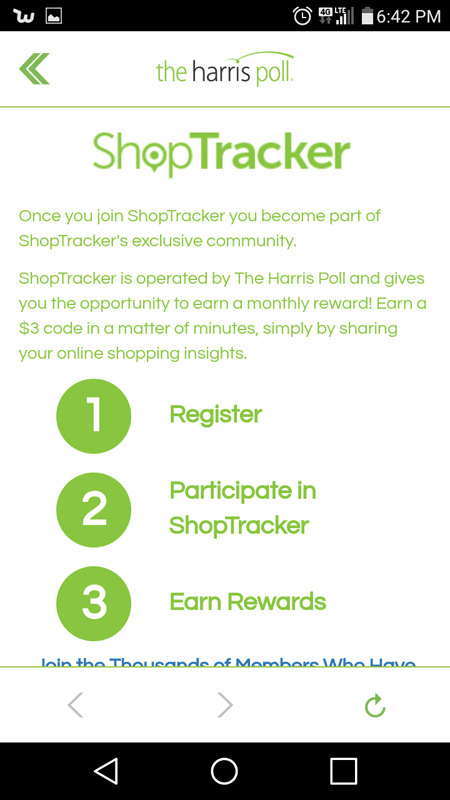 This seemed like a pretty straightforward task, which I was happy about. I gave them my email, address, zip code, and told them whether or not I had Amazon Prime (this seemed like an odd question to me, but whatever).

Once I finished all of this, I was sent back to the login screen and told to log in… which I did in pretty short order.

Once I did, I arrived at this screen. 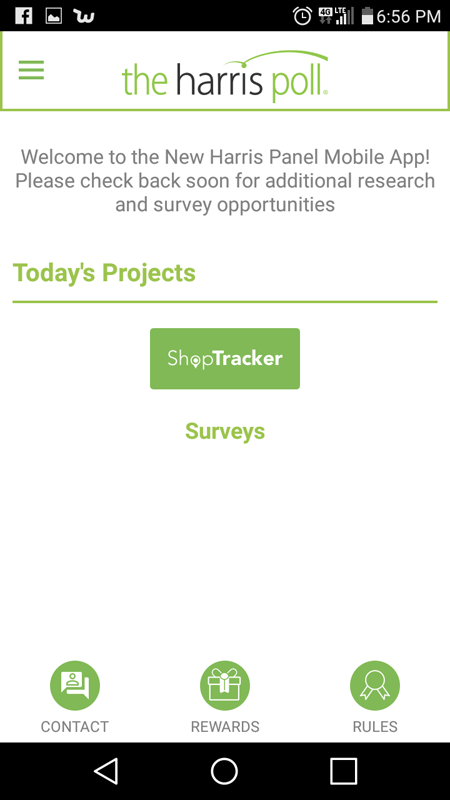 This seemed to be the main hub of the app, and I could already see that there was a button that said ‘Surveys’ located below it.

Well, I thought it was a button. I guess it was actually a title, with nothing beneath it. So instead, I clicked on the ShopTracker button, which brought me to a screen where I was asked to sign into my Amazon account.

At this point, I realized why I was asked about my Amazon membership earlier on. Apparently, ShopTracker somehow rewards you for buying things through Amazon.

And since there were apparently no surveys to do right now, I decided to research this and find out what exactly it could do for me.

So here is what I found out about ShopTracker.

What Is ShopTracker And What Does It Do?

Thankfully, there was an entire FAQ section dedicated to the ShopTracker app, so I was able to figure out exactly what it was just by doing a bit of reading.

“The Harris Poll Online Panel is performing this research to help develop a richer understanding of the internet marketplace, allowing for greater insight into how people are using their computers or mobile devices to make purchases throughout the United States.”

“… you will receive rewards for every successful upload of purchase history you provide to us (a maximum of one upload every 1 month).”

But I was unable to figure out what kind of rewards you could earn through it, which was a bit of a disappointment. So I backed out and went back to the main hub of the app, and clicked on the ‘Rewards’ button located there… but I was also met with a bit of a brick wall there too. Here is what it said… 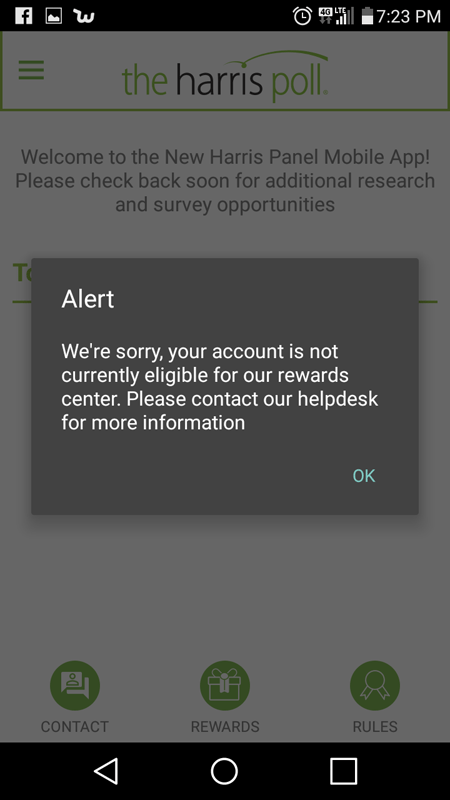 Needless to say, this was becoming a bit of a disappointment. I had joined the app, but there were no surveys to take part in, and ShopTracker, which would require me to buy products to earn rewards, didn’t seem to be telling me exactly what kinds of rewards I could earn.

So, I did the only other thing I knew to do… I visited the Google Play Reviews.

What The Google Play Reviews Said About The Harris Panel App

The Google Play Reviews for this app were not pretty. There is really no better way to say it. The vast majority of the reviews only give the app 1 star. I have seen a few bits of positive feedback, but all in all, people do not seem to like this app.

Apparently, there was an older version of the app that worked better. I heard that referenced a couple of different times in my research.

The main complaint, by far, was that people said that the app just didn’t work. It was glitchy, it didn’t let them log in, it didn’t link right to their Amazon account, etc.

But, another very common complaint involved the payouts! A lot of people said that they never got the gift cards that they were supposed to receive… even after months of waiting and trying to contact tech support.

There were A LOT of these types of reviews, too! This certainly alarmed me.

All in all, reading through the Google Play Reviews did not make me feel any better about the app, at all. Not only were there no surveys for me to take, but I was getting some pretty negative feedback from other users!

Plus, the only money I really heard anyone reference earning was in smaller amounts… ranging from $3 to $12. I mean, I didn’t read every single review… but I scrolled through the most recent reviews for several minutes, and didn’t really see more than a few reviews that had anything positive to say.

This really helped me to make up my mind about this one.

Will I Be Leaving The Harris Panel App On My Phone?

In a word, no. I know that this poll company has been around for a long time—but the initial lack of surveys that I experienced upon completing the installation and registration, coupled with the really bad reviews that I read by recent users, really turned me off to the app.

I’m not saying that this app is altogether bad, but I am saying that I am not really interested in it. I was especially concerned by the fact that so many people complained about how their money never reached them, or how it took months for them to get it.

I was also a bit alarmed by the fact that nobody really seemed to be earning anything that sounded substantial or consistent—which are obviously big factors for me when extra cash is what I’m after!

Now, with that being said, it is possible that ShopTracker could, in theory, earn you some extra cash—though how much and how often are both questions that I was unable to find an answer to, even in the Google Play reviews.

The App FAQ is pretty vague about prizes and rewards, and I was not able to get a clear picture of what I stood to gain from using it.

Maybe if the app was given some time, the problems could be overcome—but I have not had super good experiences with many survey apps, and I have definitely already tried apps that just straight-up performed better than this one seems to.

No offense to the Harris Poll, but I think that I might skip out on this one. There are plenty of other apps out there for earning money that work better than the Harris Panel app seems to, like MintCoins, Tapporo and CashPirate.

Edit: After I had already finished writing this review, I received an Email from Harris Poll, telling me this… 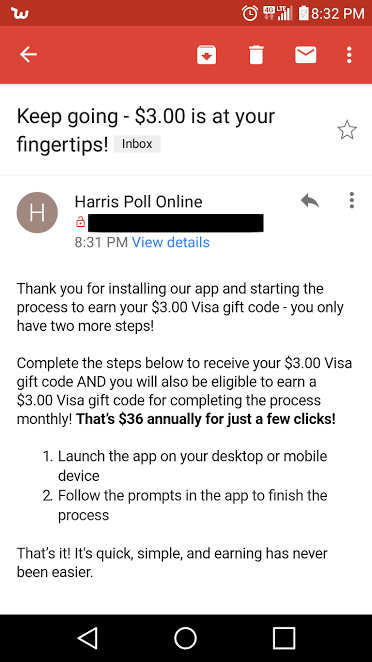 It made my outlook a little better, but it didn’t change my overall decision about the app. $36 yearly simply isn’t enough to persuade me to leave the app on my phone, especially when there are other apps out there that could earn me a lot more for my time, phone space, and energy.

Our Final Thoughts About The Harris Panel App