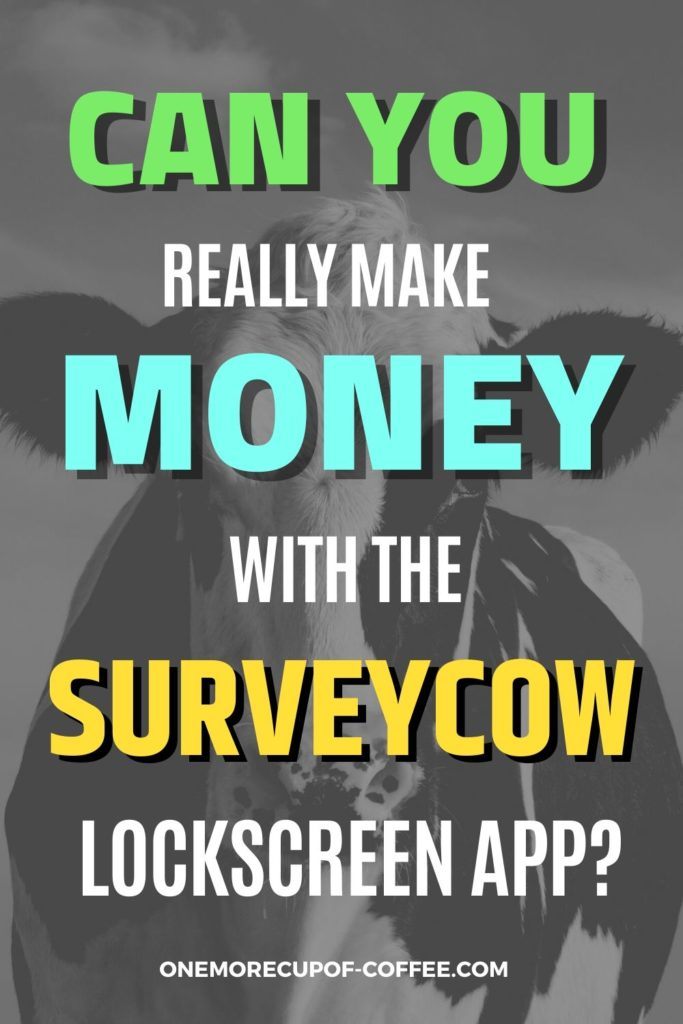 This app says that you can answer mini-surveys on the Lockscreen and get cash. But can you really make money with the SurveyCow Lockscreen app?

It's offered as a free download on the Google Play Store, has been downloaded by 50,000 users, and has a 4.0 star rating. 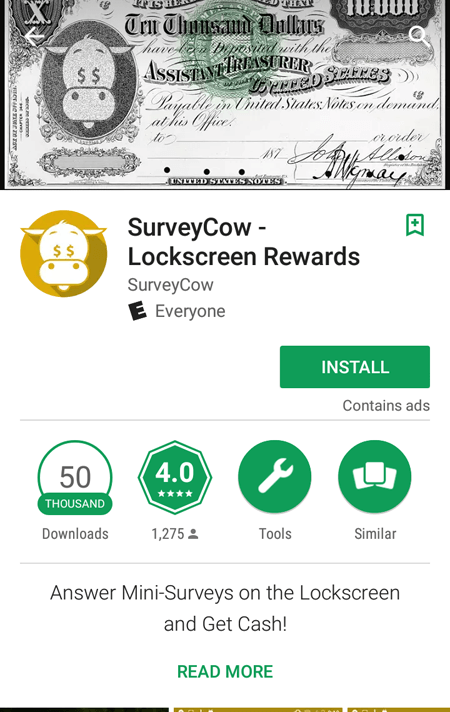 It is apparent on the landing screen of the app listing that this is a lock screen app that also lets you take mini-surveys. But what caught my attention was that it promised to pay cash… and that is exactly what I’m looking for.

Before we look at SurveyCow itself, let's talk about why we're focusing on the app to begin with.

If you have read many of my other app reviews, you will know that I am searching for a side hustle. I love the idea of using an app as a side-hustle, because we take our mobile phones with us everywhere.

We literally have access to our phones and our apps 24/7… so wouldn’t it be awesome if we could make some extra cash, using an app, in our spare time?

Of course, this is sometimes easier said than done.

There are a lot of apps out there that promise to pay cash, and do… but most of them do not pay out enough to make them worth the time or trouble.

And that, unfortunately, seems to be the case with the most lock screen and/or survey apps that I end up trying.

But, I am always willing to try something new, and I decided to give SurveyCow a try because it really did catch my attention. I am actually not opposed to the idea of a lockscreen app that works.

I just don’t want to install a lockscreen app that is going to bog down my ability to use a phone without paying me enough to make it worth my time.

So in this review, I am going to tell you what I discovered when I looked into the SurveyCow lockscreen app. This is what I learned, and what you need to know.

When I first opened up the app, I was greeted with a screen that said this.

“Earn PayPal Credit: Answer a mini-survey question when checking the time and get ‘beef’ redeemable, for PayPal credit.”

Ok, so this was pretty self-explanatory. I find it funny that it is named after cows, and that the points are called ‘beef.’ (Who comes up with this stuff?)

I scrolled through a couple more screens, and learned a few other things as well. I learned…

This all seemed pretty straightforward, so I decided to go ahead and sign up. The only way to actually sign up for the app was the do so using a Google account. So I chose the applicable account on my end and completed the process… which was literally just one button push.

And at that point, it seems that I was taken to what appeared to be the inside of the app. It was pretty simple, and contained a few buttons and tabs… including a link to a FAQ page!

I also became aware of the fact that I now had a lockscreen on my phone. It showed the time at the top, along with the date… but then right below this information, there was a survey question that I could answer. There were also ads, and a ‘quick unlock’ located toward the bottom.

I tried the quick unlock first, and realized that this would take me to another ad. And finally, after exiting out of this ad, I could make it back to my own phone screen. 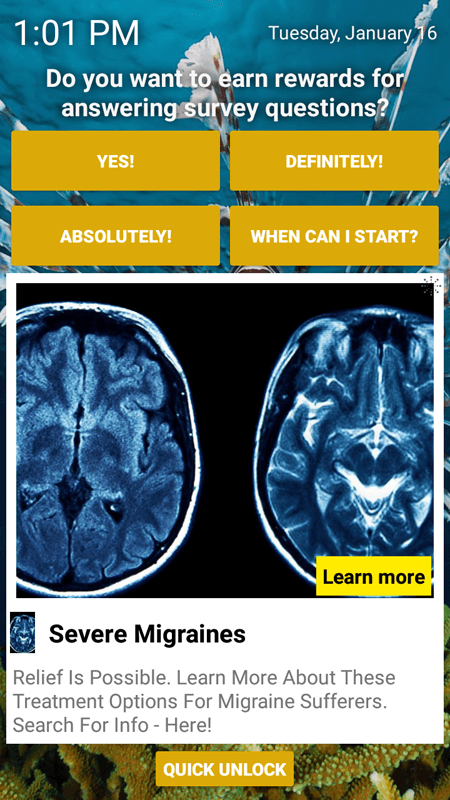 I started answering questions on my lock screen, and realized that when you do answer a question, you end up going right to the inside of your phone about 50% of the time. The other 50% of the time, you still have to click through an advertisement to unlock it.

According to the app, I had already earned 100 beef points. But I didn’t know how many points I was getting for answering these questions. The app said that it could take 24 hours for my beef points to actually show up, so I wanted to check out the FAQ and see what that said.

Checking Out The FAQ Page On SurveyCow

I took a look at the FAQ page, and learned a few interesting things about the app here, but nothing that really stuck out to me as super interesting.

They do ask repeat questions for a few different reasons, sometimes to make sure that people are answering honestly.

Anyway, they were pretty vague about how much you can plan to make with every question answer. I learned that you need 10,000 beef to cash out, but couldn’t figure out how much this equated to in real-world currency.

So I decided to check the reviews to see if there was any more useful information located there.

Checking Out The SurveyCow Reviews On Google Play

I checked out the reviews, and found that a lot of them (especially more recently) were positive. I also found out quite a bit about the points. It sounds like each question basically awards you one point.

Here are some reviews I found that seem to validate this. 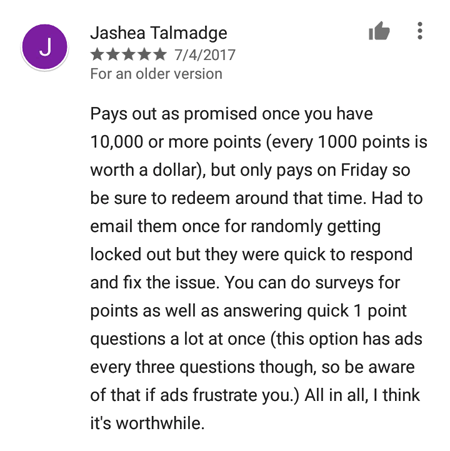 At any rate, I felt like I had learned enough about SurveyCow to know if it was going to work for me or not.

How Did SurveyCow Perform Technically?

I used this app for quite a while, and was not unhappy with how it performed. The number of ads did get a little bit frustrating, but this wasn’t a huge issue. All in all, SurveyCow performed pretty well on a technical level.

My Personal Feelings About The SurveyCow App

Personally, I kind of liked this app… but I will also say that I don’t feel like it really measures up to what I need in a side-hustle app. For one thing, having the extra ads mixed in, around, and after some of the survey questions really took their toll on my patience.

It was quite inconvenient to answer a survey question, and then to have to deal with a pop-up ad at the same time.

I will also say that I was not a huge fan of the amount of money the app pays out. It would take the average person more than a month to earn enough to get a payout… and to me, the inconvenience just didn’t outweigh the benefits.

I really do like the idea of lockscreen apps. I truly do. I just can’t get behind them because, so often, they bog down the use of my cell phone and make it less efficient… and I can’t really handle anything that takes efficiency away from my mobile device.

On the upside, it functioned rather well, and I will actually say that it is one of the ‘better’ lockscreen apps that I have tried.

I like how it just asks one question at a time instead of taking you through an entire survey. If it only paid out a little bit better, and didn’t contain so many ads, it would actually be pretty perfect.

But, I realize that SurveyCow, like every other company, needs to make ends meet—so that is probably why they need to keep the advertisements going.

I heard some stories about how people were unable to get their payout. I am not sure what is going on here, but SurveyCow does not seem like a sketchy app, and from the sound of it, their customer service isn’t bad either.

It sounds like the company has fixed this, for the most part, and that they will help you if you contact them after it has happened to you… but once again, it just sounds like a potential problem that could slow things down even further.

So yeah. If you want a cool lockscreen, you should try SurveyCow. But if you want a quality side hustle that will earn you some sweet extra cash, then I am afraid that this site may not be the best one to bank on.

You could consider another lockscreen app instead, as some of the other options work well, such as Unlock & Win, Adme, and Fronto.

Our Final Thoughts About The SurveyCow App

Should you download it and use it on your phone to earn some extra money?