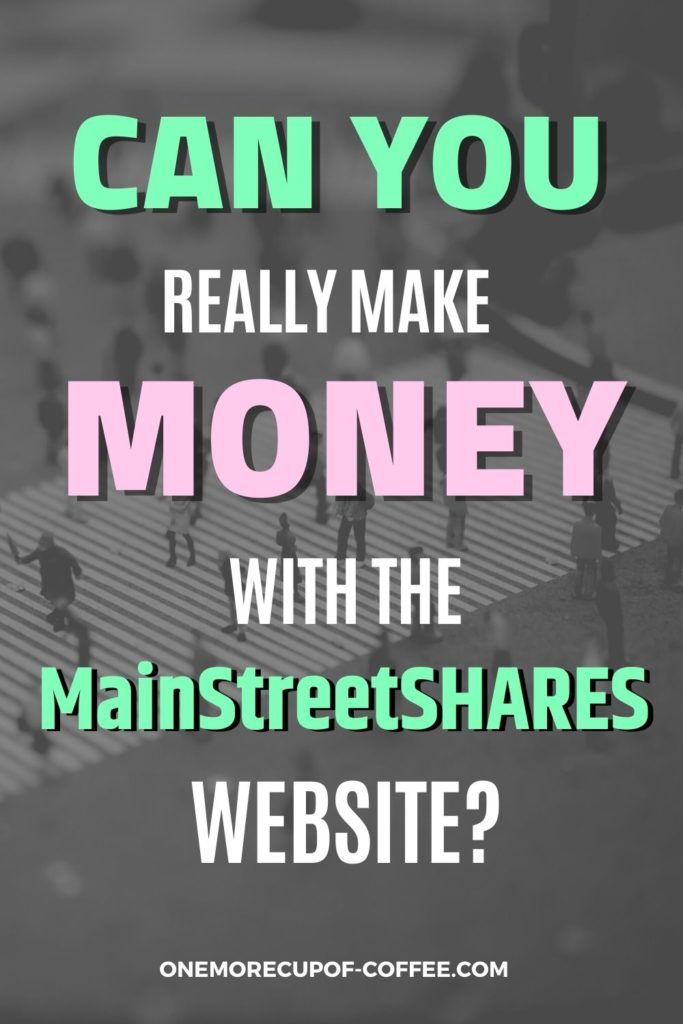 We found this website while searching for online side-hustles that could make us some extra cash. This site in-particular struck me as interesting, because I wasn’t actually sure how you would use it to begin with… so it caught my interest for that reason as well. But can you really make money with the MainStreetSHARES website?

This is the biggest question… so that is what I decided to figure out.

Here is what I discovered over the course of my research.

SPOILER!!! For those of you who don’t know, MainStreetSHARES.com is actually closing down. You will not be able to use it or join it… but I didn’t know that before I started working on this review. So the beginning of this review deals with the site that it used to be. The second part deals with the concept, and what I thought about it.

But if you are hoping to make money using this particular site, I am afraid that you are going to be disappointed… as the site is no longer functioning.

Thankfully, there are other survey sites out there, like Survey Junkie, YouGov and Panel Station, along with other ways to make money.

While MainStreetSHARES is no longer in business, let's take a look at what I found during my initial research.

Getting Started: What Is MainStreetSHARES?

The homepage of MainStreetSHARES says this in a banner across the top of the page.

“Go beyond cash back. Share profit and earn shares.”

There was also a ‘learn more’ button right on this banner… so I clicked that to see if I could find out more by using it.

And the button didn’t lie. Here is what I discovered. 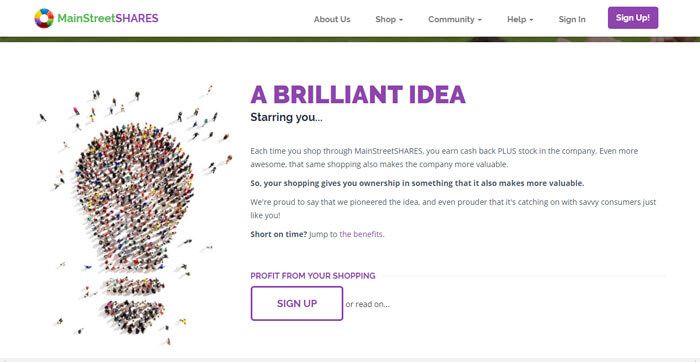 This is the page I was sent to. And to be honest, I learned a lot here. Basically, you shop through this website… and when you do, you earn not just cash back, but also stock in the company.

This may sound complex to you. It did to me. But it is apparently a new concept. You get involved with the site, you gain stock, you buy from the company, which makes the company more valuable.

I scrolled down a bit further, and actually found out even more about how all of this works. I will admit that I had questions about how exactly you benefit from MainStreetSHARES… but here is what I found out.

How Do You Actually Benefit From Using MainStreetSHARES?

Here is the short-list of reasons to use MainStreetSHARES, according to the website.

The company also has a ‘game plan’ that they have in place for their users. Here is what this plan is, in basic language.

Granted, this is a pretty bold long-term plan. The language on the main site is even bolder. I have to hand it to this company… they have a solid plan in place. Will it work? Maybe. If it doesn’t, you will probably end up just getting some savings based on shopping through the site, and nothing else.

Best case scenario? You get a lot of value by shopping a lot through the site, and reap huge payouts when someone acquires it.

Which way do I think it will go? That is anybody’s guess. I decided to keep looking inside of the site to see what I could find. Maybe joining it could help me to gain a better perspective.

I clicked the ‘Sign Up’ button, and immediately learned the most important bit of information yet. Here is what I found. 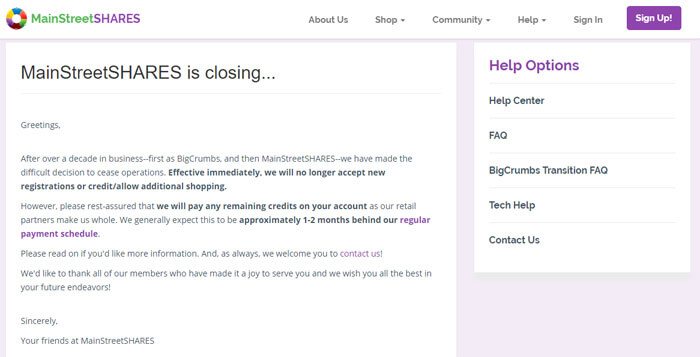 So, as it turns out, this idea must not have worked. Or, it worked out really well. At any rate, what ended up happening was that the website decided to shut down… and either they are getting ready to pay out, or have already done so, and what I was seeing was just the leftover remains of what was once MainStreetSHARES.

One thing that I will say is that this site used to be BigCrumbs. That is actually one of the things that led me to it. I started out looking for BigCrumbs, and was lead here through a link.

Do I like the idea behind this website? If I were to come across a new site that operated similarly, would I use it?

Here are my thoughts.

My Personal Feelings About MainStreetSHARES

On one hand, I almost felt like it was pointless to do much thinking about this… because the site is closed down. But on the other, I must also ask this question.

Could such a site possibly work and make anyone any great deal of money?

I did some research to see if the site ended up being a success or a failure… and of everything I found (which wasn’t much), this is what seemed to be the case.

It seemed that the site actually only ended less than a year before I started this review. Also, in the end, the share-value of the site ended up not ‘being worth much of anything’ according to reviewers. Here is a quote from the MainStreetSHARES site itself…

“msSHARES represented an agreement that allowed members an opportunity to financially benefit in the event that MainStreetSHARES was acquired. Unfortunately, as MainStreetSHARES has not been acquired, your msSHARES will not deliver you the benefit we'd hoped.”

The site did pay out their final payouts, as stated on their page… but that is that.

So yeah. According to what reviews I could find, this site was not necessarily a success.

So what do I think about that?

Well, first of all, I like the concept… though I will admit that I found it quite bold, even just to read about. It also seems a little bit far-fetched to think that share owners would be able to inject enough value into the site to even make the shares worthwhile to them.

But, at the same time, why not? Why not get something for doing all of your shopping somewhere? If you were going to shop for groceries at a local store, wouldn’t you feel better about it if you owned some stock in the company?

This process was admittedly difficult to understand in reading… but according to reviews, the site did a pretty good job of keeping everything up to date in the account information. After looking through it, as it turns out, understanding it was much easier.

Would I Use A Site Like This If One Came Out In The Future?

This is a very good question… but I would say ‘maybe.’ According to reviews, this website gave shoppers access to over a thousand different stores—and that is pretty cool. That means that it was likely possible to buy a lot of different products through MainStreetSHARES.

And if they get you a discount on most items, and shareholder value without charging you extra (which they didn’t), then it stands to reason that the benefits should have been apparent, right?

I guess the biggest potential downside, to me, would have been this.

Would the site have made shopping easy enough that you would have used it often enough to make it worth the time?

I mean, it is really easy to just run across town to pick up something you need. I am not a huge internet shopper, though I do use the internet to shop quite often.

To be fair, this is not as much an issue with just this site as it is with every shopping discount site. These sites can offer a lot of value… but really, how much are you going to be ordering from them?

This is why shopping sites are usually not on my radar as side-hustles that pay off in the long run. But… it all depends on the site and the shopper. Every situation is a little bit different.

Should You Join It And Try To Make Some Money?