Can You Really Make Money With The Panel PayDay Website? 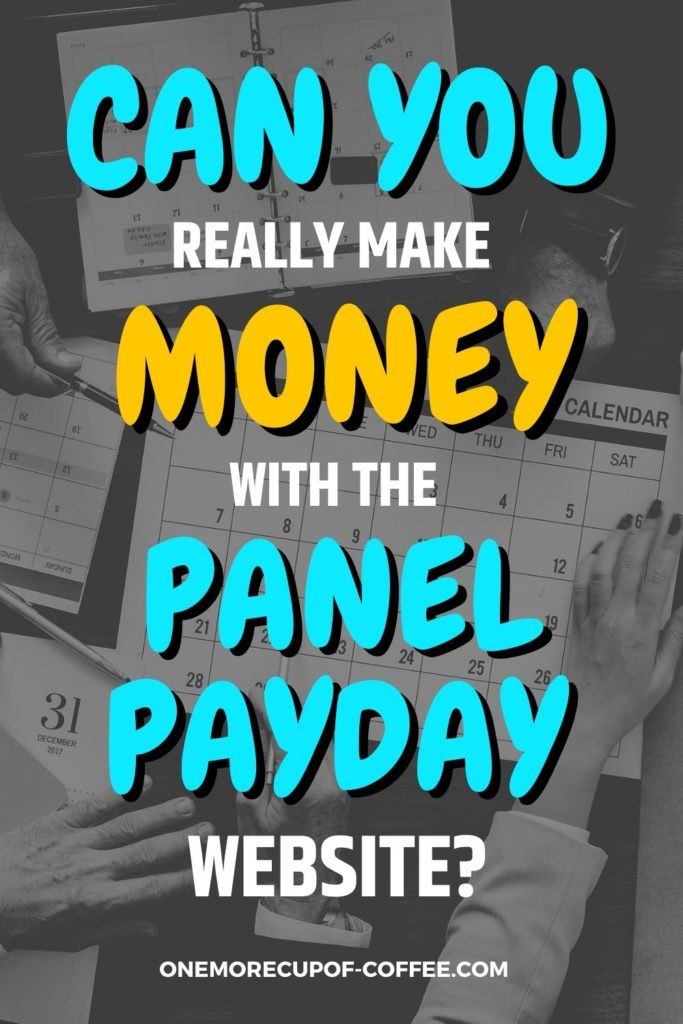 This survey site promises to pay out some pretty serious cash for surveys. But can you really make money on the Panel PayDay website, or is it more of a cheap gimmick?

I review a lot of survey websites in my spare time… but I do it for a very specific reason. I am determined to find every awesome side-hustle that exists online, and I have a theory about survey websites.

I think that survey websites are one of the most likely types of sites to make good side-hustles, because they actually have a lot to offer (in theory).

Think about it. Survey sites offer you the chance to make some extra cash whenever you have the time… which makes them flexible. And the good ones offer fairly consistent work, for the most part—which means that they are also offering consistency.

These are two of the three main components that every good side hustle needs to be comprised of in order to be effective.

The third, however, is a bit more difficult to come by where online survey sites are concerned.

As it turns out, there are not that many online surveys sites that offer real profitability. Most of them do pay out… but in such small amounts that they are not practical for long-term use as real side-hustles.

But will PanelPayDay.com be the site that rises above?

On the landing page, they do say some pretty hopeful things. For example, they say that you can earn $25-$75 per survey. That’s certainly above average. Not many survey sites pay out that well. I’ve reviewed a LOT of these types of sites that barely paid out $2 per survey.

So what makes this one different?

I decided to do some research, in an attempt to figure that out. Here’s what I found.

To start with, I wanted to check out the FAQ… which is usually standard procedure for me before I actually sign up with a site.

First of all, I will say that I was pleased that this site even had a FAQ. Some websites that I review don’t even have one, which makes it pretty difficult to get all of the information I need. So kudos to Panel PayDay on that detail!

Second, I will say that I learned quite a bit on this FAQ page. I learned that after you sign up, you can usually expect to receive your first survey within a week or two.

I also found out that this site offers its users a ‘survey directory page’ where you can sign up for the top 25 survey sites on the internet. I wasn’t completely sure why this site offered this… but they did.

And they also say that once you register with all of these, you will receive ‘many paid surveys that will keep you very busy.’

Next, I found out that this site offers about 2 to 4 paid surveys each month. I will be the first to say that this doesn’t seem like much. I mean, if I am going to be spending my time on a survey site like this, I need to know that I am going to be able to make enough to make it worth my time. So yeah… this was a detail that I wasn’t particularly fond of.

But at the same time, I was also happy that they actually gave a solid number range here. So well done to them on that front. Plus, they let you know when surveys become available… so it's not like you have to waste time ‘waiting around' and continually checking the site.

Next, I learned that there are two different types of surveys sent out on this site. There are ‘test’ surveys, where prizes are offered as rewards instead of cash… and there are ‘real’ surveys where cash will be offered.

The Test surveys only take a few minutes to complete, and are intended to find the most serious survey-takers so that those members can be the recipients of the more ‘intense’ paid surveys. This was interesting to me. I am glad that Panel PayDay said something about it in the FAQ.

How Much Do Surveys Pay Out On PanelPayDay.com?

This is obviously a very important question, but I was relieved to see that I wouldn’t need to chase the answer to the far corners of the internet. It was readily provided on the FAQ section of the website. Once again, I say major kudos to this company for offering so much information right on their FAQ page.

Survey payouts vary according to the length of the survey. But according to the site, the short surveys pay out $10 or so, while focus group studies/surveys might actually pay out something closer to $150.

You are obviously given the option to pick and choose what surveys you take part in… so you could, in theory, skip out on the cheaper ones and just go for the higher-priced ones, though that would also limit the amount of money that you could actually make.

You will also know up-front what the payout is for any survey that you may choose to take part in.

One unique thing that I noticed was that PanelPayDay.com does not actually pay you directly for the surveys. Instead, the company that requested the survey will send you a check directly for your participation.

It can take a few weeks to actually receive this check, though they also say that some of the companies they work with are now using PayPal, which speeds up the process quite a bit.

How Does PanelPayDay.com Make Its Money?

This was the first question on my mind when I realized that the company offers memberships for free. And it was reinforced when I discovered that they did not send out payments directly.

Why does this website exist? How do they make any money?

As it turns out, this company is able to keep membership free by charging their partners for pairing them with quality survey-takers. So yeah… that’s how they get it done.

The Main Upsides To This Survey Site

My favorite things about this site were this.

First of all, I liked how much they paid out. I also liked how they will help you to join other top survey sites. This does seem a bit gimmicky, because they must be making some kind of commission off of it or something… but whatever. Maybe they are legitimately trying to serve their membership group.

If so, this is actually very smart of them.

Secondly, I like how professional the site seems to be. All of the content was very well done, the site design was great, and I liked how ‘concise’ everything was. I really didn’t have a question that didn’t get answered in the FAQ… and for that, PanelPayDay.com deserves a serious two-thumbs-up.

And finally, I love how flexible and consistent the site is. I really like how they offer surveys every month, and how these surveys can pay out pretty well.

The Main Downsides To PanelPayDay.com

The main downsides to this site, as far as I was concerned, were as follows.

For one, I didn’t like that this site didn’t send out more than about 1-4 surveys per month. Granted, if they do send out 4 a month, that is one a week… and that is not too bad.

But in order for it to give us the profitability we need to qualify it as a serious side-hustle, there would need to be some more work for those who are committed.

And honestly, most survey sites don't send out many surveys at all. For example, Opinion Square sends out a similar amount, while SurveyMini averages just two surveys per month.

My Personal Feelings About PanelPayDay.com

My personal feelings about this site are this… that it has a ton of potential, but that it is also maybe not where I would need it to be to take it really seriously.

This is honestly one of the better review sites that I have actually looked into as of late. But what kept me hesitating was the seeming lack of consistent survey work.

I, personally, am looking for a pretty serious side hustle. And yes, this site has the potential to offer that… but it is still a bit unknown whether or not I could count on it for consistency.

If you are into survey websites, then you should definitely give this one a try. But will it actually deliver, in a serious way, for those of us who are looking for a hardcore side-hustle?

I’m afraid that it may miss the mark by a bit on that count.

Should you sign up and use it to start earning some extra money?