Can You Really Make Money With The Panel Station App? 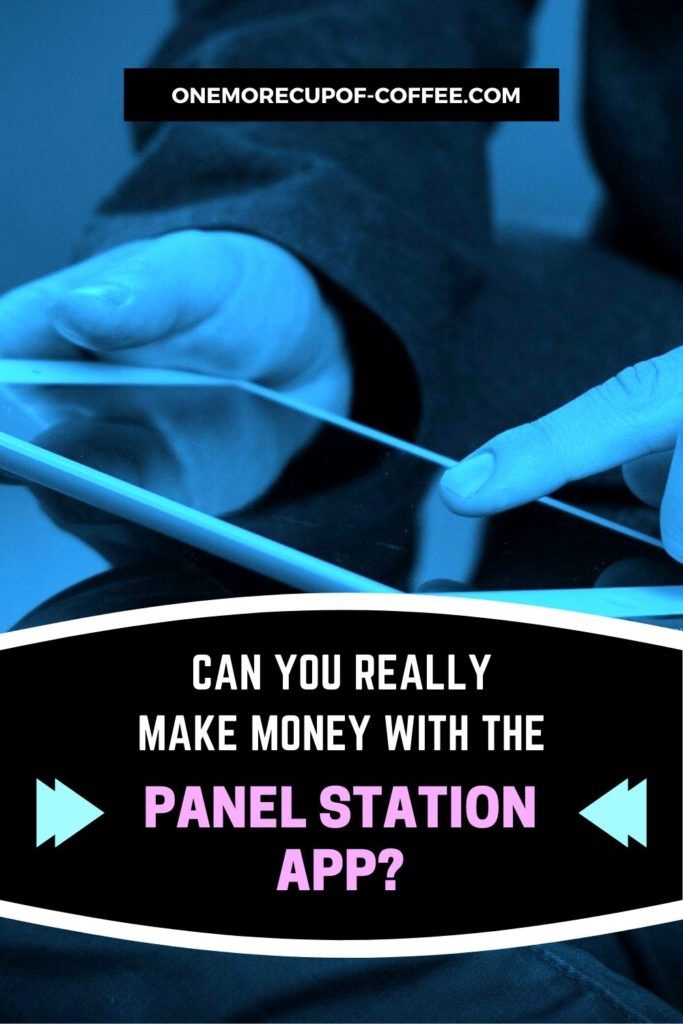 I found this app while I was researching new and ingenious ways to earn side-hustle cash in my spare time. But can you really make money with the Panel Station App?

The first thing we need to think about is the app itself. The Panel Station App had pretty good Google Play stats. It has a 3.5 star rating, and had been downloaded 1 million times. I also liked the goofy-sort of artwork featured in the title section. 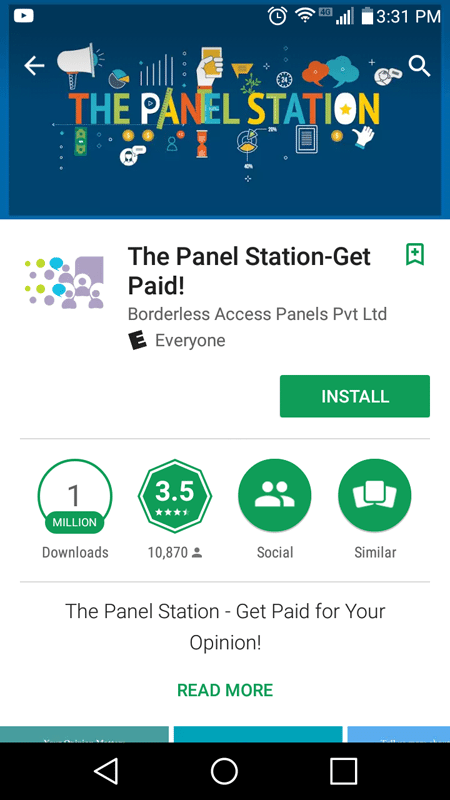 I also liked the fact that the app had so many downloads. Nowadays, not all downloads recorded in the Google Play store are legitimate… but this is still a pretty good indication of an app being popular, or at least having a pretty big audience.

But I almost never judge apps like this by what I find on the outside, so I was determined to download it for myself and dive right in. I love trying out new apps like this. I’m all about the side-hustle mentality, and apps can provide a rather unique method for allowing you to earn extra cash, for a few reasons.

For one, they are mobile. And that is probably the best part of it for me. I like to be able to earn extra cash on my own time, from wherever I happen to be—and when I get the opportunity to download an app that promises to help me earn some money on the side, I usually jump on it.

Of course, based on the reviews that I write, you probably know that it can be difficult to find apps that are actually worth the time. But, as always, I was hopeful when I came across The Panel Station App.

Based on the name, I was pretty sure that this was a survey app… and in the past, I haven’t had the best luck with apps in this category.

But I tried it out nonetheless.

Opening Up The Panel Station App For The First Time

It worked without a hitch, and I was quickly taken to this page, where I was asked to fill out some basic information about myself. 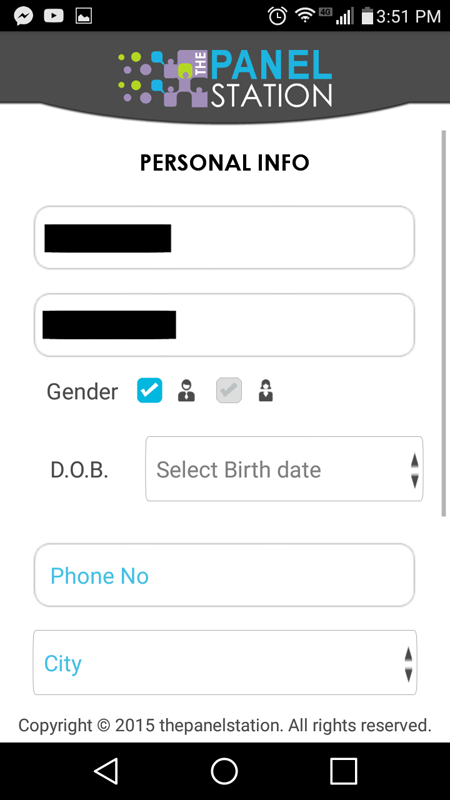 I filled all of this in, but the space where I was supposed to input the name of the city I lived in was really weird. There were a lot of names that I could scroll through, but they were weird… like, I had never even heard of most of them.

I’m not sure what they were based on either, because it wasn’t like there was a list of the biggest cities in the US or anything like that. It seemed like just a bunch of random city names.

When I tried to type my city name into the field, I didn’t get any response. There were no cities ‘available’ by that name, so I had to click ‘other.’

Then, it said that my registration failed. 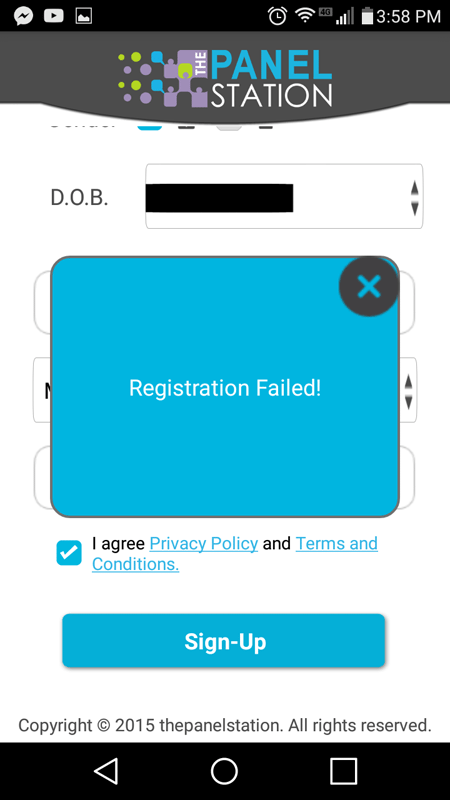 So, I backed out and decided to try the process again, just to make sure that I wasn’t doing something wrong.

This time, I tried to sign in using just my email address. But once again, after filling out the information, I came to the ‘registration failed' screen.

This was beginning to get really frustrating.

I went back and tried everything I could possibly think of to get signed up and into the app… but no bananas. Try as I might, I could not get this app to let me register!

Just to find out exactly what was going on here, I decided to go take a look at the Google Play Reviews. Sometimes, reading about the experiences of other users can do a lot to help me gain insight into my own problems with a particular app—so that’s what I did next.

Checking Out The Google Reviews For The Panel Station App

Alright, as I started sifting through the reviews, I came across this. It seems to be at least one clue into what might be going on as I try to use the app.

Apparently, the app has been updated semi-recently, and that started causing problems.

I'm not sure if my problems had to do with the update… but I understand this user's frustration.

Another review I read, however, seemed somewhat similar to what I was experiencing. For this person, it seems that the app told them that their password was wrong.

Your sentiment mirrors my own in this situation, fellow app user.

And here is another.

As I read through these reviews, it became very clear that reviews like this were super common. The app does have more 5 star reviews than 1 star reviews, but I have seen very few written-out 5 star reviews.

Does this mean that it is possible that the 5 star reviews are not all completely legitimate? You would think that people having good experiences would write more about them… but I just didn’t see much of that here.

I mean, I didn’t have the time to go through every single Google Play review… but by the time I had gotten done doing my research here, I was more than a bit frustrated. I felt like my time had been utterly wasted by The Panel Station app. This is actually the second time in a row that an app has done this to me.

I am so tired of not even being able to sign in correctly to the app that I want to use. It is truly, truly frustrating. Why can’t developers do a better job than this? Why can’t they find the resources to at least make an app that works? That is my question. It doesn’t seem like it would be that difficult of a problem to figure out.

Don’t do it. Avoid it at all costs. I had an awful experience with this app. It just didn’t work. I literally couldn’t get past the sign-up section. The fields didn’t work right… the city selection didn’t seem right… there were just a lot of thing about the sign-up process that didn’t make sense.

I tried to sign up using my Facebook login information, and even that didn’t work… and that is usually a foolproof method for avoiding problems.

I am not sure why this app has the good reputation it has. I think it is because most people don’t necessarily have a sign-in problem. I am not sure why I did, but it was frustrating enough that it immediately rendered the app not worth it to me.

Besides, there are so many other similar apps to check out. Tapporo, Unlock & Win, I-Say and Instant Rewards are just some examples.

Notes On Earning Extra Cash On The Side Using Apps

I do like the idea of earning extra money with apps, but it is difficult to do consistently. Some apps do a good job of being flexible, and allow you to earn on basically your own terms. But far more do a poor job of it.

The problem with most apps is that they either…

Either case is pretty bad news, to be completely honest.

So if you want to earn side cash, you need to find a way to do it that isn’t going to completely hurt you in the time department.

You also need to find a way to do it on your terms.

Apps can sometimes fit into this in the sense that they can be pretty flexible—but they often fail to provide you with enough cash to make your time-investment worthwhile.

So in seeking a side-hustle option, I always make sure to look at exactly what I will be getting from my time investment. I don’t have time for nonsense or plans that don’t at least have a decent shot at working.

Probably very much like you, I am already strapped for time as it is. So apps like this, that don’t even give me the opportunity to try them out, can be especially frustrating.

Our Final Thoughts About The Panel Station App