Can You Really Make Money With The Receipt Hog App? 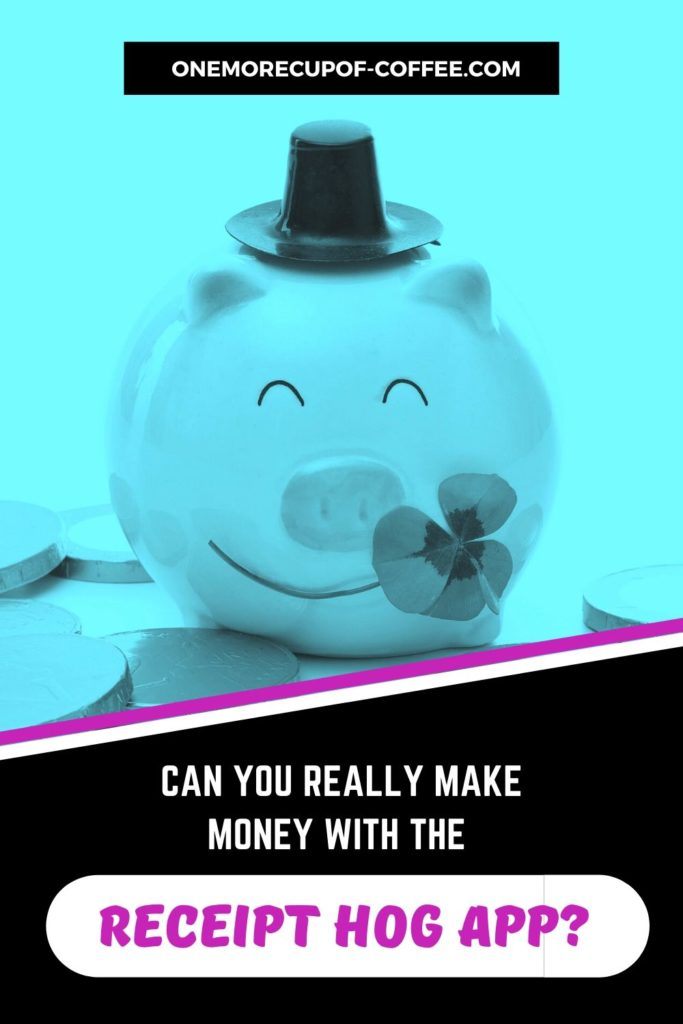 This is an interesting app that gives you a way to earn some extra cash. It’s also got 4.4 stars in the Google Play Ratings, which is pretty cool! But can you really make money with the Receipt Hog app, or is it just another gimmicky mobile program that will mostly waste your time?

We’ve heard a lot of good things about it, so we decided to download it ourselves and give it a try.

To kick off with, we need to talk about what the Receipt Hog app is and how it is designed to work.

“Start earning real cash for your receipts with Receipt Hog.”

Earning money from receipts, no matter the store sounds a lot better than something like Walmart Savings Catcher, which only rewards you for Walmart shopping! It’s been downloaded over 1 million times, has been reviewed by nearly 50,000 people and seems to have a very positive reputation in Google Play.

I opened up the ‘Read More’ section of the app, and found this nifty ‘How It Works,’ piece there that does a good job of explaining how the app works. 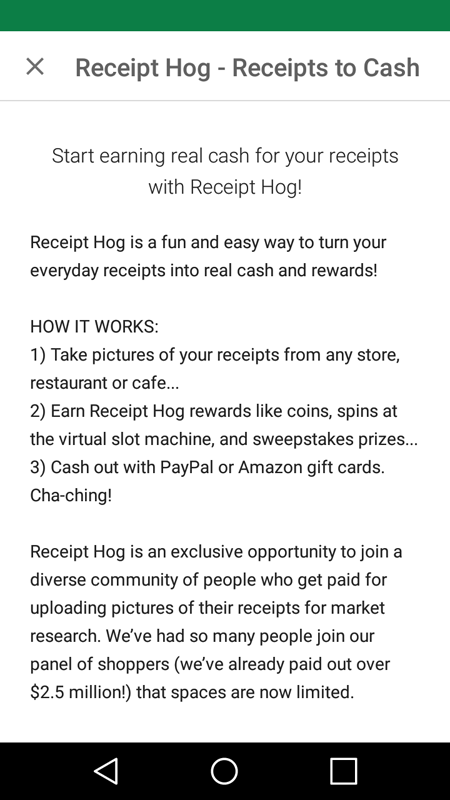 But we still wanted to try it for ourselves. So next, we opened up the app and get started. Here’s the screen that greeted us when we first opened it up. 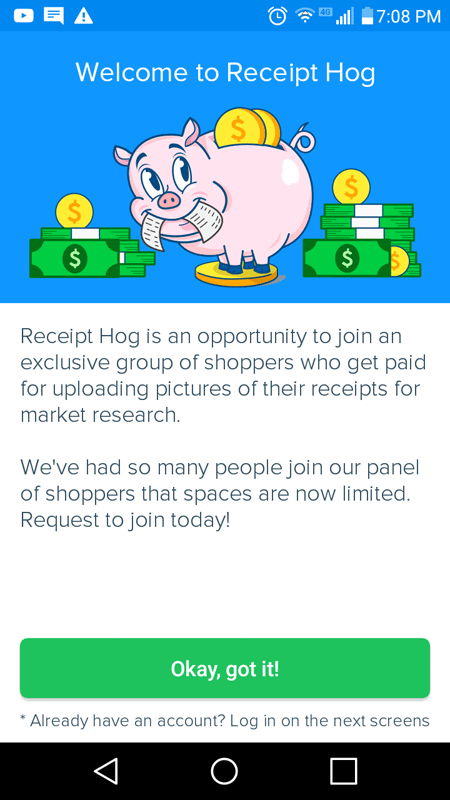 I was surprised to find that the app is so popular. They said in this intro screen that so many people have joined their panel that spaces are now limited… which surprised me a bit. I was suddenly wondering if I was even going to get to use the app… but I clicked on the ‘Okay, got it’ button and got started anyway.

Getting Started With Receipt Hog

The first screen I came to was a simple login/sign up screen. I clicked on the sign-up button, and was taken to a page that told me that I could ‘Request to Join.’ I chose to use Facebook to log in, as that is usually a lot easier. I will admit that I was a bit nervous about whether I would get to join or not.

But after I clicked the button, I was greeted with a congratulations screen that told me that I would get to join—which was awesome! The next screen that I arrived at looked like this… 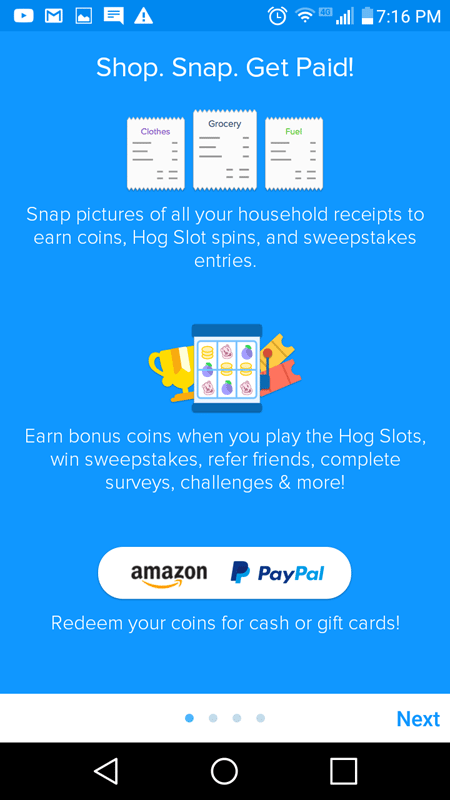 I scrolled through a few screens that basically told me more about what Receipt Hog did, and then clicked ‘done’ to get to my profile. 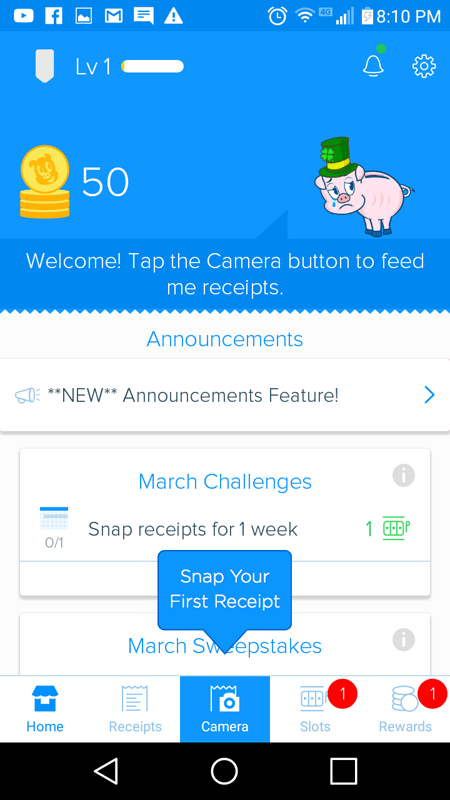 I found it funny that the hog looked sad and skinny! The point of the app is to feed the pig your receipts so that he gets fat and happy. To do this, you basically ‘fill him up' with coins that you can then cash-in for prizes and money, etc.

It’s kind of corny, but really, the whole concept of the app sounds really silly and fun. I’ve read a lot of really positive things about it in the Google Play Reviews, and a lot of people say that ‘feeding the pig’ is a super fun part of the experience.

But next, I decided to take a look around the app and see what all I could find.

An Inside Look At The Receipt Hog App

The first thing I noticed was that you have a level at the top left of the screen. You start at level 1, and move up by feeding your pig with receipts on a daily basis until you level up.

Leveling up eventually gets you other perks and coins, which is awesome. There are also games called ‘hog slots’ that you can play, where you bet a currency called ‘slot spins’ for a chance to get coins.

This was kind of a fun little feature of the app. Some people win a lot of coins this way, though I doubt that many people hit a huge ‘jackpot’ with it. I won 2 coins on my first pull, which seemed pretty good!

You can get new slot spins either by leveling up or by submitting receipts from certain stores.

You can also win coins by doing a number of other little things. Connecting your Email to your Receipt Hog App, for example, can earn you 100 coins. Completing a questionnaire can earn you 30 extra coins… etc. etc.

They also talk about inputting receipts from different types of stores. Receipts from electronic stores, clothing stores, restaurants, and phone dealerships can all level you up and earn you more cash.

How Much Can You Really Make With The Receipt Hog App?

Snapping in your receipts is as simple as using the camera button on the bottom of the app screen. The app goes through a list of requirements that help you to understand how to get the best picture of your receipt, which is honestly pretty cool.

This was about 3 screens long and allowed you to swipe through them pretty quickly. But after I had gone through them, I had a much better idea of how to upload receipts than I did before!

Here’s a picture of what the receipt-snapping process looked like. 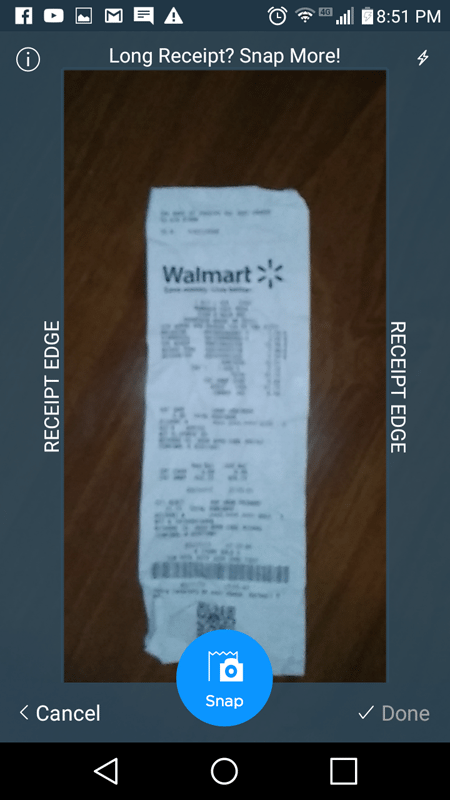 This was pretty easy, but it did take some time for the receipts to process. The app recognized that they were from Wal-Mart, but they were still processing by the time I decided to find out how much the coins were worth in real-world currency.

So I went to this part of the app and found out that there are basically 3 different options for redeeming coins. You can get Amazon Gift Card Money, cash through PayPal, or magazine subscriptions. Here is a screenshot of what the conversion rate is for the coins. 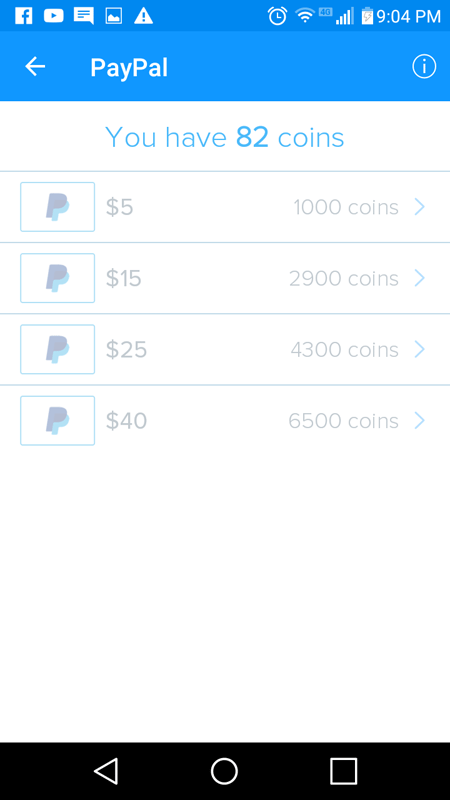 I had to verify my device, verify my email, and take a short survey to get to this point—but these things took barely 3 minutes. Once I finished these three steps, I was able to gain access to the rewards part of the app.

Now, as far as the conversion rate for coins goes, I will say that I was a little bit disappointed. You need quite a few coins to equal $5 worth of gift cards or cash—so, the real question then becomes this… how many receipts does it take to earn you 1,000 coins?

It took about an hour for my receipts to process (I snapped two of them). But once they did, I was quite pleased to find out that each receipt added 10 coins to my account. So with just a few seconds worth of work (snapping the receipts with the app), I made 20 coins.

I also leveled up during this process, which was pretty cool! 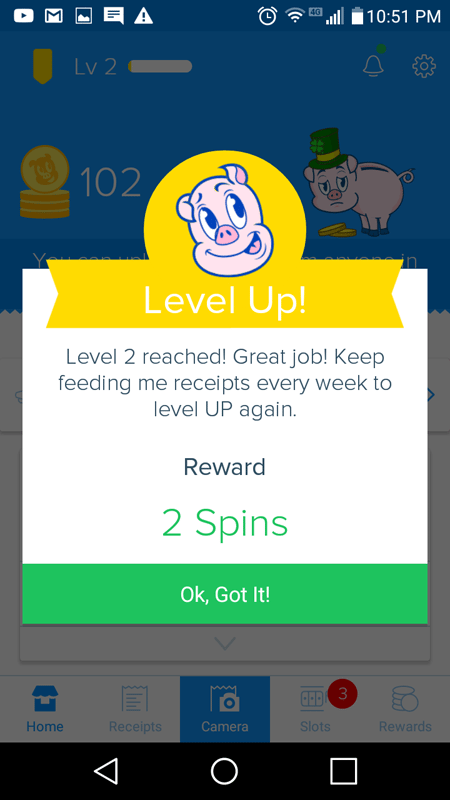 Granted, snapping the receipts into the phone took a little bit of time… but not an unreasonable amount of it. The app worked really well and made taking clear pictures pretty easy.

Personally, I probably end up getting 2 to 3 receipts per day that I could snap in, just from making transactions around my hometown.

I could also play the slots (I won 2 coins doing this while just trying the app out), which would bring my total coins-per-day number to about 32. Multiplying this by 7 brings me to 224 coins per week. Multiplying this by 52 brings the total to 11,648… and that is without getting luckier on slots or getting more than 3 receipts per day (sometimes I do end up with more receipts).

Plus, I would also get bonus coins and spins for leveling up… which makes it even better.

That brings us to at least $80 worth of Amazon Gift Cards per year, but probably closer to $100—which isn’t too shabby!

Can You Make Enough With Receipt Hog To Make It Worth It?

This is a good question—and the answer, for me, is maybe. I could easily see someone making $100 extra per year with this app.

Could I see someone earning more than that if they tried hard enough? Yes… but I would begin to wonder if it was really worth the time for what you get.

In the grand scheme of things, you do have to work for this money. But the work is super-quick and helps you to maximize the return on your purchases. In a sense, it’s almost like getting cash-back rewards when you buy stuff—which is awesome.

It’s not necessarily free money, but the app is fast and easy to use, and it does what it was designed to do quite well. The receipts also process quickly, and I had no problems getting the app to accept them—which was a pleasant surprise to me.

I actually liked this app. It has been one of the best that I’ve reviewed yet, mostly because it’s a sure thing that you have some measure of control over, and because it works so well.

Our Final Thoughts On The Receipt Hog App