Can You Really Make Money With The Decluttr App?

We decided to take a look at it and see if it was everything we heard it was. I love the idea of decluttering, and I’m also a big fan of getting paid for stuff that I don’t use anymore—so naturally, this app appealed to me right from the get-go.

But I was also a bit skeptical, because it almost seemed too easy. Could I really make enough money with Decluttr to justify the act of sending my movies, games, and CDs off to this company? You can try Decluttr for yourself here.

Making Money With The Declutter App

Personally? I've found that the hours I spent trying to sell stuff through apps wasn't worth the time. I could make $5 here and there, but it wasn't a reliable income. If you do want to sell your stuff, here are some other apps to sell your stuff locally.

Still, let's look at what Decluttr has to offer. It might still be useful for some situations.

Getting Started With Decluttr

Decluttr is an app that you can use to sell your unused, unwanted DVDs, games, and/or CDs. The process seems pretty simple, according to the Google Play Store. You simply scan the barcode of the item, and then check the app to see how much cash you could get for it. You then build a basket, send in your items, and get paid.

But we decided to go in-depth to see exactly how profitable the app could really be.

So we downloaded it. And here’s what we found out.

First of all, we learned that over 100,000 people have downloaded it.

At first I was a bit disappointed by the somewhat smaller download audience—but after figuring out exactly what this company did, I realized that, in theory at least, the smaller the download audience, the greater the value you could get for DVDs, games, and CDs…. right?

(I actually have no idea if this is true or not. It just seemed like a logical conclusion to me. But admittedly, the download audience size probably makes no difference where sell-value is concerned… point-being that even though the download numbers aren’t off-the-charts and into the millions, the nature of this app really negates any downside that could result from it.)

The app has 3.8 stars on the Google Play Store, which is pretty good. 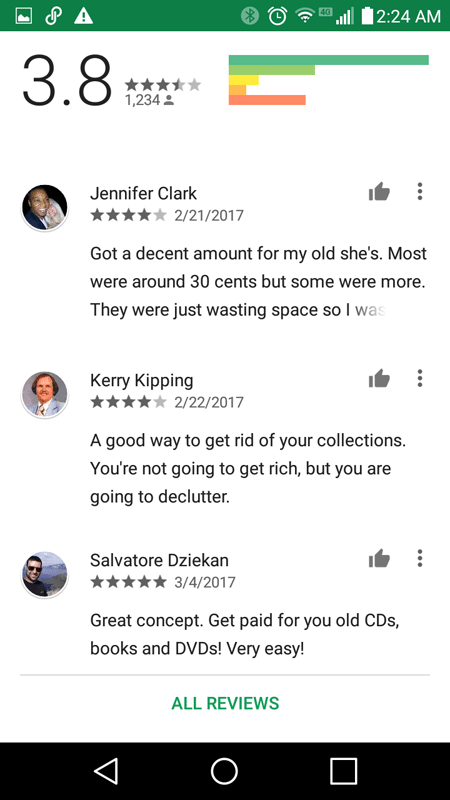 Next we opened up the app to take a look inside.

This was the first screen that we came to. 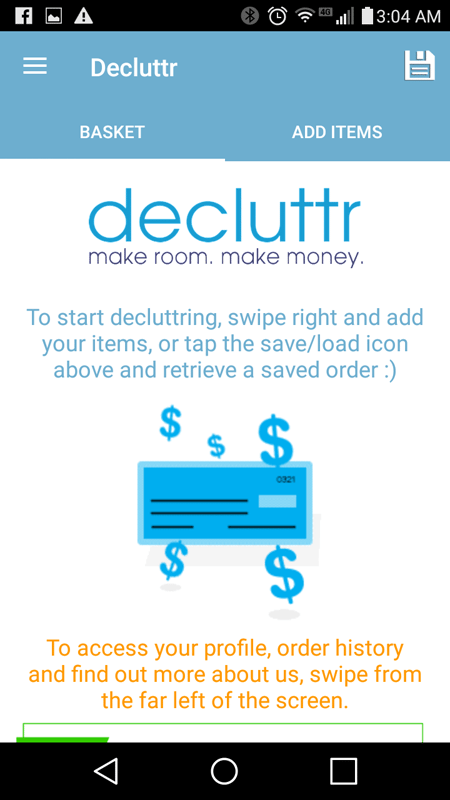 It seemed to be a page with some basic instructions for how to use the app.

Using Decluttr was surprisingly simple. The app was easy to navigate, and contained a surprisingly limited number of functions.

There are two basic parts of the hub within the app—the ‘Basket’ part, and the ‘Add Items’ part. Beyond these, there was also a dropdown menu in the top left corner of the screen. Here, you could access the following options…

Once I got started looking around the menu, I came to a screen with the Decluttr logo that told me to swipe. I did, and was taken to this screen. 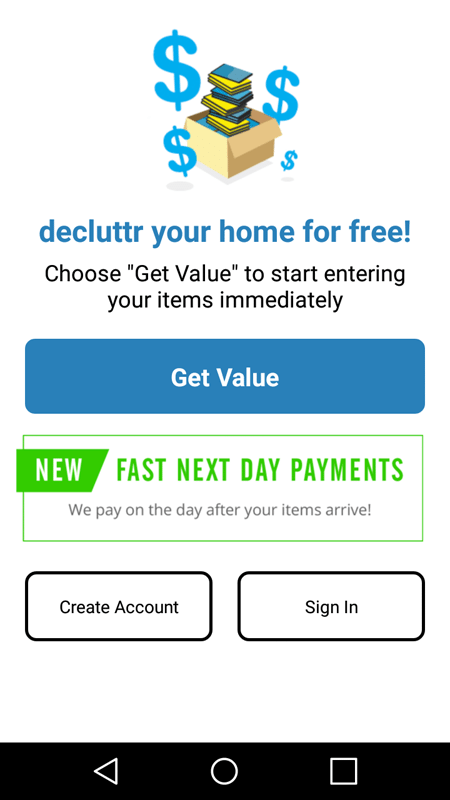 This seemed to be the sign-in/create account screen, though I didn’t actually have to create an account to start entering in items. There was a button that said ‘Get Value,’ which I could apparently use to start entering items immediately.

I decided to try this feature just to see what kind of money I could get from items that I had laying around the house. After all, the idea behind this review was to see if I could really make any money with the app—and this was a step in the right direction.

Clicking on the ‘Get Value’ button brought me right back to the hub where I started—which was fine with me. I swiped left to ‘Add Items,’ and got started.

The screen that came up next had a nice barcode scanner in the middle of it. All I had to do to get a good scan was to hold it over a barcode until it beeped. I decided to try the app out on a DVD, a CD, and a game, just to see what I could get for each. 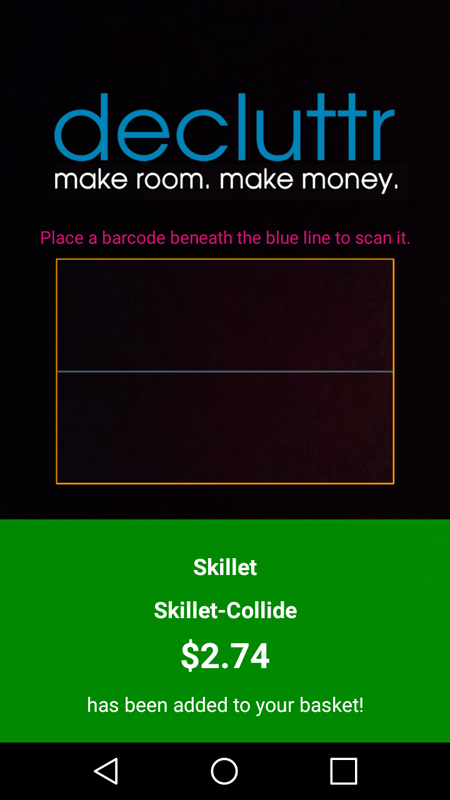 Next, I scanned my copy of American Pie 2, the Unrated Version. I paid $5 for this bad-boy in a sale bin at Wal-Mart about 4 years ago! The app told me that I could get $0.41 for it today. 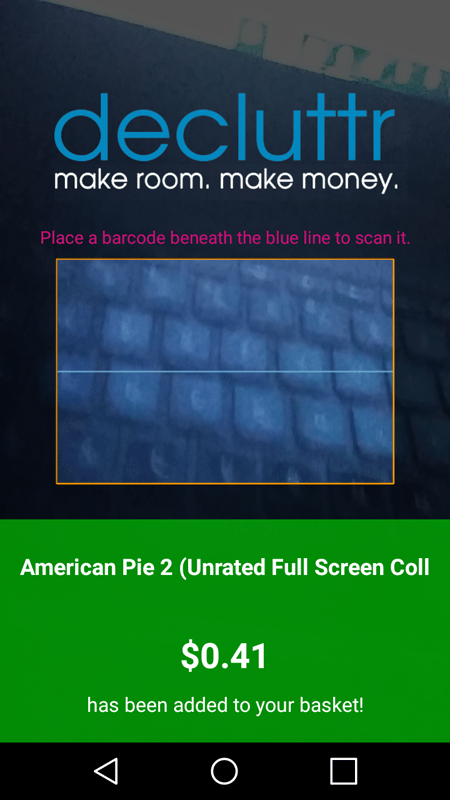 And last, but certainly not least, I scanned my Lords of the Fallen Xbox One video game that I bought second-hand a year ago at GameStop for $18.00.  The app told me that I could sell this one for $0.42! 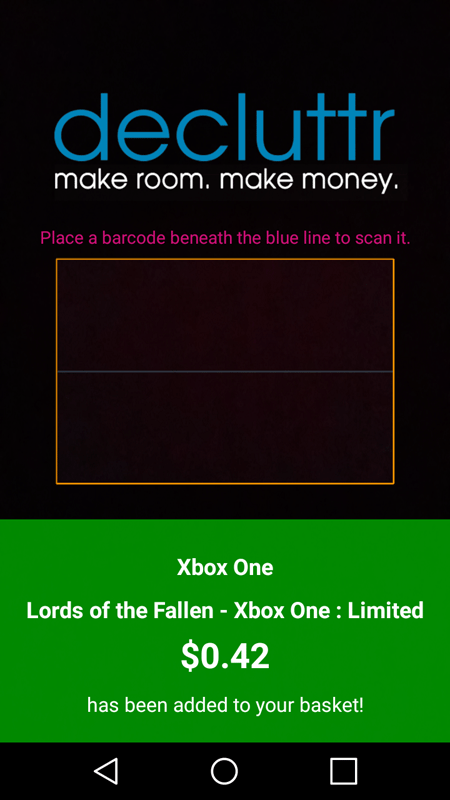 What I Thought About The Prices

At this point, I felt like I had a pretty good idea about what I was going to get out of the average game, CD, and DVD in any given collection. Granted, there are going to be some variables in selling price for different products—but in-general, I just have to say that I found these prices to be rather low.

But that didn’t surprise me. I was a bit surprised that the video game wouldn’t have sold for more, but DVDs honestly aren’t worth that much nowadays unless they are collector’s items, and CDs are pretty much in the same boat.

These prices aren’t going to get you rich. But, the app does make it really easy to send them in, because they will literally give you shipping labels and everything when you process the ‘order’ in your basket. This, by default, makes the app a better choice than sending your used products to the thrift store just to get them out of the way.

It also beats throwing them in the garbage. I mean, extra money is extra money, right?

I have, however, seen people sell DVDs on local Facebook garage-sale pages for $1… and I am pretty sure that this video game could have sold for that as well without a problem at all. Heck—I could probably walk up to the local game store, walk inside, hold it up, and say “who will give me $2 for this video game?”

And I have no doubt that anyone in the store who owned an Xbox One would go for it—just because these games are not cheap to buy—even used.

But, on the other hand, some people don’t have access to these types of opportunities to sell stuff. Also, the time commitment requirements involved in selling large volumes of CDs, games, or DVDs this way just might not be worth it.

For some people, getting a few extra dollars out of these types of belongings just isn’t worth the time it would take—which is the type of situation where this app would shine.

It’s a sure thing that will get you some cash (or change, in most cases) for little to no work on your part.

Does that mean that Decluttr isn’t worth using? Not necessarily.

Our Concluding Thoughts About Decluttr

The app works really well. Selling your used CDs, DVDs, and video games with it is easy, and getting paid for them really isn’t difficult. Get your own account here!

But you aren’t going to get much money.

Is it a waste of time?

That’s really up to you. How much is your time worth? How much are your items worth?

I’ll be honest—you will get paid more anywhere else, such as by selling your stuff locally on LetGo or OfferUp. You could focus on a different app too, like Close5 or Carousell.

Decluttr simply doesn’t pay much. But it will help you to get rid of your stuff, and it will get you paid for it.

But be ready to make just $0.05 on some movies—because the prices can literally be that low.

I really like the idea of Decluttr, and under certain circumstances, I might even use it. But as it is now, with these items that I scanned, I would probably just take my chances with Facebook to see if I could get a hit worth anything.

If I sold all three items for $3 and got someone to come pick them up, I would be money and time ahead—and the video game alone is really worth at least $5 by itself—so even then, I would be getting a bit of a rip-off that still beat the prices offered by Decluttr.

The app has a lot of positive reviews, and it can be awesome for helping you to move massive numbers of DVDs and the like—but it will probably only sit well with you if you literally don’t care about making money.

As a money-making app, Decluttr simply isn’t worth it, in my opinion.

What Should You Do Instead?

With Decluttr, you eventually run out of stuff to sell! It's a very limited way to make money online, but what if you could sell other people's stuff and make money too?

What if you had access to a vast network of people that would pay you a commission each time you sold one of their items?

This network exists! With affiliate marketing, you get paid a commission each time you sell a product online. I've been doing this online for almost 10 years now and it works great because I can choose from hundreds of thousands of online products to sell on my website. Pick your topic and learn how to build your website here!