Can You Really Make Money With The Gift Wallet App? 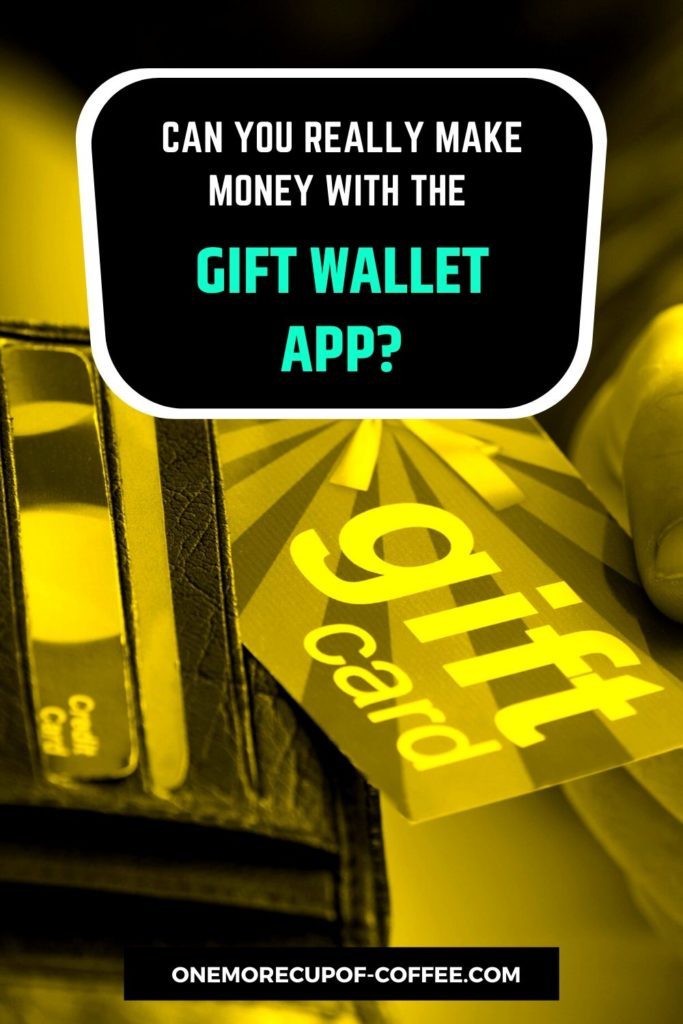 This app promises to give you rewards with ‘just several taps.’ But can you really make money with the Gift Wallet app?

I found this app while looking for some new, cool ways to earn some extra money. And I will admit, right from the beginning, I had my doubts about it. The whole look of the intro page kind of made me question the legitimacy of the app. Even the text seemed a bit odd to me.

But, I hate to judge any app by its appearances, so I downloaded it and decided to give it a try.

The first thing to do with any new app is to look at its profile. As you can see, the Gift Wallet app has had 1 million downloads. It has also been reviewed more than 150,000 times and has accrued a total of 4.6 stars. It was created by a company called WellGain Tech and seems to be at least reasonably popular.

While ratings don't mean everything, 4.6 is pretty good for an offers app. I haven't seen many others hit that rating. The key examples are Cash App, CashKarma, and AppKarma. 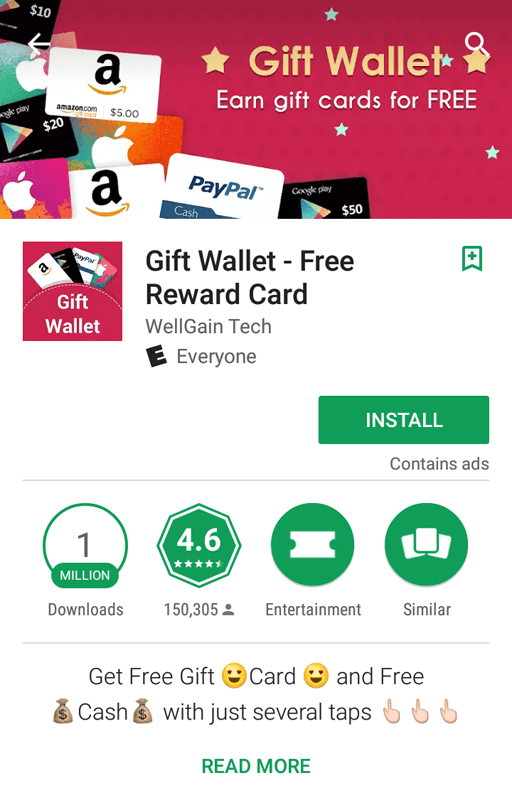 So here is what I found when I downloaded and got started with the app.

Getting Started With The Gift Wallet App

First off, after the app loaded, I was taken to a screen where I was asked to enter my promo code. I also had the option to skip this step, which I did… as I didn’t have a promo code of any kind.

Next, I arrived at the first screen, which I assumed to be the ‘home’ screen. Here is what it looked like. 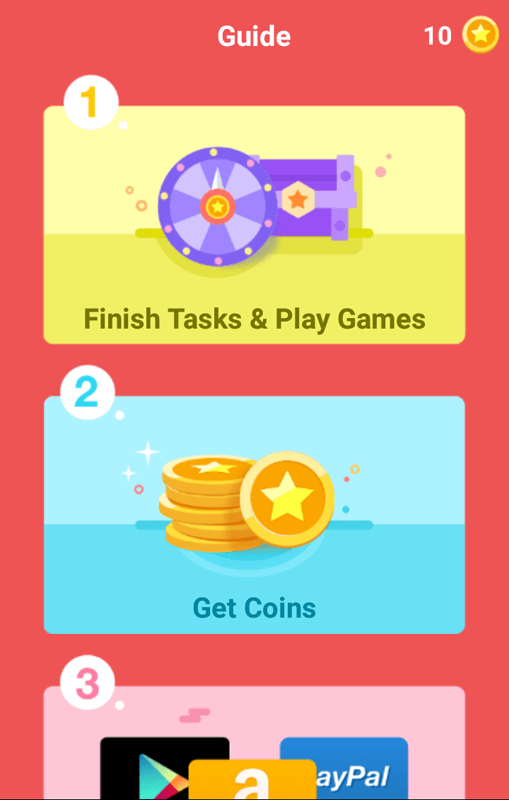 Here, there were several options that I could partake of. I could…

I wasn’t completely sure what the ‘Go’ button was for. So I clicked on it and got started. This led me to what seemed to be the ‘main hub’ of the app. So, the landing screen was apparently just that… a landing screen. This was where everything was located, though. Here is a screenshot of what it looked like. 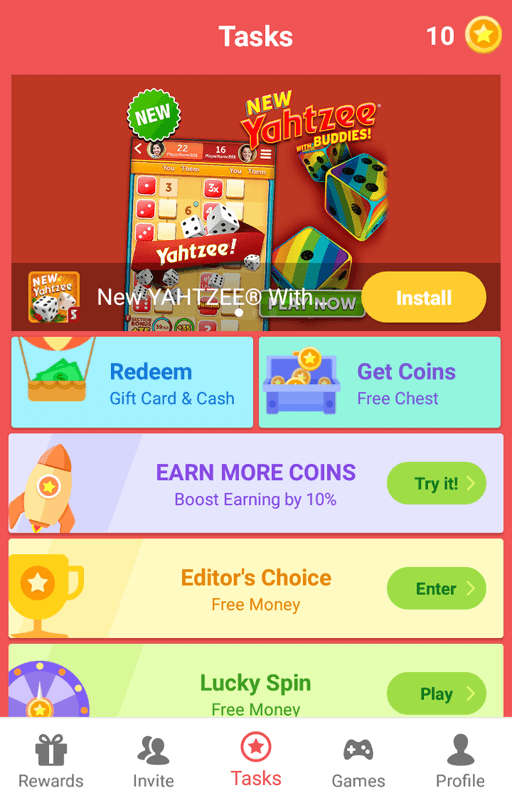 So let’s talk about this for a moment.

What I Thought Of The ‘Main Hub’ Of Gift Wallet

Ok, so right off the bat, I could tell that this app was like an ‘offer wall.’ There were a bunch of different categories of offers, along with the number of ‘offers’ you could find on each of those walls. Along the bottom of the screen, there were tabs for the following buttons…

I decided to try out some of the tasks, just to see if there was anything that paid really well. I found a ‘free spin’ game that gave me a free spin. I won like 2 coins off of it.

I tried to spin it again, and it told me that I would either need to ‘wait’ 5 minutes or pay 1 coin to spin it again. I paid for the coin and spun it… and earned another few coins. It let me do this over and over again.

I could easily earn about 3-4, or even 5-6 coins a minute with this spin-thingy, which would equate to something around 60 coins for 20 minutes.

That would be a pretty monotonous way to earn 60 credits… but I could easily turn this into 150 credits per hour, just with the free-spin.

You could earn more credits by downloading apps and such… but I almost hate to do that because it is just so time-consuming and seems like a waste of phone space. Plus this game paid you instantly with coins… whereas downloading apps is just something that always seems more complicated.

Anyway, I did this for a little while and quickly noticed a couple of things.

First of all, I noticed that my phone crashed a couple of times during this process. And when it did, I had a hard time logging back into the app.

I am not sure if these phone crashes were complete because of the app, but the app certainly seemed to cause them to happen more frequently than they do anyway.

And secondly, I noticed that every time I spun the wheel, an additional ‘pop up’ style ad would pop up, seemingly with the hope that I would click on it when I meant to click on the wheel again.

This seemed a bit sneaky to me. But hey… that is how these apps make their money, so whatever.

I looked at a few of the apps, but for the amount of time I would have to spend on them to earn prizes, the free wheel spin was just better.

I earned some coins… enough to see that my theory about the coins-for-the-time ratio was about right… and then moved on to the Rewards section to see how many coins it would cost me to get rewards. Here is what I found.

How Much Rewards Cost In The Gift Wallet App 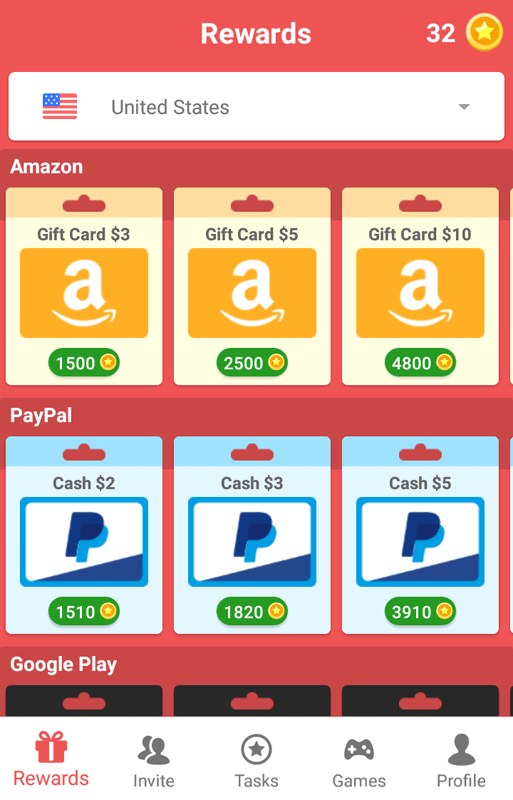 So Amazon cards get you more value… but at my calculations, it would take you approximately 10 hours of free-spinning to earn enough points to get the $3 version!

That is so much time for such a small amount of money. It would certainly not seem worth it to me to go that route.

Granted, there might be some offers that give you more for your money than others. But as a general rule, this seemed to be about the rate that you could expect… which is not very good.

So that pretty much made my choice for me. Here are my feelings about the Gift Wallet App as a result of these findings.

How Were The Online Reviews?

I checked the Google Play Store to see what the app reviews were like, and here is what I ended up learning. First of all, the majority of the reviews were positive. And they were not just positive… most of them were 5 stars.

As for the content of the reviews, here is what I discovered.

I discovered that a lot of the most recent 5-star reviews seemed to be from people wanting other people to use their promo codes.

Most of the latest one star (and there were a lot of these, actually) reviews seemed to be people complaining that they never got their gift cards, or that their gift cards did not work once they got them!

The customer service also seemed pretty sketchy here. There were a lot of bad reviews about this, and the comments left by the company didn’t usually seem to make much sense.

This was kind of all bad-news as far as I was concerned.

My Feelings About The Gift Wallet App: Will I Be Using It Again In The Future?

The short answer to this question is a no… and I am sure that it is pretty obvious why.

This app works alright, though I did experience a few glitches. It also gives you a (somewhat?) legitimate way to earn more money and gives you payout options that are pretty good.

For all intents and purposes, you can do pretty well by earning extra money on this site if you don’t mind earning just a tiny bit for your time.

If you like to try out apps and play games to earn very small amounts of money, then the Gift Wallet App might actually be a good app for you.

Now, with that being said… be warned!!! There are some negative reviews that say the app doesn’t actually payout… so use at your own caution!

If you are invested into the idea of earning some serious side cash as a side-hustle, then I am afraid that you will find yourself sorely disappointed in this one.

You just can’t earn enough money with the Gift Wallet app to justify using it long-term, in my opinion. It seems that your time would literally be better spent going door-to-door, offering to mow lawns with your lawnmower.

Yes, this app does offer a lot of flexibility, and you could pretty much use it at any time, anywhere. But that is where the advantages begin to slow down.

This app is a little bit glitchy, it doesn’t offer a lot of really awesome money-making opportunities, and it is time-consuming because of the ads and popups that you experience while using it.

But it is just an offer-wall app. And to be honest, it is not much different from any other app of this type that I have ever used.

If you want to make some good money, and want to do so on a flexible app that will let you earn a significant amount on your own time, then you can try it… but I am afraid that you will likely end up asking yourself why you invested so much time into it. It just doesn’t seem to be worth it to me.

Our Final Thoughts About The Gift Wallet App