Can You Really Make Money With The Quest Mindshare Survey Website? 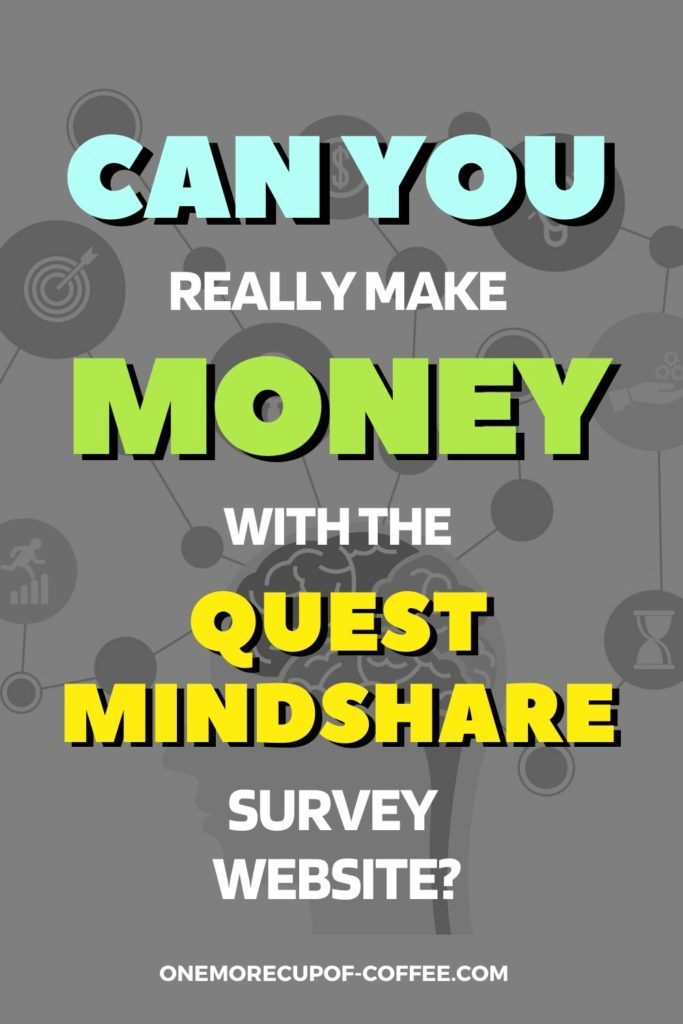 This site claims to be ‘the fastest growing, undeniably exciting and financially rewarding panel anywhere!’ But can you really make money with the Quest Mindshare survey website?

The first thing to think about is the site itself.

I was actually able to learn quite a bit about Quest Mindshare (found at Questmindshare.com) just from looking at the landing page. 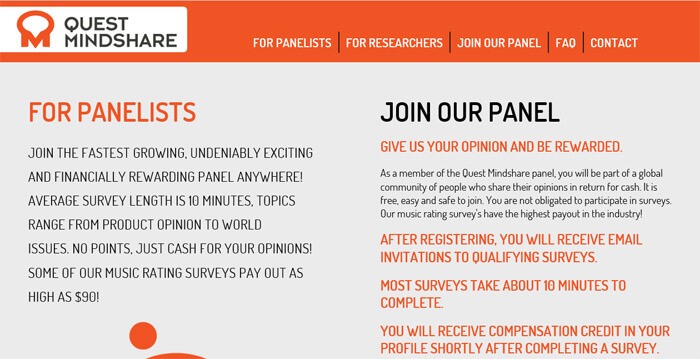 They said that the average survey length was 10 minutes, that topics range from product opinions to world issues, that they do not use points… just cash, and that some of their surveys pay out as high as $90 (some being the keyword, I am sure!).

It might seem like a small point, but I was glad that they didn't use points… because they get confusing and, in my opinion, are a bit of a gimmick… so yeah, that's a good thing.

I also found out that, like many survey websites, this one notifies you of surveys via email, so you don’t have to keep checking back to see if there is work… which saves time and is, admittedly, a very nice upside.

I was pretty interested in this one. I will admit that the striking orange and white coloring of the landing page, mixed with a really simplistic, yet modern layout, appealed to me.

It was actually very minimalist, which is a look that I am a fan of. But I tend to try never to judge a book by its cover, good or bad—which is why I was determined to get into this site for myself to see what was up.

Scrolling down a little bit, I also realized that there was a really cool section for researchers as well. I don’t generally pay as much attention to this element of survey websites, because I am looking to make money, not purchase services. But this was so well laid out that I couldn’t help but to notice it. 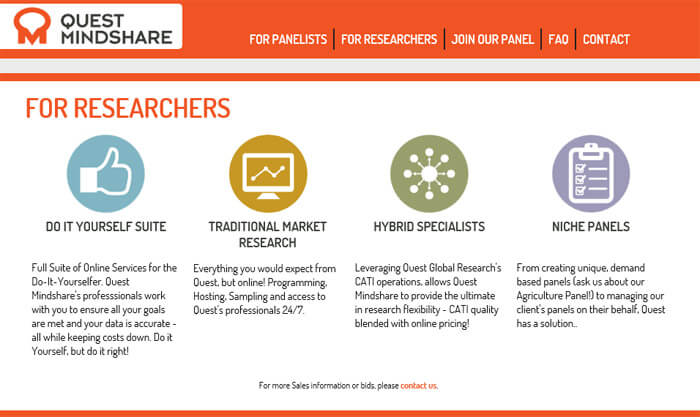 So kudos to Quest Mindshare for this part as well!

Scrolling down even a bit further, I came across a brief, yet very well done FAQ section as well. I must also comment on the content of this website.

I feel like it was written very well. It’s not just well done senseless dribble, either. It’s almost a little snarky—and I love it.

I am sometimes surprised by how bad or dry the content on some of these survey sites can be. So I am always happy to a site that is well-put-together.

We know. We utilize the latest and greatest in software to weed out the bad apples.”

This actually made me laugh! So, that’s a good thing… right?

At any rate, at this point, I felt that I had come to a point where it was time to join the panel… so I clicked on the appropriate tab along the top of the screen and got started.

The beginning registration process was actually quite simple. All I needed to do was supply an email address, create a password, list my gender, give them my year of birth, and fill in my zip code.

Once this was done, the site said that a verification email would be sent to my email address. I checked—and sure enough, it had been. So I activated it, and then returned to the Quest Mindshare site.

At this point, I had been kicked back to a sign-in page… so I went ahead and signed in.

I decided to click on this first, just to see what was going on.

But when I did, I was actually taken to a ‘household’ survey where I was asked to fill in information about my life that would help to qualify me for future surveys.

By the time I finally got done with the survey, it had taken several minutes… and after, I was taken to what seemed to be the ‘main hub’ of my Quest Mindshare account. 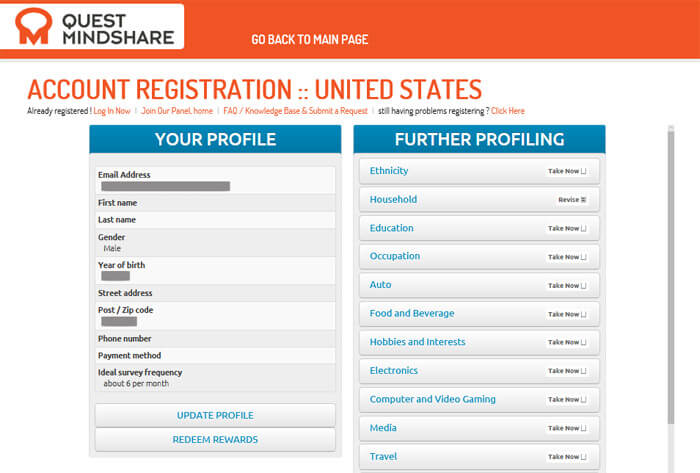 I felt a little bit torn about all of this. On one hand, this seemed like a lot of work that I wouldn’t likely get paid for. But on the other hand, I felt like doing this work might guarantee me more surveys in the long run, which would eventually end up causing the work to pay for itself.

As of yet, I had still not gotten any survey invites… but then again, I had only been a member of the site for a couple of hours, so that is a significant detail, and doesn’t necessarily mean that the site isn’t going to be sending me many surveys.

It is just hard to gauge how well a survey site like this is going to do until you have spent a bit of time on it.

With that being said, I did feel like I had learned enough to give my official opinion. Here is what I came up with.

My Personal Feelings About The Quest Mindshare Survey Website

First of all, I will say that I liked pretty much everything about this site. I felt like it was technically efficient, I liked the colors, and I liked how it was put together.

The survey that I took (which was just an introductory survey) went without a hitch… so if that is any indication of what I could expect from other surveys, then this site certainly has a lot to offer.

Now, another thing I will say about this site is that I am not sure how much the typical survey tends to pay… so that is something that I am going to be watching out for.

If each survey pays out a dollar or two, then that may not add up to much. But if the surveys pay more, then I could really see this site being a cool method for earning a bit of extra cash.

They mentioned that some of their surveys are valued at up to $90, but I am pretty sure that this is the exception, rather than the rule.

So here is my plan with Quest Mindshare. I plan to stay registered and see what kinds of survey opportunities come down the pike. If I end up getting one or two that seem worthwhile, then I might take some of the other introductory/placement surveys to see if I can increase the number of surveys that I get per month.

I mean, I am already a member on MANY different survey sites… (such as Panel, Surveys on the Go and Testspin) and I get A LOT of email notifications for surveys every day.

But… the vast majority of them just do not pay what I would need to make in order for them to be worth my time. And that, to me, is the key. Time is our most valuable resource.

If we really want to maximize our financial growth and start getting a bigger, better cash-flow coming in, then we need to make better choices about how we spend our time.

And unfortunately, a lot of survey sites just do not cut it in this department.

Personally, I feel like this is a good survey site to try out if you love to take surveys and are interested in making some good extra money.

But if you are looking for a side hustle—I am not sure that this site is going to do it for you. It is well-put-together, and as a survey site, it is quite nice. But I need a real side hustle that I can maximize and re-invest in—and this just doesn’t qualify as that for me.

Our Final Thoughts About The Quest Mindshare Survey Website

Should you register and join the site to make some extra money?