Can You Really Make Money Flipping Free Stuff On Craigslist?

I have blogged about Craigslist and flipping in different posts on this website—but this specific flip-hustle is a little bit more non-specific. And yet, there are actually a lot of entrepreneurs talking about it online, so I figured it was absolutely worth a look. Can you really make money flipping free stuff on Craigslist?

The first thing to talk about is the idea of free stuff on Craigslist. If you visit Craigslist.com, and scroll down to the ‘For Sale’ section, you will find a section called ‘Free.’ 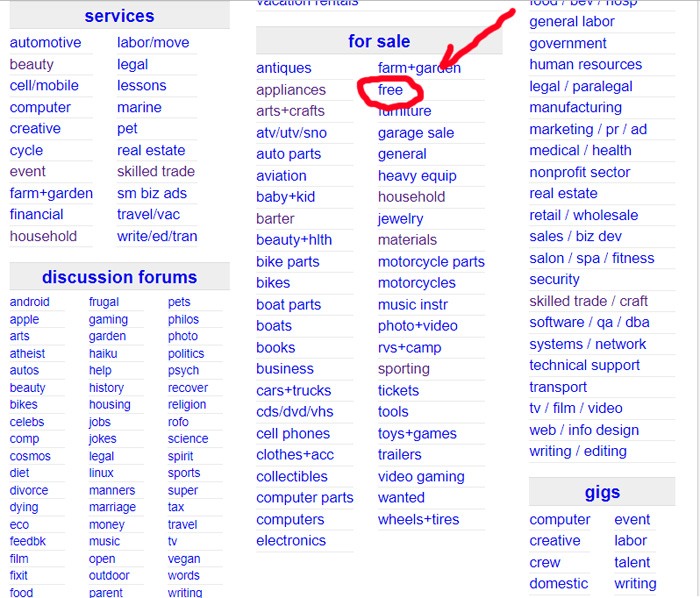 This section is literally made for people who are giving a way ‘free stuff’ on Craigslist. I went to my local listing and started browsing through it, and actually found some pretty awesome stuff.

Where I live, firewood literally sells for $20-$40 per pickup load. And yet, there were more than a couple of different people offering free firewood from trees that they had cut down in their yard. Some of it was already cut! It just needed to be hauled away!

All of this stuff is literally being given away for free—probably by people who just want to get rid of stuff and don’t want to see it wasted.

Some people just don’t need the extra money and would rather have someone haul their stuff away if they buy something new. And while this might seem ‘cool,’ it is actually way more than cool… it is a paradise for the side-hustler who wants to earn some sweet side cash.

Even if you don't know anything about flipping, it is an easy gig to get into. You are just picking up free stuff, fixing it up, and reselling it for a profit. That's it.

What's the catch? There really isn't one. You need a few things to get started, and you will need to invest your time into it, plus a little bit of money if you need to buy materials to repair it.

But besides this, there really isn't much that you are required to have in order to make this side-gig work for you.

So let's talk about what it does require.

What Are The Requirements For This Side Gig?

You obviously won’t need any cash to purchase anything—because, as stated before, the entire point of this is that everything in this section is free. But it would probably do you well to have a truck or some kind of vehicle to transport stuff in.

If you don’t, then an alternative could be to pay someone who does have a truck a little bit of cash to help you pick it up and haul it away.

You will also need some tools and a little bit of knowledge about how to fix things up, as some of the furniture and stuff that you buy might need to be repaired or cleaned up a bit.

You can also sometimes alter the stuff you get to ‘fancy it up’ if you want, and this can sometimes be even more lucrative. For example, if you get a free table and fix it up to look nice, awesome… sell it for $30 bucks on Facebook Marketplace.

But what if you are an awesome artist and can paint a superhero on it? That could make it even more valuable, and might get someone to pay even more for it.

So, you have the freedom to be original with some of this stuff—but the business model remains the same. You just pick up free stuff on Craigslist, fix it up, and resell it.

The selling could take place either on Craigslist or on some other marketplace like Facebook, or on one of the various apps that you can use to buy and sell stuff on. Some ideas of apps to check out include Carousell, OfferUp, Vinted, VarageSale, LetGo, and Shpock, among others.

Another requirement is that you need a place to store stuff until you sell it. This can get a bit crowded—but it is well worth it for the money you will make. A garage makes a perfect storage space, though you can also rent a storage unit if you just don’t have that kind of room.

Of course, people in some areas will have an advantage using this method, because areas with more people (and more wealthy people) are going to offer greater yields than areas where fewer people live.

So larger cities are going to offer a lot more opportunities than smaller ones. But still—this is definitely a side hustle you can make use of even if you don’t live in a huge city.

You can also achieve a similar effect by getting onto online marketplaces and low-balling the sellers. If you can pick up a TV for $5 and sell it for $25, that's quite a bit of profit!

How Much Can You Make Per Month Flipping Free Stuff On Craigslist?

This all depends on how much time you are willing to put into it… but from what I can see, I could easily make an extra $50-$100 bucks a week even if I just flipped one or two things. That is basically one afternoon of work.

If you did this several times a week, you could earn a lot more than that. I have actually heard of people earning 30 to 50 thousand dollars PER YEAR doing this full time, though of course, as with any side hustle, you are only going to get out of it what you put into it.

Of course, you will also probably get better at it with patience and practice. At first, you might struggle to figure out exactly how to do it right in your area… but a little bit of practice can absolutely change that. If you do give it a try, you will likely be an expert before you know it!

Effort and hustle are all it takes to make this kind of thing work.

One thing that is really important to keep in mind is that good stuff in the ‘free’ section gets picked up really fast. So you need to constantly check it and try to get the good deals first. If you only check it now and then, you probably aren’t going to find anything worthwhile.

It really pays to check Craigslist every hour if you are planning on making use of this side-hustle idea.

Is This A Realistic Way To Turn A Profit?

Absolutely. Of course, it is not going to work the same for everyone. Some people may not be able to make it work for one reason or another. Poor health, lack of a vehicle, not having good CL coverage in your area, etc.

But… for people in the right circumstances, this is actually a great way to earn some money.

Some people are afraid of this kind of thing because they are afraid to put themselves out there. But you should never let that stop you, either! Don't be scared… be determined!

Are There Non-Monetary Costs?

You will need to pay for gas. You will also need to give up some of your time to get the stuff, fix it, and then re-list it online. Meeting with potential buyers can also soak up some time.

But at the end of the day, you will probably find that most people will be pretty easy to deal with, and that you won’t waste too much time. Just make sure that the markup on your items is good enough to pay you for the time that you will be spending getting them ready and picking them up.

Storage space is also an issue. If you don’t want your storage space taken up with furniture and other things, then this may not be the side hustle for you.

My Personal Feelings About Flipping Free Stuff On Craigslist

Personally, I am a pretty big fan of this side-hustle. I have sold quite a few things on Craigslist, and have found it to be a very lucrative way to earn some extra money.

With that being said, I do not live in a super big city. But… my city is listed in Craigslist, and I absolutely have some awesome opportunities to make extra cash that way.

So for me, this side-hustle idea gets two thumbs up.

If you want to give it a try, all you really have to do is browse your local craigslist ‘Free’ listings. Of course, you will have to check it regularly, because as I said before, the good stuff goes fast! But as long as you put some serious time, attention, and effort into it, you should have no problem making some sweet extra cash.

You may not get super-rich doing this… and to a point, it will always require your attention… so the opportunity does not really exist to make it completely passive. But, it is still an awesome way to make some cash without selling your time delivering pizzas for a few bucks an hour—and that, in itself, has a lot of value.

Should you get on Craigslist and give this one a try?