Can You Really Make Money Selling Things On Craigslist?

Note: This article was written by a guest writer here on One More Cup!

Lately, it seems like a lot of people are talking about CL because of the recent ‘crackdown’ on the personals section (Yes, as it turns out, CL dating is no longer a thing).

But ever since the site was first launched, it has been a hub for commerce between private buyers and sellers—and today, we are going to talk about that. Can you really make money selling things on Craigslist?

I have recently had an experience that taught me ‘yes,’ though I will admit that I had to learn about it first. Here’s the story.

Why I Decided To Make Money Selling Things On Craigslist

I am actually not a ‘career Craigslist seller.’ There are people out there who sell stuff on Craigslist full-time, often picking it up at garage sales or at the flea market before selling it on CL for a profit. Some people have also made some serious money getting stuff cheap (or for free!) on CL and flipping it.

But my reasons for using Craigslist were a little bit different. I recently moved to a new city, and ended up moving out of a rather large 3-bedroom house with a 1-car garage into a rather small 2-bedroom apartment with 2 small parking spaces. Needless to say, I needed to downsize.

So I rented a storage unit, moved my stuff, and put everything that didn’t end up going in my apartment into storage. The next step? Well, I wanted to get rid of the storage unit!

I am kind of a minimalist as well, so the idea of having a bunch of random stuff around that I wasn’t going to be using really didn’t appeal to me. I also didn't want to be constantly spending money on a storage unit.

What Did I Have To Sell?

I decided pretty quickly that I was going to try to move everything through Craigslist—but I did not anticipate how much work it would be. But first, let’s talk about what all I had to sell. I had…

So yeah. I had all of this stuff, but wanted to sell it and make a bit of extra cash at the same time. I looked into pawning some of it, but truth be told, the amount of money you get for selling things to pawn shops tends to be pretty low.

I did actually end up selling a couple of things to a local pawn shop, because they offered me pretty good money for a few of my more expensive tools… But aside from that, it was almost a waste of time to even bother with pawn shops.

So I firmly decided that Craigslist was the way to go for everything else.

Listing My Stuff On Craigslist

This was actually the hardest part. Using my smartphone, I started moving my stuff into my apartment and taking pictures of it. I wanted to get it all out of the storage unit as fast as possible, so as I listed it, I just kept it in a corner of my living room until it sold.

This also allowed me to get nicer pictures of the stuff, as I had pretty nice white walls and light carpet in my apartment.

So this is basically what I did. I took pictures of everything using my smartphone, and then wrote out the listings on my laptop (posting listings from your phone is kind of a hassle), and waited.

This was my first listing, and it sold within the first few hours. I learned a lot from this post. 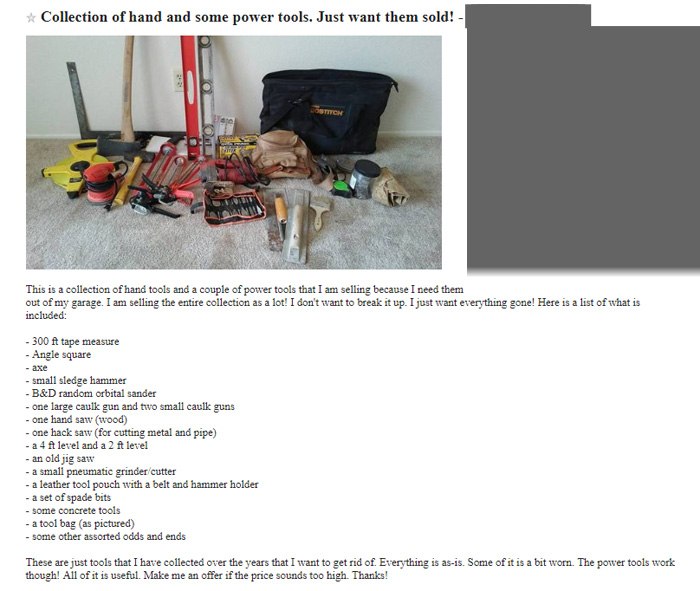 You will probably notice how “chill” I sound about posting this stuff. I was trying hard to avoid sounding like a swindler, and to be honest, I was a bit timid about asking too much. I priced the lot super low, and it sold so fast! It sold literally within the first few hours.

I think I took a good picture in this listing, and I think I did a pretty good job on the description. But I also think I just priced it too low. It is blocked out on the photo, but I priced this lot of tools at just $25.

I could probably have made $40 easy on this lot, or maybe even more. I could certainly have sold it for $35 and still sold it fast. But I did learn from this. I learned that it might be better to price things a bit on the high side, and then slowly bring them down until they sell.

I quickly began to realize how difficult people on CL could be. When I posted listings, I did not include my phone number. I simply used to Craigslist email relay system, and I was pretty happy with that. But I started to see a trend develop that really drove me crazy.

Here is an example the type of customer that started to cause me problems.

Customer: I want this, but I am working right now. I get off work at 4. I can go to the bank and then meet you at 5. My phone number is blah-blah-blah. Text me the address. Can you hold it for me?

At first, being the naïve, nice guy that I was, I said yes. I didn’t text my address right away, but I did text to exchange numbers, and generally believed he was going to follow through.

Well, over the next few hours, I got like 5 other emails… some of them ready right now to give me money and pick the stuff up. But I had already told this guy I would hold it.

Then, when 5 pm came along, after he had not returned my follow-up text, and I never heard from him again, I realized that I had been duped. I’m not sure what happened, but he never responded or showed up to pick up the stuff.

And that was when I started to alter my postings to account for this. Take a look at this posting I did a day or two later. 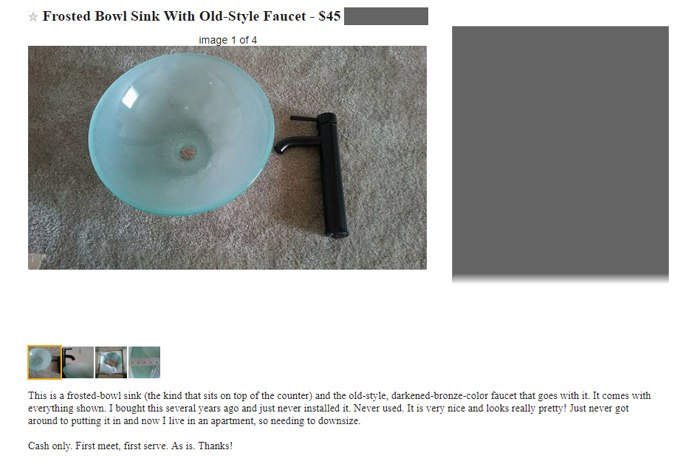 As you can see, I was starting to wise-up a little bit. I included this little message at the end.

Cash only. First meet, first serve. As is. Thanks!

This, I felt, let people know that I was going to sell the item, for cash only (I suggest not taking checks. How do you know they aren’t bad?), to the first person who could meet me. Also, I started including ‘As Is,’ just to cover myself in case someone tried to come back and say something didn’t work, etc.

So yeah. I felt like this really helped me to deal with customers better. I still got asked to hold items, but I now just said ‘no holds, I give it to the first person who can pick it up.’ And this worked a lot better.

My Most Important Tips For Selling Things On Craigslist

Here is a summary of the main tips that I would give someone who wants to sell stuff on Craigslist.

So yeah. These are my main tips for making money on Craigslist. I hope this helps! You can definitely make good money on CL, but it does take work.

The most frustrating part was dealing with the people involved. I actually really ended up making some sweet cash by the time I sold all of my stuff though, so it was well worth the time and effort for me!

Our Final Opinion About Craigslist

Should you try to make some extra money by selling stuff on CL?