Can You Really Make Money Making And Selling Beef Jerky? 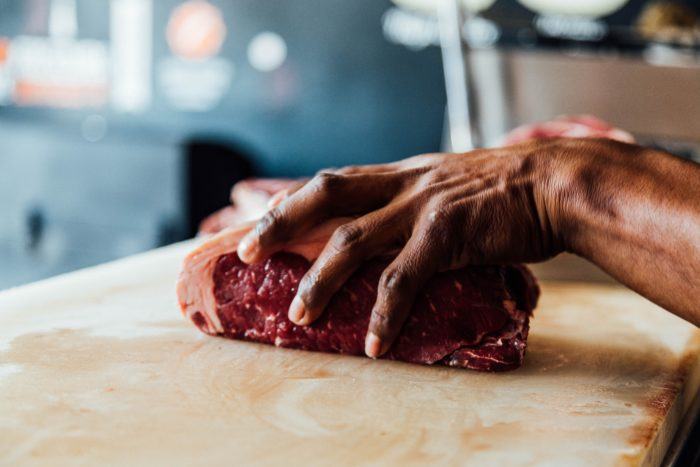 First, let me explain why I’m even thinking about this as a side hustle.

Not long ago, my girlfriend went on a road trip with one of her girlfriends. And when they got back, they brought in a leftover bag of beef jerky that they bought at a convenience store. It was just a little bag… and yet, it cost $8, or close to it. I thought to myself… “I wish jerky wasn’t so expensive. I really like it.”

Then, I thought to myself… “Maybe I should try to make my own?”

Then, the side-hustle wheels in my head started turning even more.

What if I made jerky and sold it to my friends?

Beef jerky is actually a pretty healthy snack. It’s full of protein, but it doesn’t have a bunch of the processed sugar or fat that a lot of other snacks have. The only problem is that it is expensive to buy.

You could certainly make it cheaper if you made it yourself, right?

This is what I wanted to find out. I have only made beef jerky a couple of times… so I know a bit about the process, but am still no expert.

First, let’s talk about how it is made.

How Do You Make Beef Jerky?

The first part of making quality beef jerky is to create a marinade. I checked out some videos on Youtube about this, and found this one.

This is especially true of chicken and other poultry jerky! Beef is obviously a bit safer when it comes to bacteria… but you still need to make sure that you’re doing it right!

You are supposed to cut the steak into thin strips, while also cutting off excess fat. Then, you let the meat marinade and soak. The marinating should be done while the meat is being refrigerated, and takes 6 hours or so… depending on the recipe.

After this step, you strain the marinade off of the meat and arrange it all on a dehydrator rack. Then, you set the temperature appropriately, and let it dry.

Once it is done, you just let it dry off and then package it! I’ve seen a lot of Youtube chefs talk about storing your beef jerky in a jar… but I also know that you can store it in plastic sealed bags as well.

When you make beef jerky like this, the shelf life is several weeks… but not months like the beef jerky you buy at the store. This is because you are not packing in a bunch of preservatives. But… that also makes homemade beef jerky a bit healthier and more ‘organic,’ so that is actually kind of a selling point!

Let’s talk about that next!

How Much Money Could You Earn Selling Beef Jerky?

So, the first thing we have to do is figure out how much it costs to make beef jerky, versus how much you can sell it for.

So I started doing some research online. Here is what I figured out.

I found an excellent video on Youtube where a guy compared the price of homemade beef jerky to the store-bought kind by literally making his own and comparing the prices. You can find the Youtube video here.

Anyway, here is a breakdown of what he paid.

He bought a pre-packaged pack of beef jerky… 3 ounces, for $4.

Then, he bought a round London Boil steak for about $13. It was roughly 2 pounds of meat. Of course, some of that weight is water… so you cannot really compare the prices without going through some extra steps!

He also had to buy some Teriyaki sauce for $1.84, to flavor the jerky.

After his experiment, he found that you actually save about 14% when you make your own beef jerky as opposed to buying it from the store.

You can get a bag of it for about $4 when you buy it from the store. But when you make it, the same amount costs about $3.43 to make.

Right from the beginning, this doesn’t really seem like a super-great deal. It almost seems like the profit margin is so low that making it to sell doesn’t seem like it would be very profitable.

Of course, you could mark it up for being homemade… but the entire point of this was to find a cheaper way to make beef jerky so that you could sell it and earn a profit.

I was still curious about the quantity of meat. What if you bought meat in larger quantities?

This guy bought a 2 pound steak for $13. That’s roughly $5.50 a pound. We also know that 2 pounds of meat creates about 13 ounces of jerky. In this example, store bought jerky was priced at roughly $1.33 per ounce… while the homemade jerky cost $1.14 per ounce.

I did some looking around online, and learned that retail grocery stores are not likely to sell jerky-suitable beef much cheaper than this (obviously you can find it on sale at times… but for regular pricing, this seems to be about as cheap as it gets at local stores).

You might be able to find cheaper meat at local butcher shops, or at other specialty shops. So, that is one possibility.

But unfortunately, it looks as though the markup potential on beef jerky for the layman is not very good.

If you want to sell beef jerky to your friends, family members, and co-workers as a side hustle, you are likely going to need to focus on creating quality beef jerky that tastes better than what you find in stores.

The ‘freshness’ of homemade jerky is also a selling point. The only problem here is that you would need to sell it at (or near) the price of jerky at the retail store to even hope to make a profit.

The better the deal you could get on beef, the better your margins would be… but still, that is not something you could always rely on to make up the difference.

Plus, you have other ingredients to consider. Salt, honey, brown sugar, sauces… all of these are likely candidates that you will need to buy at some point, and they will cost extra.

You will also need a dehydrator if you don’t want to make it in the oven.

My Personal Feelings About Making Beef Jerky As A Side Hustle

I love the idea of this side hustle, but I actually think you would have to market your jerky as a ‘specialty product’ if you wanted to sell it. As it turns out, jerky from the store is pretty cheap.

You may be able to make jerky cheaper by buying larger amounts of beef at a time… but even so, you would be hard-pressed to sell your jerky for less than a retail store charges while still making any kind of money.

What you can do, however, is create different flavors of beef jerky and try to make them taste as good as possible. You can use ‘homemade, delicious jerky’ as your selling point instead of ‘cheap’ jerky… which, honestly, is probably better anyway.

That same sales approach applies to other types of homemade products too, like sugar free cookies and jam.

The main thing to remember about this side hustle is that it would cost a bit of money and require a bit of practice to get started. You probably won’t be able to sell your first batch for very much. But the good news is that, once you perfect a recipe, there will likely be people out there who will pay you for it.

Mouth-watering flavor and freshness are two selling points for jerky that are hard to beat!

There are also some health-code considerations with this side hustle. If you are going to start an actual business doing this, you will likely need to look into the health codes and find out how to do it legitimately.

But yeah… this is a pretty cool side hustle, and if you love cooking, you might want to check it out!

Should you buy some beef and start drying your own delicious beef jerky to make some extra money?