Can You Really Make Money With The Toluna App? 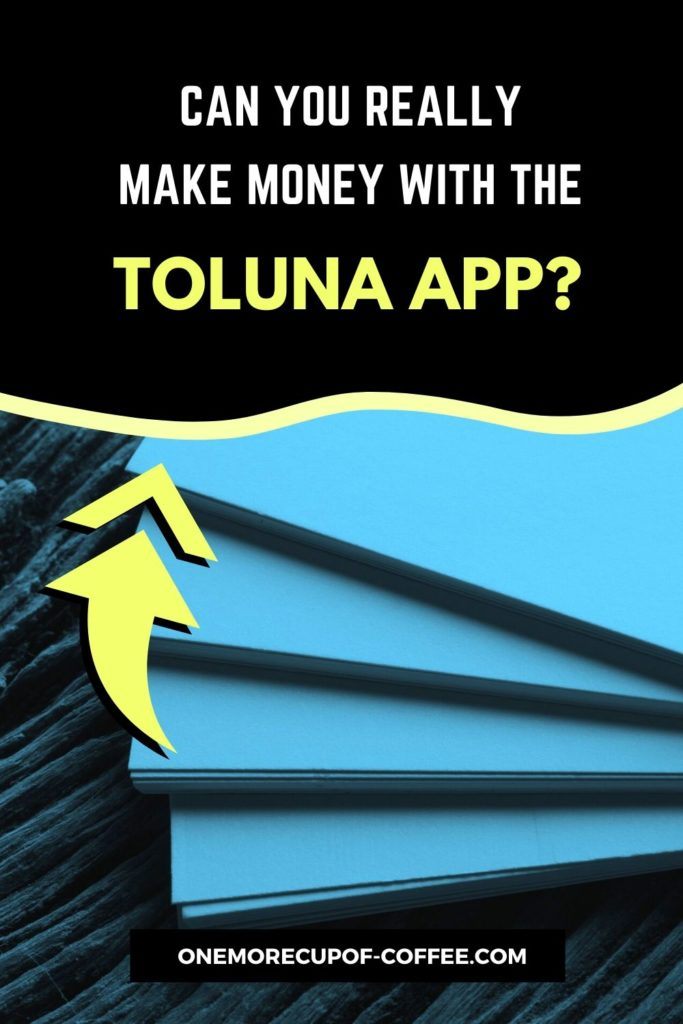 I found this app while researching new and better survey apps online. But can you really make money with the Toluna app?

This was my question, so I was determined to get to the bottom of it. I was also determined to record my experiences so that you (our readers) could know what to expect if you are thinking about trying it out.

Making Money With The Toluna App

First things first, the app had pretty good stats. I downloaded it on Google Play, and saw that it had been downloaded over 1 million times, and had a Google Play rating of 3.2 stars. 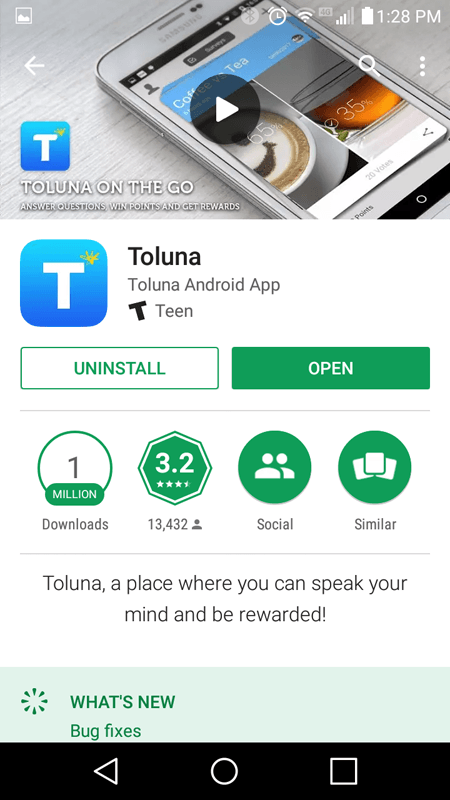 Now, I am usually not super pumped about apps with less than 3.5 stars, because the odds that I will like them seem to decrease below that number.

But… this app has so many downloads, that I am honestly not super worried about that. Besides… survey apps tend to be a bit finicky, and I could easily see how some people could give negative ratings just for this fact, even if the app itself is good.

So I opened up the app and decided to give it a try. Here is what I discovered.

Opening Up The Toluna App For The First Time

The sign-in page of the app was actually quite nice. 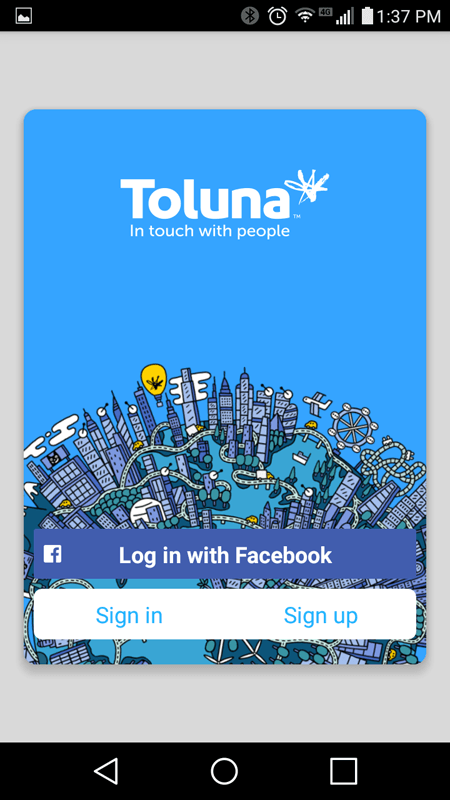 I chose to use Facebook to sign in, which proved to be quite easy. After that, I was taken to an introductory page that gave me some information about the app. Here is what it looked like. 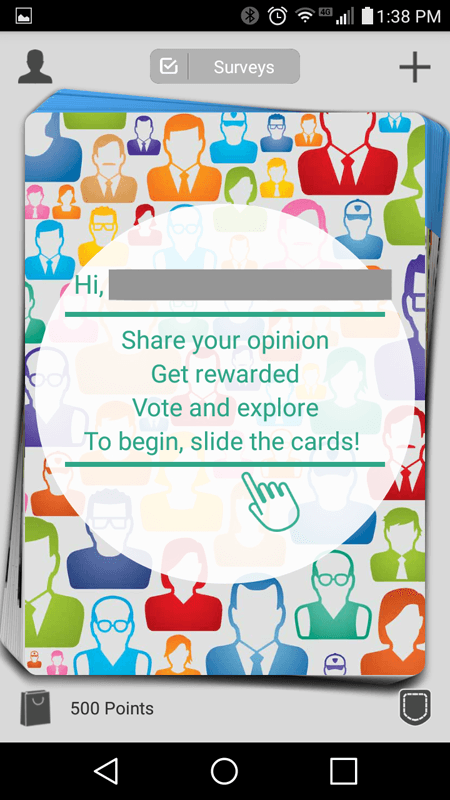 This was quite interesting. It seems that you engage with the app by ‘sliding cards,’ which is something that I have never seen before. I liked the idea of it though, so I got through the tutorial and got ready to give it a try.

But as I got started, I quickly realized that this was unlike any other survey app that I had ever taken. First, I got a question about gender equality. I found this to be unusual, but I answered it and slid my card to get to the next one. This is what the next one said… 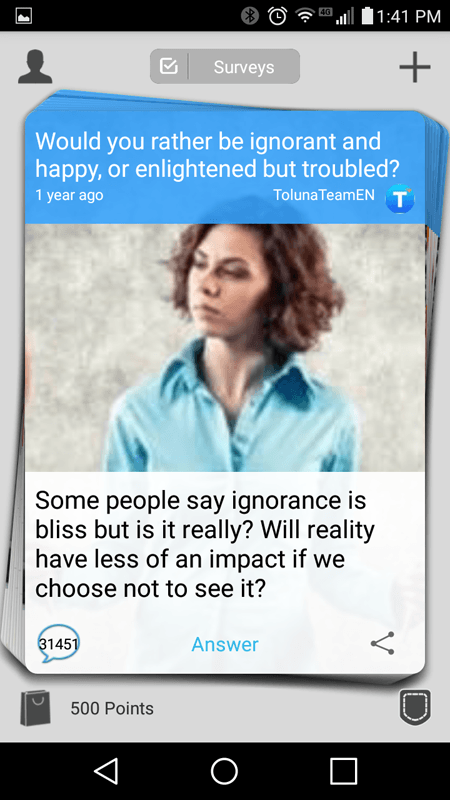 I answered it and moved on. This was the question I saw next. 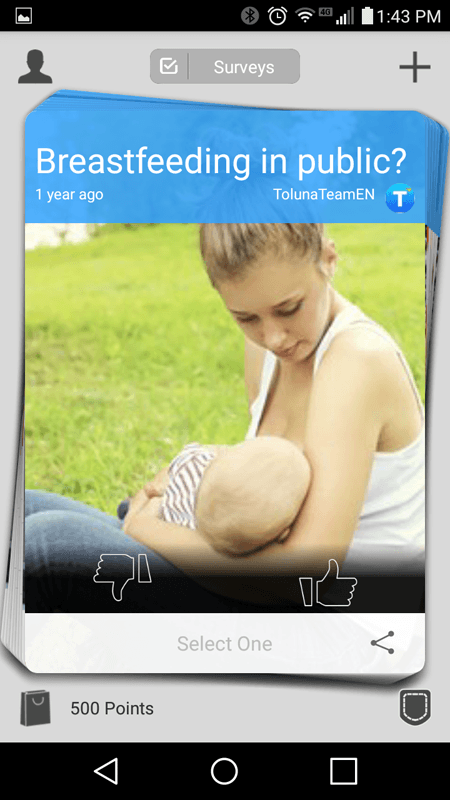 At this point, I was beginning to wonder how anyone could expect to get paid for giving their opinions on issues like these. I have literally never seen this in a survey app before, and in a sense, I like it. I tend to be pretty outspoken about my social and political ideas, and so this fit right into that vein for me.

But, on the other hand, I downloaded the app to earn some extra cash, and I was unsure about how these types of questions were making anyone any money.

But, I decided to keep at it for a while, so I did. Eventually, I came to a card that told me that I could ‘register and take a short survey’ to start earning points.

So I did. This little survey didn’t take much time at all, and before I knew it, there were cards popping up in my feed that had point values recorded in the top-right corner.

Now we were getting somewhere!

I tried to answer a question or two that had a 15 point value assigned to them, but they never worked. They always had some kind of error message pop up… which certainly wasn’t a good deal as far as I was concerned!

Next, I came across what seemed to be an awesome opportunity to make some points with a card that told me that I could earn up to 2,000 credits by filling out an online survey that would take about 20 minutes. I absolutely went for it. Here is what happened.

My Experience Taking A Survey On Toluna

I started the survey. But in order to take it, a browser window had to open and I had to go to a website—so the survey wasn’t actually hosted within the app. At least, that is what it seemed like to me. But this is not so uncommon, really.

So I got started taking it, and I will admit that it was a bit time consuming—though also pretty simple and straightforward. They were basically asking me questions about streaming TV service providers. Which ones I used, which ones I liked, which ones I had heard of, etc.

So, I was about half way done with the survey, and I got a text that I needed to respond to. So I opened up my text window (this was where I went wrong, apparently) and did so. Then, I tried to go back to the survey—and as my phone tried to reload the page, I got a message saying that it was unable to reload.

I had lost everything. I could not get back to the survey, and I could not continue from where I had started. This was about 10 minutes in, and it was very frustrating.

Now, having said that, I do not necessarily fault the app or the survey for this. If anything, it was a combination of my phone being kind of a cheap phone, and my own lack of technical know-how.

I am not technologically illiterate, but I did know that I was taking a risk by checking a text, and I decided to do it anyway.

If I would have just waited and finished the survey first, it probably would have worked.

So, while I wish that this had gone down differently, I don’t necessarily blame it on Toluna.

But, I was now curious. What if I would have made 2,000 credits on that survey? In all likelihood, I would have earned a lot less, because those ‘earn up to’ surveys always promise a lot and usually don’t deliver nearly as well…

But still, the potential existed to earn those points, so I was interested in seeing how much that many points were worth within the Toluna App.

How Much Are The Credits Worth In The Toluna App?

To figure this out, I clicked on the shopping bag icon located at the bottom right part of the main hub of the app. I had 500 credits listed here, which I think I got when I signed up… because, as of yet, I had not really earned any extra points.

But here, I figured out that $10 gift cards were worth 30,000 points each. This means that $1 technically has a point value of 3,000… which means that the 20 minute survey that I had been working on had been worth somewhere around 66 cents.

That isn’t a very good per-hour pay scale… and therein lies the very common problem with most survey apps.

Most survey apps and sites do not pay quite enough to make them worth the time (especially options like HCD Surveys and SpiderMetrix)—though they often have the positive trade-off of giving you the ability to earn extra cash from wherever you are. This is obviously an upside offered by Toluna as well… but does it make it worth it?

Here is what I decided.

My Personal Opinion Of The Toluna App

Personally, there were some things that I liked and disliked about Toluna. First, let’s talk about what I did like.

I like that you can use it anywhere. I like that it is formatted differently. Flipping through cards was kind of a fun thing to do.

I had never really used an app that did this before, so that was pretty sweet. Also, it seems like there are quite a few survey opportunities available, and that is a good thing.

But, on the other hand, the app did act a little bit glitchy. The surveys are kind of finicky, and while I do not altogether blame the app for this, it did affect me—so that’s a thing. But first and foremost, I didn’t feel like this app gave me the ability to earn enough cash for the time I would have had to invest in it.

I would need to spend too much time on this app to make any meaningful amounts of extra cash to make it worthwhile, to be honest… and that is probably the biggest reason for why I will personally not be keeping it on my phone.

It is certainly not the worst survey app that I’ve ever used, but I also feel like there are just better ways to use my time if I’m wanting to make some extra money.

Our Final Thoughts About The Toluna App