Can You Really Make Money With The MobileXpression Research App? 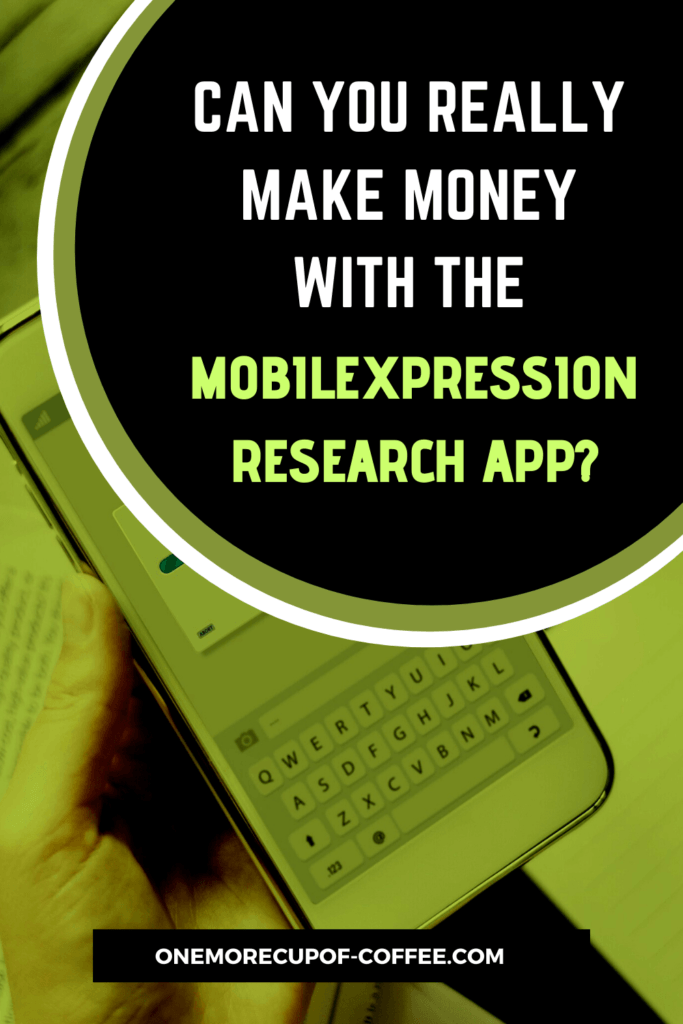 This Google Play Store offering basically allows you to participate in a research community to earn ‘rewards.’ But can you really make money with the MobileXpression Research app?

I had never heard of this one before now—so what you are about to read is a real, unbiased, first-hand-look at my experiences with it.

Did MobileXpression Research meet the expectations, or was it lacking?

The first thing that we need to think about is the app itself. How does it work? Let's take a look.

MobileXpression Research has over 500 thousand downloads on the Google Play Store. It also has 3.2 stars—which, honestly, isn’t that good of a rating… but also not terrible. 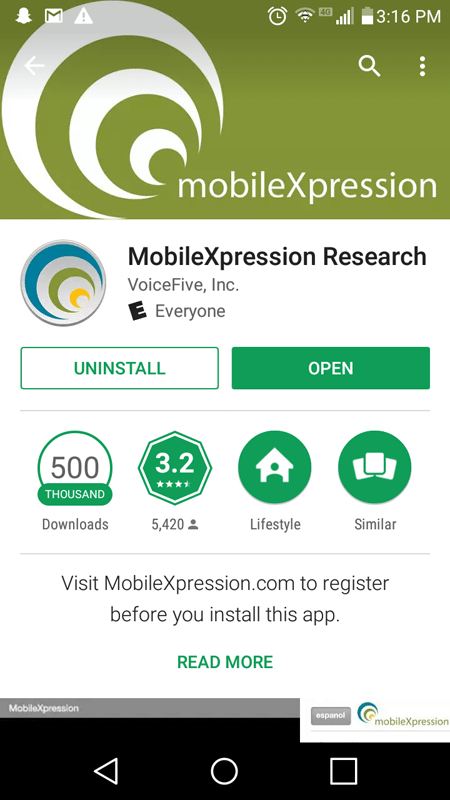 Obviously, our biggest questions were about how much you could actually earn on the app—so we downloaded it and opened it up.

We were greeted first-thing by this screen—which asked me for a code or a phone number. 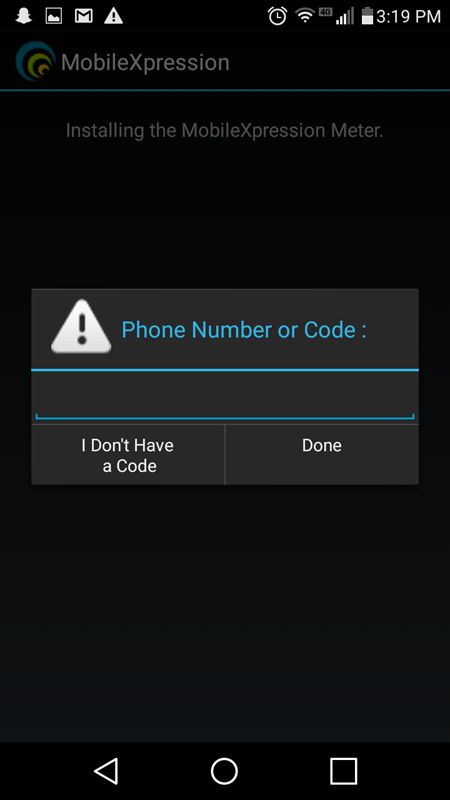 I didn’t have a code—so I entered my phone number.

I was then taken to this screen, which told me that I had to register with MobileXpression before I could install the app or earn rewards. 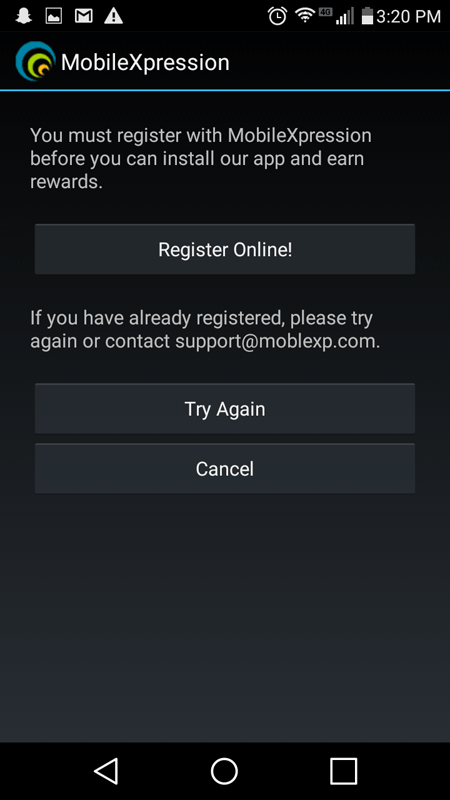 I clicked the ‘register online’ button, and was taken to the mobilexpression website. Here’s what I found on the landing page… 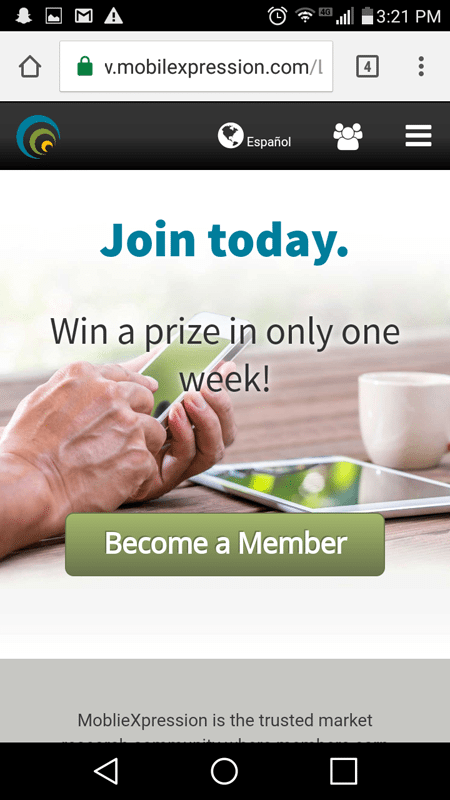 I clicked ‘become a member,’ and was taken to a rather lengthy registration page where I was asked to input my name, my email, my address, my cell phone carrier, my gender, my age, my household size, whether or not children under the age of 18 lived with me, my race, my income, and more.

I was a bit put off by the amount of information that they wanted… but I decided to fill it out anyway. This is typical for survey apps on smartphones.

But then, something kind of weird happened. While I was waiting to decide if I wanted to fill out all of this information, my browser unexpectedly closed. When I brought it back up, I was, instead, directed to a screen that told me that they needed to determine my eligibility by asking me some questions about my cell phone service.

This was surprising, especially since LG was not listed as a brand option!

They also asked me what carrier I was using, and what model my phone was. But after realizing that my phone was not actually listed as an option, I was able to check my other browsing windows and find the registration page again.

I will admit that I was afraid that my review was about to be cut short by this setback—but I decided to go ahead with the registration to see if the phone-option debacle could be avoided.

I completed the information, but was then kicked back to the cell phone carrier/manufacturer/model screen. Since my phone was not listed in the list of options, I instead used by girlfriend’s phone and chose that as an option.

This was beginning to become monotonous and tedious. This was yet another one of those cases where it seemed like the amount of work it was taking me just to get started with the app was quickly diminishing my desire to continue forward.

So I decided to do some research before messing around with the registration anymore, in hopes that I could determine whether or not the extra work it was going to take was worth my time.

What MobileXpression Is All About

In researching this company, I visited the official MobileXpression website… which can be located at mobilexpression.com. Here is a quick quote from the ABOUT page, which does a pretty good job of summarizing exactly what the company does.

“MobileXpression is a market research panel designed to understand the trends and behaviors of people using the mobile Internet.”

Basically, the company installs software on your phone, tracks how you use your mobile device and data, and takes all of this information and turns it into reports.

I figure (this is my speculation… not what I read on the site) that it then sells this information to people/businesses who need to understand how consumers are using their phones (or some variation of this practice… etc. etc.)… Which would explain how they are able to generate income.

One thing that I did read was that the company will never disclose your personal information in any of these reports—which was nice to hear, actually… especially since they ask you so many questions in the registration process!

Next, I clicked on the BENEFITS page of the official website—which is where I hoped to gain some information about what kind of rewards you could win by using the MobileXpression Research App.

But this page literally only had a few sentences on it, and told me very little (which was actually quite a disappointment). Here is a quote from it that pretty much summarized everything I was able to find…

“All MobileXpressions members are guaranteed rewards for their participation; that means prizes such as cash, gift cards, and merchandise.”

This page also said that some members could win weekly prizes, consisting of items like digital cameras and tablets… but it didn’t really give any sort of a clear answer as to exactly what users could expect to earn.

So I turned to the Google Play Store Reviews to find out what I could expect.

I did quite a bit of reading in the Google Play Store reviews, and felt that I found a lot of useful information. Here are 3 reviews in-particular that I felt were worth sharing, as they seemed to deal with exactly the type of information that I was looking for. 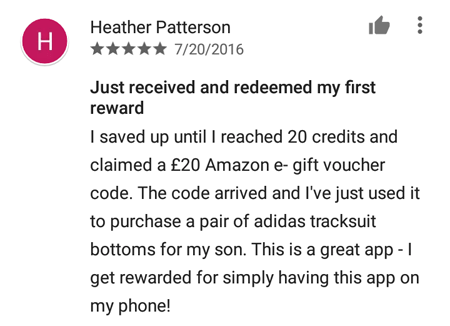 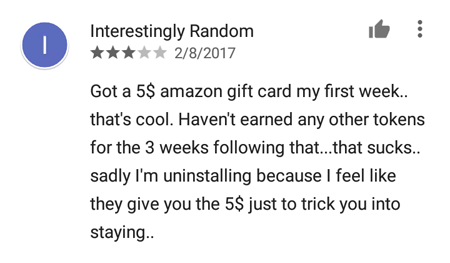 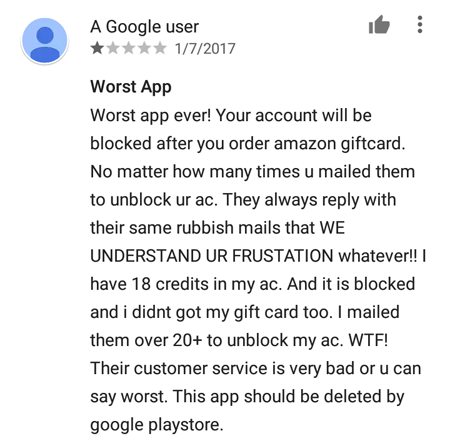 What I found didn’t necessarily surprise me. The company had more 5 star reviews than 1 star reviews, but there wasn’t that much of a difference in numbers between the two. It sounded like some people made quite a bit of money with the app, but far fewer just made a little… and some (many) were very dissatisfied.

Can You Really Make Any Money With The MobileXpression Research App?

I didn’t really care a lot for this app—in any way. For one, I couldn’t even find my mobile phone in the list of compatible devices—and secondly, even when I tried to use my girlfriend’s phone, I was kicked out of the registration and would have had to do it all over again a second time (or so it seemed to me).

Yes, I could have probably contacted tech support to try to get this issue solved and the app working on my phone—but for what? The majority of reviews I read seemed to suggest that $5 in the first month is about what to expect.

Granted, the app seems to run in the background and doesn’t seem to hinder how your phone works when it is installed. So really, the biggest headache (I guess you could call it a headache) involved is the headache of getting it installed.

But some people were also reporting that the app is rife with issues. For example, some people have reported getting locked out of their account after a while, sometimes losing access to their tokens in the process (Tokens seem to be the currency that the app uses to reward users)—seemingly for no reason.

Obviously, it is impossible for me to determine exactly why these things happened. For all I know, these users might have violated the terms and conditions, or did something else that resulted in them losing their accounts.

There is also the possibility that tech support helped them to figure the issues out, as the company seems pretty active in the Google Play Reviews. They regularly respond to critiques and criticisms, which is a good sign, actually.

But therein also lies another important question. Is the $5 a month really worth even getting into contact with tech support? It just sounds like there isn’t a whole lot of extra money to be made here. A $5 gift card here or there is hardly worth a call to tech support, in my opinion—regardless of how easy the issue is to fix.

I guess, in the end, I find myself feeling like it just isn’t worth it. There are a lot of money making apps out there that don’t require near as much work to get started with—and there are also a lot of apps where you have a lot more control over how much you actually earn. There are even other ‘passive' apps out there, like Smart Panel (for Apple only), MobileXpression and SavvyConnect.

Granted, this app gives you basically free money—but I don’t feel that I would be interested in going to the trouble for it.

Our Final Thoughts On The MobileXpression Research App

Can You Really Make Money Selling Books Online?
Next Post:How To Make Money Even If You Have A Criminal Record