Can You Really Make Money With The Ibotta App? 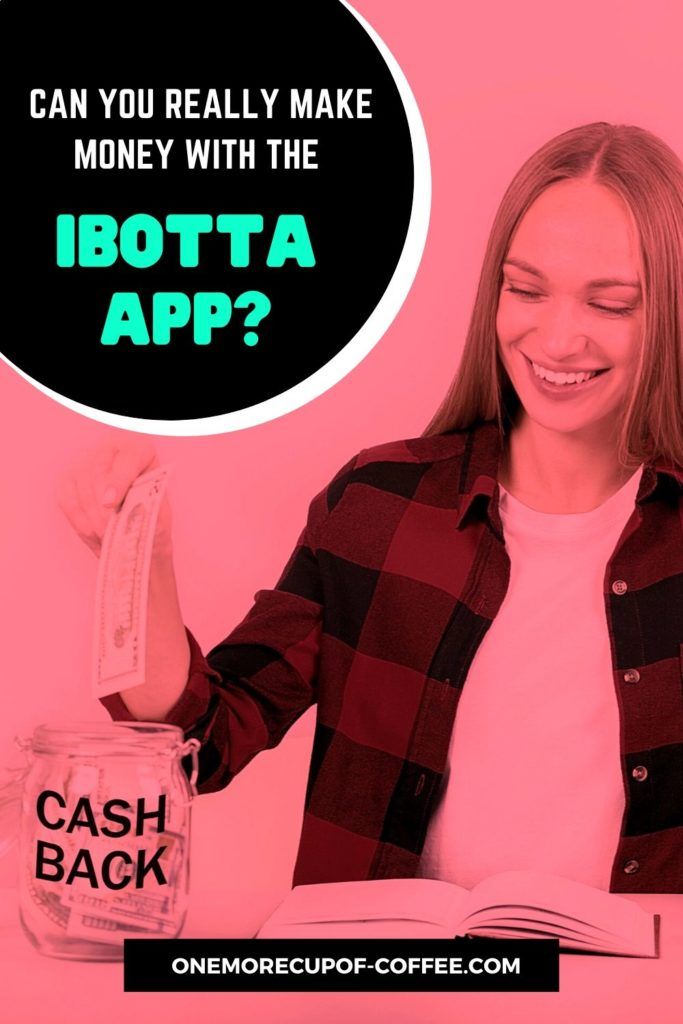 I first heard about this app when I was researching coupon and savings apps—and I was instantly intrigued. As you might expect, I love saving money on necessary purchases, because money saved is basically money earned—and I love earning extra money. But can you really make money with the Ibotta app?

That’s what I wanted to figure out, so I downloaded it and decided to try it for myself. Here’s what I found out.

Can You Make Money With Ibotta?

Getting Started With This App

How Does Ibotta Work?

Getting Your Cash (Payday!)

Can You Make Enough With Ibotta To Make It Count?

Our Final Thoughts On Ibotta

“Cash back savings and discounts for shopping: Target, Walmart, CVS, Grocery and more.”

There was a Youtube video advertisement for the app as well, which pretty much described what it did and how it worked. You can view the video here, on the official Ibotta Youtube channel.

Basically, Ibotta claims to help you earn cash back when you make everyday purchases. There is a pretty handy ‘How It Works’ section hosted on the app as well, which we took a screenshot of, just to show you. 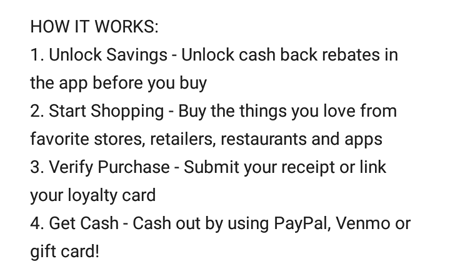 As for the app itself, it has over 5 million downloads and has a very attractive 4.5-star rating on the Google Play Store. 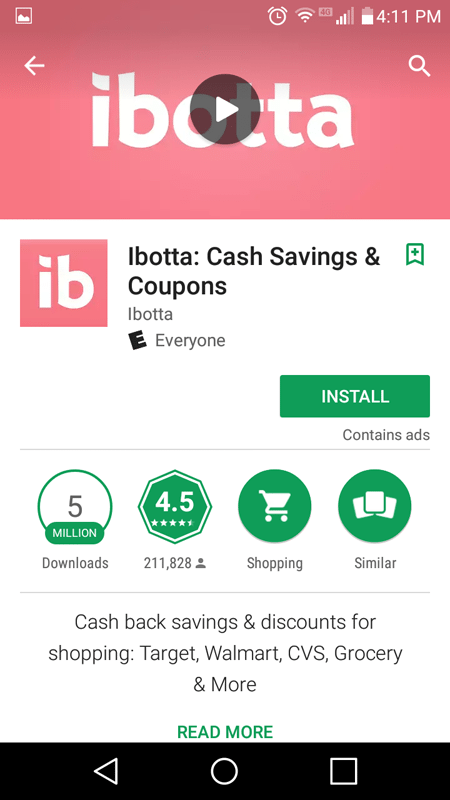 But I never just take such information at face value. So far, Ibotta had a good start—but I wanted to see how the app actually worked for myself.

Here’s what happened when I downloaded it and gave it a try on my own phone.


Getting Started With This App 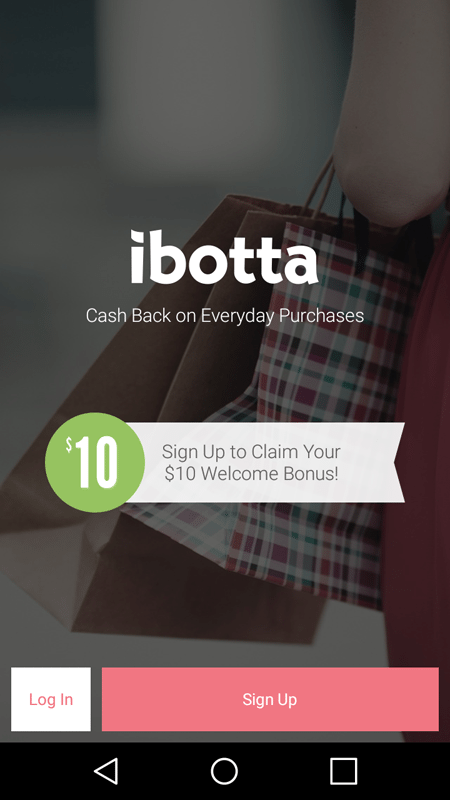 Signing up could apparently earn me a fast $10—which I was pumped about (later, I found out that you have to actually shop, make a purchase, and verify it with a cash-back offer to get the extra bonus $10 back, but that was understandable)!

So I decided to sign up. I did so using Facebook, which was relatively painless. It loaded within seconds and took me to a page where I needed to register by filling in some basic information.

My information from Facebook was already filled out—but I needed to create a password, write in my zip code, and refer friends (this was optional) at this point. I filled out what I needed to fill out, and clicked ‘Create Account.’

Next, I was taken to a screen where Ibotta asked me to pick out a few of my favorite stores. 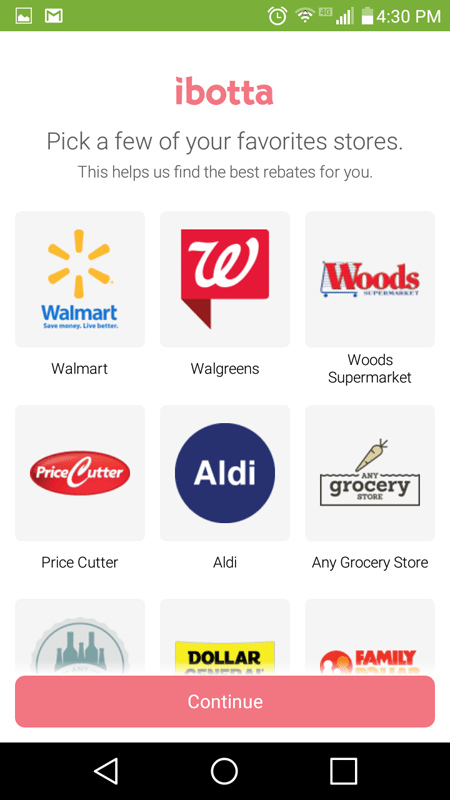 I picked out a few stores and went on to the next page (make sure to choose all of the possible stores you might possibly be interested in shopping at because this seems to impact how many different offers you get in your feed).

Next, I was taken through a few different pages that described, in pretty basic detail, how to use the app. This was pretty simplistic, and I found it easy to understand.

You can browse items by category, or by what’s new. We decided to just browse by ‘what’s new,’ and came up with options like these…

I’ll be honest, I saw some pretty good deals on this page. $3 cash back on Smirnoff Vodka? A bottle of that usually costs about $12 at my local retail store, give or take—so that would be a pretty big cash-back bonus!

(Note: This app doesn't necessarily save you money… it gives you cash back on purchases. So I would still need to fork out the $12 for the vodka. But I could get $3 cash back on it as a reward. I just wanted to clarify that!)

But now it was time to see how the app actually worked… so that’s what I looked at next.

How Does Ibotta Work?

I started watching it. I had the option to skip it a few seconds in, so I did… and was quickly taken to this page. 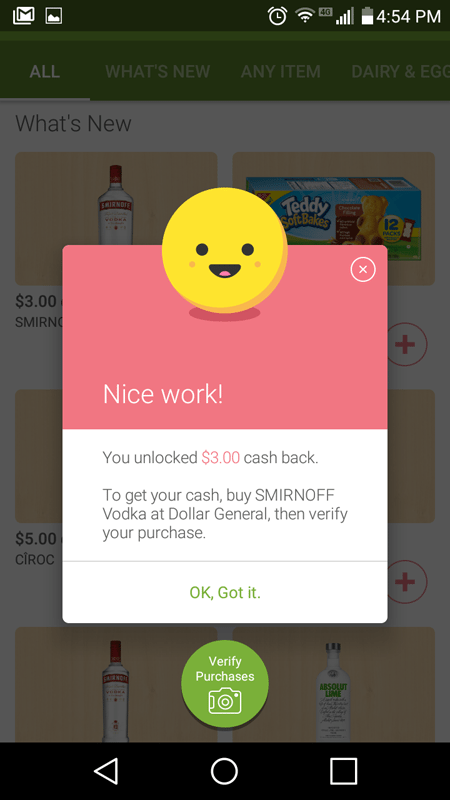 Ok, at this point I learned a few crucial details about how the app actually worked. First of all, there was a specific store that I needed to buy the product from (it would seem that way, anyway), which was a very important detail. This is where I figured out that selecting the right stores at the beginning of the app process seemed to make a bit of a difference in the deals that you see in your feed.

Secondly, I had to verify the purchase before the cash back would be credited to my Ibotta account… which was basically accomplished by doing two things.

First, I had to scan the barcode. Second, I had to take a photo of the receipt.

Here’s what the barcode scanner looked like. The app seemed to do a good job with it. 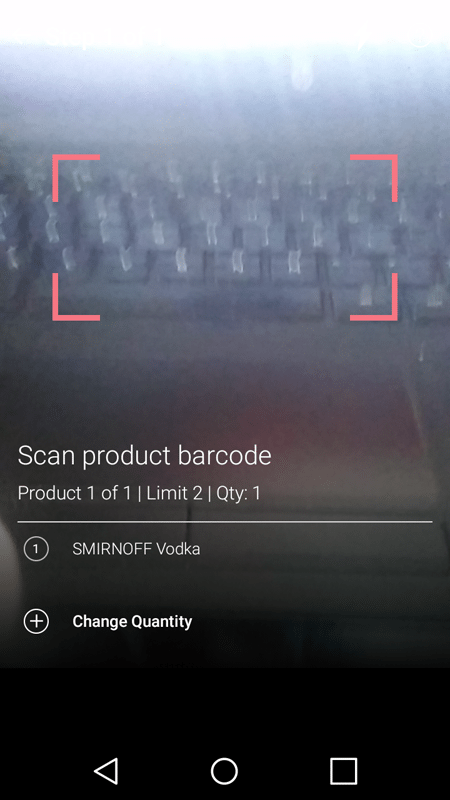 Once you perform these two steps, the app says that you will have your cash back within 24 hours (notice the limit–so you can't use the deal an unlimited number of times).

But how do you get your cash back out of Ibotta so that you can spend it?

That’s what I decided to look at next. Here’s what I found out.


Getting Your Cash (Payday!)

At this point, I had figured out how the app worked. I was pleased with it thus far. But now I wanted to be sure that I was going to be able to access any cash-back that I managed to accumulate by using the app… and for that, I went to the drop-down menu at the top-left corner of the app screen, and scrolled down to the ‘Withdraw Cash’ page.

Here’s what I found when the page loaded. 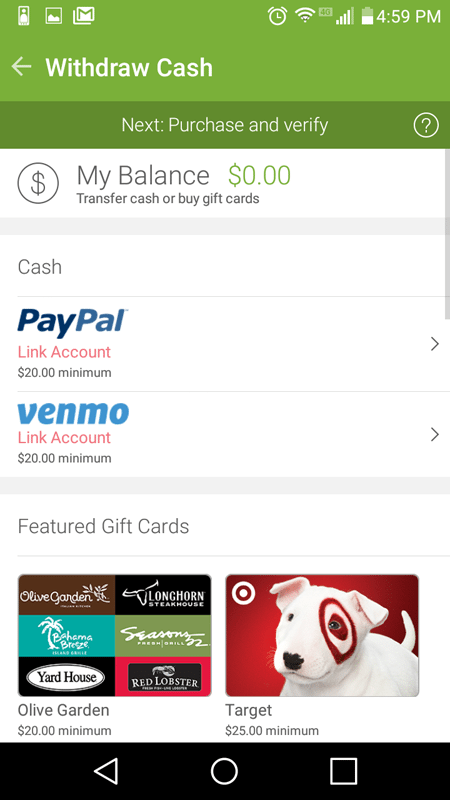 So here, I learned that I could link my PayPal or my Venmo to my Ibotta account, and withdraw my money straight out of the app that way—which was pretty awesome. Granted, you need a $20 minimum to actually withdraw your money this way, but I really felt that I would not have a problem getting that much saved up with the amounts of cash back being offered on the app.

You could also redeem your cash in a gift card. The app will let you cash out using a wide, wide variety of gift cards. Almost any retail-store gift card that you can imagine is available on Ibotta, which is awesome.

I would still probably choose PayPal, but it is nice to know that I also have a ton of gift card options as well.


Can You Make Enough With Ibotta To Make It Count?

At this point, I felt that I had learned enough about the app to figure out what was going on. I also figured out what kinds of deals I could find on it, and about exactly how much I could save/earn with it.

Here is what I will say about Ibotta—it is an extremely useful app to use if you tend to make quite a few regular purchases of products that sometimes show up on it. Obviously, there is no way to know exactly what kinds of cash back deals you will find, but most people will likely find an item or two every time they shop that they can scan to earn cash back for—if not even more than that.

Personally, with as little as I shop, I could still easily see myself earning $5-$10 a month without even really trying with this app. But if I used Ibotta very deliberately, and planned out my meals based on what was offered on it, then I could probably make a lot more—somewhere closer to $30 per month.

Technically, the app worked really, really well. The pages were easy to scroll through, the barcode scanner worked well, and I found it super-easy to figure out. There are a lot of these types of apps out there, and I dare-say that I’ve had good experiences with most of them—and Ibotta certainly continues this trend.

These cash-back apps help everyone—including the consumer (you and I).

You might not get rich using it, and yes, you need to spend money in order to make money—but if you are only spending money on essential items anyway, and then scanning these applicable products to earn the respective cash-back, then you can stand to gain quite a bit of extra cash back with Ibotta (quick tip: you can use more than one cash-back app like this to earn even more).

To be super-honest, I liked it. I felt like it did what it was designed to do with minimal difficulty, and felt that I could see myself using it quite a bit. I don’t do a lot of shopping, but I could still earn some considerable cash with it (especially if I planned things out better), so I give it two thumbs up.

It’s not necessarily the only app of its kind—but it’s a good one. You’ll find that it will work a lot better if you stay consistent with it, though—so make sure to commit to it for a bit once you decide to use it, as that’s really the only way to see consistent, positive results with apps like this.

This app is especially useful if you really, really like to shop, and don’t mind using apps while you shop to help you make the most of your purchases. On the flip side, this app is probably not for you if you hate fiddling with apps before/during/after shopping trips.


Our Final Thoughts About Ibotta

Jobs for Burnt Out Nurses Who Need A Change Of Pace
Next Post:The Best Jobs For Nurses Who Are Moms