Can I Really Make Money With The Embee Mobile Performance Meter App? 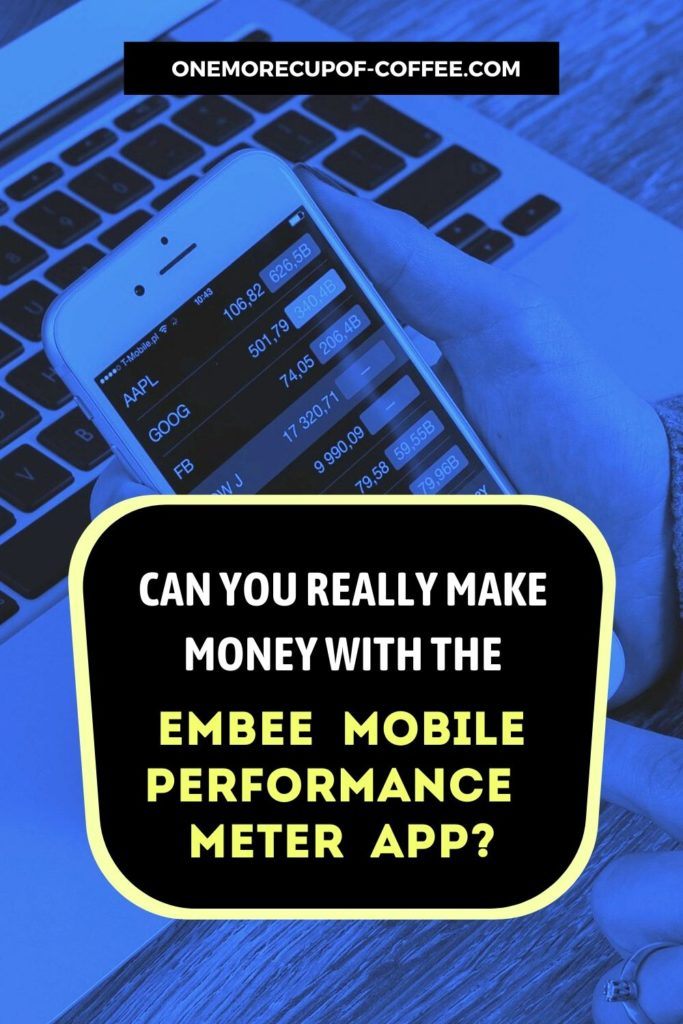 From what I understand, this app just runs in the background, allowing you to rack up points that you can use to earn gift cards. But can you really make money with the Embee Mobile Performance Meter App?

Admittedly, I have never really tried an app like this before. I have tried screen lock apps in the past, but this sounded like something different entirely.

The stats for it weren’t too bad either. 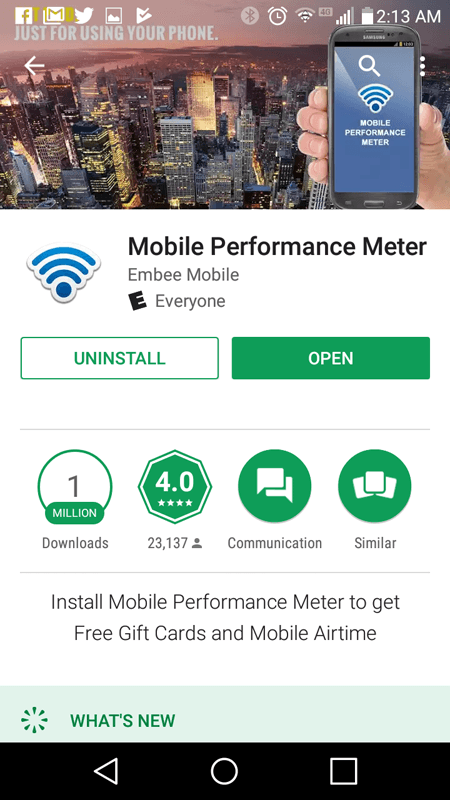 With over 1 million downloads and 4.0 stars in the Google Play Store, I was pretty optimistic about this one, right from the start.

Of course, I did have a few doubts. What if the app slowed my phone down, or otherwise affected it by running in the background?

I wasn’t quite sure what to expect… which is a bit part of the reason why I was excited to give it a try.

When I first opened up the app, I was greeted with this brief introductory screen. 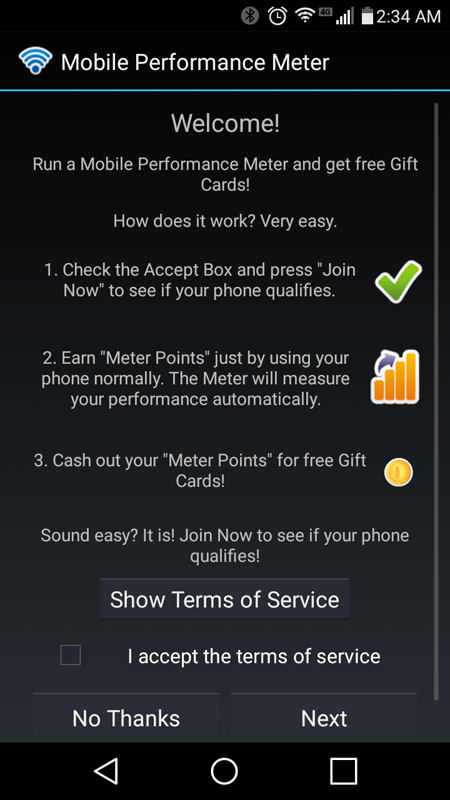 This screen did quite a bit to help inform me about some of the crucial bits of information about the app. Pretty much, you just install it, let the meter run, and you will rack up points. The meter will measure your points automatically, and you can cash out your points for free gift cards.

Pretty simple, right? I thought so.

I moved forward from this screen, and onto a screen where I was asked some basic questions about myself. I filled in my birth year, my gender, my ethnicity, and whether or not I was Hispanic. This only took a moment.

After this, all I had to do was ‘confirm my carrier information.’ This was a pretty simple process in which I just selected my mobile carrier out of an entire list of options.

If your carrier is not listed, then it may mean that your device is not supported by the app–but most providers are listed. There were even providers in the list that I had never heard of!

That is when I was taken to what seemed to be the ‘main hub’ of the app. This is what it looked like. 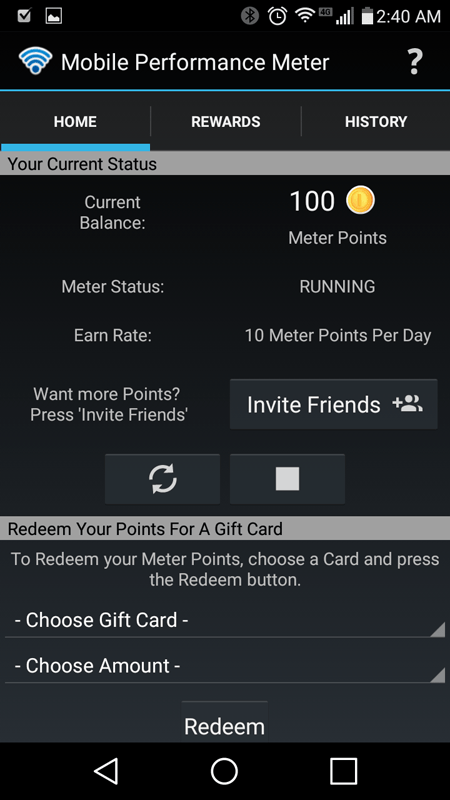 But then, before I could really do anything else, this screen popped up. 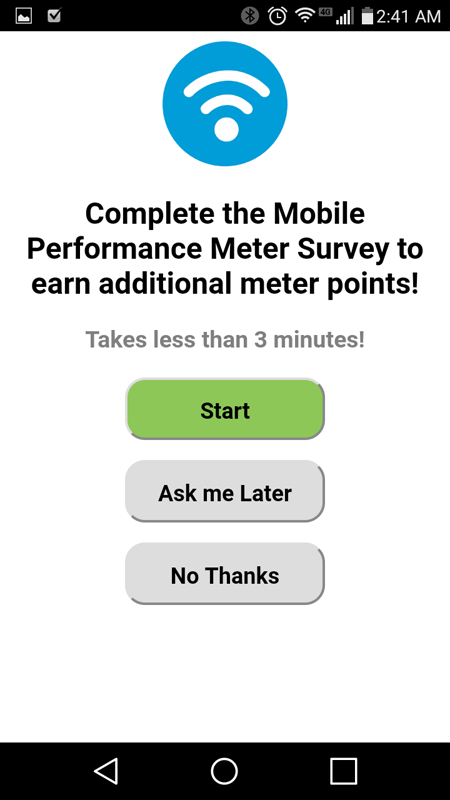 At this rate, I was only going to earn 10 points a day, which didn’t seem very good—so I definitely wanted to see if this survey would change that.

The survey was pretty simple. Basically, I needed to answer a series of questions about my cell phone provider, rating most of them on a 1 to 10 scale. Once I completed this, I was kicked back to the main hub.

This really only took about a minute actually, before I finished it… and to figure out if I got any extra rewards for completing it, I slid the page over to the ‘Rewards’ tab. Here is what I found. 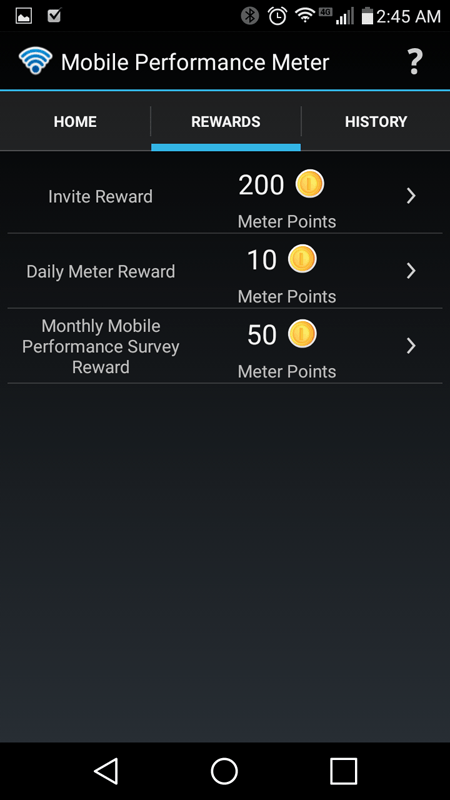 Basically, doing this survey earned me 50 points, and I also found out that there is often at least one of these surveys available every month to help you earn extra points.

So, at this rate, I am earning 10 points a day, plus 50 points a month from the extra survey.

This comes out to about 80 points a week or so, when we average this out and spread those 50 points out over the course of four weeks.

But how much money will this earn us? That is what I was determined to figure out next.

How Long Will It Take You To Earn A Gift Card With The Embee Mobile Performance Meter App?

To figure this out, I went back to the ‘Home’ tab, and scrolled down to the bottom of the screen. There is a ‘Choose Gift Card’ option there, and I found that there was a pretty huge list of gift cards that you could choose from.

I chose Amazon.com, simply because that is usually my favorite option when I can’t do PayPal, and then moved on to see what kind of dollar amount these points converted to.

Here is what I found when I went to the ‘Choose Amount’ tab. 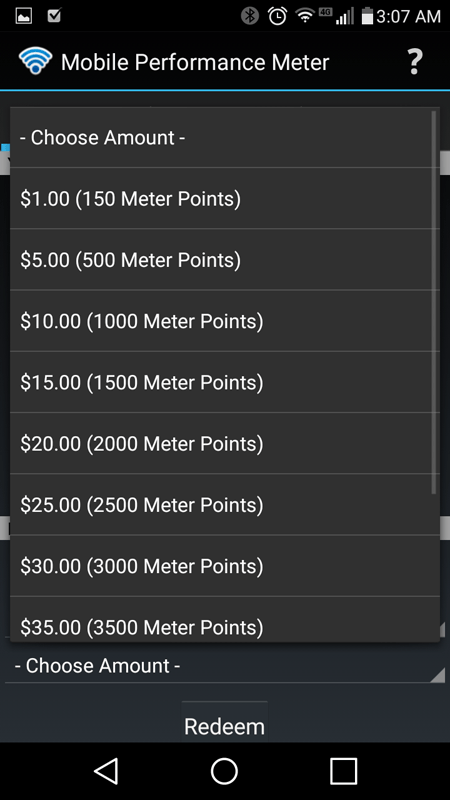 By my calculations, in one typical month, I could earn about 330 points. That means that it would take, roughly, a month and a half or so to earn enough for a $5 Amazon gift card.

All of that, just for an app that runs in the background?

From the sound of it, you don’t really have to do anything to keep the app going. It sounds like it just runs in the background, without you needing to babysit it or anything, other than taking one random survey every month.

But, just to make sure that I wasn’t missing anything, I decided to take a look at the Google Play Reviews as well, just to see what other users have said. So that’s what I did next.

I went to the Google Play Reviews and starting looking around to see what other people were saying about the app… and I found that the vast majority of people had nothing but good things to say about it!

So yeah… after reading these reviews, I was definitely digging how it all sounded. One thing that I was disappointed with was that some people seemed to say that the app used to pay out more.

That would definitely be nice, but still… this is literally free money that you are getting, just for letting the app run in the background, so you can hardly argue with that!

Will I Be Leaving The Embee Mobile Performance Meter App On My Phone?

I actually may end up leaving this one on my phone, to be honest. I mean, this is literally the closest thing to ‘free money’ I have ever really seen in an app. There are some upsides and downsides, from what I can tell… but I also feel that the upsides certainly outweigh the downsides.

For upsides, the app works really well. It has an awesome reputation, and people seem to genuinely like it.

Granted, it does have to run constantly in the background—but from the sound of it, it won’t impact your phone’s performance, outside of giving you random survey popups every once in a while. Plus, you earn extra points for those, so that’s a good thing.

It is also easy to put on your phone, and very low-maintenance, from what I can tell. I also like how it tells you exactly what you can expect to make. I really like that part of it, because it gives you the ability to see exactly what you are going to be getting for the specific amount of time that you plan to use it.

I also like that there are SO MANY TYPES OF GIFT CARDS AVAILABLE.

Now for the downsides. The one major downside that I see to this app is that you won’t be able to earn a ton of money with it.

If you have aspirations of earning some serious cash or getting rich, I am afraid that this app will disappoint you. The same is true for other similar types of apps and websites, like SavvyConnect, MobileXpression and the Nielsen Mobile App.

But… the style is good for a bit of extra money that you can use on gift cards to your favorite places! I liked that there was an Amazon gift card option—but there were also many more of them that I could get into.

So yeah. I kept this app installed on my phone for about 24 hours before completing this review, and I can also say, with a lot of certainty, that it hasn’t had a negative effect on my phone that I can tell either, so that’s another good thing.

All things considered, the Embee Mobile Performance Meter is certainly not a bad app to try! It won’t make you rich, unfortunately… But if you want some random gift cards now and then from cashing in your points, this one will likely do the trick!

Our Final Thoughts About The Embee Mobile Performance Meter App