Can you Really Make Money With Organo?

Organo’s main focus is products containing Ganoderma Lucidum, which is supposed to offer health benefits. I’m far from convinced and the company offers little evidence to prove its point. Even though reviews seem to like the taste of the coffee, it would still be hard to sell and the company’s commission plan is average at best. Overall, Organo is just most other MLMs and you would be struggling against a challenging system right from the beginning. 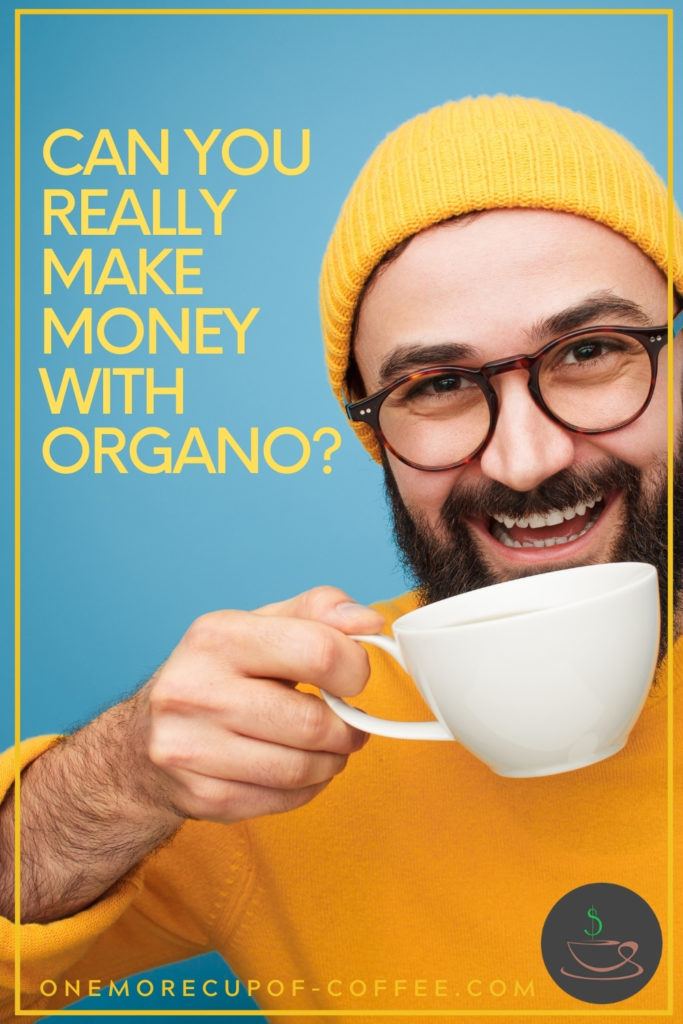 An MLM that sells coffee and a range of other products containing the mushroom Ganoderma Lucidum.

Organo’s main focus is products containing Ganoderma Lucidum, which is supposed to offer health benefits. I’m far from convinced and the company offers little evidence to prove its point. Even though reviews seem to like the taste of the coffee, it would still be hard to sell and the company’s commission plan is average at best. Overall, Organo is just most other MLMs and you would be struggling against a challenging system right from the beginning.

Organo specializes in coffee along with similar products, like tea, hot chocolate, and brewing cups. The company does actually have a second range as well that isn’t emphasized as much. That one is focused on the body, but it just contains a few supplements, one type of soap, and one type of toothpaste.

That second set of products might seem a little odd, but it does tie into the overall theme of the company, which is Ganoderma Lucidum.

Ganoderma Lucidum is actually a mushroom with a history in herbal medicine. It is also sometimes known as the Reishi mushroom or Ling Zhi. Like many companies, Organo has taken a single natural product and is hyping up its potential benefits for health.

Even if you did believe in the benefits of Ganoderma Lucidum, this particular coffee might not be a good way to get them. For one thing, the company doesn’t even specify how much of the mushroom is in there.

At the same time, you are dealing with a supplement (in coffee form). The supplement industry is majorly under-regulated. So, there might be very little Ganoderma Lucidum in the coffee at all. If that’s the case, then you probably wouldn’t see any benefits from the coffee.

The one thing that I will note is that the products do seem to get good reviews on Amazon. For example, one version got an average of 4.7 stars across 574 reviews. That’s pretty impressive.

It is likely that some of those reviews are fake. They might come from distributors or the seller might have purchased positive reviews. But, the high number suggests that a decent proportion of the reviews are real. Of the reviews, many did talk about enjoying the taste of the coffee, so the product might be appealing in that sense.

So, the coffee might be okay for taste alone, but I highly doubt the Ganoderma Lucidum in it offers any benefits at all. It’s also important to note that the powdered form of the mushroom has been associated with a toxic impact on the liver. That is a particularly concerning the outcome, as the coffee does use a powdered form.

The key thing about the products at any MLM is how well you can sell them. In the case of Organo, you might have your work cut out for you. For one thing… coffee can be hard to sell.

In many cases, people buy coffee because of the way it tastes, so they lean towards coffee that they like. People also tend to be pretty brand loyal and getting them to shift brands can be quite difficult. If nothing else, people are very hesitant about the idea of paying money to find out whether they like a particular product.

With so many different kinds of coffee available at grocery stores and specialty stores, Organo’s coffee would really have to offer something Amazing for people to want to buy it through distributors. Otherwise, people are likely to get whatever is easier for them to access.

There is also another major challenge in selling the product, people don’t have to buy through distributors. For example, when I searched the term Organo Gold on Amazon, I found 922 results in the Grocery & Gourmet Food category, and those products came from a range of different sellers.

That puts distributors at a major advantage. Even if the products were more expensive on Amazon, many people would buy that way because it is more convenient. And they’re not. Take this example from Amazon: 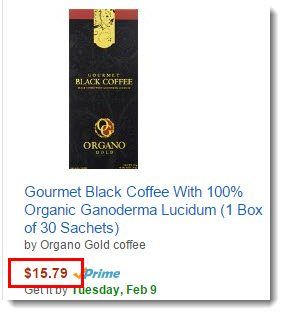 Buying exactly the same product through Organo’s website would cost $27. That latter price is probably around what distributors are expected to charge too.

As a distributor, you would have to compete against Amazon’s significantly lower price, as well as with other distributors and any other places that sell the coffee. Honestly, I don’t like your chances of being successful. Usually, distributors are barred from selling on Amazon because it brings down the price like this. I suspect these are distributors no longer working with the company that just wants to get it off their hands.

As with many other companies offering ‘amazing’ health products, Organo is an MLM and the company does certainly hype its opportunity.

Realistically, there isn’t anything particularly unique or unusual about the company’s business opportunity. Instead, distributors are simply selling products, building a team, earning commissions, and earning bonuses. That’s exactly the same as just about every MLM out there.

The company does have one advantage in that it provides distributors with a website that they can sell products from. So, they don’t actually need to buy the products to sell them and distributors can (in theory) target an online audience. But, the website is simply a duplicate of the website that every other distributor gets, so you certainly couldn’t rank for it in search engines.

Through its compensation plan, the company promotes 7 ways of earning money. These are as follows:

Having 7 ways of earning money sounds like a lot and honestly, that claim isn’t really true. Out of that list, there are two main ways to earn money, through selling products, and through the success of your team. Beyond that, everything else is just bonuses.

Your potential to earn bonuses increases as your team size increases, as you go up ranks, and as your own sales increase. In practice, earning bonuses is often difficult and most people in an MLM earn few to no bonuses.
I also want to point out that there is still nothing unique about the approach.

Most MLMs offer a similar set of bonuses. The specific bonuses might change from one company to another, but in general, there are more similarities than differences. Overall, the bonuses simply provide additional incentive to get distributors pushing to grow their team and make sales.

In general, the compensation plan is fairly typical for an MLM and is pretty complicated. To make decent money from the company you really would need a good-sized team and you would need to hit many of those bonuses. Is that realistic? No, it really isn’t.

The company does provide some information about how much distributors receive, but that information isn’t very helpful.

According to this, 86.34% of participants earned between $0 and $599 per year. That’s a pretty big range of income. Personally, I’d like to know how many earned less than $100 in a year. But, of course, the company doesn’t provide that much information.

That statistic tells you just about everything you need to know about your chances of making a decent income through this company.

To a degree, there are people who do make a living from an MLM. But, those people are few and far between.

At its heart, an MLM is designed to promote recruitment. The companies want members to recruit as many new people as possible. Because of that, most of the bonuses are tied to recruiting. It’s a flawed system though because the company can only be successful if most of the people it recruits don’t manage to grow their teams to a decent size.

When a system rewards people MORE for recruiting than selling, the vast majority of IBOs will opt to recruit sellers rather than move product. This turns it into a product-based pyramid scheme.

Affiliate marketing offers an alternative to the MLM model. Initially, affiliate marketing looks a bit similar to an MLM, because you are still earning a commission from selling a product. But, that really is the only similarity.

With affiliate marketing, you use the internet as a tool to make sales and to make money. That gives you a much larger reach than local “parties” at your house and gives you the ability to grow your business much further than you could be selling to people physically.

At the same time, affiliate marketing isn’t team-based. So, you don’t need to recruit people and you don’t need to build a team. You reap 100% of the rewards from your efforts, and there's no pressure to have strong leadership or motivation other than motivating yourself. I love that aspect of it.

Can You Generate Reliable Income With Organo?

Organo is just like most MLMs out there with a compensation plan that is pretty average at best. There is also very little evidence to back up the health benefits claim of their products. This will make it even more challenging to earn a reliable income with Organo.

[Nootropics] Affiliate Niche Research
Next Post:How To Write A Product Review That Converts To Sales