Can You Really Make Money With The Lucktastic App? 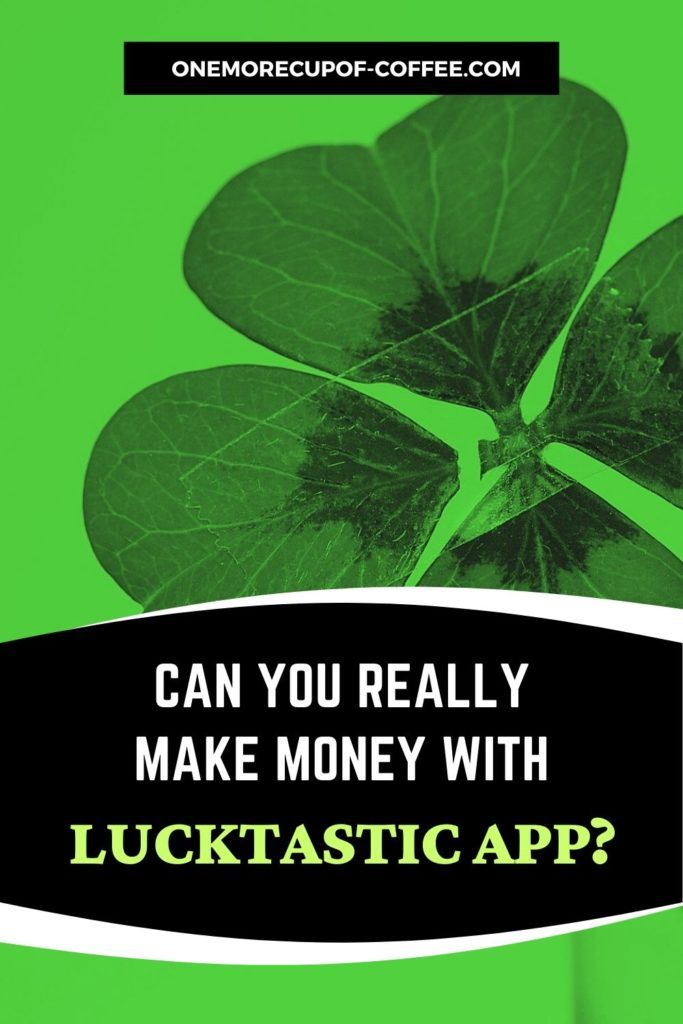 If you have EVER read about or researched apps that could possibly make you some side-cash, then you have doubtlessly heard about this one. This app is one of the most popular cash-making apps in existence today. But can you really make money with the Lucktastic app?

I was more than excited to give this one a try. It’s been on my radar for quite a while now, and I finally decided to download it and give it the trial-run it deseves (cracks knuckles… sits down at desk… strikes dramatic pose).

How To Make Money With Lucktastic

First, let’s take a look at the basic stats.

The app has over 10 million downloads, and has been reviewed by over 230,000 people. To put it quite bluntly… the user base is HUGE. It also has a 4.2 star rating on Google Play, which is certainly above average for apps like this. 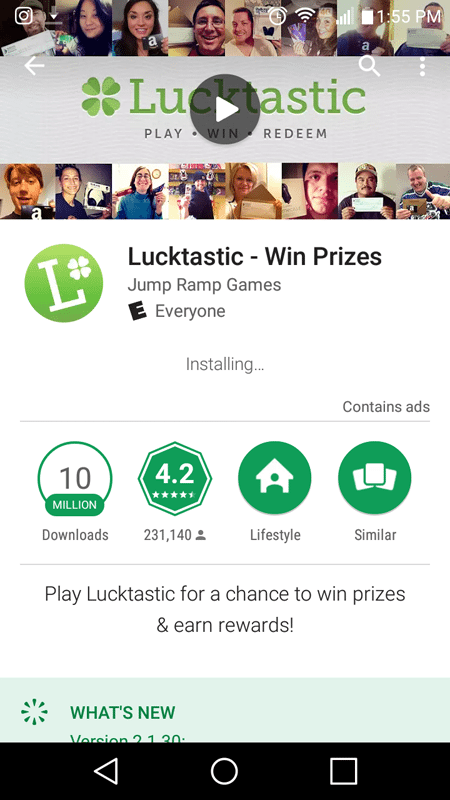 Upon opening the app, I was surprised to find that the display defaulted to a landscape view. 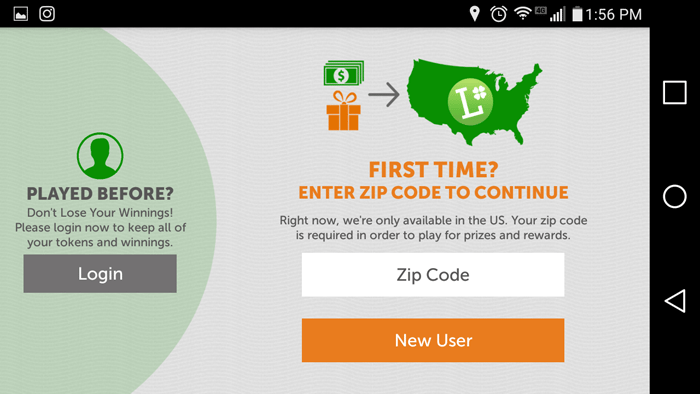 This was unusual, but also pretty cool. It made everything easier to see. This was the first screen that I saw when I opened up Lucktastic for the first time, and since I have never had an account with them before, I went ahead and entered my zip code to begin the process.

As of right now, the app is only available in the US. That is good for US residents, bad for everyone else… but I had no complaint (I live in the middle of the United States… in a tiny town… so Lucktastic seemed like a perfect fit for me thus-far).

After a loading screen that featured a spinning clover graphic, I was taken to this page. 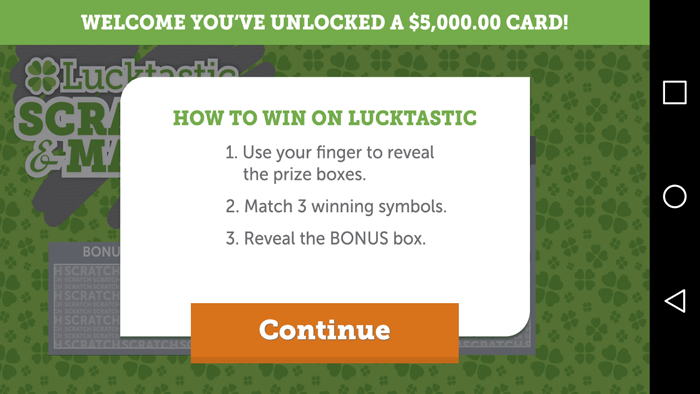 Right away, I will admit that my attention was immediately grabbed by the banner along the top, which told me that I had unlocked a $5,000 card! Part of me hoped that this meant $5,000 in cash… but I had a feeling it was more of a lottery-ticket card with the potential to win $5,000.

But still, I was pumped about it. I was also given some pretty good instructions about how the app worked. The steps were pretty easy to understand…

This seemed pretty straightforward to me, so I clicked ‘continue.’

Next, I came to that $5,000 card that I was talking about earlier! Here’s a screen-shot of what it looked like… 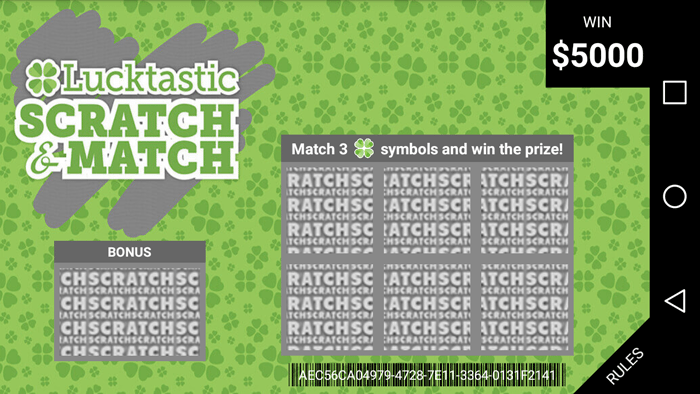 I was right—it was like a scratcher. Now it was time to play and, hopefully, earn some sweet cash!

Playing My First Game On Lucktastic

I scratched the scratcher until all of the squares were all clean. I also scratched off the bonus part. I was awarded 100 tokens in the bonus section, but nothing else. Once I had scratched everything off, a ‘claim’ button popped up, which I clicked.

This took me to the next screen. 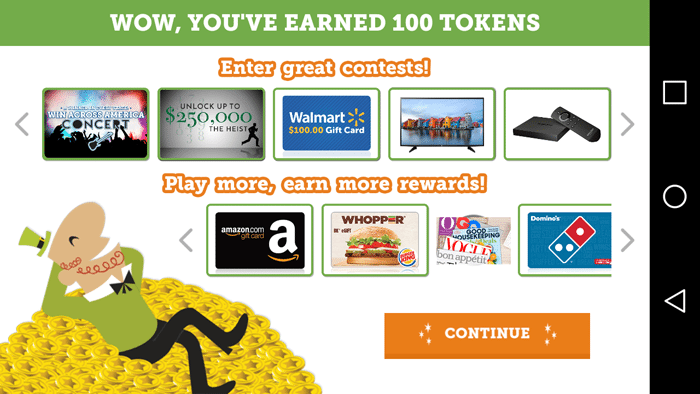 I clicked continue to get to the next part of the app. This brought me to yet another screen. 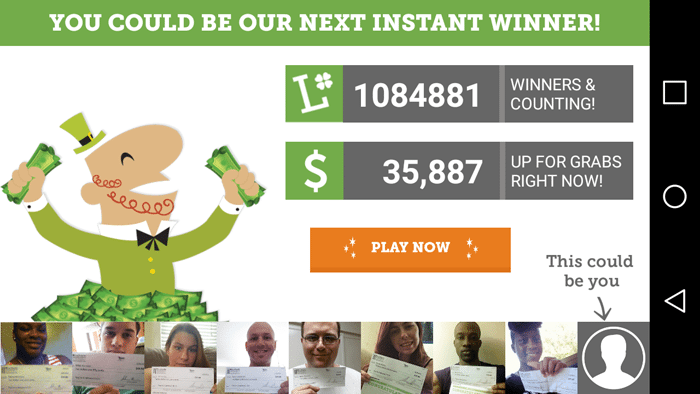 I clicked ‘play now,’ because I was really interested in winning something awesome… and this brought me to what seemed to be the ‘main hub’ of the app. 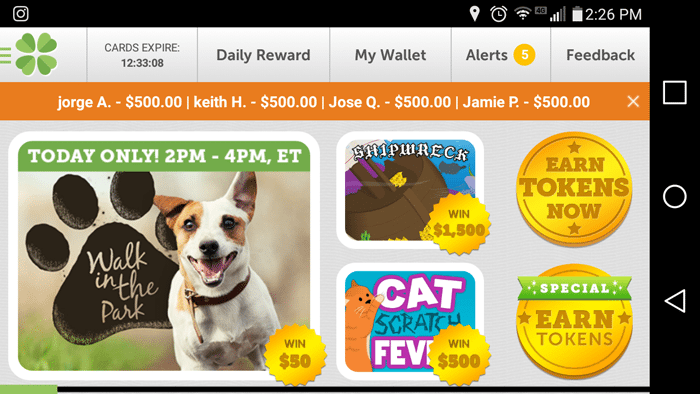 Here, I could pretty much see everything that the app could do. The little clover in the upper left hand corner was a drop down menu. I saw that I could attempt to win $50 with a scratcher in the ‘Today Only’ section, so that’s what I tried first.

I clicked on it, and was taken to another screen. But before I could do anything, I had to watch a video ad. After that, I had another regular ad pop up that I had to exit out of.

And thus… we see how Lucktastic makes their money!

But the ads weren’t super oppressive. They were over in less than 30 seconds, so that’s not such a bad thing.

This scratcher was pretty much exactly like the last one—except that instead of earning no cash and 100 tokens, I earned no cash and 4 tokens!

But now, I had the scratcher-fever. The app was pretty fun, to be fair… so I decided to do all of the scratchers that I could.

You don't have to watch the whole video because it's a little long and boring, but skip around a bit and you'll see the kinds of games available.

What I Ended Up Earning On My First Day With Lucktastic

Before being able to do anything else, I was prompted to register with Lucktastic… which didn’t surprise me. So I did, using my Facebook login information.

It was pretty easy, as it usually is. Lucktastic, however, wanted to be able to post to Facebook for me! This alarmed me just a little bit… but I set the privacy settings to ‘only me,’ just in case… and then continued the registration process.

Then, I started scratching. Here’s how I did…

How Much I Was Able To Earn With Lucktastic

About 15 hours and 20 scratchers later (it didn’t take me 15 hours to play 20 scratchers. I waited long enough to get the daily bonus), I ended up here. 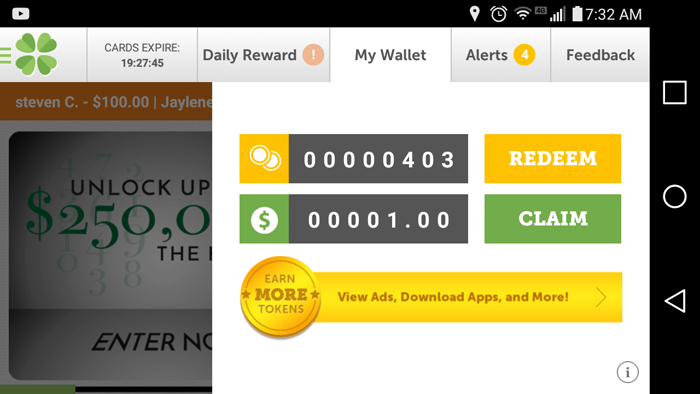 This is what the inside of my ‘Wallet’ looked like. I had earned a total of $1 in prize money, and 403 Tokens.

Now, I know that $1 is worth $1… but I wasn’t sure what the Tokens would give me—and that is what I wanted to figure out next.

You pretty much get Tokens every time you play. Often, they are the only thing you actually get, and are located in the Bonus Box.

But you also get extra Tokens for Daily Rewards, and there are some scratcher games that reward you with Tokens specifically, instead of with cash.

This app is pretty cool because even if you don’t win cash, you can still make Tokens… and you do, on every scratcher. So you will always win something. But I wanted to figure out exactly how much they were worth.

How Much Are Tokens Worth In Lucktastic?

From the ‘My Wallet’ section of the app, I clicked on the ‘Redeem’ button, and was taken to this page. 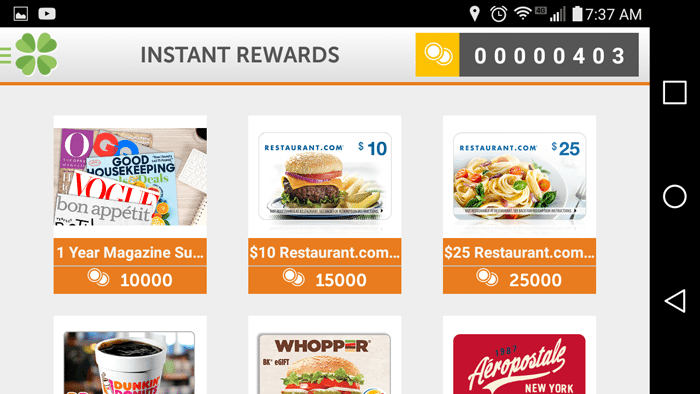 In one day, I had pretty much earned 403 tokens… and to be honest, the scratchers that I played to earn those didn’t even take up a huge portion of my day. I just played them in my down-time… but they ended up adding up in terms of Tokens.

If I could increase my daily Token income to 500 (which would take a bit more or even less time on some days, depending on how well the Daily Deals are in the long run), then I could earn the gift card in 260 days.

But at the same time, Lucktastic is giving me the opportunity to earn actual cash with the scratchers—so it is important to keep in mind that you are not just getting Tokens when you use the app.

I mean, I won $1 on my first day. At that rate, in theory, I would earn $260 by the time I had used the app 260 days (Though I have no way of knowing if that is actually an accurate prediction. It probably isn’t.).

What Did I Personally Think Of Lucktastic?

Personally, I can definitely see the appeal of this app. It has an almost gambling-esque feel to it, but therein lies the magic. You download the app for the scratchers, really, which are pretty fun—but are rewarded with Tokens even if you don’t win, so Lucktastic has made it possible to rationalize playing, even if you never really earn cash rewards!

The app is full of good points. The only bad points that I see are probably that you don’t win at the scratchers very often, and that you will need a lot of Tokens to actually score a gift card.

But—with that being said, the app still makes itself worthwhile if you have a lot of extra time and are extremely bored. If you were to win big at even one of the smaller scratchers, you would definitely turn the tide and make the app extremely profitable.

Plus, the advertisements that seem to pay for it really aren’t even that noticeable. They do occur, but they didn’t really bother me. There seem to be far fewer on this app than I have seen on other apps, which is good.

Did Lucktastic deliver on what is promised to do? Yes. Did I enjoy spending my time this way? No.

Personally, I have a hard time spending 1 year to earn a $50 gift card. I'd rather spend my time learning something interesting, or building my online business bigger to make more money in a more consistent way.

Our Final Thoughts About The Lucktastic App