Can You Make Money With CryptoKitties? 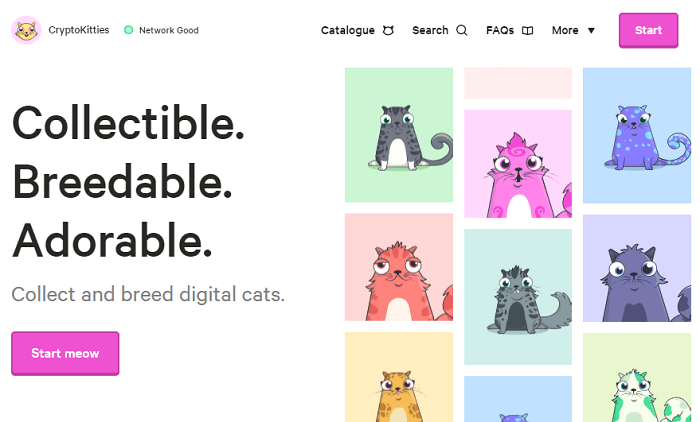 Update Nov 2018: In case you thought this was a fad or dying trend, cryptokitties are still going strong:

If you've been geeking out about the cryptocurrencies like we have for the past year, it's no doubt you would have heard about CryptoKitties. It launched less than a year ago and has swept through the crypto market like crazy. Not only is it a way of trading in the Ethereum market, but it's also a fun game that you can play to increase your crypto holdings.

But can you make money with Crypokitties? Is it hard, how much can you make, and how do you play? Lets take a look at everything CryptoKitties right meow!

The playful little CryptoKitties all center around the Ethereum cryptocurrency. In all reality, this is a game that you can play of buying, breeding, and selling kitties online. While it all revolves around Ethereum as the currency to buy and sell the kitties, it's nothing like trading cryptocurrencies at all.

Everything about the game centers around actual cute digital kitties that you can choose different stats, generations, and features to decide which to breed to make more kitties and which to sell to make a good profit.

Why are CryptoKitties so popular?

Of course the creator of CryptoKitties knew that the world has a soft spot for fluffy kitties ranging from the crazy cat ladies around the world, to the posh designer cats carried around in a hand bag, all the way down to the Hello Kitty toys designed for little girls (or big girls too!). There are many long-running jokes about cats living in the internet, so it seemed an appropriate animal to choose for the game.

But the biggest reason CryptoKitties became so popular is because it was one of the first times someone took a cryptocurrency and turned it into a fun game that you can both play, but also earn high amounts of cash from if you play it the right way. It's one of the first applications of cryptocurrencies that didn't look like stock trading.

Because it is also based on the Ethereum currency, it also gained popularity as Ethereum has evolved over 2018 into what looks like is going to be an evolving cryptocurrency of choice to build many future applications and tools for easy and safe financing around the world.

How do you get signed up for CryptoKitties?

Before you sign up for CryptoKitties, you're going to need a few things.

First you're going to need Ethereum in order to buy the CryptoKitties. If you have a stockpile of Ethereum already, you're good to go. If you dont, you can easily get it by signing up using one of the popular platforms like Coinbase.

If you have Ethereum then you'll still need a “wallet. In this case, we recommend that you install MetaMask, which is a digital wallet which you'll need to play CryptoKitties. To install MetaMask just go to https://www.cryptokitties.co/sign-in and click the “Install MetaMask” link. This will be installed on your browser and you will be given specific “seed words” which are used to recover your account if you forgot your password. Make sure you never lose those seed words because there is absolutely no way of recovering your account without them.

Also, don't store those words on your computer because if malware, viruses, or hackers can steal your information. A pencil and paper is highly recommended for storing your seed.

You'll be prompted to create a new password, make backups of your seed words, enter your email address and after a few more clicks you're good to go!

Once you have an account with Ethereum and MetaMask installed, you're ready to play! Sending Ethereum to your MetaMask is extremely simple if you use Coinbase because they are integrated together – thats why I suggest you use Coinbase for your Ethereum transaction into CryptoKitties.

What are the different types of kitties?

Now that you have your Ethereum loaded into MetaMask you're ready to buy kitties! So as most of us, the first thing you're probably thinking about is what can the kitties do and how can I play with them? Well, it's not a Tamagotchi – it's only role is to breed and sell (Sad kitty…).

In CryptoKitties, your cat will have many different aspects that are important including the Generation and Cooldown which are both very important when picking which kitties to purchase/breed. Here's an overview of what both of these mean:

Both the Generation and Cooldown will impact the price of the kitties when it comes down for you to buy your first one. You'll also find that there are other smaller variations in CryptoKitties like their specific style, the breed of the cat, and if your cat is rare or fancy which affects the price as there are only a limited amount of those that will ever be made.

While I cant fit everything into just one guide, there are so many forums, discords, and blogs about what all the different variations are which you'll have to research to find out exactly which one you want to buy.

How can you earn money with CryptoKitties?

First things first, you have to buy at least one CryptoKitty. Once you have your first one, you're ready to start making money. First, you have to decide if you want to breed it with your own CryptoKitty or with a “sire”. If you choose to Sire, you'll then have to pay 0.3028 Ethereum to have another pet breed with yours. if you choose to go the route of having two kitties and breed them together, then you can move forward much easier.

Before you do start to breed, you'll want to understand what good breeding patterns are. In the beginning people had to figure it out by just randomly breeding CryptoKitties together to see the results. Nowadays, you can do some research to see what are good breeding patterns based on the kitties traits. But today's good kitty-traits thats sell for high on the marketplace, might be the lowest sellers tomorrow. It's always a gamble to know which traits you should breed for.

Earning from your CryptoKitties

There are multiple ways you can earn from your CryptoKitties. Here are the 3 different ways that you can in-game:

How Much Money Can You Earn Breeding & Buying CryptoKitties?

There's no exact number, or average earnings for the game. It's still very new, so there's a lot that's going to shake out in the coming months and years if it manages to stay relevant in a fast-developing ecosystem.

That being said, after doing some research, it's my opinion that in order to make money with CryptoKitties you have to have a substantial initial investment, or get lucky, or both. So far, it doesn't seem like you'll be able to buy some cheap cats and breed your way up to big earnings, or at least it's not that way yet. Perhaps in the future they can randomize profitable traits more effectively or introduce enough gamified elements to allow you to increase the value of your cat.

The best earning strategy right now seem to be just hope that you get a cat with positive traits which can be sired out, or you unintentionally acquire a breed that increases significantly in value.

So is this a great way to “make” money? Not really. So far, it seems kind of random. It's supposed to be fun, with a money element to it, not an investment strategy. If you want to make money with crypto, I'd suggest just picking a few currencies you like and holding them for the next few years.

Better yet, you can start your own cryptocurrency blog and monetize it with ads or Bitcoin affiliate programs. Some even pay in Bitcoin, meaning you can take your earnings and immediately invest them instead of having to withdraw from your bank!

CryptoKitties only started November 2018, so this is a really new online market although in today's world of Cryptocurrencies, getting there first is the biggest way to become a winner. So, is it worth it to get into CryptoKitties?

It is not too late. In fact, right now is a great time to start. As recent as Sept 2018, the Opera browser is adding support for sending/receiving CryptoKitties!

Generation 0 Kitties are still being released until November, 2019 along with many different rare type Kitties. If you haven't gotten involved, it's still not too late. After November, it might be the time that it's a bit late to get involved in CryptoKitties but even as of today CryptoKitties is still a growing fad and people are still buying them like crazy! That being said, I wouldn't invest a ton of money into this venture because I suspect they will go the same route as beanie babies or rare Pepe cards which went out of fashion relatively quickly, leaving a lot of bag holders.

Since this was one of the first really fun uses of Ethereum, and with Ethereum suspect to rise by the end of 2018, it's worthwhile to think about still getting a couple kitties and breeding them to see how you can earn a bit of extra Ethereum on the side.

Let me know if you've had a success story with CryptoKitties (or a crash and burn?).

Sonos Affiliate Program Review
Next Post:How To Pay For A Wedding By Yourself And Not Go Broke