My Nikken Review: Magnets for Health? 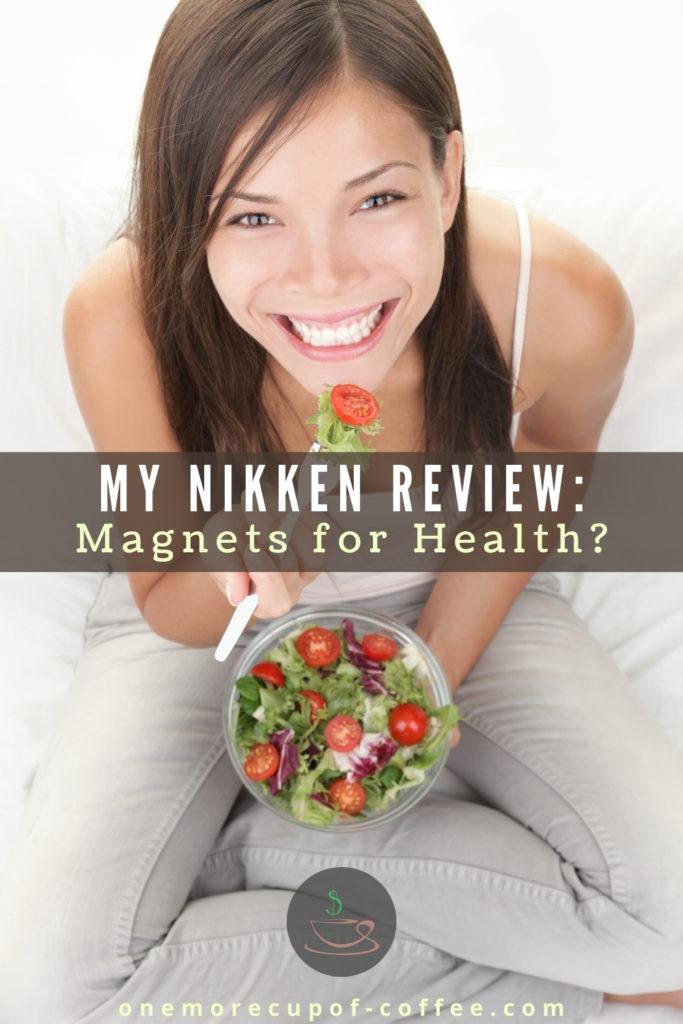 Here we go with yet another health and wellness MLM, although in this case it also has a focus on its own ‘unique’ technology, including the use of magnets. Oh boy. Sounds like fun.

I'm not kidding either. While Nikken has a decent range of products, a surprising number of them are linked to magnets in some way. This creates a fairly new-age alternative health angle.

Some customers are interested in this type of product and buy into the idea that magnets can promote health. Still, the concept does end up sounding gimmicky and it won't convince everyone.

Health and wellness is a different story. This product area never fails to be popular. People are always looking for ways to improve their health, feel better, and perhaps even live longer.

The products in this field tend to be consumable. That's perfect from the sales perspective. It means that if you can get people interested in the products, they'll tend to come back time and time again.

Finally, there's Nikken itself. While the magnet focus is highly controversial, Nikken does have other products too. They have a larger product line than most health MLMs, with much more variety as well.

The end result is similar to most MLMs, Nikken has some good points and some bad ones. With this post, we're taking an in-depth look at the company, so that you have the information you need to decide about it for yourself.

The first thing to mention is how you earn money. This follows a typical structure, where the initial method is earning a commission by selling the products.  Of course, maximizing your income potential will involve working on team building as well.

We're going to look at both of these areas as part of this post, along with how well Nikken works overall as a way to make money.

Nikken offers an interesting range of products. These fall into four categories – Nutrition, Personal Care, Rest and Relaxation, and Environment:

The first two are pretty typical for a health and wellness company, while the others are much less common. Many of the products focus on the idea of magnets and their potential benefits for health. For example, one product is a necklace with magnetic inserts that sells off the site for $135.

The idea that magnets offer health benefits is certainly not new, but it still seems to be doing the rounds. With this company, they never say specifically say that the magnets contribute to health, but it is certainly implied. I mean the company even lists the necklace under the Rest & Relaxation category, which makes no sense for a simple necklace.

It isn’t too surprising that the company chooses not to come out and make the claim, given there have been many lawsuits against companies promoting magnets for health.

Magnet therapy is a suspicious approach. It’s one of those things that people often want to work so much that they convince themselves that it works. For example, this is a review from a customer of the company (although she could well be a distributor too).

Here’s my problem. How would you know? How would you know that the magnets improved circulation or that the immunity capsules actually kept you healthy? As humans, we have a very strong tendency to see exactly what we want to see and that’s especially true for things like magnets that are overhyped.

Likewise, here is another review:

Even the non-magnetic products don’t offer a lot in the way of evidence about their effectiveness. For example, products in the range below boast ‘Far-Infrared Technology’, but don’t offer much information about what this is (beyond playing a role in temperature regulation) or whether the approach is any better than normal wraps.

Reviews for their products are mixed. For example, on Amazon, the company’s Waterfall Gravity Filter Purifier System scored an average of 3.7 out of 5 stars, across 31 different reviews. 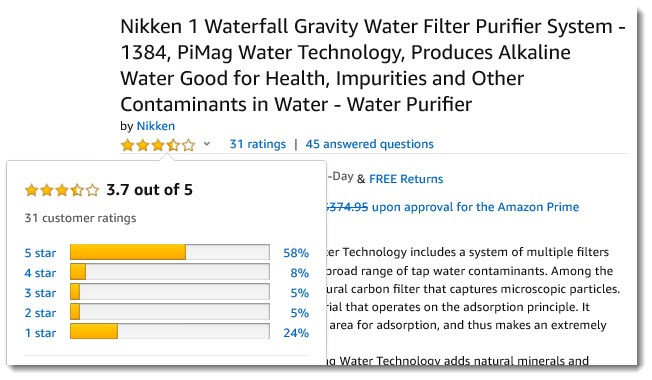 While 3.7 is a pretty good rating overall, the presence of many 5-star ratings and many 1-star ratings is never a good sign. This pattern tends to mean that the product is very hit and miss or that the positive reviewers are highly biased.

It's also worth mentioning that plenty of positive reviews could apply to any water filter out there.

Let's be honest, the water filter is likely to work fine. I'm sure it filters water without any issues. My problem is that Nikken's water filter products are expensive and the marketing implies that they're better than other water filters on the market. There's simply no evidence that this is the case.

The most unusual feature is that, like the company Vollara, Nikken's water purifier alkalizes your water. This is another pseudoscience idea. There is plenty of hype around the idea of alkalizing water, but no evidence that doing so does anything (as our bodies have tight regulation over our own pH levels).

As multiple reviewers for the product point out, there is no real evidence that the filter actually works. Simply put, there are better options out there from more reliable companies. Many of these will cost much less than what Nikken offers.

I know that some people are convinced about Nikken's products. You might think I'm being overly harsh. But, here's the thing…

As a Nikken distributor, you need to get people to buy the products. This means you need to convince them that the products from Nikken are worth the price tag. Could you do that regularly?

Remember, your customers will be actively using these products. If they're not satisfied, that's going to reflect poorly on you. Bad word of mouth could easily decrease your chance of making ongoing sales.

I’ve only looked in-depth at a few of Nikken’s products here, and I’m sure that some of them are better than others. Nevertheless, the majority of the products appear over-hyped and over-priced, with little real evidence that they deliver on their promises.

As with any MLM, I’d recommend being very careful about any product reviews you read as well as anything that distributors from the company claim. Distributors make money from selling so they will often hype up the claims. Other times, they might genuinely believe that the company and its products are fantastic, but that still doesn’t mean they actually are.

So then, let's talk about the income side of things. The first aspect is that you're earning 25% on sales. This isn't an amazing rate for an MLM, but it isn't a horrible starting point either.

There are two ways to make sales, you can buy the products at wholesale and resell them for a profit, or you can make sales through a replicated website. The website approach tends to be more powerful.

After all, Nikken has many different products and some of them are expensive (like the water filters!). Buying and reselling is risky enough with inexpensive products.

The retail profit remains consistent at 25%, even as you increase in ranks through the company. So, this is all you're going to get through personal sales.

That being said, Nikken does also have a Personal Customer Volume Rebate. This rebate mostly applies to team building, although you could theoretically earn it on your own as well. The rebate starts off at 5% and you need to hit 1,500 volume in sales to get it (what this means in dollar value isn't clear).

The rebate might add to your earning potential, but it's hard to be certain. The problem is that Nikken never really explains what the rebate is. You might just be getting credit with the company, which isn't the same as income.

Most income increases from Nikken are strongly linked to the team-building concept. To increase your personal rebate and to have access to other bonuses, you need to move up through the ranks at Nikken.

There are nine ranks to go through, starting from Direct Distributor and ending at Royal Diamond Distributor. In theory, you could get up to the fourth rank without ever recruiting, but you'd need to hit some pretty high sales targets. 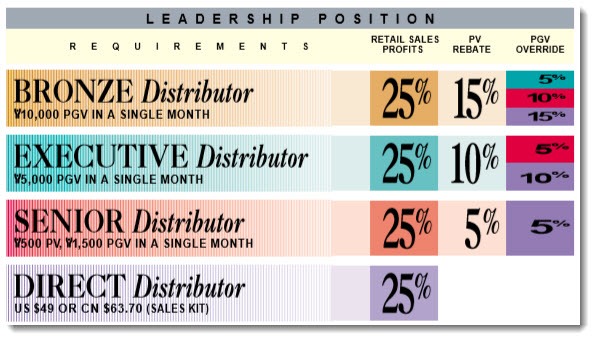 As you can see, the bonuses increase with the ranks. The same pattern continues with the higher ranks too. 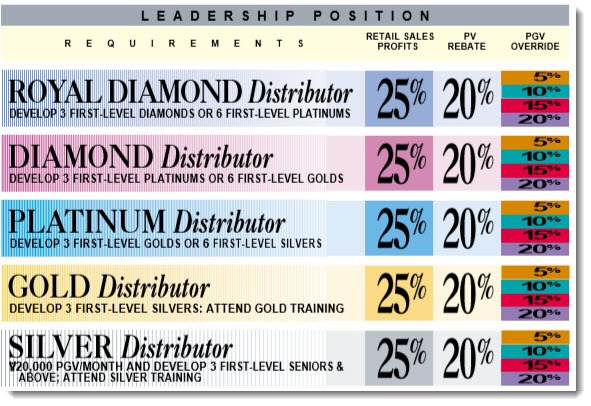 Of course, as the image shows, the requirements increase along with the ranks. For Nikken, you don't just need to recruit others, you need them to hit certain ranks. To hit the Gold rank, you need three people who you personally recruited to hit silver.

This type of requirement is tough. You can't force people to be successful in business. Some people won't have the time or motivation to make regular sales. Others might simply have no sales skills.

The silver and gold ranks also require you to attend training. While this might sound like a good idea, such training events tend to focus more on hype than education. Plus, they might be in another part of the country. You're responsible for finding the time and money to attend.

There is also an additional set of bonuses for people in the high ranks. They look like this: 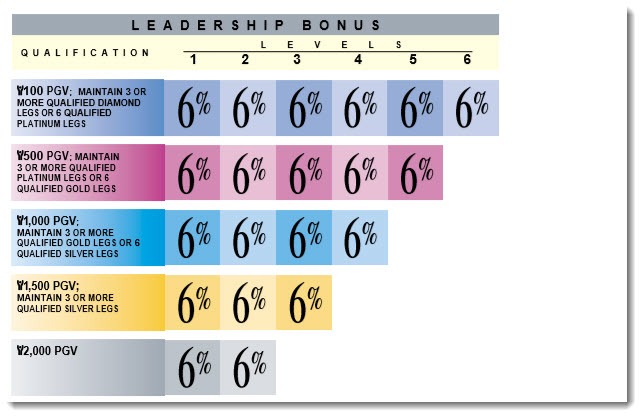 The bonuses are impressive, but the requirements to hit them are pretty high. You can't even access them until you're at the silver rank. Needless to say, most Nikken reps aren't ever going to see these bonuses.

Can You Generate Reliable Income With Nikken?

Despite the complex compensation plan, it is possible to make a reliable income with Nikken. To do so, you'd want to be making consistent sales, ideally through the replicated site. While there is more income potential by building a team as well, be aware that the team aspect involves much more time and effort than it might seem to at first. Still, whether or not you can earn isn't the main question. You can earn from pretty much any MLM, even the ones that are basically scams. It's important to consider whether making money is realistic for you.  The simple truth is that most MLM members don't break even, let alone turn a profit. The model is a frustrating way to make money, as you're dealing with a complex compensation plan and you're mostly making sales to people that you know.  Do you want to be that person? The one who is trying to convince people about the amazing benefits of some random product? Even if you're completely convinced about alkaline water and magnets for health, many people in your social circle won't be. All-in-all, Nikken ends up being a pretty stressful way to make money.

User Rating: Be the first one !