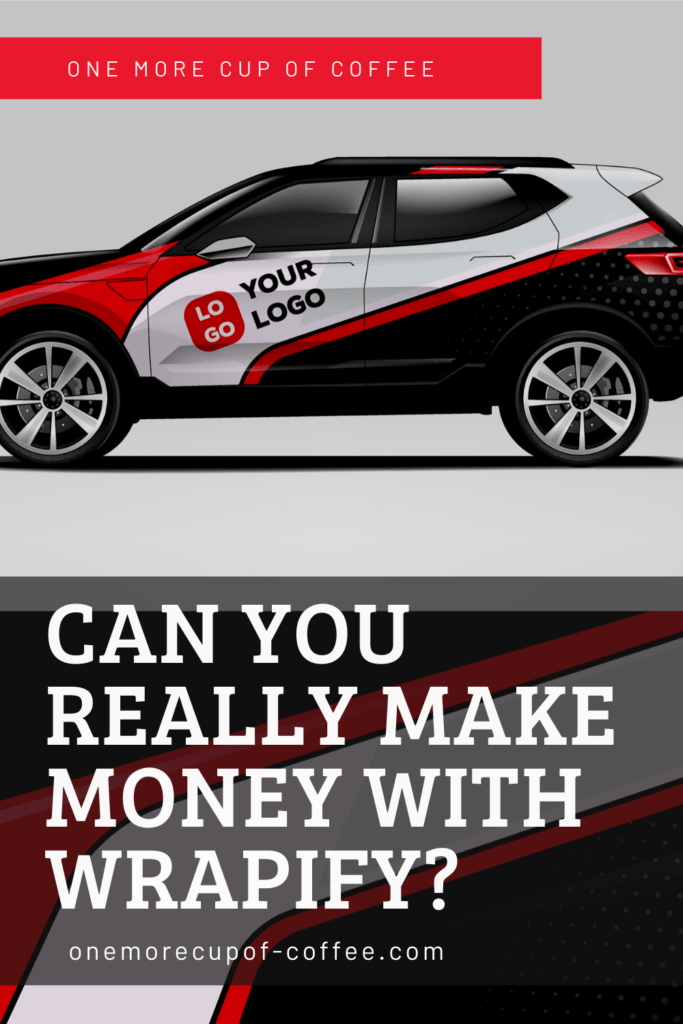 This company will pay you to drive around with advertisements on your car! Yes, it may sound like a crazy idea… but is it a real thing? Can you really make money with Wrapify.com?

I am all about side hustles! One of my favorite things to do is to explore new ways to earn money on the side.

Why Make Money With Wrapify.com?

Lately I have been looking into different ways to earn money with a car. As most of you are probably aware, a car is one of the more expensive purchases that most people make.

But unfortunately, in most cases, cars are actually financial liabilities. They are liabilities because you are paying for the convenience of having them. Other than getting to and from work with them, they really only drain your bank account.

They cost you money… they do not earn you money. This is especially true if you take out a loan to buy a car. You are also paying interest on that car loan, which is costing you even more than the list price of the vehicle!

And that is a problem. I feel like a car should be an investment… that is, something that earns you money instead of costing you money. Why not make one of the most expensive purchases of your lifetime an asset instead of a liability?

One great company that could let you do that is Uber (or Lyft). But the only problem with these types of options is that these companies both require you to work for the money your car would earn you. For me, the golden opportunity would be something passive.

For those of you who don't know, passive income is basically income that you set up and step away from. It earns you money without you having to directly spend your time on it.

That led me to thinking… what if you put advertising on your car as a way to earn passive income? If you have a long commute, a lot of people will see your car. Why not sell advertising space on it?

This idea led to me doing some Google searches… which eventually led to me finding some websites that do exactly that… sell advertising space on cars!

And that is what led me to Wrapify.com. 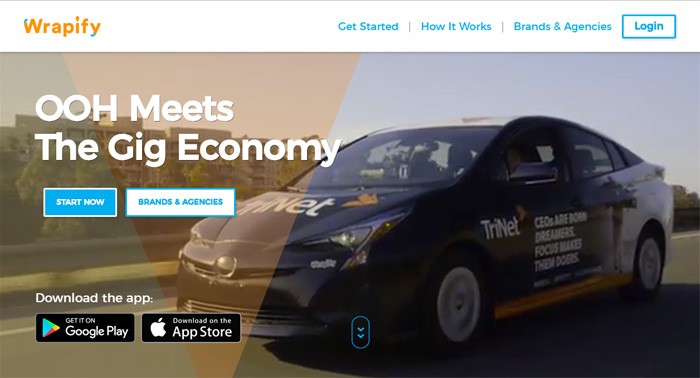 What Is Wrapify.com & How Does Wrapify Work?

As long as you qualify for the campaign, you can be chosen and your car will be wrapped with like a plastic-like covering that will have advertisements on it.

Then, you drive around with the app on, and earn money while you drive. You can make hundreds of dollars per month, according to the website—and when the campaign is over, the wrapping comes right off, and you are good to go.

Wrapify is all about converting your car from a liability to an asset!

This is an awesome idea for people who have to drive a lot. If you are going to be driving a lot anyway, doesn’t it make sense to earn money while you do it?

Of course, one obvious downside to this is that your car, which you paid good money for, would be covered with advertisements instead of looking like the usual pretty color it came with—but then again, this is a temporary thing. Once the advertiser is done with their campaign, you can have the wrap removed and your car will be as it was before!

How Much Does Wrapify Pay Per Mile?

There is no set amount which is paid per mile for Wrapify users. Companies are able to set up their own campaigns and set prices based on their own budget. Prices are set per mile, and usually have a “cap” on how many miles are paid per day.

For example, in the video embedded on this page (keep reading!), the person who tested Wrapify for 4500 miles was making about $40/week, or $160/month. This was based on a Pluto TV campaign in San Diego. Which offers you get will depend on your location and who is bidding to have drivers advertise for their business.

Overall, you won't be able to pay the rent with this type of income, but if you have a daily commute to work in a city with frequent Wrapify offers, you could make an extra hundred dollars or so per month. Keep in mind, you won't see these rates, or maybe even see any offers in rural areas. Fewer eyeballs means lower pay! 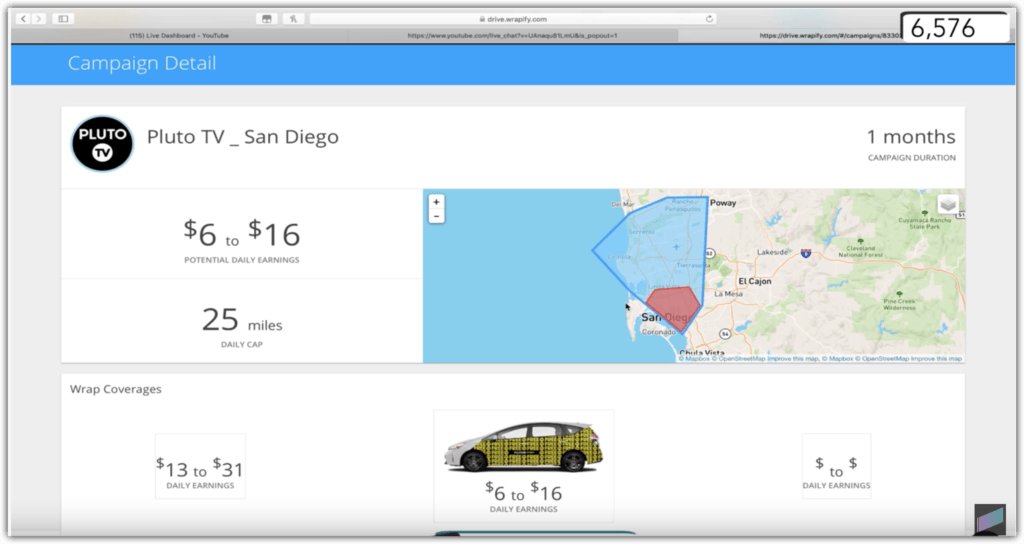 Yes, Wrapify is legit. People are getting paid. Most of the complaints are about the app not working correctly. There were no complaints I could find about getting ripped off. Plus, it's nice to see that Wrapify is engaging with their community! This goes a long way to show the legitimacy of a company.

The Problems With The Wrapify App 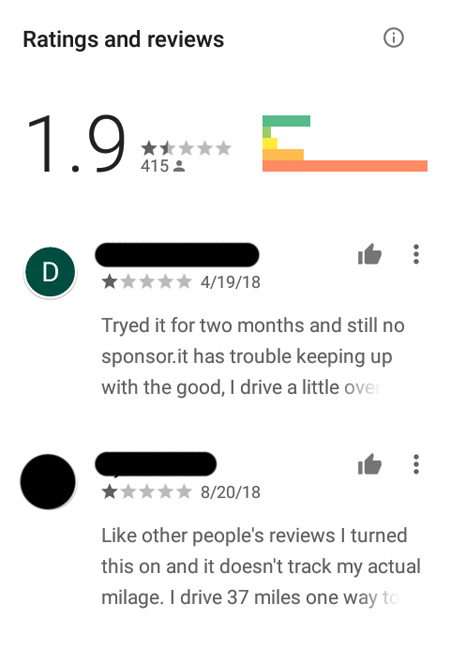 As you can see, the ratings were pretty stacked toward the bad end. There are also a couple of examples here of reviews that people left, and these reviews actually mirror a lot of the opinions that people have shared about the app.

Apparently, there are more than a few problems. First of all, a lot of people claim that the app doesn’t track mileage correctly.

To understand why this is important, one first needs to understand how this entire process works. To get started with Wrapify.com, you are supposed to download the app, open it, and drive around with it tracking your mileage.

Then, supposedly, based on your mileage, you may eventually get contacted by the company with a campaign offer. That is supposed to be how it works.

But according to the reviews on the app, the app doesn’t track mileage very accurately. Some even say that it barely works at all.

On top of this, many people say that campaigns are not ever available… which is the second biggest complaint about the app. Some people said that they drive a lot of miles in prime areas, but that they never get offered a campaign… making the entire idea a waste of time for the vast majority of users.

Personally, I downloaded the app, tried it out, and actually had a different issue altogether. Check this out! 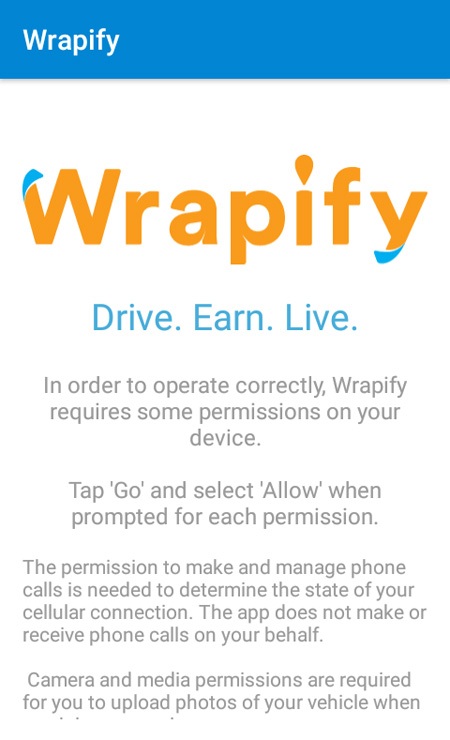 This was the first screen I saw when I opened up the app—but it immediately froze here. I couldn’t scroll, I couldn’t push any buttons… I couldn’t do anything. I even tried to back up, but ended up just having to close the app to even get out of it.

So yeah. I really had high hopes for this one, but so far it just wasn’t turning out very well. You can also see how there are far more 1 star reviews than 5 star reviews on it in the Google Play store… and that definitely doesn’t bode well.

I feel like this idea is a very valid one, but I also feel like it just isn’t being implemented very well in this case.

The company has a really nice website. They also do a really good job of branding their service. But I did find this while browsing. It seems to be a map of where their biggest campaigns are focused. 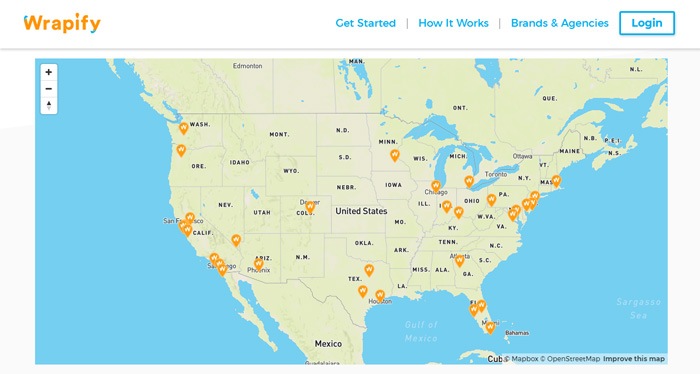 As I kind of suspected, my area seemed to be less than ideal for trying to make something like this work. But even so—the app really wasn’t working for me anyway, and I was pretty much to a point where I didn’t feel like it was really worth it to keep trying.

I'm just a guy looking at this stuff. Personally, I wouldn't do this to my own car, so let's investigate what some honest Wrapify reviews are saying.

There aren't many reviews on the BBB, but of the ones which are there, they are very mixed. Either 5-star or 1-star. The 1-star reviews are from several years before, and mostly complained that the app didn't track mileage correctly. The newer reviews are better, so perhaps they fixed the issue with the app! 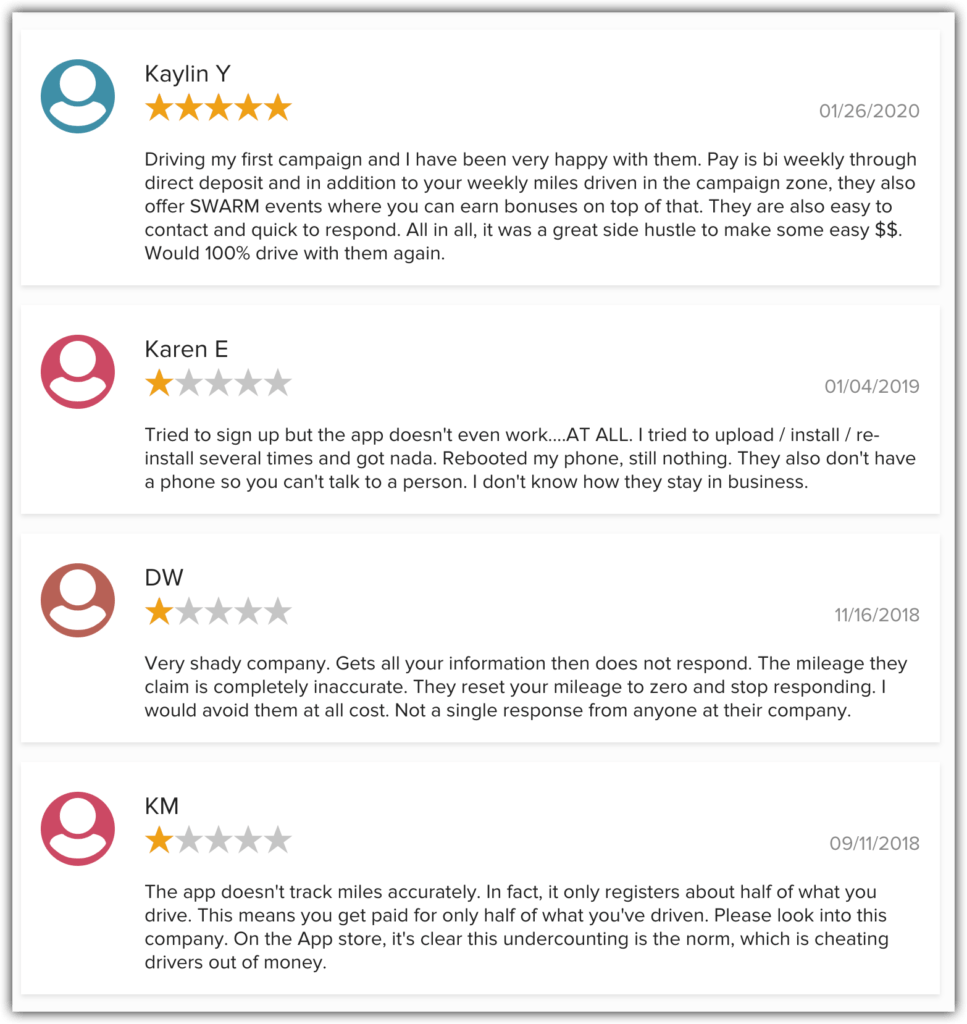 Wrapify Review From A Real User

Here's a short blog series about one user's personal experience with Wrapify. Though details were sparse, there are some cool pictures to see what Wrapify looks like in action! The wrap went on, and he made money, but it was less than he thought. There were difficulties getting the full wrap so this user ended only making a part of the income advertised.

Is Wrapify Worth It?

Personally, I think that this is a super-good idea, and I really wished that the concept would have worked a bit better for me. How much you can make with wrapify depends on where you are and the selection of advertisers available, but it's a decent side hustle which doesn't take much effort on your part. It's pretty much passive income!

Unfortunately, I didn't have any offers in my area, but I do understand that this type of thing is just going to work better in a high-traffic city.

Most of their clients are probably going to be more interested in getting advertisements set up in areas like Los Angeles, New York, etc… places where there are a lot of people condensed into a smaller space.

I live in a pretty rural area, not far from a town that is not even that big… so even in the best case scenario, I am probably looking at a situation where I am not going to be able to use this app solely based on where I live.

I also feel like the app itself obviously has some issues. With so many negative reviews, it stands to reason that the company could probably do a lot better if they worked on that a little bit. Maybe the Apple app is better than the Android app. But at this point, I was pretty doubtful of that.

Maybe in the future this service will be able to realize its full potential. I do, after all, feel like the idea is quite valid. If they fixed the app and found more clients, it seems like it would work a lot better.

I would absolutely go for this if it worked in my area. But as it stands now, I don’t think that it’s really going to do me a lot of good.

Our Final Opinion About Wrapify.com

Should you download the app and try to make some money by putting advertisements on your car?