Can You Really Make Money With Makeup Eraser? 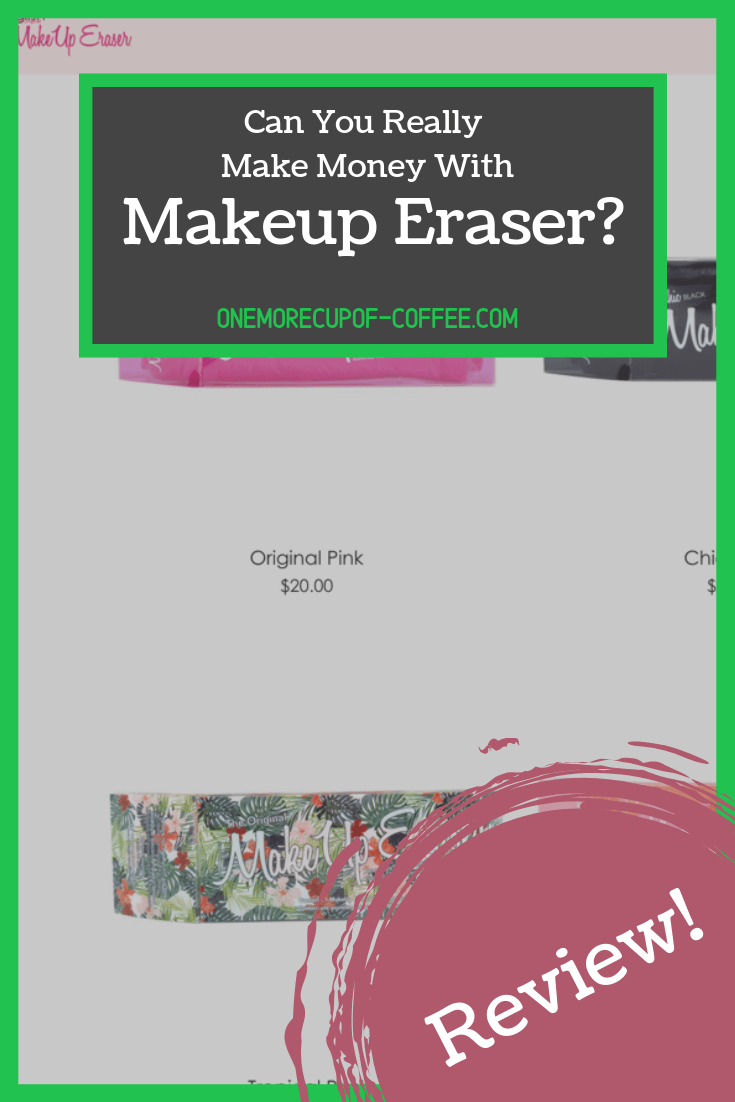 The idea of taking off makeup without chemicals is a good one and it is sellable. However, reviews for the products are mixed, suggesting that it isn’t even that good at doing what it claims to. Combined with the fact that the company only offers two products to sell (and one is just a travel case), getting the sales and profit from the MLM would be pretty challenging.

Makeup Eraser is a very simplistic MLM. The company simply offers two products. The first is the makeup eraser, which is a cloth that does exactly as the name suggests. The other product that the company offers is simply a travel case.

The key selling point with the product is that it is reusable, so it works out less expensive that people buying product to remove makeup over and over again. Strangely, the company doesn’t actually give any information about what makes the cloth special and the description doesn’t sound any different than a normal washcloth.

Some information suggests that the cloth works because it is a blend of polyester, but for the most part, what the cloth is specifically made of seems to be a trade secret.

The entire business is based around this cloth, so the real question is whether it actually works.

As is often the case, the internet is flooded with positive reviews of the product – often from people who are actually promoting it. I did find some negative reviews too though.

A number of people comment that the eraser does remove makeup, but only with a lot of scrubbing, which can be damaging to the skin.

Other people commented that the eraser did get some of their makeup off, but not all of it.

It’s possible that the product works for some people and some types of makeup, but not for others. There are enough negative reviews out there for me to be hesitant about the product.

It might be a good solution for people who want to avoid using chemicals to take off their makeup, but for others it doesn’t seem to be that good. As multiple reviewers for the product noted, getting a baby cloth and makeup remover is more effective and cheaper than trying the Makeup Eraser.

The product also isn’t that unique. There are other companies that also promote cloths that can help with makeup removal.

The opportunity for Makeup Eraser is relatively simple compared to many other MLMs.

At the base level, distributors earn the difference between the bulk price of the product and the price that they actually sell it for. The company isn’t clear about what the bulk price is, so you don’t know your potential to make money until after you sign up. This approach also involves you buying the product first and then selling it, which can get expensive.

To remain active with the company, distributors have to have an autoship in place of at least six erasers. Autoship is a frustrating concept, and again, it can get expensive. An autoship of six would mean that every month you pay for and receive six of the erasers automatically, regardless of whether you have sold the previous ones or not.

This really means that you have to be selling at least six of the erasers each month just for the privilege to earn money. This might be easy at first, but once most of the people you know actually have one, it gets increasingly difficult to make sales.

Another part of the opportunity is that distributor can earn a commission of 20% by getting retail stores or salons to carry the product. In this case, the store or salon orders from the company not the distributor. However, the challenge of getting this set up can be quite significant.

The final approach, and the key one for money making, is recruitment.

This part of MLMs always seems the most appealing to potential members. After all, it basically means that you are earning money without doing any work. It doesn’t tend to work out as well in practice though, because most of the people distributors recruit probably won’t end up being effective sellers or recruiters. You have to have very strong leadership qualities to lead a team of effective sellers.

Additionally, if you recruited a person from your social circle and they recruited from a similar social circle (which is easily done), then there is a lot of competition between members of your team and not much profit for anyone.

A lot of companies and products promote the idea that they have been featured on television and on popular shows. Most of the time this is just marketing hype and isn’t true at all. In the case of Makeup Eraser, it actually is true and stations like Fox News have covered the product.

One plus about this particular company is that it has been shown in locations like this, and there is a decent amount of hype surrounding it. This can help a bit with actually selling the product, but it only goes so far.

The Challenges of Selling

Selling physical products can be a challenging task to start off with. People have so many options for how they buy products and there are so many different types of products out there.

This means that right from the start, you face a whole lot of competition. You also face competition from other distributors and from the company itself – because people can buy the product from the official site. The product is also very common on Amazon.

It’s also a reusable product, so people aren’t likely to need more than one at a time. I don't mean to say that you can't sell this. Any business will be a challenge to get off the ground. But you need to consider how much effort it's going to take you to do this, because ‘starting a business' isn't as easy as selling one product.

With most MLMs, you can potentially find some customers that will order multiple times. This reduces how aggressive you need to be in finding new customers. You don’t have this advantage with Makeup Eraser.

Instead, you have to find new customers much more frequently. This can be a challenging task, especially if your social circles aren’t that wide.

With this company, you do get a website that you can sell products through. However, the site is the same for all affiliates, and it's unclear how much customization is possible. I am also unsure if there is any online marketing training for distributors.

Makeup Eraser is relatively simple as a MLM, both in terms of the commission structure and the fact that it only has one product. Additionally, reviews of the product itself suggest that it may work for some people and not others. On the opportunity side of things, I think it's alright, and I don't have any major criticisms. My main issue is the long term marketability of this particular product. Selling a wash cloth for makeup just doesn't seem appealing to me.

If I were to promote this product, it would be one of many things I promote on a beauty blog, not just selling a single product on Facebook and being “the MLM friend” that everyone avoids.

Makeup Eraser is another company in a long list of MLMs out there. The marketing and commission schemes for MLMs make them sound very effective as an approach for making money, but they completely underestimate the challenges involved.

Theoretically it is possible to make money through a MLM and some people do, but the structure of the businesses don’t make it easy. You rely on other people's work a lot, and have to spend time motivating them instead of yourself. Plus, it is very easy to end up spending far more with a MLM than you ever make back.

Affiliate marketing is another story.

It is an approach that lets you sell via the internet, rather than in person, and you don’t have to manage any physical stock at all. You also don’t have to deal with complicated commission schemes, uplines and downlines, or any other MLM nonsense.