Yes, Bing… as in the search engine. Did you know that they offer a rewards program where they will literally pay you to use it?

I didn’t… until just recently. So naturally, I had to check it out. Can you really make money using Bing? Let’s find out.

For those of you who don’t know, Bing is a web search engine that is owned and operated by Microsoft. Yes, Bing is kind of like Microsoft’s competitor to Google… kind of. But the two search engines are still actually quite different.

So with that being said, I headed over to Bing. I don’t use it very often, honestly. When I bought my new HP laptop, I think that Bing was the default search engine that popped up—but I promptly changed this to Google. I have always used Google.

But… while Google is awesome, it has also never paid me for my web searches!

I was surprised that I never noticed it, but yes… at the top right corner of the Bing landing screen, there was a little ‘Rewards’ ribbon. Take a look.

I clicked on the ribbon, and this popped up. 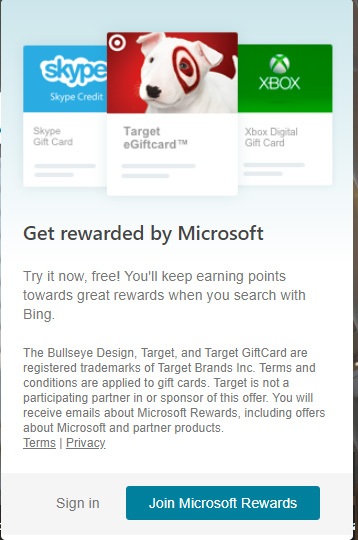 But this was already getting a little weird. So there are gift cards at the top, which is pretty cool. It makes it look like you can earn Skype, Target, and/or XBOX gift cards, right? That’s cool.

But then, when you scroll down a bit, it says that you can ‘try it now for free.’ This was strange to me. Does the loyalty program cost you something after a while? Why are they making a point to say that you can try it for free?

Also, they say down below this that basically says that Target does not participate in the rewards program! So… does that mean that you can’t get a Target card? Or does that just mean that Bing buys them and gives them out as rewards?

This was already getting really convoluted, and it was already, in typical big-corp style, making things way more complicated than they probably needed to be. But, I try to stay understanding about such things.

At the bottom of this little popup, there was a place where I could either sign in or join the rewards program. Obviously, I decided to join… as I didn’t have a membership yet.

I was still really interested in seeing how much I could earn using this. In my mind, the best-case-scenario would be that I could use Bing for all of my research instead of Google, and rack up some pretty awesome reward points at the same time… making the endeavor a worthwhile side hustle, or at least a source of extra spending money/gift cards.

But at the same time, I am a pretty devoted fan of Google. It has never really done me wrong… so I was very interested in seeing if Bing was going to be worth it.

Upon trying to ‘Join’ the rewards program, I was prompted to sign into my Microsoft Account. Now, I have not used this account in ages, but I used to have one… so I tried to recover my old one.

This worked pretty well, though it did take a bit of time. I had to reset my password, get a code and put it in, verify my account with another code, refuse a smart-phone thing that would have given me added security… etc.

But eventually, I just went ahead and signed into Bing… though once again, I was prompted to give Microsoft more information about myself before I did! I had to supply my name, which wasn’t a huge deal… but I was legitimately beginning to get tired of this process. 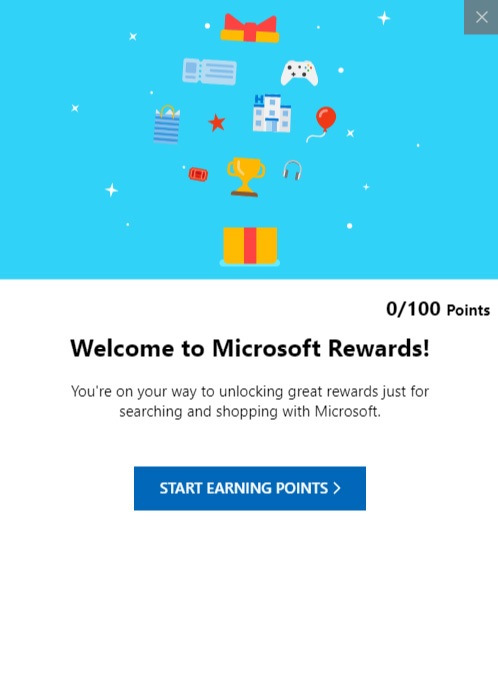 Ok, so Bing Rewards are one and the same with Microsoft Rewards, which is totally fine… but I didn’t know that before.

I moved along in the process… and came to a page where Microsoft wanted me to GUESS how many points a search was worth! 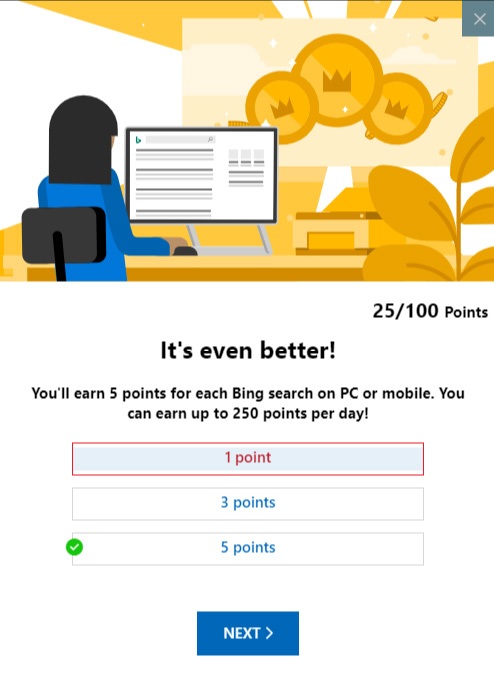 But alas… Microsoft would continue to make this process a ‘fun guessing game’ by asking me a number of questions, asking me to guess the answer, and then just telling me the answer anyway. It didn’t take very long—but wow was it weirdly frustrating.

Eventually I got to a point where they said it was time to set a redemption goal. The options were…

I chose the Microsoft Gift Card, and was then taken to my ‘account’ page. Here, I was greeted with all kinds of information about my account, as well as information about how to earn more points. You can earn them by taking surveys, playing games, and doing other things.

But what surprised me the most was how many points it would take to earn my $5 gift card. Take a look. 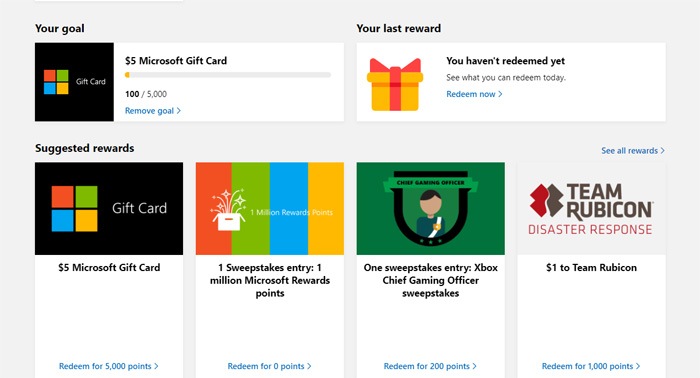 As you can see here, I had already earned 100 points… but that was kind of a special thing as I was just setting up my account. I now needed to earn 4,900 more of them to qualify for my gift card worth $5… so I decided to do some math to break this down.

You earn 5 points for every Bing search you make… at least, that is how I understood it. You can also earn points by doing other things… but the whole idea behind this, for me, was to passively earn points while I browse the internet and do my research.

But how many times do I search the internet every day?

This was the next question that I had on my mind, so I did some research.

How Many Web Searches Do We Do Every Day?

First of all, I tested to see if conducting a search in Bing really increased my points. And it did… just like it was supposed to. My point total when from 100 to 105 after the first search. So far, so good.

But now I had some math to do. I did some figuring and looked at my browser history, and added up some numbers, then averaged them out… and came to figure out that, roughly, on any given day, I do about twenty internet searches. I may do more or less some days, depending on what exactly I happen to be doing.

But that is about how often I use the search engines.

The main upside to this is that it would not really cost me any time. The only thing I would be giving up was Google.

Yes, I would personally rather use Google than Microsoft Bing. But then again, for a $5 Microsoft card, I might be willing to make the switch.

My Personal Feelings About Earning Money Through Bing

This research pretty well told me what I expected. This is by no means a side-hustle—but it is worthwhile to sign up if you already use Bing, and it may even be worth it to switch over if you don’t mind giving up your existing search engine.

For the vast majority of people, that would be Google… but believe it or not, there are still search engines out there other than Google that are more popular than Bing.

So yeah. This will not earn you enough money to qualify as a real side hustle unless you are REALLY putting in some crazy search times. And even then, you are limited to 250 points per day. This kind of renders the entire thing a bit disappointing.

But… it is still free money for something you would already be doing anyway—and that is pretty awesome.

I may give this one a try and see what I think of Bing. It would be weird to use something other than Google. But then again, I am willing to do a lot of weird things for free cash!

Our Final Opinion About Using Bing

Should you sign up for Microsoft Rewards and start making money with Bing.com?