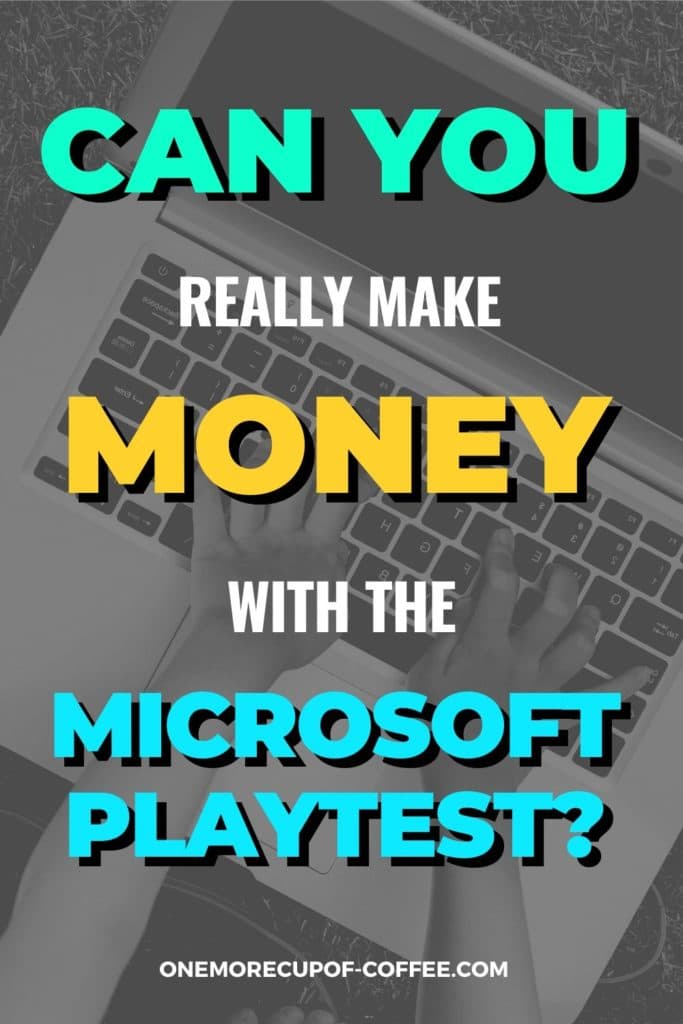 If you love video games, then this might be the perfect opportunity for you. But can you really make money with the Microsoft Playtest site?

This site, a subset of the Microsoft.com website (found at Microsoft.com/playtest), says that it will match gamers with upcoming studies that are relevant to them, and reward them for giving their opinion!

The site also says that it will allow you to play free games, give opinions, and get free software.

I actually heard of this site from a friend who was using it, and he told me that it was pretty cool. So I was intrigued and decided to try it out for myself. I have always considered myself a gamer at heart, so this kind of site really does appeal to me.

But are the rewards worth the effort? Here is what you need to know.

I always begin any review by taking a look at the site itself. In this case, when I scrolled down, I came to the following part of the landing page. 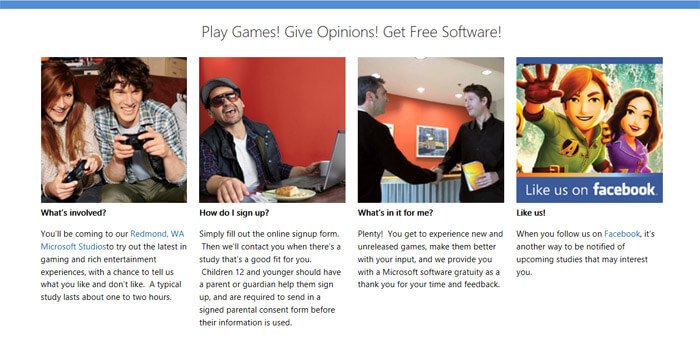 There was a lot of good information here to help describe how the site works. But, I was quickly surprised to see this.

“You’ll be coming to our Redmond, WA Microsoft Studios to try out the latest in gaming and rich entertainment experiences, with a chance to tell us what you like and don’t like.  A typical study lasts about one to two hours.”

Did this mean that you couldn’t technically make use of the site unless you were willing to drive to Washington?

Further along on this landing page, they also say this.

“You get to experience new and unreleased games, make them better with your input, and we provide you with a Microsoft software gratuity as a thank you for your time and feedback.”

It would appear that your payment for taking part in these surveys and studies is a Microsoft software gratuity—which isn’t necessarily the most ideal option if you are looking to make cash… but it can certainly be worth your time if you are into gaming and other software-related things.

But I was still interested in how difficult it was to get signed up. I also wanted to find out if you could actually use the site from your computer, or if you had to literally travel to make use of it.

Here is what I found out about these things.

Signing Up For Microsoft Playtest

I visited the FAQ section of the Microsoft Playtest website and found some pretty good information to help me answer my questions.

First of all, I found the link for signing up for the site. So I will talk about that first.

I followed the link and was taken to a page that was pretty much asking me if I was signing myself up or a child that I am responsible for. It also asked me for my birthdate.

It appeared that I was stuck here, for some reason. So I decided to forgo this and to look more into the surveys and studies themselves. Can you actually make use of this site if you are not planning on traveling to the actual test studio?

Can You Use This Site From Home?

The more I looked around, the more I realized that the entire point of this site was to sign people up for studies that were supposed to take place at the testing studio.

But, this is not necessarily the only way they playtest. They do have tests that you can take part in from other parts of the world. These just seem to be in the minority.

Under the ‘Directions’ tab, you can find very detailed directions to the testing studio, which is located in Redmond, Washington. The studios are also accessible by bus for people who do not necessarily want to drive all the way there… so that is a good thing.

As for how you enroll in the program, that part was pretty simple. You sign up online (which I tried to do, but was unable to). And then, supposedly, the company contacts you when there is a test that you could be a good match for.

There is some type of phone interview before each test, where they talk to candidates in an attempt to choose the perfect matches for their studies… and then they choose their candidates from this pool, using some sort of criteria that I am not totally sure about.

I also learned that you do not have to own a console, or even a PC, to test video games in these studios. You can also take part in game studies once every two months.

This tells me, right off the bat, that this is probably not going to be a service that is going to make you a ton of cash for buying new software—as there is a cap on how much involvement you can have.

But it is still a cool setup—and one that could be great for meeting new people, taking part in new projects, and earning some extra cash toward new games or software.

But… further down in the FAQ section, I also found that they do not just test in the Seattle area. This was not elaborated on, to great detail, in the FAQ… but it did get a mention. So that is a positive upside for me.

I also realized that, from the sound of it, one or more ‘gratuity items’ are offered for payment whenever you take part in a study… so you choose one and they send it to you. You do not get just cash toward software—you actually get payment in the form of some kind of merchandise.

So this is nice, but not necessarily what I am looking for in terms of a side-hustle.

Will I Be Using Microsoft Playtest In The Future?

After conducting my research, I was pretty sure that Microsoft Playtest was not going to be for me. But, it did have its upsides.

The biggest difference between this site and a lot of other survey sites that I have looked at is that, for the most part, the tests conducted by this site all take place at a specific location, at a specific time (the game-test studios in Washington). So if you do not live nearby, it will be a bit difficult to justify making the trek.

Traveling to the tests would cost you money and time, and though you do get a ‘gratuity item’ for taking part in the surveys, it seems difficult to justify spending the resources to take part in it unless you really do live close-by.

But on the other hand, I like this idea because it is so different. It would also give you opportunities to take part in game tests for games that have not come out yet, which any gamer would probably enjoy. Plus, to be able to say that you helped to test a game, later on, would be pretty awesome.

I mean, as a novelty experience for a gamer, this would probably be a lot of fun. It would almost be like a vacation item, really… rather than a work-related experience.

The fact that you can only take part in 1 survey every 2 months keeps it from being a serious long-term money-making opportunity. Plus, there is the fact that you get paid in gratuity items—not cash.

But on the flip side, there are also tests that you can take part in without traveling to the studios. These just seem a bit on the rare side, and I honestly am not sure what to expect with these, as this was not discussed much on the Playtest site.

Let’s also not forget the glitchiness that I experienced when I was trying to log onto this site. I mean, I am not necessarily saying that everyone is going to experience this.

There is no way of knowing for sure if this was something just limited to my experience, or whether it was something that a lot of people have trouble with—but it was still a thing that kept me from joining up the first time I tried it (at least)… so that is something to take into account.

All things considered, this is a pretty cool deal—though maybe not a side-hustle-worthy one.

Our Final Thoughts About The Microsoft Playtest Site

Should you sign up and use it to make extra money?