Can You Really Make Money With AppCoiner?

This website/app claims to pay you to be an ‘app tester.’ They even say that you can earn up to $50 an hour on the site! But is it true? Can you really make money with AppCoiner?

I’ve reviewed my fair share of website and app-testing platforms. And generally, they are either difficult to get into, difficult to find work in, or simply don’t pay enough to make them worth the time.

And some of them even turn out to be little better than glorified scams!

But what AppCoiner? They've been making a bit of a buzz lately. Are they any better?

I was turned on to this platform by a friend who sent me a link to it via email. I was curious, so I took a look at it. Needless to say, I was immediately interested in its potential as a side-hustle, so I decided to dig a bit deeper to see if there was any true potential in it.

Here’s what I learned about AppCoiner, the way that it works and whether it could make a good side-hustle.

The Basics: What Exactly Is AppCoiner?

AppCoiner is essentially an ‘app testing’ platform where you get paid to test and review apps. But unlike other app testing platforms I’ve looked at, this one takes a unique approach in that they want you to supply an actual ‘written review’ of your app-testing experience.

This intrigued me, so I decided to see how much they pay, and what all exactly is required to actually make money while pursuing this app-testing experience.

On the landing page at https://appcoiner.com/home-mobile/, you can find this infographic, which does a pretty good job of explaining exactly how the system works. 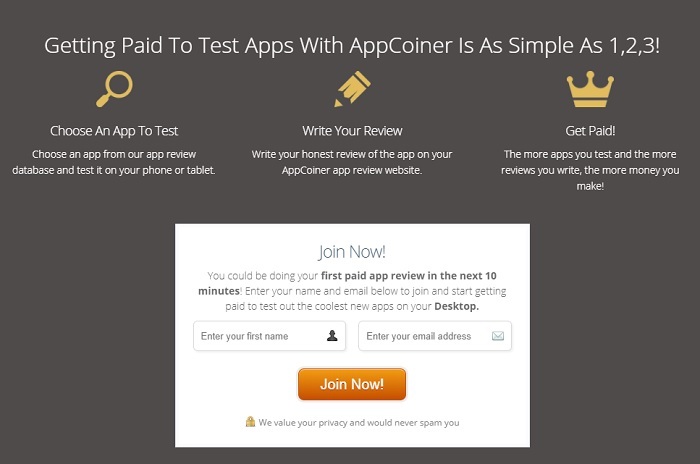 Let’s talk about that next.

This process can essentially be broken down into three steps.

This step is pretty simple. You just review their app database, choose one, and test it on your phone or tablet.

You write an honest review of the app on the official AppCoiner website.

Apparently, according to the website, the more apps you test and the more reviews you write, the more money you can make. Something similar is true for many other testing-based approaches, like website testing.

There was also a button at the bottom of the page that said this.

“Join Now! You could be doing your first paid app review in the next 10 minutes! Enter your name and email below to join and start getting paid to test out the coolest new apps on your Desktop.”

They also say, below this, that they “value your privacy and would never spam you.”

Interestingly, there was nothing on this page to indicate how much a person could actually make writing reviews, so I felt that this question deserved a bit of digging as well.

How Much Can You Earn With AppCoiner?

One thing that I quickly noticed was that you actually have to pay a fee to join the site. 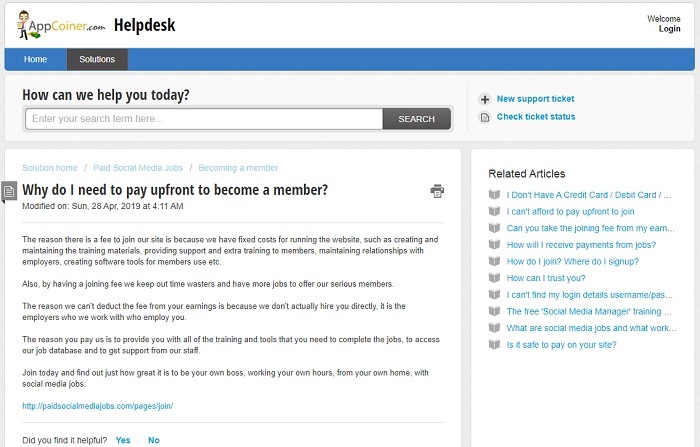 They don’t tell you how much the fees are right away (I found this out by doing a bit of digging) but they do say that the reason for their fees is to help cover the cost of running the website. They also say that they want to make sure that all of their participants are actually serious about the job.

At this point, I was definitely smelling a rat.

It is pretty much a cardinal rule that any website that charges you money to put you to work for them is going to be bad news… and I was definitely getting this vibe from AppCoiner.

As for how much you can make, they say that most of their jobs pay between $10 and $50 an hour.

They also say that many of the people who work on their site now make a full time living on it!

Of course, this was offered with no documentation or proof. So, they are processing so much money that people are earning full time jobs… and yet, they still want you to pay to join the site?

Seems kind of sketchy, to be honest. Even the major freelancing sites like Upwork do not outright charge you a fee to get started.

How Much Does It Cost To Join AppCoiner?

It costs $27 to join the site. They say that this gives you access to training materials, special tools and resources, and ‘unlimited jobs’ from their database and job marketplace.

Of course, this made me wonder… how ‘regular’ is the work in their database? Can you always find work, or is there sometimes a ‘lack’ of jobs?

I am not sure what the answer to this question was, because it wasn’t listed anywhere.

I am usually pretty apprehensive about ‘pay to earn’ sites like this… and for good reason.

Generally speaking, any company that wants you to pay them so that you can work for them is either…

It is easy to see why companies that fit this description would want you to pay upfront. They know that you are not guaranteed to stick around when you find out how the process is not as advertised… and when you leave, they aren’t going to make any money off of your visit.

So instead, they lure you in with the promise of earnings, get your payment, and then give you access to their systems.

This way, even if you leave, you will still have paid the money for signing up… so at least the company made something off of you.

I am not necessarily saying that AppCoiner works like this. But I am also saying that they weren’t really selling me on it as of yet.

I will also say that I noticed some other things that bothered me. There was some weird grammar on their site… almost like the copywriters were not native-English speakers.

I also felt like the general design of the site was ‘seedy.’ It felt like a payday loan store.

This could have been designed to look like a fancy tech company site.

So why wasn't it?

Despite my efforts, I just wasn’t finding anything about this particular site that really impressed me. I thought about signing up with the $27 just to see if you could actually make money, but I opted not to.

I was 100% convinced that it was going to end up being a waste.

I Did Some More Research. As Turns Out, AppCoiner Is Pretty Shady

I researched some other online reviews from users who have actually used the site… and it turns out that it is, in fact, pretty shady.

Earning on the site has a lot more to do with how much money you make in the traffic sent to your reviews… and that seems to be a lot different than what the website is claiming.

I am not necessarily going to label it as a ‘scam,’ but it really does seem like the site just doesn’t even work the way they say it will.

The more I learn about AppCoiner, the more I come to believe that it just isn’t a site worth pursuing. Even worse, I am afraid that it could end up being a waste of $27.

Want to make better use of $27? I would honestly put that money toward some other kind of side-hustle and just leave AppCoiner alone.

My Personal Feelings About AppCoiner

My personal advice is not to mess with this site. If you really want to make money through reviews, you can start your own affiliate site and actually make and keep your earnings for yourself.

There really isn’t much value in pursuing this side-hustle, as far as I can tell.

AppCoiner is like many other sites that are trying to make money off of you. You can earn money on them… but at the end of the day, you are just far more likely to actually earn money on something else.

Try Uber, Lyft, AirBnB, or flipping stuff on eBay instead. You can probably find $27 worth of stuff at garage sales and sell it on Craigslist for a profit! You could even buy some rags, window cleaner, and squeegees… and make more money washing windows. I would feel a lot better about that side hustle than I would about this one.

That, in my opinion, would just be a much better use of time than AppCoiner.

Our Final Opinion Of AppCoiner

Should you sign up for AppCoiner and try to make money reviewing apps?