Jobs for the ENFP Personality: The Champions of the World 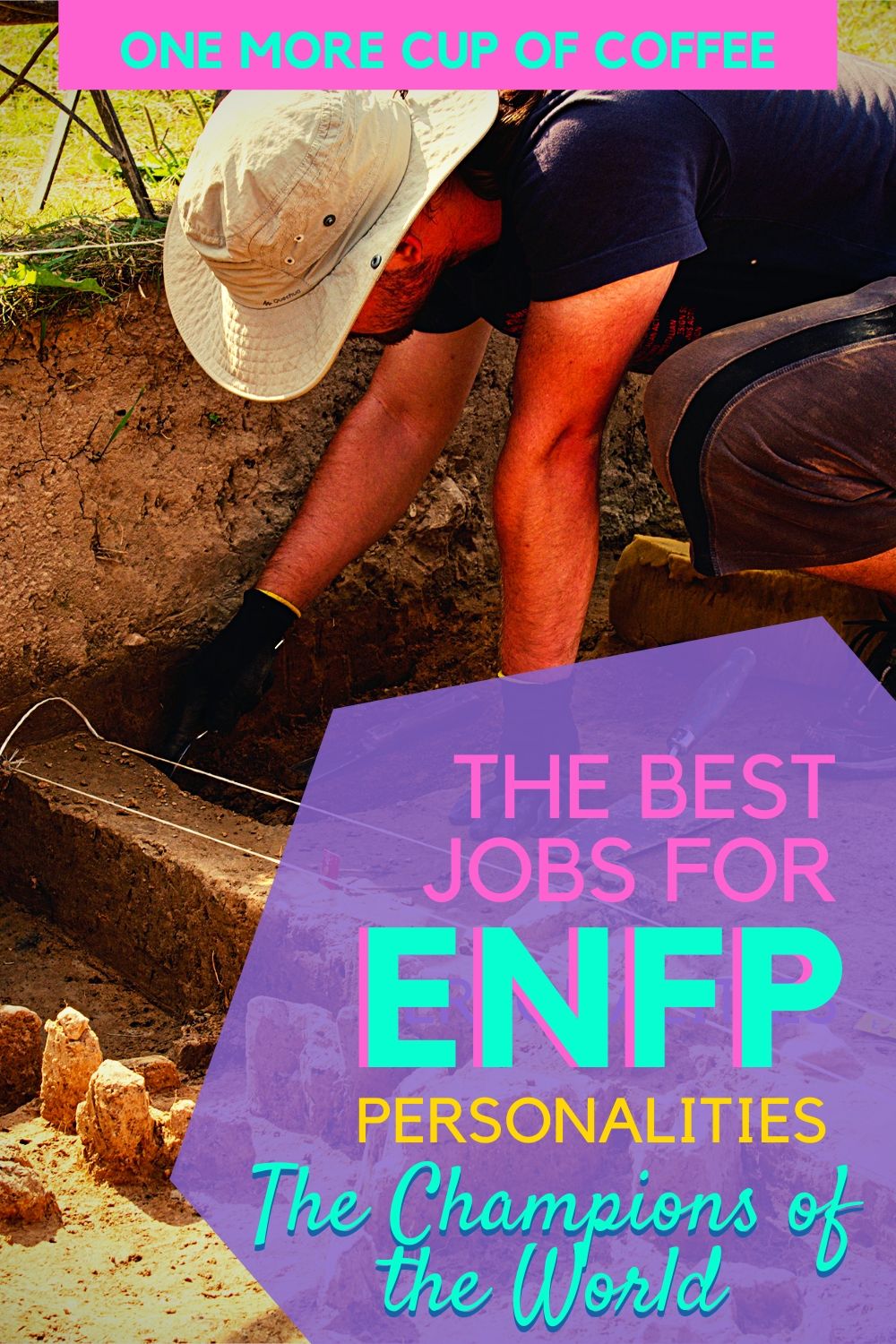 Are you the type of person who is likely to champion a cause? If so, you may have a personality known as the ENFP Personality. There are many great jobs for ENFPs that are perfect for their personality traits. I’ll be telling you more about them in a little while.

But first, let’s learn more about ENFP and the various personality types. ENFP stands for Extraversion, Intuition, Feeling, and Perception. The various abbreviations developed for the different personality types came from the studies of the notable psychiatrist, Carl J. Jung.

In his book, Psychological Types, Jung taught about the various theories of cognitive functions that he noticed in his patients. He realized certain personality types had common traits and ideals.

His work was further explored by other professionals, namely Isabel Briggs Myers, Katharine Cook Briggs, and David Keirsey. Their work led to the MBTI assessment, which broke the personality types down into 16 personalities found to be common in the population.

ENFPs were discovered to have a strong sense of ideals, which often drive them to come to the aid of others. It’s their relationship with others that motivate them to bigger causes and give them an energy boost to thrive.

They are social butterflies who also need time to regroup on their own from time to time to evaluate their own lives. While they are extroverts, they have an inner introvert who just needs time to come out and play from time to time.

You’ll often recognize an ENFP when you see one. They tend to have their own artistic flair and style, which is often reflected in their appearance as well as their activities.

ENFPs tend to ignore small details or the bumps in the road. They are able to see the bigger things in life and the possibilities that exist. They’re not very logical in their thinking as they tend to rely more on their gut feelings and intuition.

They dislike the mundane and routine in life. They are idealists who Keirsey called the “Champions.” They’ll champion a cause they feel deeply about and draw others in with them. They are also open-minded and welcome the discovery of something new.

The ENFP personality is creative and fun. They can also be charismatic and attract others with their charm. They can be highly emotional people because they feel a certain gusto and passion. As much as their personality is a magnet for others, the ENFP person also finds others that they hold in high esteem.

They tend to have a mutual respect for others that other personality types don’t often exude. In seeing others, they also see their needs from time to time and if an ENFP person can do something to help change the world of another, they will, especially if it’s for the greater good that extends beyond people, but in life itself.

They want to find meaning in the world and to support the causes which make it a better place. They’re not shy about stating their opinions either to that end. They’ll even take risks without thinking too much about them beforehand.

They act with their hearts and their feelings, instead of the mind much of the time. They’re free spirits who have no use for conformity. They crave the freedom to just be themselves.

QUICK STATS OF THE ENFPs

There are many great career options for the ENFP personality type. ENFPs are free spirits, so they have to find a position that gives them a perfect balance of independence, while not taking on the leadership roles. They don’t relish the idea of directing others.

They also are more likely to shun the corporate environment. The idea of an office and a suit is just too confining for ENFPs. Administrative tasks are just too humdrum for ENFPs huge personalities.

Flexible jobs seem best for ENFPs because they crave the ability to be independent and creative in their approach. They shine at jobs where they get to use their people skills. ENFPs are great communicators so jobs which require communication skills score a huge advantage with an ENFP at the helm.

They’re both natural speakers and listeners. People skills today are going by the wayside. Imagine where your ENFP personality can be a huge advantage to jobs that cater to human interactions. Your skills of perception are spot on, so finding a position that is a good fit for that should be a goal for sure.

You’ll also want to find something that is constantly on the move to keep your interest. You would get too bored at a position that offers no change from day one of your career to year 20. You are an adaptable and evolving person, so a good job fit is also one that is adaptable and evolving.

Careers like human services, some science careers, media and similar jobs are better-suited for the ENFP personality.

Let’s look at some of these more closely:

Actors have the ability to appear larger than life. People who are often gregarious, magnetic kinds of people often do acting jobs and that’s exactly the kind of personality of ENFPs. If you are an ENFP who loves to become another character, acting may be just the job for you. Whether it’s work in your local theater, stage acting or Broadway, or going for it all in television and movies, if you are an ENFP personality, you are likely to unleash your inner star.

Actors’ salaries vary widely. Many have day jobs in addition to their love of acting. But serious actors who are able to secure commercial spots and regular jobs can average around $50,000 a year. Of course, if you happen to be one of the very lucky few whose career takes off, the sky is the limit.

An archeologist is a great job for the science-minded ENFP because ENFPs love being on the move to discover new things. They get bored easily. I mean, who wouldn’t want to be an Indiana Jones for a living, right? If you always looked forward to science class in school or would love to discover the remains of an Egyptian army, archeology may be just your thing.

Archeologists study where humans originated as well as the development and progression of their behavior and lives. They study cultures, languages, remains, and characteristics of human life.

Fitness Trainers are great jobs for ENFPs because they are such great motivators with awesome people skills. If you’re an athletically-inclined ENFP personality type, perhaps being a fitness trainer would be the perfect job for you. Fitness trainers teach and motivate others in exercise activities, strength training, and stretching. There is always some new exercise fad, so it’s an industry that changes along with the ENFPs evolving personality.

Insurance Sales Agents often have to convince others that their product is the best. For the goal-oriented ENFP personality, this may be a good fit. With your people skills, charisma, and outgoing personality, it will be hard for potential customers to turn you away. One of the great things about insurance sales is you have the potential and ability to set your own salary by creating goals. It’s a flexible job that allows you to work the hours that fit with your schedule.

Interpreters are people who need great communication skills as they become a bridge to help enable two people who speak different languages to communicate. ENFPs are not only great communicators but very intuitive so that if something is not quite clear in communication, they are often able to decipher easily what is being said.

Massage Therapist is another great option for ENFPs that are people service oriented. Massage therapists are people who offer a hands-on approach, literally, to exude a calm feeling in their clients. Massage therapists manipulate the soft tissues of the body to induce pain relief, help rehabilitate injuries, improve circulation, relieve stress, increase relaxation, and aid in the general wellness of clients. If you have the ENFP traits, you are likely the kind of person a client wants as a massage therapist.

Public Relations Specialist is a great job for the ENFP person that can take just a smidgen of the corporate arena. As a public relations specialist, you would get to use your communication skills, charm, and positive personality to create and maintain a favorable public image for the organization you would work for. You might design media releases to help define public perception of the company you work for and its goals.

A sociologist is a job for a person who loves people, as ENFPs do. Sociologists study human behavior and interaction within the various social, economic, and political forces. Sociologists study the effect of social influences in people within groups and also individually.

Writers have highly flexible schedules that an ENFP can appreciate. If you have a flair for words, writing may be the perfect job for you. You could work as a freelance writer, pen your own books, write for newspapers or magazines, or more. The best thing is there is always something new and different to write about in our ever changing world.

The average salary of an industrious writer is around $55,000 a year.

We’ve gone over eight great jobs and careers that are perfect for the person with an ENFP personality. It should be easy to find one that suits your interest and personality.