Can You Really Make Money With The PanelPlace App? 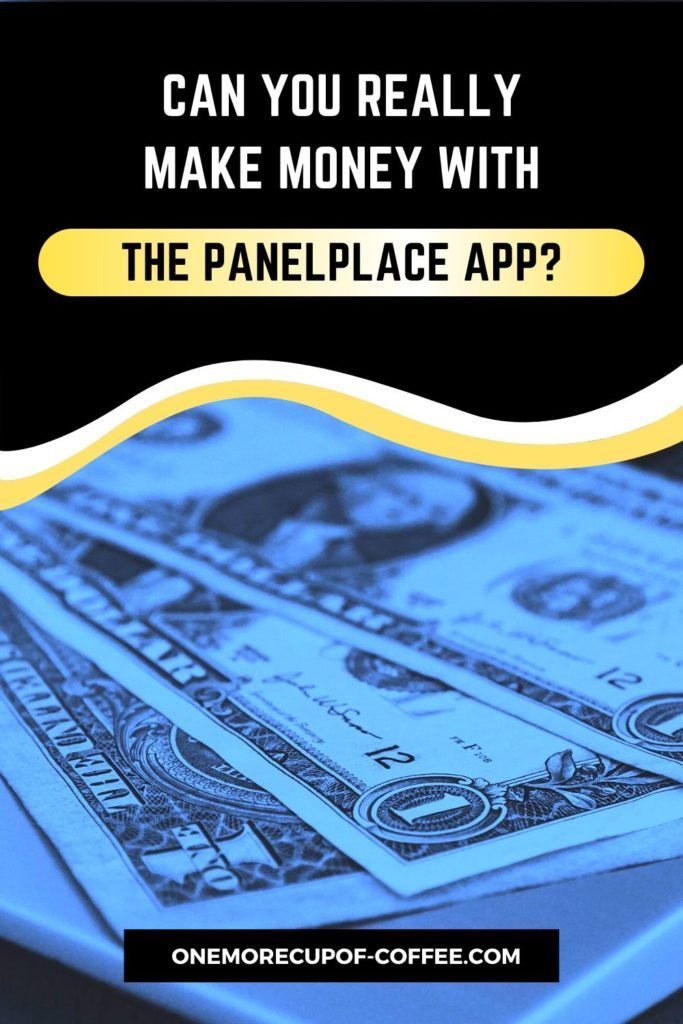 Nowadays, for most of us, it’s hard to imagine making ends meet without a side hustle of some kind. I have always liked the idea of making extra cash with apps, because they are mobile and can be used anywhere—so in theory, I could use them in my free time and make sweet cash on the side.

But can you really make money with the PanelPlace App? This was my question, so I downloaded the app and gave it a try.

Making Money With The PanelPlace App

To begin with, let's talk about how the app looks. The tagline for the app in the Google Play store reads as follows…

“All the best survey panels in one place. Start earning from paid surveys.”

This app really got my attention because of the stats. It has been downloaded about 50,000 times, and has a 3.7 star Google Play rating… which tells me a few different things about it. 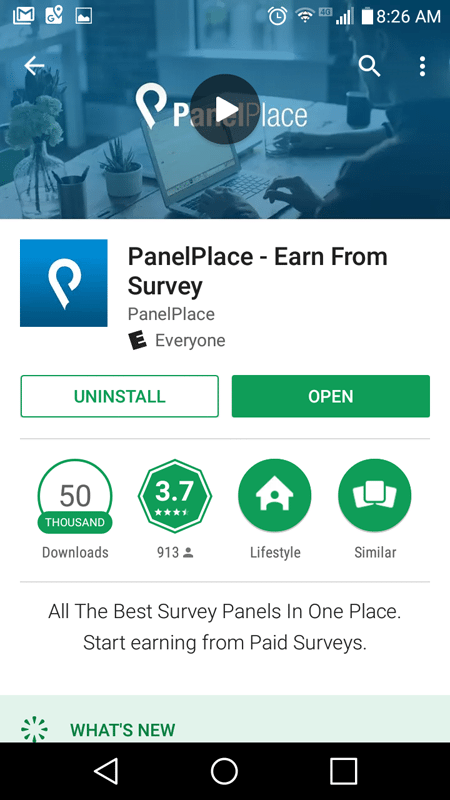 One thing that really got my attention about this app was the fact that it had recently been entirely re-designed. Here is what the ‘What’s New’ section had to say about the resent revamp-ment… 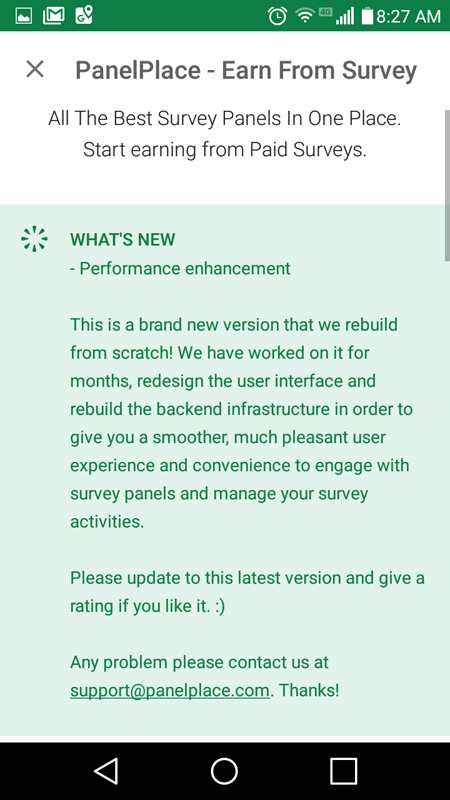 But you can only learn so much about an app by staring at the description. Here’s what I found out when I cracked it open.

Opening Up PanelPlace For The First Time

This is the first screen that I saw when I opened up the app for the first time. 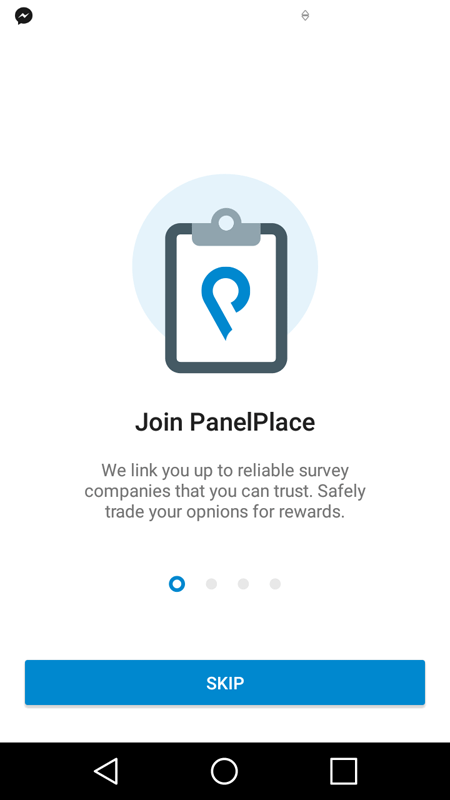 There were a few scrolling screens here that gave me information about the app. Here is the basic summary of what I learned on these screens…

After reading through all of this, I clicked on the ‘Get Started’ button to move to the next step. The next part was basically the sign-up process, which was easily accomplished using my Facebook account.

Next, I had to login—which I did, again using my Facebook.

The app took me back to the login screen again… which unsettled me. Was I even going to be able to sign in to PanelPlace?

I tried to log in again using my Facebook… and a ‘timeout’ message appeared at the bottom of the screen.

So I tried to manually fill out the information by creating an account with my email instead. I also turned on the Wi Fi on my phone to take advantage of better internet. But still—I got a timeout message.

At this point, I wasn’t sure if it was my device, or whether the app just didn’t work. I know that PanelPlace has been recently re-vamped, so I wasn’t quite ready to give up. I went back to the read-more section of the app, and realized that they have a website located at www.panelplace.com.

I used the browser on my phone to visit it. Here is what I found.

I tried to visit the site on my phone—and on my laptop. And it just didn’t respond. I literally couldn’t load it. I don’t know what the problem was, but at this point I was seriously starting to doubt that it was a problem on my end.

I tried to troubleshoot both my computer and my phone by visiting other websites, and both worked like a charm.

So what was the problem with PanelPlace? Why could I only access the front-end part of the app, but not get past making a profile?

And if it had recently been re-vamped, why wasn't it working?

I decided to go back to the ‘What’s New’ section and look for dates that would indicate how new the app was. According to this, it was updated on March 29th, 2017. That was roughly two months before I sat down to write this review—which told me two things.

I tried once more to load the website—and this time, was met with at least a bit of success. Here is what I found. 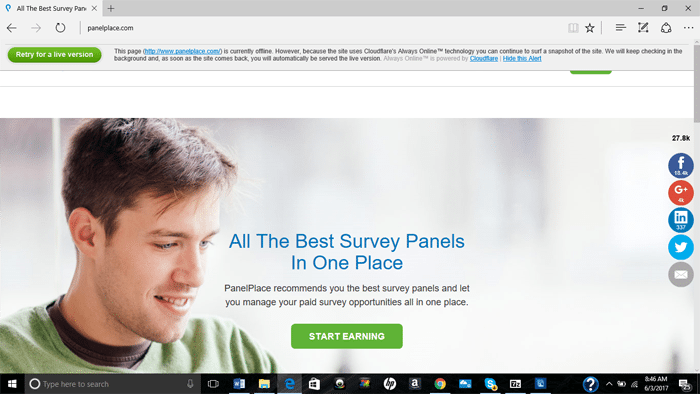 Ok, this told me that the website was currently offline. I wasn’t sure if this was a permanent thing, or if it was just a temporary glitch that happened to have taken place at the same time as my test—but I was determined to use this opportunity to learn as much as I could.

I tried to surf the page, which apparently wasn’t the live version.

I was sort-of able to browse the home-screen, and tried to sign up that way (I know… I’m a goober).

But I was met with this screen. 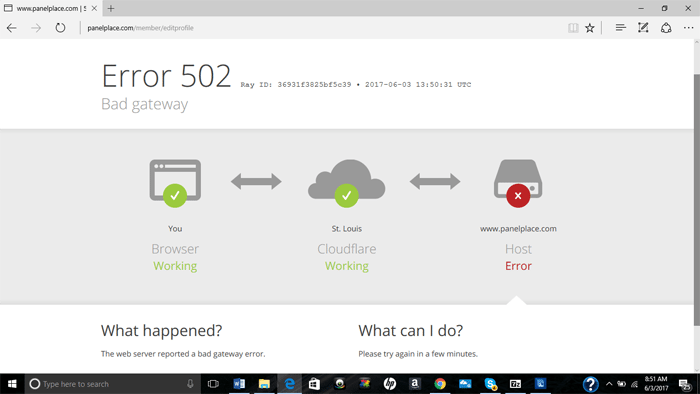 At this point, I had little choice but to go back to the Google Play Reviews to see if maybe this was just a bad morning for the app. Here is what I learned.

What The Google Play Reviews Said About PanelPlace

Alright, I found out two things very quickly by visiting the Google Play Reviews. First, I learned that most of the more recent 5-star reviews had no writing along with them.

They were just submitted 5-star reviews, which seemed a bit fishy to me. I’m not saying that this is a sketchy situation… but I am saying that it sure seemed to look like it.

Secondly, I read several reviews, submitted lately, that pretty much said the same thing that I experienced. The app crashed when they tried to make a profile, or it just didn’t work at all.

I see that customer support is commenting on a lot of these reviews, and seems pretty committed to trying to make it work… so I do not believe that the app is altogether dead.

But it does seem like this is not a problem that is localized to just today for me. Many people seem to have this problem with the app, and it looks like it has been happening for a while.

Some people do seem to be able to use it, so I’m not sure if it is just a problem with a particular country, or a particular range of devices, or a particular internet connection… but there does seem to be some kind of widespread problem that is keeping people from using this app the way it was intended.

Does It Look Like PanelPlace Is Going To Be A Good Bet In The Future?

Obviously, my experience with this app was… not good. At first, though, it looked kind of promising.

I have had mixed experiences with survey apps in the past. So an app that would give me access to all kinds of different surveys should, in theory, be a good idea—right?

That’s what I thought. But in practice, the app obviously just had too many problems that kept it from being useful. I couldn’t even create an account, and I didn’t seem to be the only one to have this problem.

Yeah. I mean, I could imagine it being plagued by the usual problems that arise with survey apps—but if the app is going to pull survey opportunities from many different places, then it seems like there would be a better chance of it working, right?

In the end, however, I am afraid that I will not be paying another visit to PanelPlace. At least, not that I can imagine.

There are a lot of survey apps out there, and I am sure that I can be disappointed by many more of them that will actually let me create and access an account (sorry for any perceived pessimism—but survey apps have really not had a good track record with me, as I've had poor experiences with many of them, like Nielsen Scarborough, ProOpinion, SurveySavvy and Univox).

Sorry PanelPlace, but you will have to do better than this to earn my business. It just didn’t really work for me.

Our Final Thoughts About The PanelPlace App