Can You Really Make Money With The NiceTalk Tutor App? 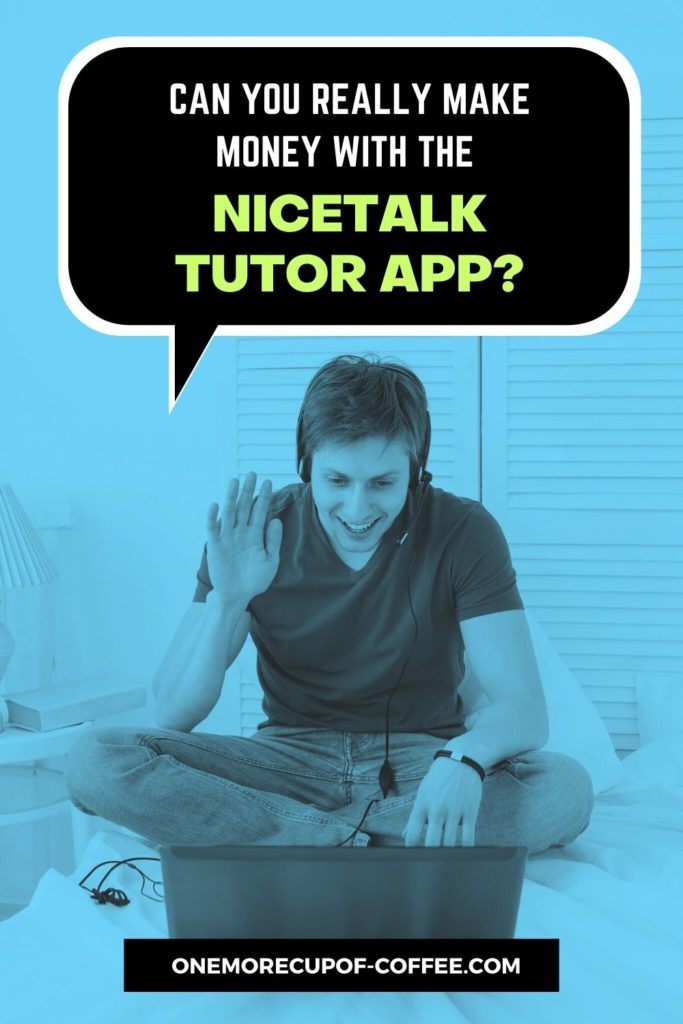 This app promises to pay you for tutoring English students in other countries! I will admit that I have been thinking about downloading this one for a long time and now have finally gotten around to it. But can you really make money with the NiceTalk Tutor App?

Apps that offer the chance to make money are a dime a dozen. Some are decent, while others aren't, but most don't provide you with much money for the time that you put in.

I wanted to see whether the NiceTalk Tutor App was any different, which is why I finally decided to give it a try.

My first impression of the app’s stats, however, was not incredibly impressive. 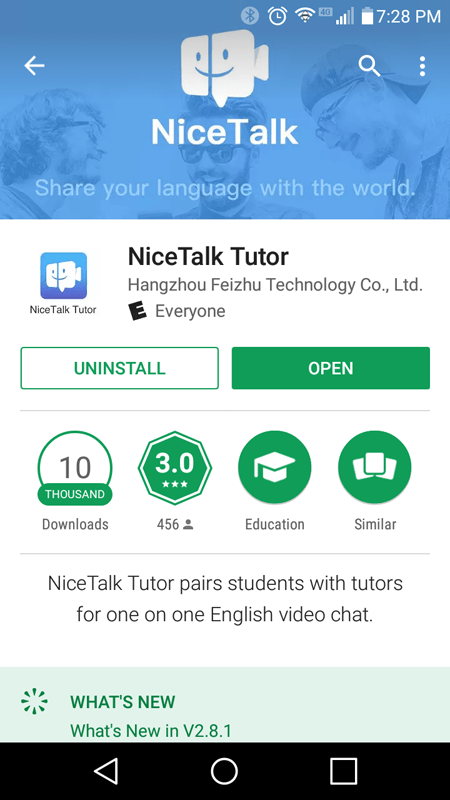 It has 10,000 downloads and a user rating of 3.0 stars. I am usually way more likely to like an app that has at least 3.5 stars, which sets this one beneath that by an entire .5… but, that doesn’t mean that the app isn’t going to work for me, either.

Mostly, the basic stats just give me a little bit of an idea about what will work—not set-in-stone information. For that, I like to actually try it out for myself, which is what I did next.

Here is a look at what I found upon opening up and trying out the app.

Opening Up The NiceTalk Tutor App For The First Time

The first screen that I came to was a screen that gave me an option to either sign up or log in. I obviously had to sign up first, so I was taken to this screen. 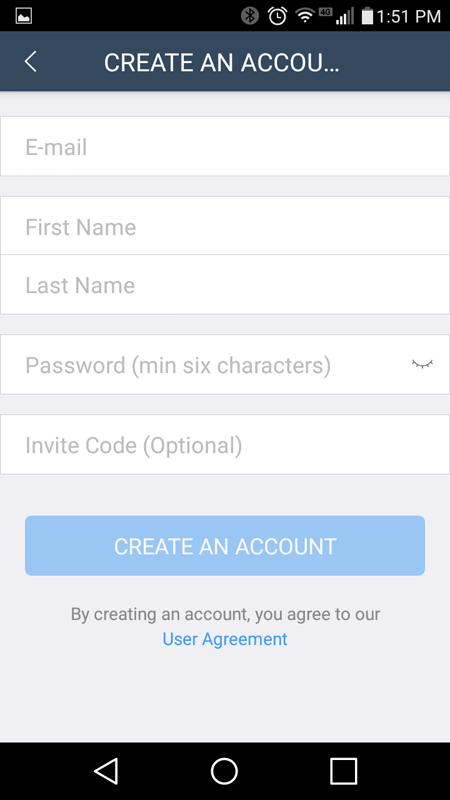 This was a pretty straightforward account creation process, in my opinion. I filled it all out. After that, I was kicked back to the log-in screen, where I filled in my email and password and attempted to log in.

Next, the app asked me to add a photo, record my nationality, and enter my spoken languages. Next, I actually had to record a quick video explaining why I wanted to become a NiceTalk Tutor.

The instructions said that this video was for my own records and would not be seen by my students… but I wasn’t sure if it would be used to determine some kind of eligibility or not… so I decided to try to make it as good as I could.

I recorded it and uploaded it.

Next, I was taken to a screen that told me that I needed to upgrade to the latest version of the app. I tried to cancel out of this, thinking that I could do it later. But as it turns out, I could not even progress forward without doing this.

So I did… but I also quickly realized that I needed to change my settings to allow apps from other sources to be downloaded to my phone because this upgrade apparently didn’t come from the Google Play Store, but from the company’s own website.

I went ahead and made this change, though I will admit that it made me a bit uneasy. As a general rule, I am not a big fan of changing this setting, because it could allow apps from dangerous sources to be downloaded to my phone.

But… with this app’s reputation, I seriously doubted that I was going to contract some sort of ‘malicious malware’ on my Android device, so I went ahead and did it.

The download was completed within minutes, and I tried to launch the app again. When I did, this screen popped up… 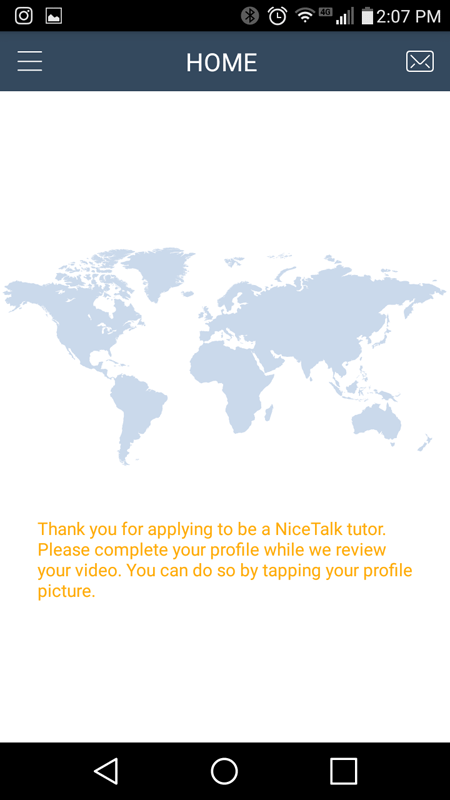 Ah! So, I was right. My video was going to be used as part of a review process. I was not sure how long this would take, but I decided to use this time to continue to take a look around inside of the app.

Taking A Closer Look At The NiceTalk Tutor App

There was a lot that I could add to my profile to ‘complete’ it. 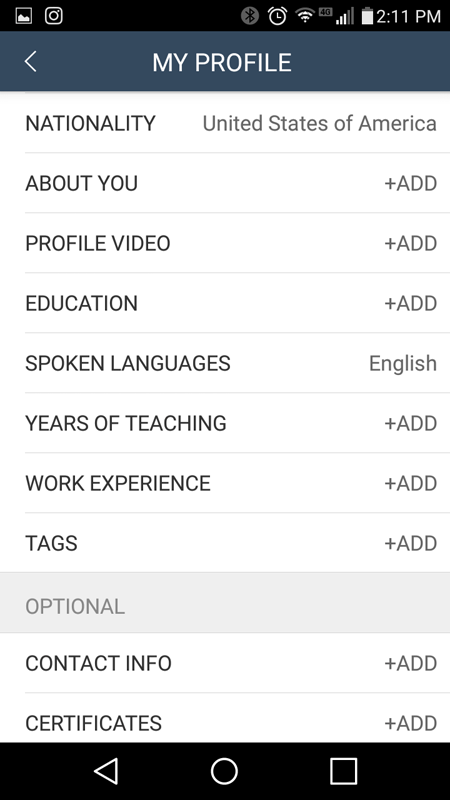 From the looks of it, there was a lot of information here to fill out. I even noticed that there were areas for things like teaching experience and certificates.

Obviously, you don’t need to be a teacher to use NiceTalk Tutor, but if you do happen to be a teacher, at least you can record that here, which is pretty awesome.

The drop-down menu also contained this rather long list of options. 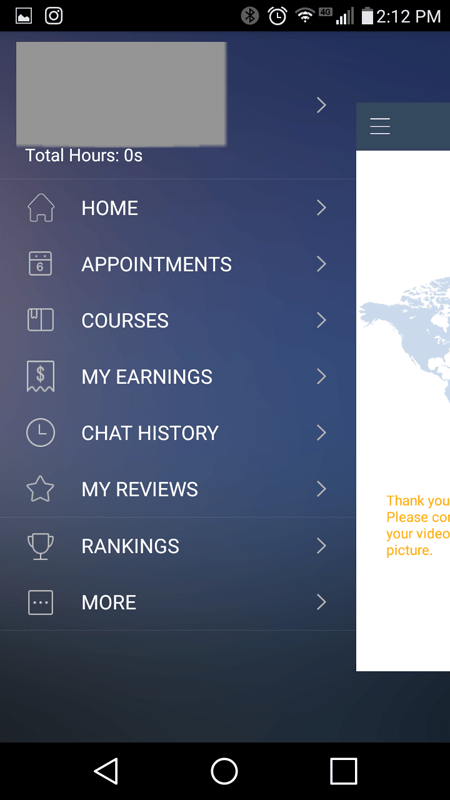 I wanted to figure out how much I could expect to get paid through the app, so I looked through the payment details and found this helpful FAQ, which answered my question rather nicely. 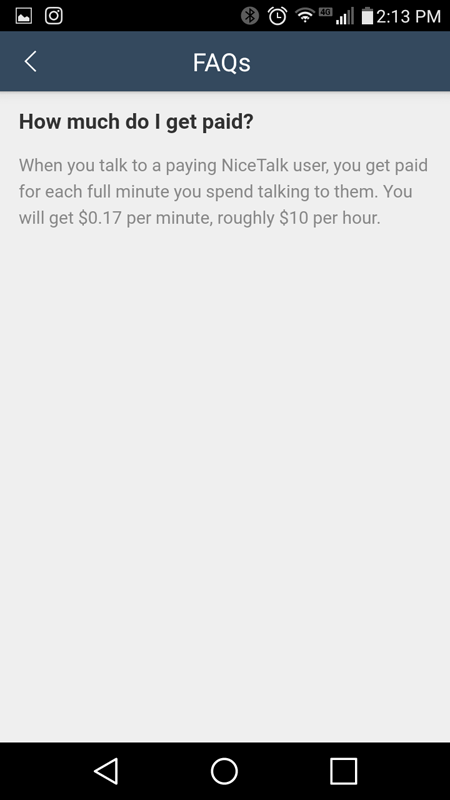 So, you get paid by the minute, and your payment pretty much adds up to $10 per hour. That really isn’t too bad, in my opinion. There are far worse and less profitable ways to spend an hour of your time—that’s for sure!

Withdrawing your money is fairly easy. You just add your PayPal email, and you can then use that to withdraw your funds.

That part is pretty user-friendly.

But now, as I was waiting for my video to get verified, I was curious about what I would find out in the Google Play Reviews. It seems like people who have been doing this for a while might have some valuable insight into how the process works… so that is what I decided to look at next.

First of all, I noticed right away that being sent to a third-party website for an update was a no-go for some users. Some called this suspicious and scam-like, while others simply chose not to do it and didn’t use the app because of it.

But, with that said, some users have reported a good experience with the app. Here is one example that a user posted… 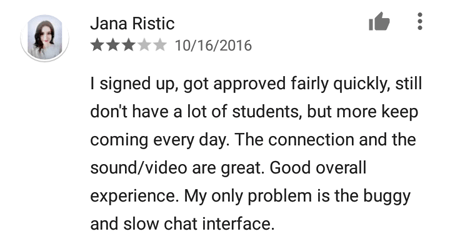 But it seems as though the app has also been experiencing some problems. Overpopulation of people wanting to teach seems to be one of them. Here is one review that seemed to indicate this… 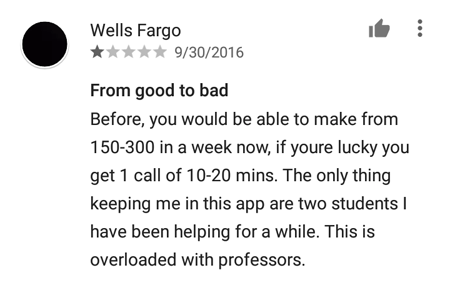 This user used to make very, very good money tutoring students, from the sound of it. But it sounds like this tapered off… which is unfortunate.

I have a feeling that some of this is probably tied to user error. If someone doesn’t have a very good profile set up, then students may be more likely to try someone else—so in this sense, it might be kind of a competitive environment.

But to be super honest, I am not sure if that is how this app works or not. I am not sure if students are assigned tutors, or if they choose them. I am sure that they must be able to choose them—which would explain why some people tend to do better than others.

And then, I have seen A LOT of reviews where people have said that they are unable to even sign up due to technical problems.

Either their introductory video won’t load, or it won’t get approved, or they can’t even film one… or they can’t log back in after they’ve created an account, or they can’t get their profile picture to work, etc.

It sounds like there are a lot of people who are just plain frustrated with the NiceTalk Tutor App—and I cannot say that I blame them.

My Personal Opinion Of The NiceTalk Tutor App

There were good and bad points about The NiceTalk Tutor App for me. First of all, I love this idea. Tutoring people in other countries who need to learn to speak English, and being able to do it for money, is awesome… because it helps other people while also putting some awesome money into your pocket.

I also love that the app makes this tutoring available at a pretty affordable, uniform price… but I also like that the price seems fair. In a way, this app would require you to work at a certain time each day, mostly based on when your appointments are—but for the money, that doesn’t seem like such a bad thing.

As for downsides—over-saturation of ‘language professors’ is probably the top one. But, glitches in the app are also a downside, as is the apparent lack of customer service (I also heard quite a few negative customer service complaints in the Google Play Reviews, most of them having to do with customer service that just didn’t respond to messages.).

Personally, I may try this app out for a few days… if I can get verified. If verification doesn’t happen soon, then I’m going to delete it, because I have heard too many people say that it took months for them to be verified… and I do not want to leave an app on my phone for months that I cannot even use.

Another option to consider is the site VIPKid. This tends to get better reviews. While the requirements are higher, those who can get in could find it an interesting way to earn from tutoring.

Our Final Opinion Of The NiceTalk Tutor App

How To Make Money As An Online Tutor
Next Post:Can You Really Make Money With Postmates.com?