Can You Really Make Money With The Iconzoomer App? 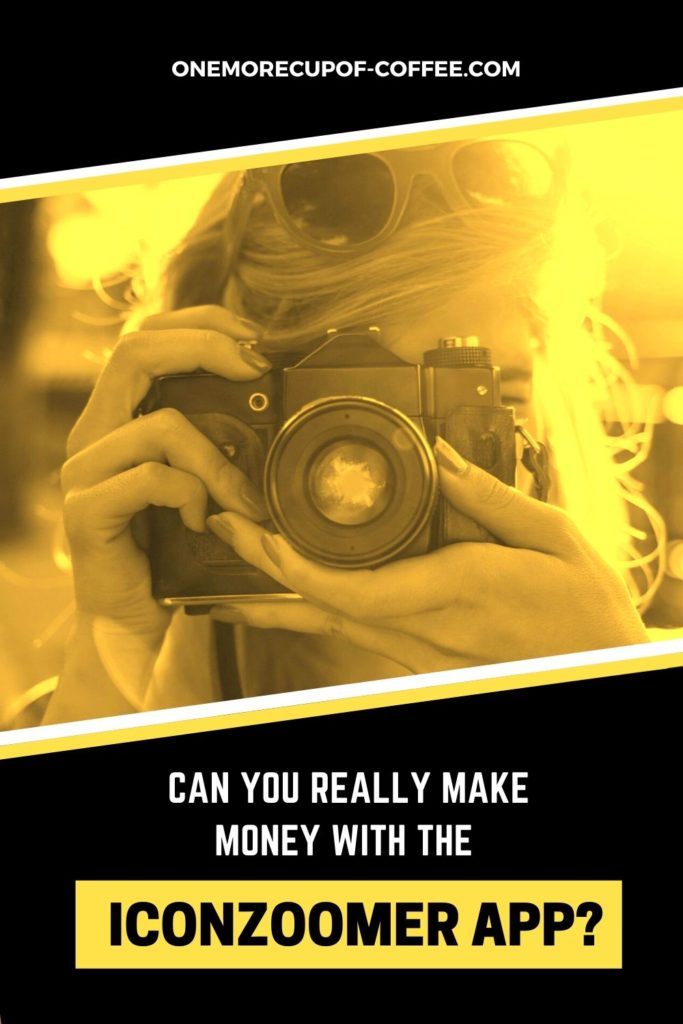 I’ve reviewed a few photography apps, but I’ve never come across anything quite like this one. But can you really make money with the Iconzoomer app as well?

This app claims to cross photography with the potential to earn extra cash… which definitely intrigued me, as I am both an amateur photographer and lover of all apps that can earn me extra spending money.

Making Money With The Iconzoomer App

Iconzoomer sounds interesting enough, but is it a good choice? Does it really work? Will it pay you enough to make it worth your while?

These were the questions I had in my mind as I got started… so I downloaded the app and decided to give it a try.

There was a short introductory video at the top of the Google Play listing, but all it really did was show a girl walking around when she suddenly receives a message from Iconzoomer with an assignment to take a picture of her favorite on-the-go drink.

The girl snaps a photo of herself with her drink on her phone (an old phone too, mind you… like the type that was barely advanced enough to have a camera), and sends it. Later, she gets a notification that she has reached 200 points, and it tells her that her iTunes gift card will be mailed to her in two days.

The video was almost weirdly old, actually. Here it is, just so that you can take a look if you want. Actually, from the look of it, the video had been uploaded about 6 years ago… which got me to wondering exactly what was going on with this app.

So I started looking at the reviews, and found that the latest review seems to have been left back in 2015!

But I also think that I know what the reason for that is. Take a look at this…

What I Immediately Noticed Was Wrong With Iconzoomer

First of all, I noticed that it had a pretty bad Google Play rating. 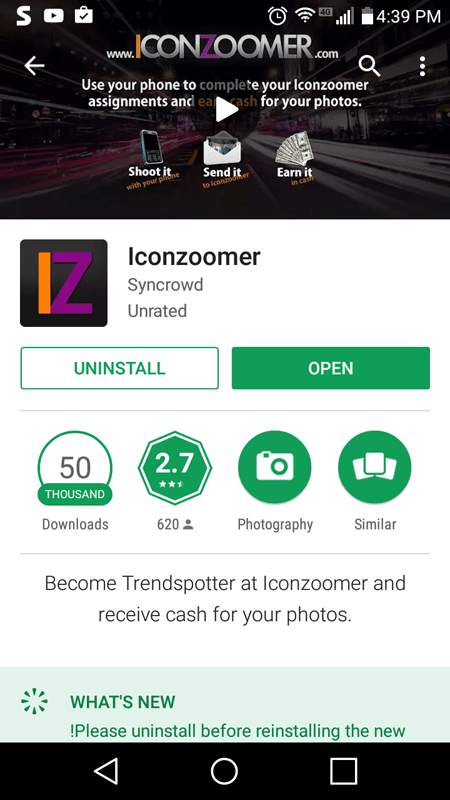 At 2.7 stars, it’s not looking so hot. It does have 50 thousand downloads, which is good… but I wanted to take a closer look at the review stats to see exactly what they looked like.

Look at all of those negative reviews. I’ve never seen anything quite like that before. It’s little wonder that nobody has been using the app with so many 1-star reviews to its credit.

Well, I shouldn’t say that so plainly… it’s impossible to say if anyone is using the app… but it is pretty easy to see that it hasn’t been reviewed in quite some time (or so I thought… more on that later), so that’s a thing.

Nevertheless, I was determined to give it a try… even if it looked a bit ‘dead’ from a distance. Here’s what I found when I opened it up and tried it out.

Opening Iconzoomer For The First Time

First-things-first, the app wanted me to create a profile using my email and a password… which I did.

But it seemed to freeze on this screen, and then a screen popped up and told me that Iconzoomer had stopped. It asked if I wanted to report it, or if I wanted to just click ok. I clicked ok, and decided to start again.

This is the screen I was faced with, yet again… 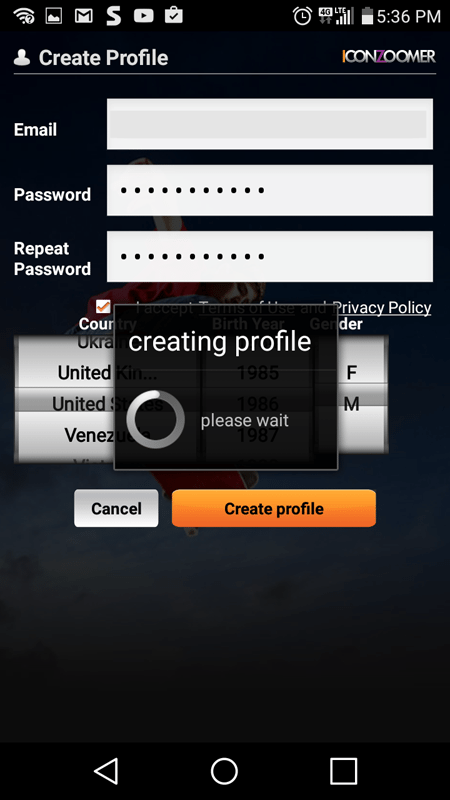 I waited for what seemed to be a minute or two when I got the same message.

I wasn’t sure if Iconzoomer was offline, or if it was just my phone or something technical like that… So I took to Google to figure out what was going on.

Part of me figured that, with the evidence in front of me, Iconzoomer was now a thing of the past. But I still didn’t just want to assume this, because sometimes apps work weirdly on specific phones, and to be honest, my phone isn’t what you would call a ‘top of the line’ model.

So, I wanted to be thorough and fair, because the app seems to work fine until the time comes to create a profile… and then it just seems to crash.

Checking Google For Information About Iconzoomer

I wanted to find out if other people were having a similar experience as me, so I beseeched the gods of the internet to provide me with an answer… and I was actually pretty disappointed.

I didn’t find a single reference to Iconzoom dating to any time after 2015… except for a couple of really shallow reviews on what seemed to be affiliate-marketing sites, published back in 2016, by authors who obviously didn’t use the app before writing their post.

Anyway, what I found on Google didn’t bode well. So I went back to the Google Play reviews to see what else I could find. Was Iconzoomer really done? If so, what had happened?

This is what I wanted to find out, because posts (yes, shallow ones… but still posts) online published as late as 2016 were still saying that Iconzoomer was a good app to use—so I felt like I had a responsibility to get to the bottom of the story, as our readers deserve more, in my opinion than open-ended mysteries.

So, to the Google Play Reviews, I went. Here’s what I found.

First off, after digging for a little while, I realized that there were some reviews from 2016, and even later… and some of these said that users could no longer sign in through the app, but that they could through the Iconzoomer website.

So, I decided to go check out the website.

I spent quite a while trying to find it—but at the end of my search, I came up with nothing. No URL I tried, or Google search that I could think of, ended up giving me a website dedicated to the app. I even checked the Read More section of the app store in an attempt to find a link… but to no avail.

This was, yet again, a dead end.

I found another review that was, surprisingly, from December of 2016 (which wasn’t that long ago actually) where someone talked about getting the app installed, and receiving assignments… but they said that they didn’t like the assignments and uninstalled the app.

Another reviewer, again from 2016, said that they didn’t like the app because they never got any assignments.

So, it would seem that the app was working not all that long ago, though there are a lot of reports of glitches and that sort of thing. But really, all things considered, this was a wild-goose-chase… because the app simply didn’t seem to work for me, and I couldn’t really find anything out about it that I needed to know.

It’s like the app just doesn’t exist anymore, and I’m looking at ‘ancient’ pieces of some sort of lost civilization, trying to figure out how its users lived and worked (lol… I know, that analogy is pretty dramatic).

What Is My Opinion?

I think it’s safe to say that Iconzoomer is no longer a viable option. Back in the day, it might have been interesting to me. It sounds like it started off pretty strong. I’m not sure what happened.

Maybe the app started messing up and the company abandoned it? Maybe the company stopped making money and just stopped keeping it up? Maybe the user base wasn’t large enough to support it?

I kept going back and trying to figure out what went wrong because I kept seeing a little bit of evidence that suggested to me that, maybe, the app was still working, and that my phone just couldn’t load it. But I have pretty much ruled that out at this point.

The app just doesn’t seem to be doing anything nowadays. If I’m wrong, and someone is using the app and making money at it, feel free to leave a comment to correct me… but as far as I can tell, Iconzoomer is a thing of the past. It’s a shame, maybe, because it seemed like a cool concept. But like so many other cool concepts, the state of being ‘cool’ does not necessarily guarantee success or long-term financial viability.

I have reviewed a few other apps like this in the past, and they were pretty sweet, actually. For example, the Foap app is still functioning and can be a way to make some money from photos. The MarkedShot app is another one to consider.

I like photography apps. I’m kind of an amateur photographer myself, so I’m always interested in opportunities to take pictures and things like that. And obviously, I’m always excited at the prospect of making money off of my photos! So that’s another thing.

At any rate, if you decide to download Iconzoomer, it likely won’t benefit you… as it doesn’t seem to be working. That doesn’t mean that you can’t give it a try if you want to, but I’m afraid to say that it seems to be done for.

Our Final Thoughts About Iconzoomer