Can You Really Make Money With The BitMaker App? 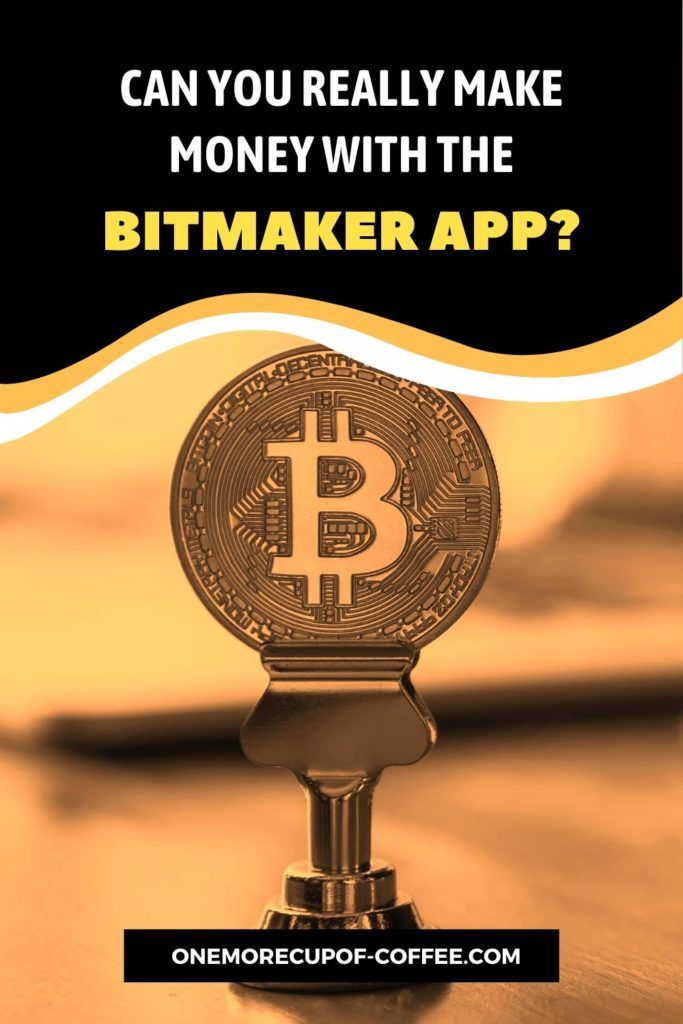 This app claims to help you earn Bitcoins by asking you to play games and try out apps. But can you really make money with the BitMaker app?

The basic stats for the app on Google Play are actually quite good. Here is a screen shot of the opening page of the Google Play listing… 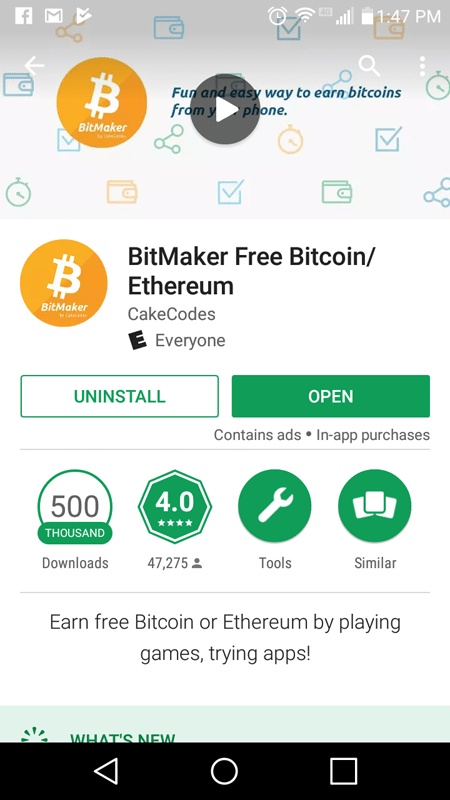 The app has over 500,000 downloads, and a Google Play rating of 4.0 stars, which is pretty good. It has also been reviewed by over 47,000 people, which is also quite impressive.

It has a pretty large user base—but I was obviously interested in how the app actually performs—from the inside out.

Judging by the app description in the Google Play Store, it sounds like it is a typical ‘Offers App,’ which is essentially an app that rewards you for completing offers. In this case, the offers are games that you can play, and apps that you can try out.

Obviously, the Bitcoins bit is unique… but we will get to that!

I don’t have the best luck with these types of apps most of the time, but I was more than willing to give BitMaker a try!

Making Money With The BitMaker App

Opening Up BitMaker For The First Time

Upon opening up the app, I was greeted with this screen. 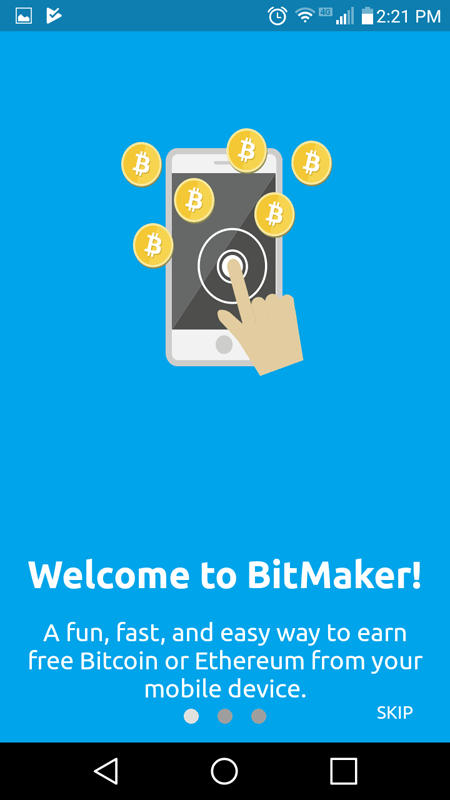 This began a series of several screens that gave me more information about the app. Here is a summary of what I learned on these screens…

After I got through these introductory pages, I was taken to this page. 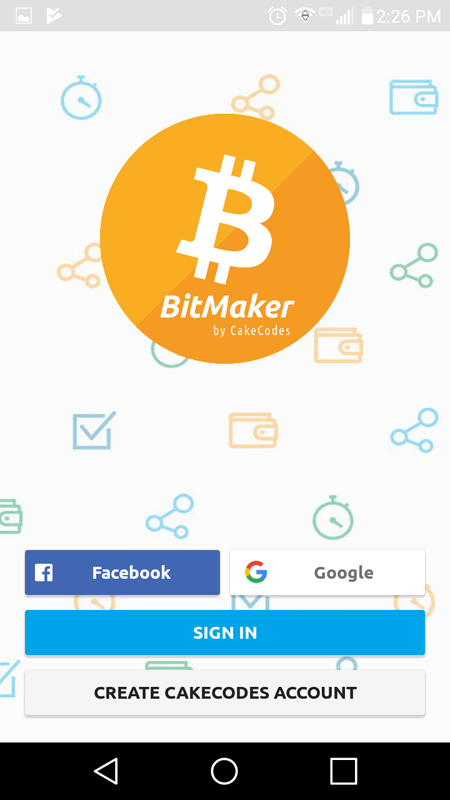 I chose to sign in using my Facebook login, which is pretty straightforward most of the time.

They asked me for a nickname, and I gave them one. They also asked me for a referral code. I didn’t have one, so I skipped this part. What came next was what seemed to be the main hub of the app. 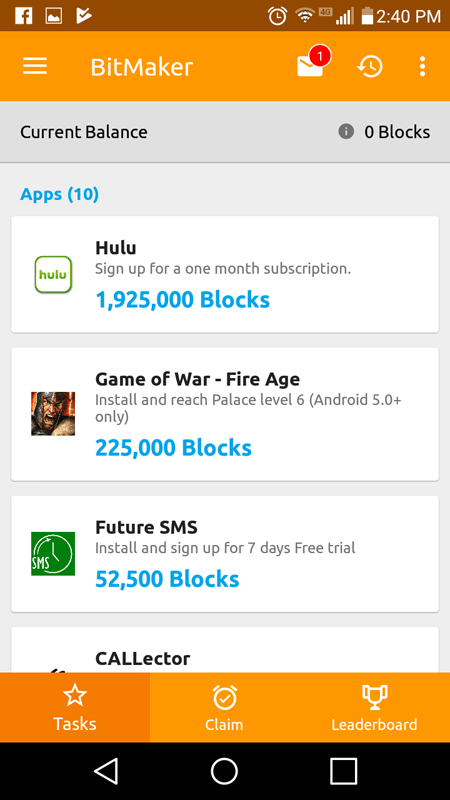 Here, there was a drop down menu, a message folder, a current balance counter for Blocks (Blocks seem to be like the ‘points’ that this app uses), a task history menu, a list of offers that I could redeem to earn specific types of rewards, and icons at the bottom for the ‘Tasks,’ ‘Claim,’ and ‘Leaderboard' tabs.

Overall, the app looked really nice thus far. It was easy to understand and seemed to do a good job of presenting the relevant information in ways that worked.

But I was really surprised to see how many ‘Blocks’ you could earn for completing some of the offers. For example… if you installed and reached level 6 on this one particular app, you could get 225,000 blocks.

That, to me, sounds like a lot! I have seen apps offer like ‘6,000 points’ for such a thing, but then again, this made me wonder what kind of trade-in value the blocks had in real-world currency.

But, the high numbers of blocks being thrown around here also resulted in a vast difference in some rewards. One offer that I saw paid out 1,925,000 blocks… while another only offered 52,500.

So, the first method of business was to calculate how many blocks I thought I could earn, on average, using this app.

How Many Blocks Could I Earn Every Day Using The BitMaker App?

I looked at the offers and tried to add up about how many Blocks I thought I could earn in a period of 7 days (one week), and then divided that number by 7 to come up with an average per-day number, since the numbers of Blocks for offers were so spread out all over the place.

The number that I came up with was about 52,000 blocks per day. If I spent twenty to thirty minutes a day on the app during down-time (or maybe a bit less… this was a conservative estimate, for sure), this is about what I figured I could earn.

How Much Real Money Are Blocks Worth In BitMaker?

I went to the ‘Claim’ page to try to figure this out, and ended up watching a video to earn 500 blocks. So this, I figured, would help me to figure out what the conversion rate was for Bitcoins.

But when I tried to figure out how to withdraw my funds, I was greeted with this message… 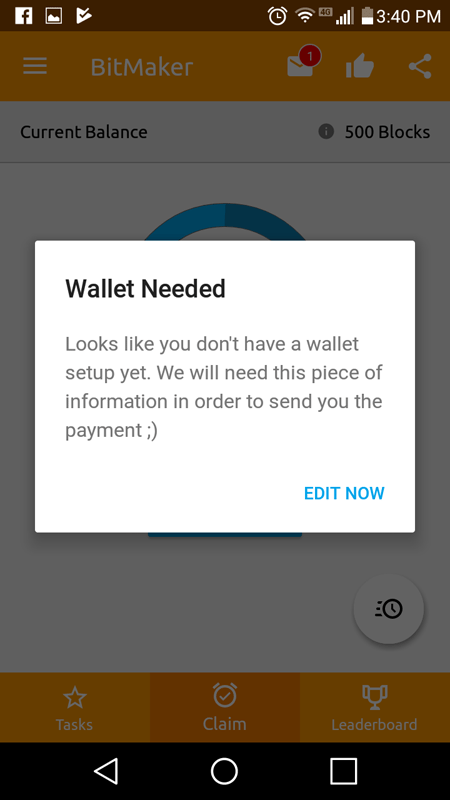 I clicked through to the next page, and found myself here. 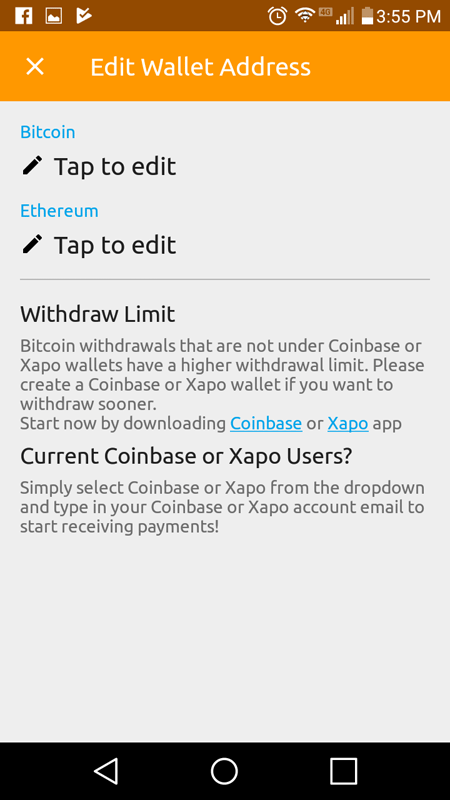 I clicked to edit my Bitcoin address, and was taken next to this page. 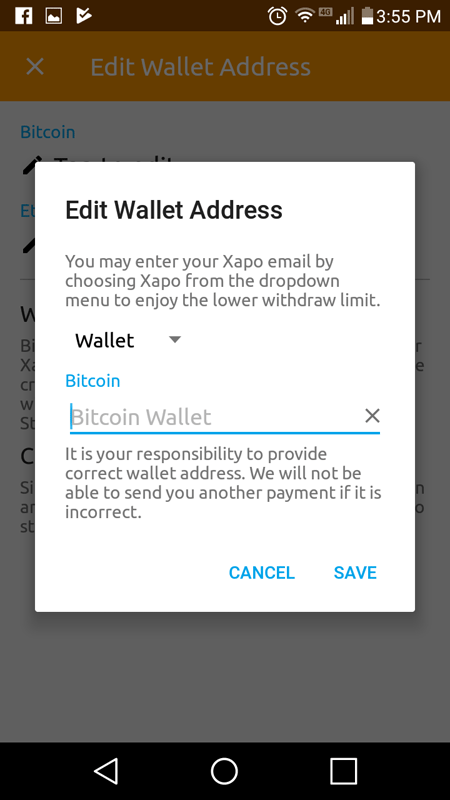 Here, I reached a bit of an impasse—because I didn’t have a Xapo account. This, strangely enough, seemed to be keeping me from figuring out how much the Blocks were really worth—but I had one more idea.

I tried to access the FAQ section, located in the drop down menu, in hopes that it would give me some indication of what Blocks were worth. But the app wouldn’t load it! I don’t know why. I tried several times. But the app simply would not load the FAQ screen. No matter what I did.

I backed out, and was quite disgruntled with this—until, on a whim, I clicked on my Block balance… and low and behold, this is what popped up… 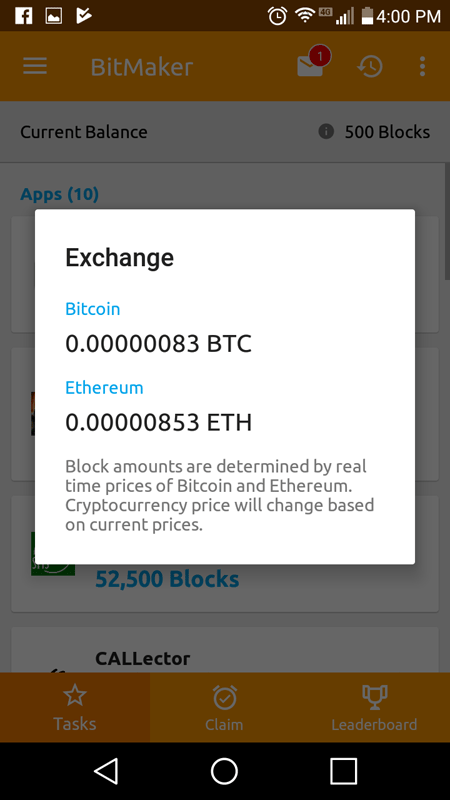 But, what is a BTC worth?

So… the exact amount of money in USD that I could expect to make with this app in a month’s time, based on the current value of the BTC (which will probably go up, honestly)… is $6.39.

(Disclaimer!!! I am not a mathematician. To be honest, I am not even that good at math. I think that I have done these calculations right… but if you see an error, please feel free to leave a comment and let us know, so that we can correct it!)

So, In The End, What Did I Think Of BitMaker?

This was a really interesting app. The fact that it pays out in BTC and ETH is really cool—though I will admit that I have had a bit of trouble figuring out why the company would go to the trouble of doing it this way.

The really high block numbers, coupled with the super-low BTC numbers, serves to make everything a lot more confusing, to be sure. But, it also results in a system that could be more universal and used anywhere in the world.

Not every country uses the USD, so for that reason, the BTC and the ETH could serve as more universal substitutes.

It also gives the app a bit of flair. It’s almost gimmicky, but it does work. It is also a bit more difficult to get your payout, because you need to have an account with a different service to receive Bitcoins, so that is a thing.

As far as the app itself is concerned, it wasn’t necessarily anything super special. It looked good and worked well. If you figure things into USD denominations, you actually earn far less (I think… if my math is correct) with this app than you would with other apps in the same category.

It is true, though, that Bitcoins are also increasing in value. So that’s a thing to consider.

All things considered, though, this app does not meet the criteria that would cause me to keep it on my phone. It does have the unusual Bitcoin feature that it brings to the table, and it also gives you the ability to earn extra cash pretty much anywhere.

But this is where the good points begin to wane. It also requires quite a bit of time investment to earn extra cash, and the per-hour payout just doesn’t really match up to what I would call ‘worth my time.’

The app is well-made, but there are better ways to earn extra cash, in my opinion. Besides, this isn't the only offers app to pay in Bitcoin. BitcoinGet and Bitcoin Reward both follow a similar pattern.

Our Final Thoughts About The BitMaker App