Can You Really Make Money With ShareMagnet? 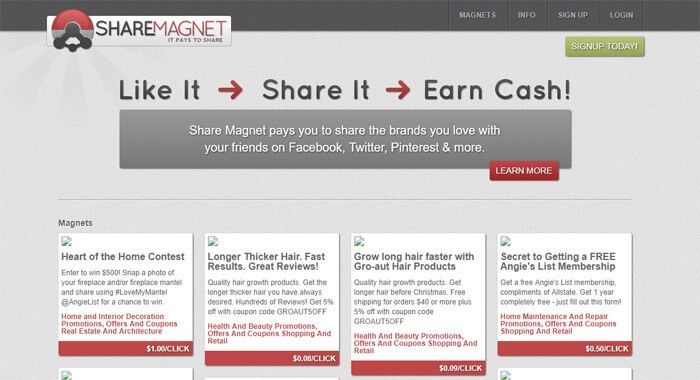 I found this site while researching new and inventive new ways to earn cash online, and it promised to pay for every ‘click’ that I could get on certain shared posts on my social media. But can you really make money with ShareMagnet, or is this another ‘gimmicky’ site that isn’t going to pay in the long run?

I love the idea of earning money online through side-hustles. In fact, I feel like online sites give people like me some of the best opportunities to make extra cash in our spare time (especially in theory). Websites can be accessed whenever you have access to the internet, and you can pretty much use them whenever you want.

Plus, they offer to pay you for every click you get, which is basically passive income. (And if you are as into the idea of a quality side-hustle as I am, you probably know that passive income is a super-exciting prospect!)

But sites that pay also generally come with a few downsides. For one, they tend not to pay out very much. And two, they can sometimes lack consistency. And it takes flexibility, profitability, and consistency to create a real, quality side hustle.

So what would I discover about ShareMagnet?

My First Impression Of ShareMagnet

So my first impression of the site was ‘medium.’ It wasn’t necessarily ‘awesome,’ but it wasn’t terrible either. The main thing that I noticed is that the ‘magnets’ shared on the landing page looked a bit weird to me.

First, I tried to open the web page with Microsoft Edge, but it actually didn’t look right—so I switched to Google Chrome, and that seemed to work better.

But I still couldn’t escape the feeling that the site wasn’t loading quite right. There were little icons in the top corners of the magnets that seemed to suggest that there should be images to go with the headlines—so I am just not totally sure what was going on.

Maybe you don’t actually see the images until you share the magnets on social media? That is a possibility, but I was still not totally sure about it.

Anyway, the magnets themselves were mostly headlines about products and/or news stories. I liked them, actually. Some of them seemed pretty entertaining, and I felt like I would click on some of them if I came across them on social media.

I was also surprised at how much money you get paid for clicks. The value for clicks on the magnets on the home page ranged from $1 down to like $0.08. But still—that is pretty awesome! I mean, I can definitely imagine getting a few clicks on any one of these based on just my limited friend’s list.

Imagine what someone might be able to do if they had a huge social media following?

I scrolled down the page to see what else I could find, but what I found was that the further down I scrolled, the more magnets I found. There were seriously all kinds to choose from.

(Note: Magnets are posts that you can share on your social media. And when someone clicks on your shared posts, you get paid for it.)

At the moment, I was actually wondering if there was something I was missing. This entire concept seemed super-simple—and I found myself curious about what it would take to actually get money into my account from these online activities.

So I decided to read about the website a bit in some online reviews. Here are what some of my favorite review sites had to say about ShareMagnet.com.

What Other Review Sites Had To Say About ShareMagnet.com

So, reading about this site on review sites taught me a few things about it that I didn’t know before. First of all, I learned that when you join ShareMagnet, you choose 10 interests from a long list of interests, and those are the categories that you can choose posts from as you attempt to make money on the site.

I also learned that you can customize the message on the link when you share it, and that these shares also usually contain images—so that is cool.

When you withdraw your money, they pay you via PayPal. Also, the minimum withdrawal amount was said to be $1.

One thing that a lot of people don’t understand about ShareMagnet is that earnings are a bit delayed. If you share a post and get some clicks on it today, you probably won’t see your account credited until tomorrow.

This is said to ‘freak out’ some new members because they feel that they are getting scammed until the money actually shows up in their account.

I have also heard that some users complain that their account never gets credited for clicks. If this happens, though, most people report that taking the problem to the support team gets it resolved rather quickly.

I hate to see glitches like this, but I also like to see that problems of this nature are generally taken care of rather quickly.

What Seems To Be The Common, General Opinion Of ShareMagnet?

As far as I can tell, most review sites that I have looked into have said these things about the site.

First of all, they call it legitimate.

Secondly, they say that it is most definitely a site that can help you to earn a bit of extra cash.

And third, they say that it is not a site that is going to make you rich.

There have been some user complaints about not being able to make as much money with the site as it first seems that you can make—but this doesn’t really surprise me either. Sites like this do give the impression that they could be very profitable, and in theory, they really could be.

But it is much more difficult to get likes on pages like this than you would think. And for a lot of users, earning more than a little bit of extra spending money is just not going to be easy to do.

Yes, you could spend a lot of time and energy in building up a larger web presence, but that is a tricky thing to get into—and many people find that it is difficult to keep up with once you get the ball rolling.

My Personal Feelings About ShareMagnet

ShareMagnet.com is one of the better sites that I have found for earning extra money online. In fact, it actually contains all three elements of what makes a quality side hustle.

It is flexible because you can share posts whenever you want, on your own time, as often as you want.

It is profitable because you earn money for clicks.

And it is consistent because you can continue to share posts and earn money on existing posts.

So will I be using it in the future?

I probably won’t, mostly because of one reason. I do not have a very big social media presence, and I feel like a site like this would work a lot better for someone who actually has a decent-to-large-sized social media following.

If you have a ton of Facebook followers, or are able to share posts and get clicks on other social media networks as well, then using ShareMagnet may very well be a profitable use of your time. But in all honesty, I would be lucky if I got even just a few clicks… and that wouldn’t even pay me for the trouble of choosing which posts to share.

I am also not super social-media savvy, so that is kind of a downside as well. If I was, I might consider growing my presence and trying to gain even more followers, not just for this opportunity, but also for other things as well.

But alas—this does not seem to be the category of marketing that I thrive in, so I will leave ShareMagnet to the more ‘elite’ social media warriors out there.

But yeah—all things considered, this is not a bad site at all. It may not make you rich, but it could certainly make you some extra money, without a doubt—and that is pretty awesome, especially since the extra income would be passive.

Just be aware that the idea is a little bit like making money by using Facebook or by using referral links. Both of those approaches aren't nearly as powerful as they sound.

Should you sign up and use it to try to make some extra money?