Best Jobs for the ENFJ Personality: The Leaders and the Teachers 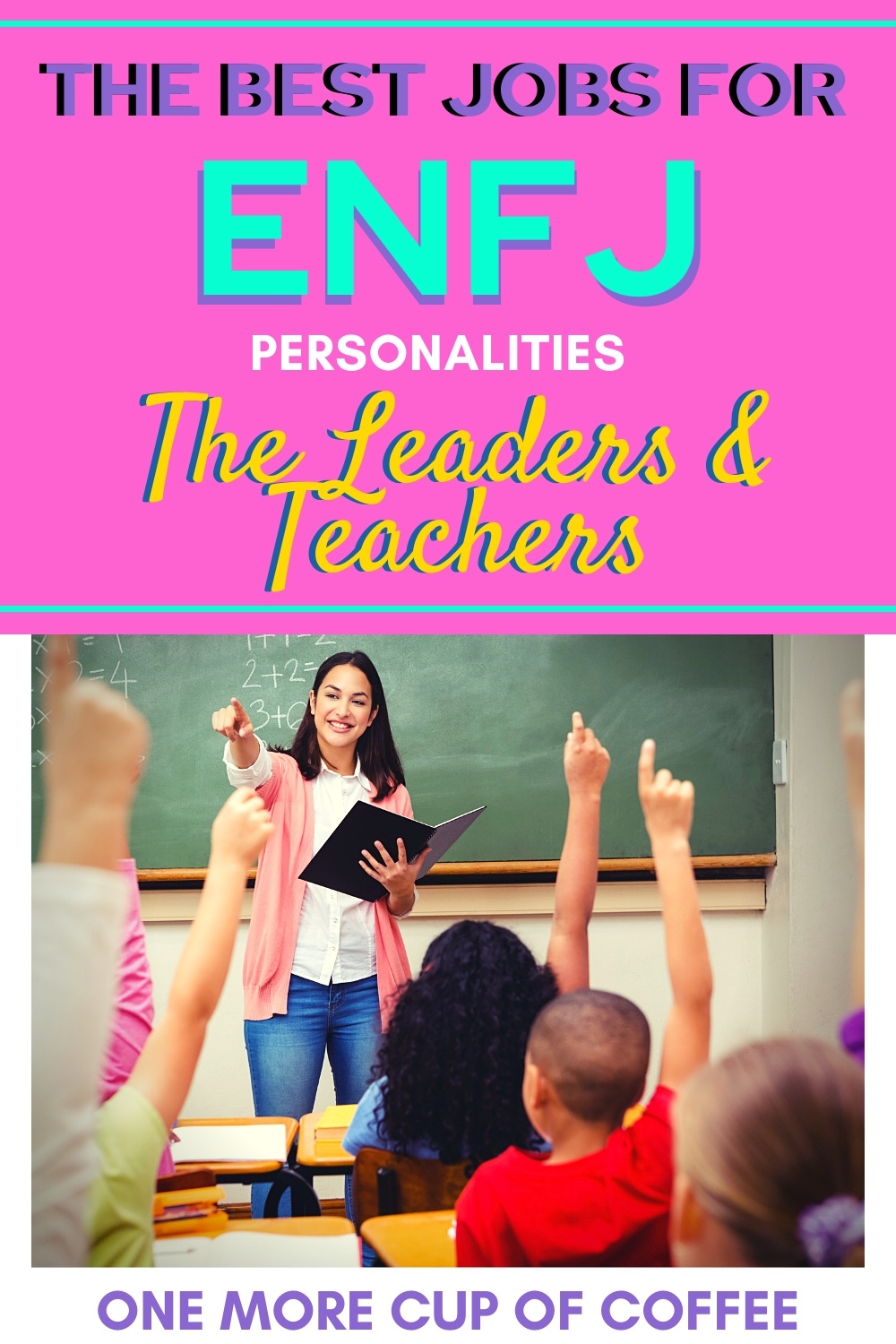 Has someone ever told you that you’d make a great politician? Were you the type of person that was always nominated for a leadership position in your school clubs? If so, it’s highly likely that you are someone who has the ENFJ personality traits. There are many great jobs that are tailor-made for ENFJs.

Isabel Briggs Myers, Katharine Cook Briggs, and David Keirsey used personality assessments they created from Jung’s work, most notably the MBTI assessment, to classify types of personalities. ENFJ is one of those classifications and is one of the personalities referred to as Teachers.

ENFJ stands for extraversion, intuition, feeling, and judgment. ENFJs account for around 3% of the population.

ENFJs enjoy being around other people and are often motivated by the energy they feed on in social situations. They look for feedback from others when it comes to making decisions and also thrive on their approval.

They tend to look to the future instead of the here and now. Small details may make something seem more conclusive than it really is, but ENFJs tend to look beyond that at the potential outcomes.

ENFJs are less logical than some of the other personality types. They rely more on intuition when it comes to deciding things. Much of that intuition is based on feedback from others. ENFJs tend to have a bit of structure and routine in their way of doing things, especially when it comes to planning their day. This gives them a sense of control in their lives.

The ENFJ personality types thrive at compatible relationships with others. They seek others who have the same values and develop their sense of community in this way.

At the same time, they have no problem leading their communities. They are natural leaders and are passionate about their beliefs and core values. Their charismatic charm is able to draw others into their field of knowledge, which is why so many become teachers and politicians.

Especially in today’s world, people often get confused about where they stand on many issues. The ENFJ person is confident and strong in their beliefs and at the same time are able to relate this well to others. This lends a sense of honesty to others, especially if it relates to them.

ENFJs are able to make others feel that they care about their causes. They can communicate in ways that speak to people’s hearts and are easily able to win them over. They have an optimism beyond what’s sometimes realistic about situations and sometimes need to reflect more thoughts into feasible outcomes.

Most ENFJs are people who want to practice what they preach. They love to lead others to victory and they’re willing to lose a few battles along the way, but in the end, they want to see unity and a better future.

Whether it’s the local high school football team’s coach or a politician, both thrive at victory.

It is rare to find a person with the ENFJ personality working a field that doesn’t involve helping others. They seek relevant and worthwhile work such as social work, teaching, counseling, and even religious work.

ENJFs focus more on their emotional intelligence rather than brain intelligence. They are creative in their endeavors and honest in their pursuit. They really don’t like systems or programs. The corporate world is not a likely place for an ENFJ to thrive. It’s too harsh of a world for their idealistic minds.

Other jobs which require quick thinking that could mean life or death are also not good for a person with ENFJ traits. Even though emergency response jobs help others, ENFJs are focused on the success of helping others and don’t deal with failure well.

Unfortunately in fields of service, like emergency response and law enforcement, ENFJs don’t have the short range focus or ability to deal with not always being able to help someone.

Rather, the ENFJ would be more the sort of person who would be in charge of these services. They are almost always focused on long-term solutions than the short-term ones. They want to write the story and the ending.

As long as ENFJs are able to work with others, they are happy. They are social butterflies that can really do well in many roles and are some of the most successful people you will ever come across.

ENFJs are also humble. While they can take on many tasks and learn new skills easily, many times it takes them a while to know their own worth. Even though they are as reliable as they come, they almost always think they can do more, often wearing themselves out in the end because all they want to do is make an impression or a difference.

ENFJs shine in managerial and take charge rolls. They won’t step on others to get to the top. They’re a different type of leader. They are great at forming teams to accomplish things, which they are able to do because of their magnetic personalities.

Confrontation is not their thing. They would rather motivate others by showing them each of their strengths and encouraging them to use those strengths in the best capacity. They like to surround themselves with workers who have the same vision as them, most often when the goal is to benefit the greater good.

While ENJFs are ambitious and full of energy, their motives almost always involve serving others in some way. If most could make livings as humanitarians rather than in the workforce, they would. They are driven by a sense of community and just want to find their place of involvement there.

Adult Literacy Teacher: Can there be many more fulfilling careers than to help adults learn basic skills such as reading, writing, and English? Or help them get their high school diploma after not having done it when they were younger? That’s the mission of the adult literacy teacher.

Fitness Trainers lead and motivate others to get to their best physical capacity through exercise and fitness routines. ENFJs make great leaders in this field as it can be discouraging to individuals attempting better fitness, but the ENFJ personality knows how to inspire others to change for the better.

The salary of fitness trainers averages about $34,000 a year.

Historians: Where would we be without historians? They research, analyze, interpret, and present the past by studying historical documents and sources. We can learn a lot about our future by knowing more about our past. As someone I know would say quite often to me, “We can’t know where we are going without knowing where we have been.”

Physical Therapists help injured and sick people rehabilitate and improve their movement as well as manage pain and disabilities. Think about someone who has had a stroke and how devastated they must feel to the point of wanting to give up. They won’t do it so easily with an ENFJ personality at the helm. ENFJs are able to motivate even those who are ready to give up.

Physical Therapists earn around $85,000 a year.

Politicians are people who want to serve in the public eye or office to make the world a better place. I know in this day and age it can be hard to believe in many politicians, but the truest ones began their careers with a heart for helping people.

Their earnings vary and are dependent on the level of office they serve.

Social Workers help people solve and cope with everyday problems in their lives. They may diagnose and treat mental, behavioral, and emotional issues. They work at many levels from family counseling, to school social work, to community work, and more

Social Workers earn an average yearly salary of $44,000 a year.

Theologians study religion and theology and how they shape and influence our world.  There are many things you can do with a theology degree from being a clergy member to using it as an accessory to your social work, to humanitarian jobs, and more. In any case, you can help others learn to use faith and hope in their daily living.

Theologians earn various salaries, depending on the field they opt to stay in.

I’ve given you seven great jobs for ENFJ personality types. Just think about what types of things really matter to you and go from there. As an ENFJ person, whatever you decide, you will figure out how to use it for the benefit of others. That’s what ENFJs do.