Is My Niche Saturated? 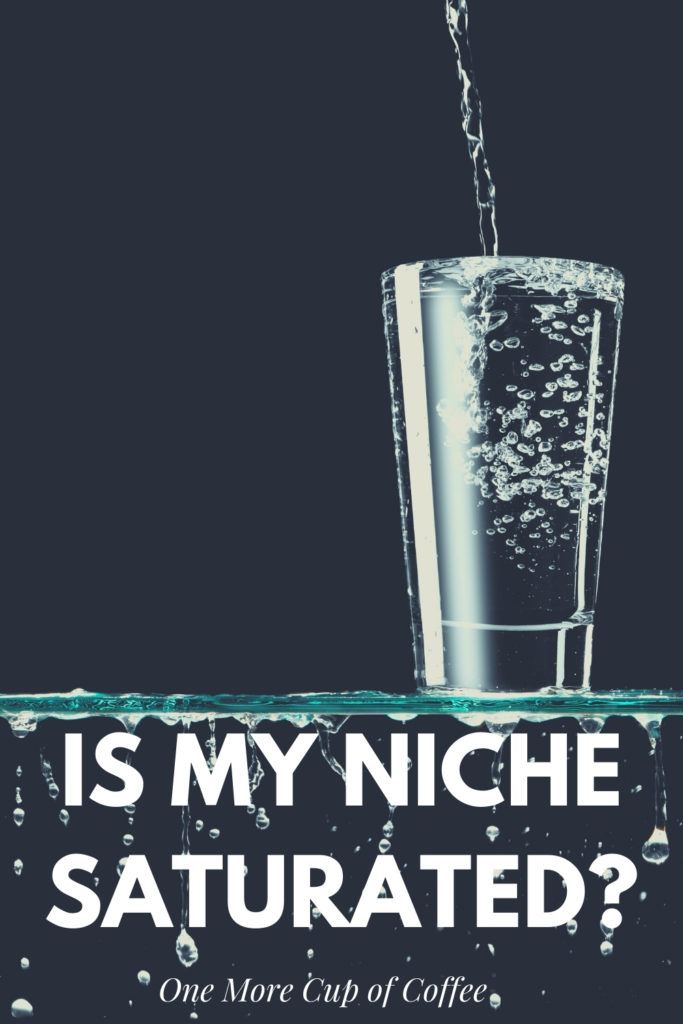 Though I write specifically about blogging and affiliate marketing, the concept of “niches” applies to any kind of business. Your niche is your audience who you're talking to. It's a group of people with some kind of similarity.

A common question I get when someone is starting an affiliate site is whether or not their niche is “saturated”. Popular topics are popular because there's a lot of people interested in them. Duh. Video games. Making money. Beauty. Fitness. All popular topics.

See how there's a human I talk about in each of those scenarios?

Is Your Affiliate Niche Saturated?

What Does It Mean When A Niche Is “Saturated”?

When someone says that a niche is saturated, basically, what they are saying is that there's not enough economic potential to make the opportunity worth exploring. There are too many competitors sucking up all the money, and there's not enough money left.

Some popular niches which are rumored to be saturated are:

Is there a way to tell if a niche is saturated? What if you really like a niche but it's saturated? Well, there's some good news. The truth is, there's no such thing as a saturated niche. You niche may need to be refined, but there's always a way to tweak your idea to make it work.

3 Reasons A Niche Is Never Saturated

1. Do The Research, And You'll Find More Below The Surface

In my opinion, there's no such thing as a saturated niche. An extremely popular topic will have tons of people interested in it, and they can therefore be subdivided further into smaller audiences. That's just the nature of how groups work. A large group will naturally have more diversity, so you'll be able to subdivide the group further.

To an outsider, it's just all the same. Pickup trucks, Bud Light, and ‘Merica. I was never really into country music until my wife started forcing me to listen to it while she was driving (That's the rule – whoever drives, gets to pick the music, and just FYI it's 【ｖａｐｏｒｗａｖｅ】 when I drive).

As I started to listen to country music more, I actually found some sub-genres that I liked, and even some artists I started listening to. I like bluegrass. I like The Steeldrivers. I like Chris Stapleton. As it turns out, I'm a niche listener of country music. I had to dig in and actually do the research to discover the rich musical landscape beneath the surface of yeehaw music people typically think of.

Imagine a musician today, asking if country music was saturated. To an outsider, they may say yes. There are country music radio stations filled with music already. You can't possibly compete with them! There isn't any money to be made any more in the country music scene because all the stations already have music to play.

Of course, you know that isn't true.

There are still thousands of small towns across America with small country artists making a living playing their music in local bars. There are studio musicians you'd never know the name of who are recording music for the names you do, and they too are earning money playing music in the country music scene. Big bands retire or break up. New bands get popular. Country music isn't static. It's always changing, and there's always room for new, quality music.

3. Think Outside The Box And You'll Find A Unique Angle

On top of that, when you start looking outside of the recording artist niche, there are a lot of other things involved where you could still make money in “country music” without actually playing music. There's the studios charging the artists for recording time. There's the record label. There's the roadies, event organizers, song writers, and business managers.

Every single one of those people as a hand in country music, and every single one has a different set of wants, needs, fears, desires. The same principle applies to affiliate blogs, or any other type of online business.

The “make money online” niche isn't saturated, despite everyone saying it is.

My own experience has been that as I gained expertise in how to “make money online”, I was better able to define my niche, and find super low competition areas to write about. My blog you are on right now started out as a “how to make money online” style blog. Anything and everything. Stocks. Real estate. Amazon FBA. Drop shipping. Affiliate marketing. Online business. Everything.

Then it was just an online business blog. I dropped the real estate and stock stuff.

Then it was just affiliate marketing. I dropped FBA and ecommerce.

Now I try to tailor my content towards affiliate bloggers, e.g. people who want to make a website and publish content on a specific topic, then make money by adding affiliate links to their blog posts.

What A Fear of Niche Saturation Really Means

In my opinion, when people are concerned about niche saturation, what they're really saying is that they don't want to put in the work. Newbies want to jump into a niche and start recommending high ticket products for a quick turnaround.

They want to spin up a single landing page, collect emails, and send out copied email swipes to an email list of 500 people and make big money in the next few weeks. It's not going to happen.

They don't want to do the research, learn the specific, fail, start again, and do the endless amount of trial and error involved in getting good at something.

Maybe this is a cynical take. At the very least, I think this is just a thing that people repeat because someone else told them, and they don't think much about it.

At the end of the day, I like to say, there's always an angle. If you want to promote a type of product or a specific product, or you have an area of interest you'd like to explore for your affiliate blog, go for it. You can tweak your ideas along the way and grow your knowledge as you grow your site. You may end up somewhere you didn't expect, but I'm not going to stop you from trying out your idea.