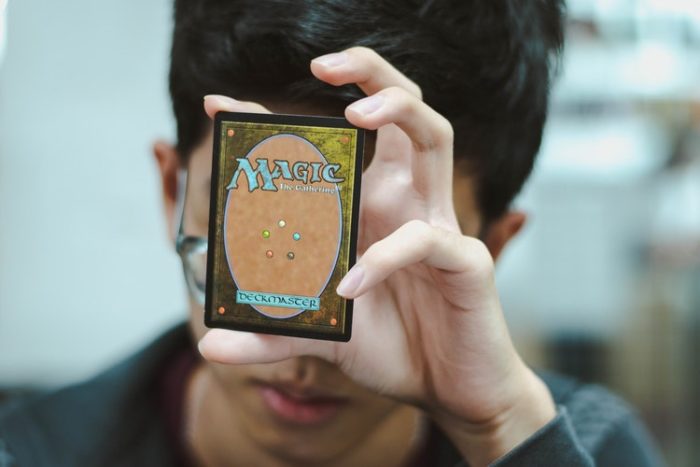 This is an interesting side hustle that I've been looking into for quite some time. So, we all know that Magic: the Gathering is a very popular trading card game with many different formats. There are even international tournaments where players get together to compete! But one of the more casual formats of the game, Commander, has blown up in recent years. And because of that, I have found myself wondering if you can really make money selling MTG Commander decks!

The popularity of MTG means that the game does retain income potential, even now, with Commander decks being one of the angles. But, before we talk about the side hustle itself, let's look at the Commander format.

Commander, which is reminiscent of a former game format called Elder Dragon Highlander, or EDH, is a format where players build a 100 card singleton deck, built from the card colors contained within the color identity of the ‘commander' of the deck, which must be a legendary creature or one of the special Commander planeswalkers created by Wizards of the Coast. (For those of you who don't speak nerd, you may need to do a bit of research to understand exactly what this means.)

The game format is unique because it blends competitive gaming with the social philosophy of ‘kitchen table magic,' which is the idea that you can build decks and compete with each other, but in a multiplayer format that is mostly designed to be fun and light-hearted.

But the interesting thing about Commander is that the deck constructed is very unique. Since it is a singleton format, and since it can use so many more cards than other formats within the game, deck construction ideas are virtually limitless. It is also true that some people do not enjoy the idea of deck-construction as much as just playing the game with a pre-constructed deck.

Wizards of the Coast puts out special pre-constructed Commander decks every year, thanks to the format growing in popularity at such a fast rate. But some people want to play decks other than the precons, and end up buying decks from other players instead.

So, this led me to wonder if there could actually be a side-hustle here. And if so, how one could you go about pursuing it?

Let's talk about it!

Getting Started: What You Need

The main thing to keep in mind about this potential side hustle is that you need to have at least some kind of idea of how Magic: the Gathering is played. You also need to be familiar with the rules of the Commander format of the game.

But as long as you know about these, the only thing left to do is to start building decks!

This is actually a really cool side hustle idea for people who like to play the game, because they can slowly work to put decks together, playtest them, and then eventually sell them whenever they are ready.

But there are still two big challenges associated with this hustle that I can foresee already. These are…

So, you have to buy the cards to build the decks. They will cost you a certain amount of money.

But you also have to market your product, and mark it up enough that you are actually getting a profit out of it.

The big problem here is that, nowadays, anyone can ‘net deck' Commander decks. Meaning, they can find a deck build online, purchase those cards from a website, and start playing with the deck.

So what purpose is there in a person building MTG Commander decks and then re-selling them if people can just net deck and order the cards for cheap?

This is a good question, but there is still the possibility that you can turn this into a side hustle. Here is why.

Why This Side Hustle Can Still Work (Sometimes)

So, the tough part of this side hustle is finding your customers. Once someone really starts to get into Commander, they usually start building their own decks or ordering the cards online and assembling pre-built decks themselves.

If you build a Commander deck for someone, you are going to have to charge extra for your time. So why would they pay extra to buy it from you if they could just buy the cards cheap online and then assemble it on their own?

The key to making this side hustle work is in finding the right customer. Believe it or not, there are people out there who love Commander, who DO NOT like building decks. I had a friend once who actually paid another one of his friends to build his decks for him. He even went as far as telling his friend to pick out the cards.

They set a price limit, and his magic-savvy friend started building!

His problem was that he was a busy professional who didn't have time to sort through magic cards and put decks together. He only had a little time for Commander every week, and he wanted to spend it playing the game… not building decks.

But this type of player is admittedly rare. Most players can now use the internet to build their decks quickly, easily, and for the minimum amount of money possible.

So, with that being said, how should you go about running this side hustle if you want to make any money at it?

How To Sell Commander Decks And Make Money Doing It

I've been playing Commander for years. And if I were going to try to make money selling decks, here is how I would do it, in a simple, step-by-step formula.

At the end of the day, it is important to remember that this side hustle would doubtlessly require a LOT of patience. You cannot expect to sell your decks all at once, and you cannot expect to mark them up super-high and then sell them like that either.

Wizards of the Coast offers a LOT of value in their pre-constructed Commander decks, and these are tough to beat in price for people who are buying the cards on the street.

So to avoid being forced to compete with these prices directly, you should build decks that differ in style to those that are coming directly from the company.

We publish a lot of content on this site about making money with side hustles. And with everything I know about side hustles and Magic: The Gathering, here are two statements that I completely believe about this potential side hustle.

Even with these things being said, this would be a tough hustle to sell. Even if you do manage to sell a deck, you are going to be hard-pressed to make more than $10 or $20 extra on it. And even THAT would be a stretch, unless you were able to find the perfect customers and get great deals on cards to put into the decks.

This is a side hustle that does have some potential. But it is definitely not a sure thing, and it is certainly not something that is going to make you a lot of money in a short amount of time.

Our Final Opinion Of Selling MTG Commander Decks For Money

Should you try to build some MTG Commander decks and sell them as a side hustle?