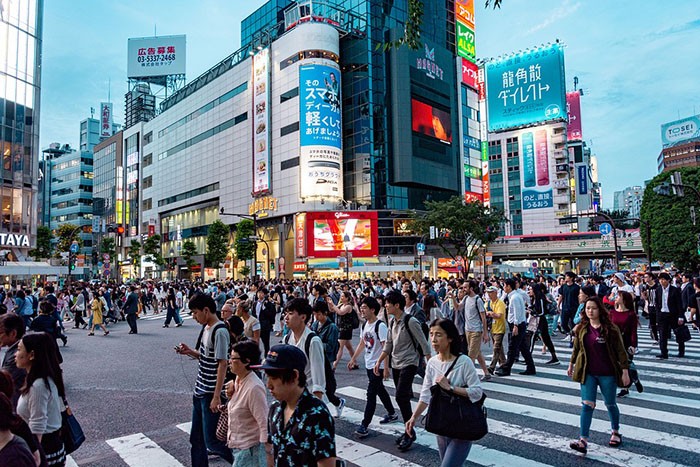 More and more Americans flock to Japan each year to live and work. If you’re an American who’s considering a move to the “Land of the Rising Sun” to work, I’ll show you the best jobs for Americans in Japan today.

What’s not to love about Japan?

Seriously? Japan has so many things going for it, it’s almost unbelievable. For one, the Japanese people are nothing short of amazing.

In a country that’s home to 33 million people, they are known for their consideration and kindness. They foster a sense of community among their people and extend it to foreigners as well.

They take care of each other and their country, which is displayed in part through a long life expectancy with its elders, who make up 21% of the population.

Japan also has some of the lowest crime rates of anywhere in the world. I’ve heard multiple stories of women feeling comfortable walking most anywhere there without apprehension.

Japanese people will go above and beyond to help others out, even if they are foreigners or Americans who happen to be there working and living in Japan. The integrity of the Japanese people is second-to-none.

You also won’t find many places as clean as Japan. It is a country whose people take pride in caring for their environment. Japan has so many people, but very little litter or trash in the public eye.

Japan is an enchantingly gorgeous country that possesses a contradiction of contemporary modernism and beautiful and raw, natural surroundings and landscapes.

You won’t go hungry in Japan either. Japan is known for some of the best culinary arts the world over. How many of us don’t like Japanese food and as Americans, we’re accustomed to a smidgen of authentic Japanese cuisine. Imagine the real thing!

People can travel wherever they want within a local area or around the country, either by train, subway, or taxi. They are literally everywhere! If you end up working there, many employers even offer transportation allowances. How cool is that?

The Japanese are a beautiful culture with tradition ingrained in their souls as well as allowing avenues for the modern metropolis to thrive. Japan is home to amazing architecture, breathtaking gardens, fabulous cuisine, cultural arts, a thriving film industry and pop culture, including anime.

Thinking of Working in Japan?

You wouldn’t be alone. Tens of thousands of people now call Japan “home” and more Americans retire in Japan than any other non-North American country. And some start their new life there by working in Japan.

So, if you’re thinking of getting a job in Japan so you can live there for a while or even, permanently, I’ll try to make some suggestions that can help.

If you work for a large corporation or company, you can check to see if they have an office in Japan. Many do and it’s possible to put in for a relocation or transfer.

Other than that, I’ll show you some of the best jobs for Americans in Japan. But first, let’s talk about the best places in Japan to find jobs.

Naturally, the first place American workers think of for work in Japan is Tokyo and with good reason. It’s the largest city in the country, with the largest metropolis in the world, garnering the highest population.

The most popular sectors to work in Tokyo are education, business, recruitment, journalism, and entertainment.

If you prefer a more peaceful settlement that is a departure from the hustle and bustle of a city like Tokyo, Nara may be more up your alley.

Once the capital of Japan, Nara is filled with history and culture. It’s somewhat idyllic and is popular for its arts and crafts, which include painting, swords, and pottery. Tourism is big here and if you’re an American wanting to work in tourism and hospitality, this is the place to be.

Once again, the tourism and hospitality industry thrive here in Okinawa. It’s also home to much of our military men and women stationed in Japan.

It’s set against beautiful beaches surrounded by jade-green waters. If you decide to work and make Okinawa home, it might end up feeling like a vacation 24/7. It’s that lovely!

Osaka is a culinary haven. Osaka is known for its food fare and rich culinary experiences and appeal. If this happens to be where your expertise lies, Osaka might be a good fit for you.

There are opportunities where you can teach culinary classes, or work in restaurants. There are also huge opportunities to work as an English speaking teacher, both for corporate English corporation and international schools.

In addition to the individual areas I highlighted with each country in Japan, these are the top jobs for Americans in Japan overall.

English Teacher – As with most jobs in foreign countries, an American working in Japan will find their biggest opportunities exist as an English teacher. The Japanese government now requires its students to learn the English language.

They hire native English speakers to teach elementary grade level students. There are also jobs outside the early education classroom. Some want to learn English for business purposes and others just want to learn it as a pastime.

Teaching English is one of the easiest jobs to get in Japan. There are many international schools that always have available spots. You could also be an English tutor on your own.

In any case, teaching English is a serious business in Japan. The pay runs around $2,300 a month.

Translator – If you have even limited Japanese knowledge, it can be easy to get a job as a translator in Japan. Some companies hire translators just to help out with new hires.

While the Japanese teach English in the schools, they rarely retain the knowledge. This is where translation jobs come in. These jobs are found more often in the largest cities.

Technological Jobs – I think we are all familiar with the fact that Japan is a leader it the technological industry. They are largely responsible for many of the cars we drive, the electronics we use, and the mobile phones we talk on every day.

Many of the international corporations are housed in Japan, including Sony, Fuji, Nintendo, Toyota, Honda, and Panasonic. Some will even recruit here in the U.S. for positions in Japan.

If you are a techie of any kind, it might be worth your while to check out the technological jobs in Japan.

The Japanese people are a gracious society who rarely complain. They give a lot of consideration to ethics, both in their personal life and career life.

It might be important to remember this when living and working in Japan. There are occasions when you might have to work beyond normal work hours and you may not be paid overtime. This is just how the Japanese corporate culture operates.

Teamwork is also highly valued in Japanese culture. It’s best to remember to approach your work with an attitude of working for the greater good, rather than looking to get ahead or other individual expectations.

You might also want to consider taking a Japanese class once in Japan. They are free and offered by local community centers.

Even though English speakers are highly valued and even catered to at times in Japan, it would just make your life easier overall, while there. It also opens the doors to more jobs outside of English teaching jobs.

If you apply for a corporate job, many times you will be asked to take the Japanese-Language Proficiency Test, and they look for minimal scoring on the test at the N1 or N2 level. Taking Japanese classes really helps to do better on the test.

Salaries and Cost of Living

Salaries can be quite different from one position or location to another. $2,500 to $3,000 a month seems to be an average. Sometimes housing is included or stipends are offered, depending on the type of job.

Housing can run up to $1,000 a month for a one-bedroom apartment in the larger cities, to just $500 a month in the smaller ones. Many people live in a type of housing called “rabbit-houses”, which are tiny apartments.

Basic meals are affordable at an average of $6 for lunch, but specialty food and meals are more expensive. Food that is not native to Japan, such as pizzas and many fruits, wine, and even cookies are substantially higher than what you would pay in the U.S.

In order to work in Japan, you must have a visa and a college degree, in order to get a work visa. A company will be looking for this when they consider whether or not they will hire you.

If you meet the qualifications, it’s easier to get a visa by getting hired on by a company that will sponsor you.

Someone who is qualified for a job and meets the criteria is an asset to Japanese companies and they have a lot of reverence for such people.

You can also get a temporary working holiday visa if you are undecided. This type of visa is good for 90 days or less for American citizens and it’s a good way to test the waters and find opportunities.

Take everything into consideration if you are thinking about moving to Japan to work, whether temporarily or permanently. Adjusting to a new culture has its challenges, but can be highly rewarding when you know more what to expect.