Can You Really Make Money With The ProductTube App? 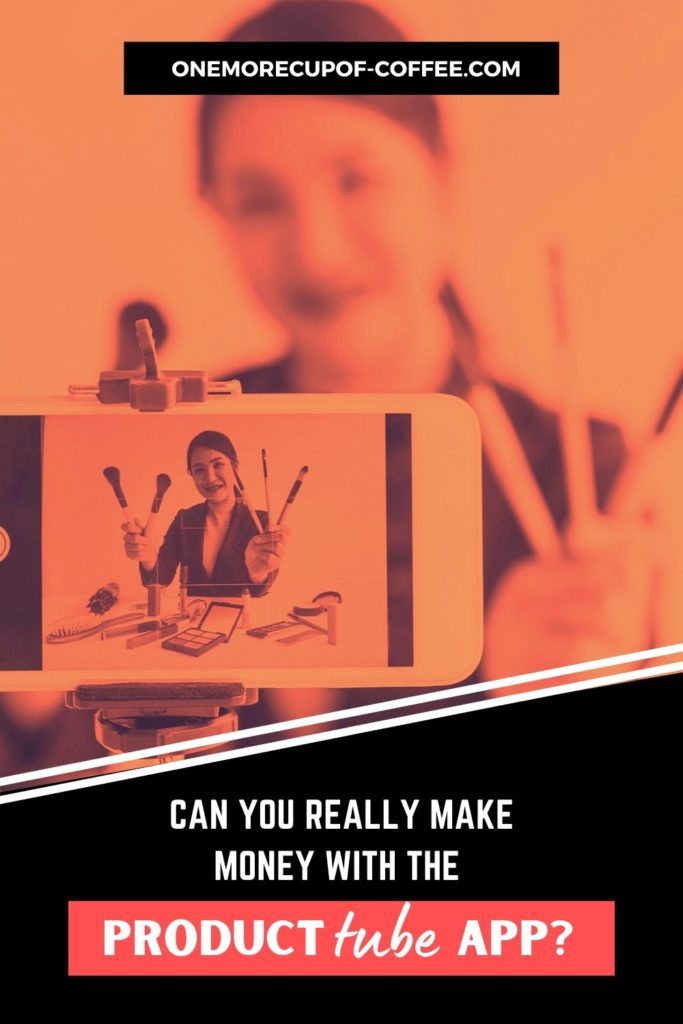 I found this app while researching ways to make extra money online. But can you really make money with the ProductTube app?

This is obviously the question that I asked myself as I downloaded it and got ready to give it a try. Honestly, apps that are actually good for earning extra cash are few and far between—but I will admit that I was hopeful about this one.

Making Money With The ProductTube App

The first thing to think with ProductTube is the app itself. As far as basic stats go, the app seems to perform pretty well. It has over 10 thousand downloads and has a Google Play Rating of 4.4 stars. 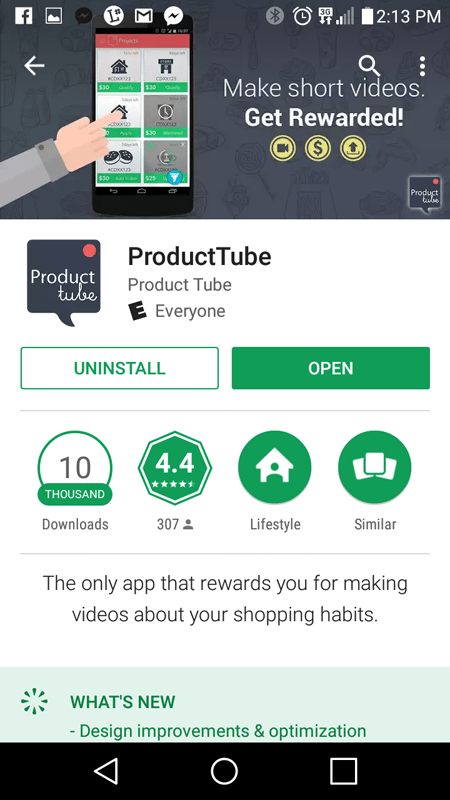 But obviously, you can’t judge a book by its cover (at least, not very accurately). So I opened the app up for myself and gave it a try.

Opening up the app brought me to this screen first. 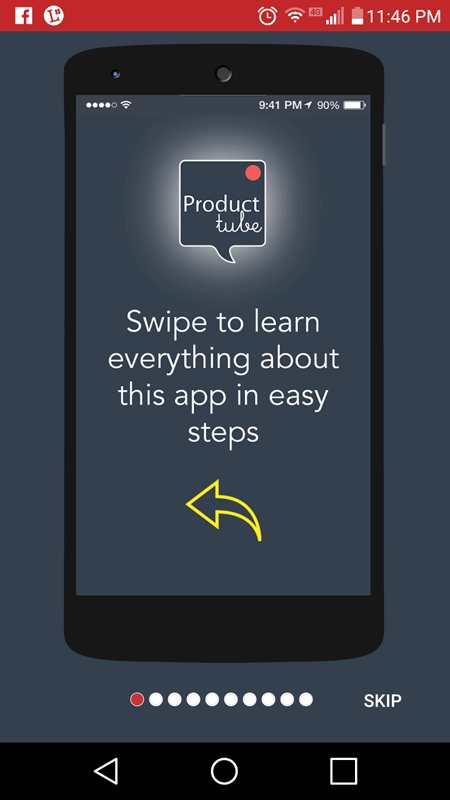 This was the first in a series of introductory pages that seemed intended to teach the user about the app. Here is what I found out from scrolling through and reading these pages…

Alright, that was pretty much what I learned from these scrolling screens. The next screen I came to was a sign-in screen. I signed in with Facebook, which is my favorite way to sign up for apps like this… and was taken to this screen—which was a bit disappointing to me. 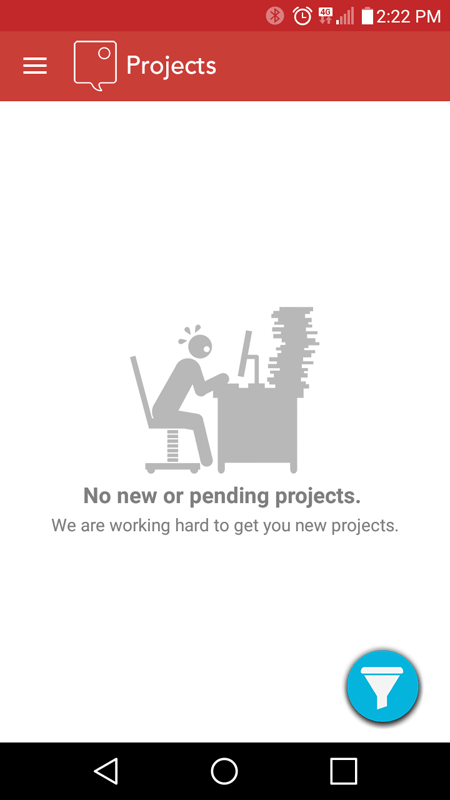 At this point, I decided to take a look around inside of the app before worrying about how to get projects… so that’s what I did next.

Taking A Look Around Inside Of ProductTube

There was a little blue icon at the bottom right part of the screen that really grabbed my attention, so I clicked on that first. It brought up this screen, which seemed to be some kind of product-management hub. 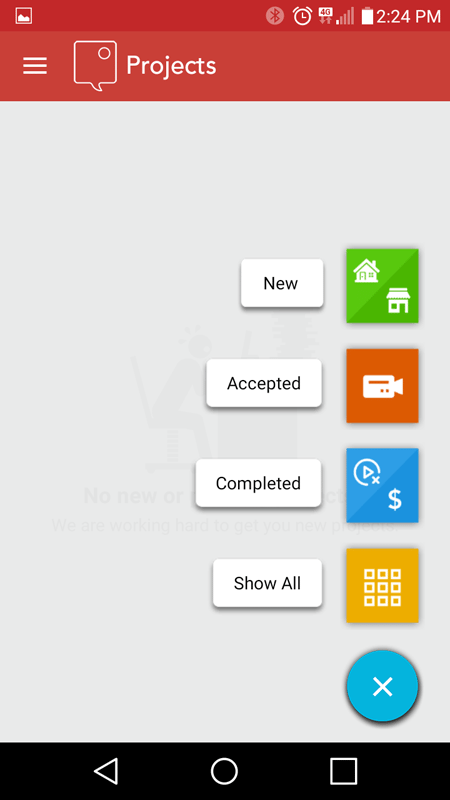 Next, I clicked on the drop-down menu at the top-left hand corner of the app. Here is what I found. 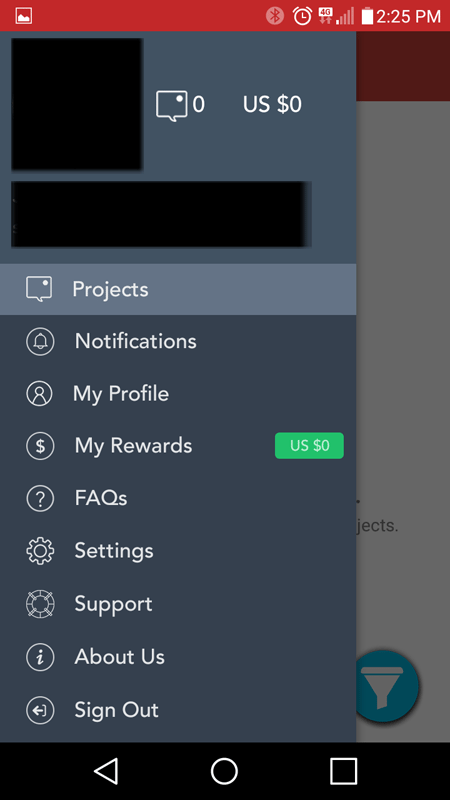 My personal profile information was displayed at the top of the app menu. But below it was a ton of options for different places I could visit. This was where I found the Rewards section, the FAQ section, and pretty much everything else.

Just to learn more about the app, I clicked on the ‘About Us’ section. Here is what I found. 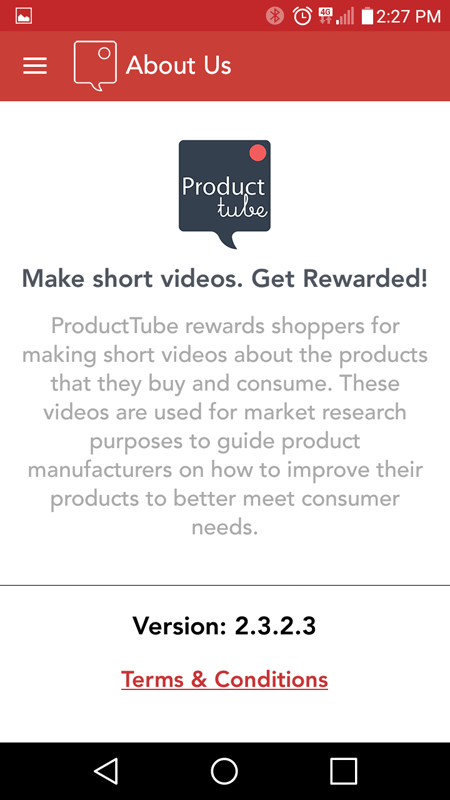 Ok, at this point I was beginning to figure out exactly what the app was designed to do. This app basically rewards shoppers for making videos about products. These videos are used for market research and seem to be how the app generates its revenue.

This is the second app like this that I’ve reviewed. These video review apps are becoming more popular, probably because video technology is so much more accessible than it used to be.

Nowadays, everyone has a video camera in their pocket—and communication might actually be easier this way than through written reviews because a lot of people don’t have the time to sit down and type out a full review—but almost everyone has time to make a short video.

That is my two-cents worth, anyway.

But since I didn’t have any projects in my area, I really couldn’t ‘test’ the app as well as I wanted to. So I decided to go take a look at the Google Play Store Reviews to see what other people were saying.

I had a feeling that I wasn’t able to find a job because I live in sort of a rural area (my hometown only has about 6,000 people in it), but if other people were having a similar experience, I would definitely be able to find out about it in the reviews.

What Other People Said About ProductTube In The Google Play Reviews

I learned several things from reading the reviews. One user said that they had gotten multiple offers for projects so far (the app notifies you when projects become available), and that all of them had been worth between $5 and $30, depending on the project.

This same user also gave an example of what one of the projects was. They said that one of the $10 projects was to go to a local store (it was a specific store) and video record what brands of gum the store was displaying near the checkouts.

It was a project that probably would have only taken a few minutes, and yet it would have paid out $10… so that sounds pretty cool.

Most people seemed to say that the tasks were easy and straightforward. I did read that some people complained about the tasks being ‘few and far between.’ That seemed to be my problem.

The app just doesn’t post a ton of jobs, which makes earning money with it a bit more difficult. This review seemed to give the most prime example of how disappointing the app has been in providing a larger quantity of extra work… 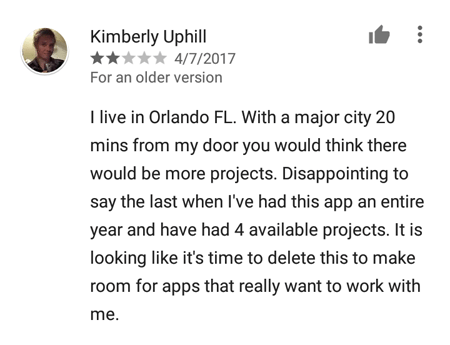 Other users had similar results. One other review said that they only got projects once or twice every one to two months… which isn’t very often.

But what about the payout? How easy is it to get your money once you make it?

That was my next question, so let’s talk about that next.

How Do You Get Paid With ProductTube?

You don’t have to have a certain amount of money in your account to get your rewards from PoductTube, which is awesome. This means that every time you do a job, you can just get paid without having to worry about accumulating more money.

The app only pays out one way, though. They give you the money in Amazon Gift E-certificates. You can get your money withdrawn by going to the drop-down menu, clicking on My Rewards, and then clicking Redeem Now beneath your balance.

I was pretty impressed with this, to be honest. It’s nice that you don’t have to have a certain amount to cash out. In a way, it would be nice if the app offered PayPal, but Amazon is pretty much like cash, for the most part. Close enough for me, at least.

There were some things I liked about the ProductTube app, but there were also some ways in which it disappointed me.

First of all, I liked how much it paid out for jobs. I also liked that the app worked as well as it did. It was simple, straightforward, and to the point. The fact that the jobs were also video reviews was also pretty cool.

But there were also some downsides to it for me. First off, the biggest downside was that it just doesn’t seem to offer as many projects as I would like in an extra-cash app.

Secondly, it seems like you might get more projects if you live in a really busy metropolitan area, which I don’t—so I might have an especially difficult time finding projects near me with it.

The payout system works well, and the app actually has really good reviews… which it deserves.

But will I be leaving it on my phone?

If the app had projects lined up that I could take part in every day, or at least a few times a week, then yes—this app would be super-awesome. But as it is, it just doesn’t seem to be worth it to me to keep it around.

Make no mistake—if you want to keep the app around and respond to notices when projects become available, then you can make some sweet extra cash. But I guess, for me, the consistency just wasn’t there enough to make it worth it.

I sort of want to know that I can make my extra cash on terms that I can rely on and plan on a little bit, and because the projects seem to come so sparingly with this app, I just couldn’t find that with ProductTube.

Two thumbs up for a great app and some great money-making opportunities, but I am afraid that this one wasn’t quite the one for me.

Our Final Thoughts About The ProductTube App

Should you download it and keep it on your phone?