Can You Really Make Money With The Observa App? 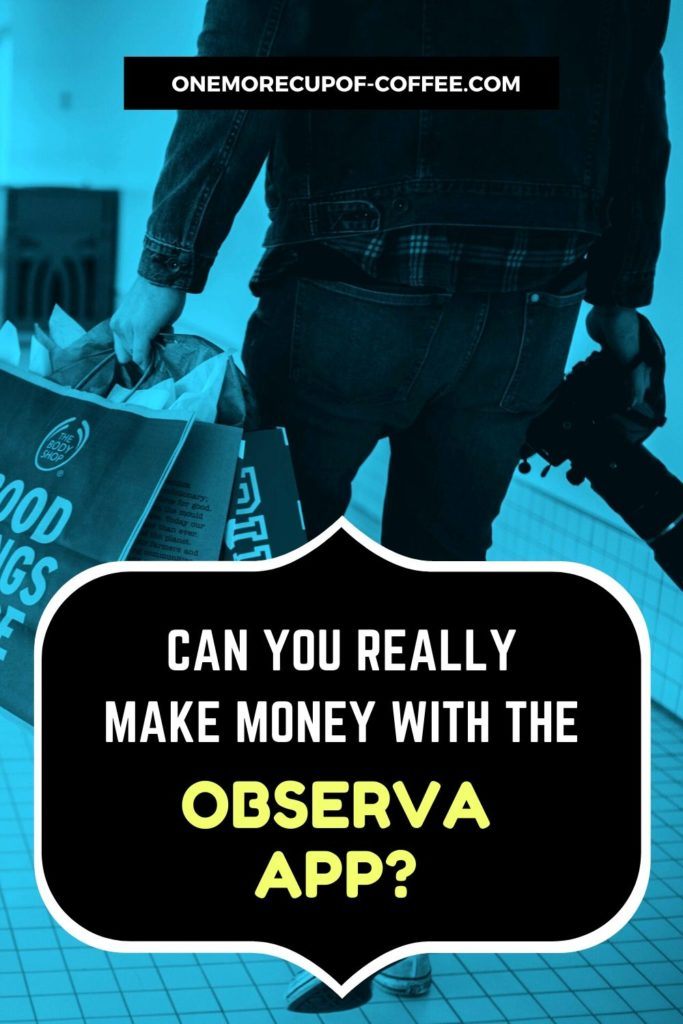 I’m all about earning extra money… which is what caused me to be drawn to this app. But can you really make money with the Observa App? This is the big question that I wanted to answer, so I decided to download it myself and give it a try.

Making Money With The Observa App

As always, my first approach was to examine the app's popularity. My first look at the Google Play stats were not all that bad. 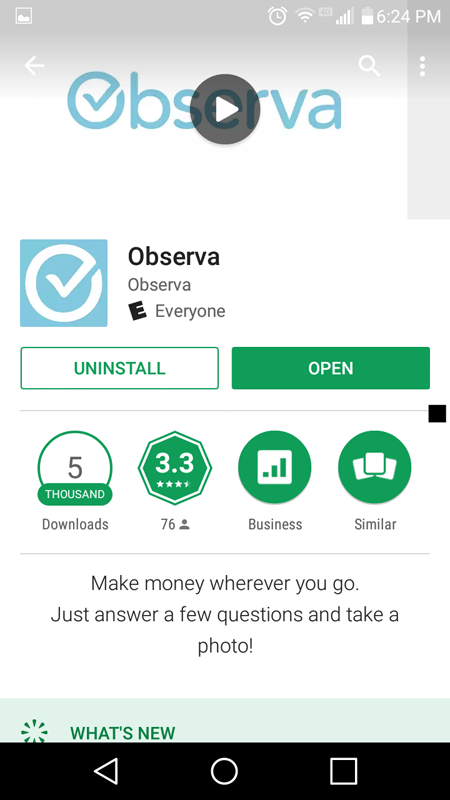 It had a 3.3 star rating, which isn’t awesome… but it also isn’t necessarily terrible. Most apps that I’ve liked have had more than 3.5 stars, but I have also found some exceptions to this rule. So for me, Observa seemed like it was right on the line here.

It also boasted over 5 thousand downloads, which is pretty cool—but still, not quite what I would call ‘amazing.’ I’ve reviewed a lot of apps lately with over 500,000 downloads… and still haven’t liked a lot of them!

But I find that I am generally more likely to like an app when it has over 500,000 downloads… so that is another thing to take into account.

But, I am also a big fan of giving things a try. I hate to judge an app based on what the Google Play stats say, and I also hate to just ‘read about it online,’ for several reasons.

First of all, most reviewers don’t actually try out the app. Secondly, even if they do, they often don’t tell me the types of things that I personally want to know.

Namely… is this app going to help me to generate extra cash? That is the big question!

So that is the number-one thing that I look for. (Sorry if I seem like a Scrooge… but hey, cash is cash, and extra money is pretty much the goal here!)

So, without further delay, here is what I found when I opened up and used the Observa App for the first time.

Opening Up The Observa App For The First Time

Opening up the Observa app, in the very beginning, brought me to a loading screen. It looked like this. 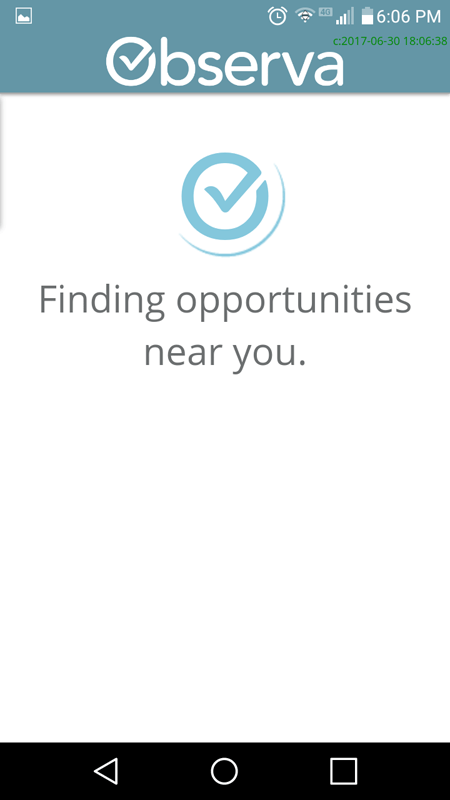 Apparently, the app was busy looking for opportunities to earn money in my local area. After barely 15 seconds, the screen changed—and a map of my locale was brought up. 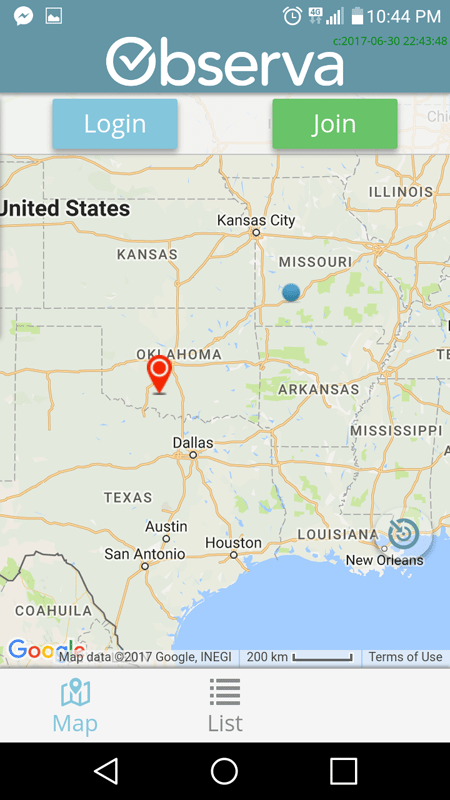 Ok, at this point, I realized that the nearest opportunity to earn money with the app seemed to be a state away! But I didn’t let this bother me. I realize that I live in a rural area, and that this can often impact my ability to earn real cash with apps like this.

But I didn’t want to give up on this one quite so easily.

What if someone from that state wanted to read about the app? This alone motivated me to continue my research. Plus, what if some jobs did become available close to where I lived? If they did, then maybe I could still make use of the app.

But, I will also say this. Right away, I could see that this was a pretty significant downside. This app seemed to be quite situational, in a geographic sense… because some people are just going to have more luck with it than others, and it would seem that your level of luck truly depends on where you live.

So, in that sense, I see this app as having a pretty significant downside.

With that being said, I was very curious to see what this job was. I was also very interested in seeing how well it paid. So that’s what I looked at next.

Looking At How Much You Can Earn On An Observa Job

I clicked on the ‘List’ icon at the bottom of the screen, and was taken to this page. 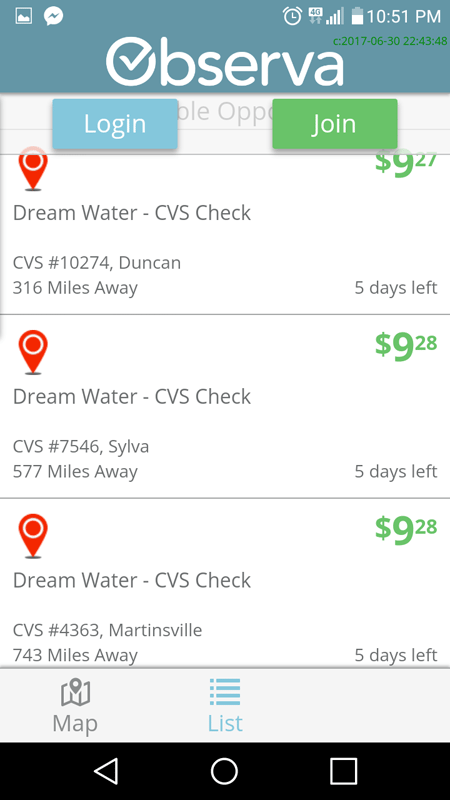 The nearest job was 316 miles away from me… but, it paid a rather impressive $9.27. This wasn’t necessarily enough to warrant a 316 mile drive on my part—but it was a good amount of money for a project like this.

Here is what the job description said…

“Today you will be completing a simple observation for Dream Water. The task should take no more than 10 minutes.”

Ok, so far so good. The job was at a CVS, apparently—but it also seemed like you would need to be present to complete the job—and therein lies another problem with this app.

The app, in theory, pays out a rather astounding $1 per minute if you only factor in the time it takes to actually complete the job (which likely involves a survey and a picture or two).

But, what they don’t factor in is drive time, and the fact that you need to physically be at a certain place at a certain time to actually earn that money.

That, to me, sounds a little less flexible than I would like.

I browsed the other jobs, and found that they tended to pay out about the same—in amounts ranging from $7 to $10.

I also found out that the company pays out via PayPal, which is pretty cool… but I had already learned everything I really needed to know about Observa to make an educated decision about it. So that is what I will talk about next.

But before I do, I want to talk for just a minute about some stuff I found in the Google Play Reviews.

Firstly, I did read that a lot of people seemed to notice the same thing I noticed about Observa. It seems like this app is awesome—if you live in an area where you can get jobs. There are, admittedly, not many jobs offered by the app—so finding them in your area may or may not even be possible.

With that being said, the app does seem to work well for people who use it. Some people have reported that they have trouble logging in—but for the most part, you do the jobs (if there is one nearby), and then you get paid.

You get paid pretty quickly, from the sound of it. Most people reported that they were paid in mere hours, or a day at the most.

This further solidified my decision about the app, which I will now discuss.

Do I Feel Like Observa Is Worth It? Will I Be Keeping It On My Phone?

Alright, I have used apps almost exactly like this in the past, so I am pretty well acquainted with them. Observa did bring a few unique things to the game. They paid better than most apps in this category that I have seen, so that is one thing.

The app also seemed to function well. When you earn money, you also get paid quickly… so that’s a thing to be optimistic about.

But there are also a lot of problems (that I can see) with this app, and other apps like it.

Firstly, there are not that many jobs available… and those that do become available are often vast distances from the people trying to use the app.

Since the app requires you to be in a certain place to fulfill projects, it would seem that its usefulness would be severely limited for people who don’t live in a densely populated area.

But even people in densely populated areas don’t always get jobs with Observa—so it is really hit or miss in that sense with this app.

But this brings up another point that is perhaps even more important to think about. If the purpose of the app is to make extra cash, then it seems to stand to reason that you would want to be able to earn the cash on your terms… from where you are now, on your own schedule.

And yet, the app requires you to be at a certain place to fulfill the job. Granted, someone might pick up a job and just happen to go to the business associated with it, but the odds of such occurrences are likely so low that they don’t happen very often.

When it comes to making extra money, I want two things.

That’s why apps like this do not tend to earn a permanent place on my phone. Yes, once in a while they can earn you some decent cash—but in the end, you are left up to the luck of the draw, and that is not how I prefer to earn my extra money.

Our Final Thoughts About The Observa App

Can You Really Make Money Stuffing Envelopes?
Next Post:Clickbank University 2.0 Review: Is it Worth The Price?