Can You Really Make Money With The BerryCart App? 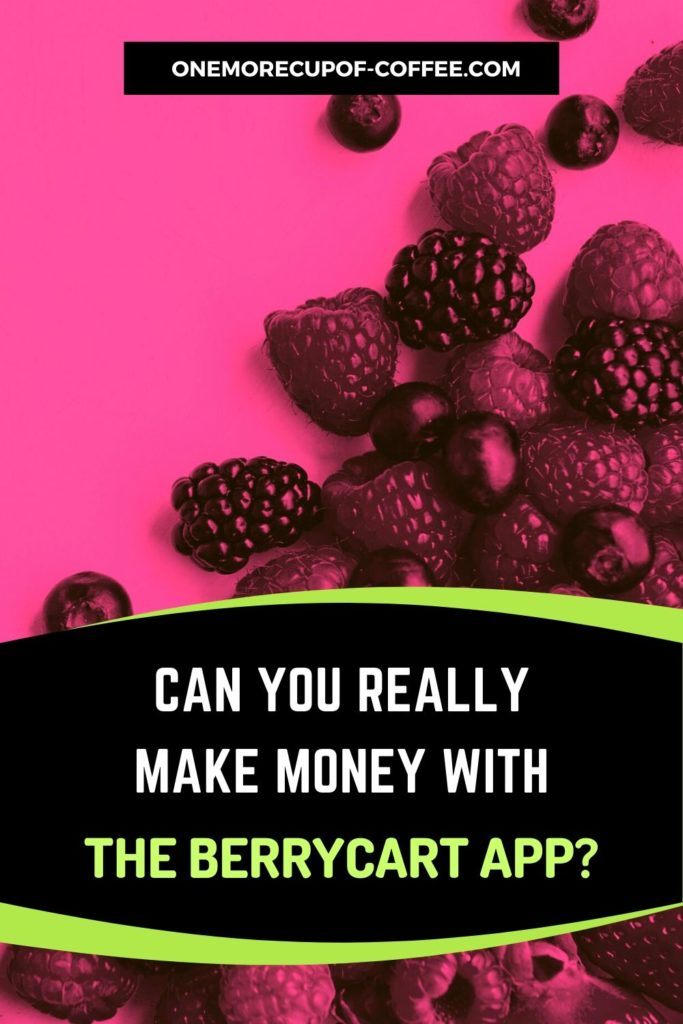 This app promises to give you cashback rewards on organic, gluten-free, vegan, and non-GMO foods… but can you really make money with the BerryCart App?

At first glance, this looked like a shopping app to me… but it seems to be specifically focused on health-food… foods that are non-GMO, gluten-free, organic, etc.

These types of foods are really trendy right now, so it is no surprise that there is an app out there that would offer to help you save money (or in this case, earn cash back) while shopping for them.

Making Money With The BerryCart App

Let's start off witht the app itself. As far as basic stats go, the app has been downloaded over 50,000 times, and has a Google Play rating of 4.0 stars.

That’s a pretty big audience and a pretty good rating, so I was pretty excited to see what other people were finding inside of it. 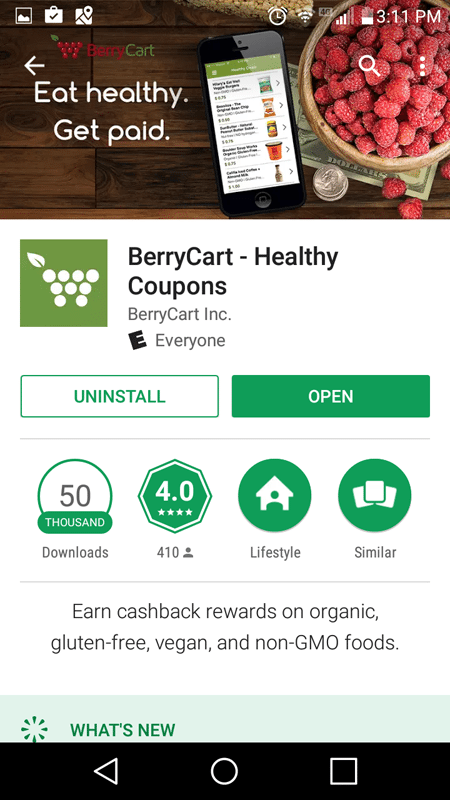 So I downloaded it myself, and decided to try it out. Here’s what I found.

Opening Up BerryCart For The First Time

Opening the app up for the first time led me to this screen. 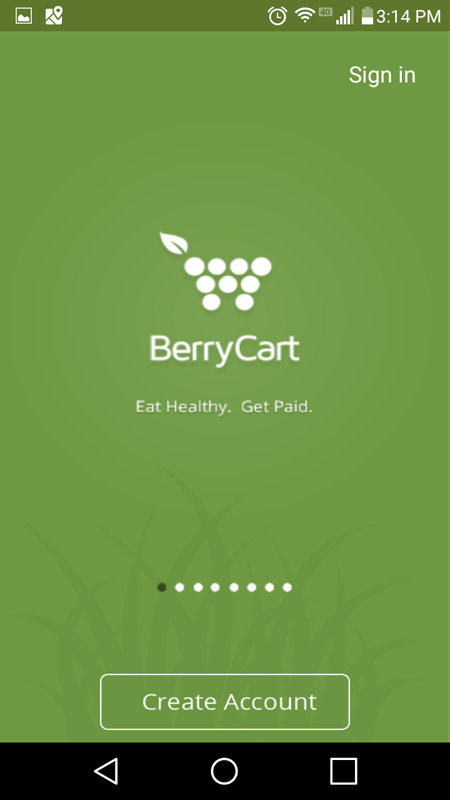 There were several screens here that I could scroll across to learn more about the app—so I did some scrolling and reading. Here are the main points that I learned about through this process.

I’m not completely sure, but I feel that this was like the order of directions for how the app works. First, you can use the app to discover better foods, find healthy deals on them, then unlock cash rewards, etc.

I clicked ‘Create Account’ on the first screen to continue forward, and was taken to this screen next. 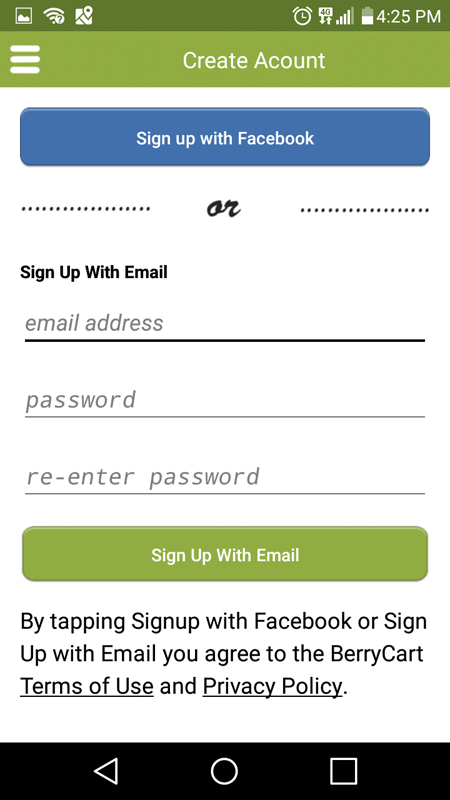 I decided to sign up with Facebook, which proved to be pretty much painless (as it usually is), and was directed to this screen. 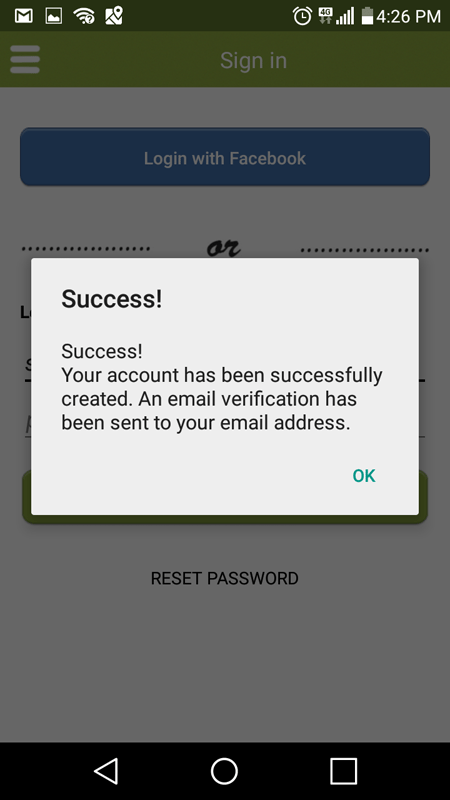 I got the verification email pretty much instantly. It was a simple matter to verify it, and it was easy to do via the browser on my Android phone. 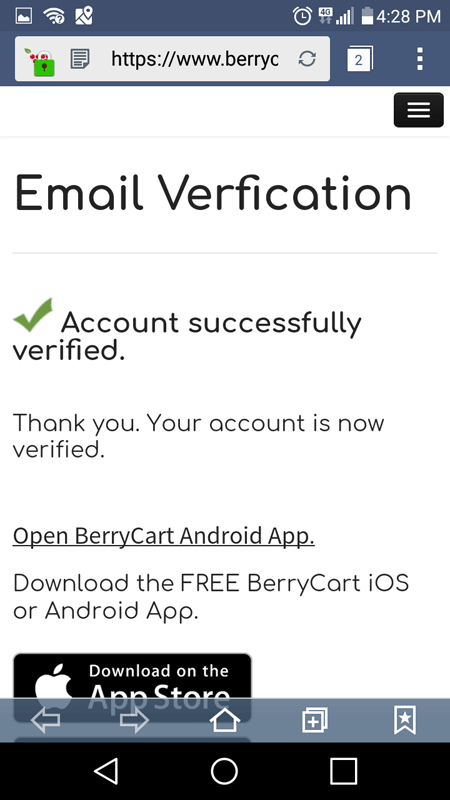 After this step, I closed my browser and returned to the app.

Getting Started With BerryCart

This was the first screen that I found upon entering the app as a registered user. 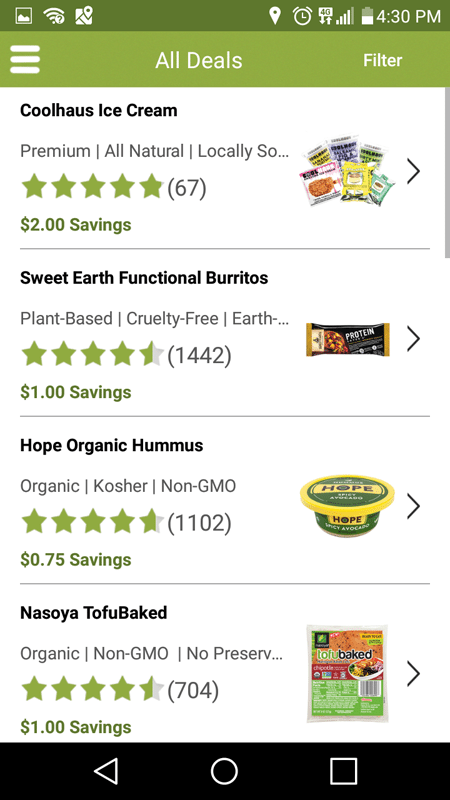 I assumed that this was the main hub of the page, and decided to do a bit of looking around. I realized that I was on a page called ‘All Deals,’ and that I could scroll down to find savings on natural products. The savings were pretty good, to be honest. I saw deals for $1 off, $2 off, etc.

A drop down menu at the top left corner of the app gave me some more options. Here is a screenshot of what it looked like… 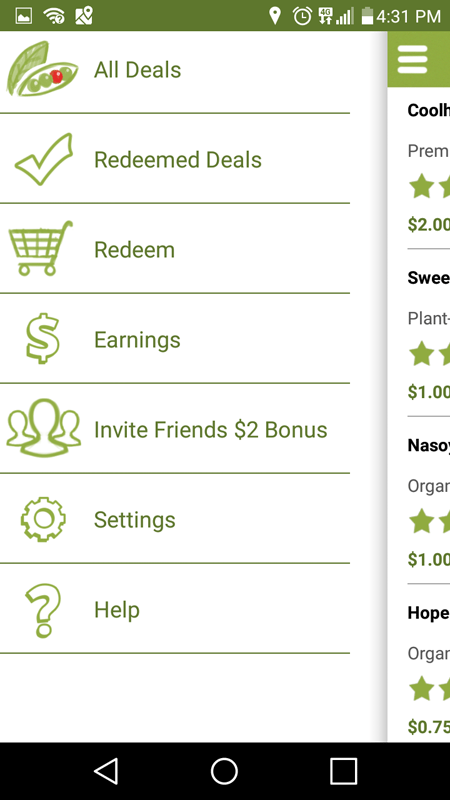 This seemed to be how you change what part of the app you are in. Just to learn more, I decided to exit this menu and click on one of the deal listings, just to see what popped up.

This is a screen of what a listing looks like once you’ve clicked on it. 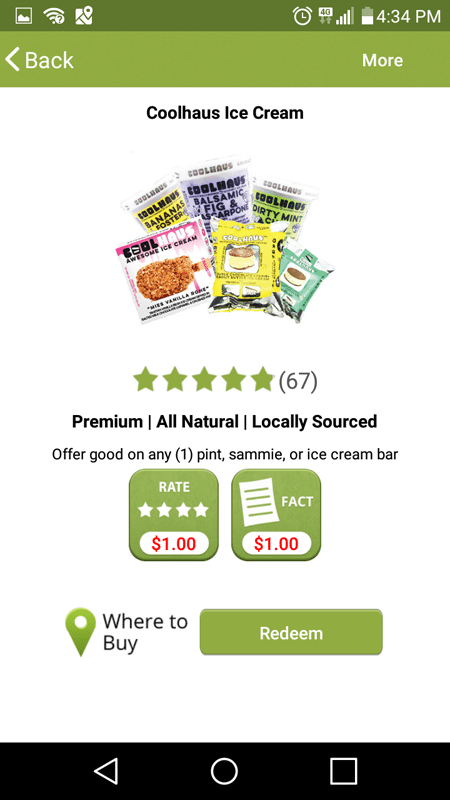 I noticed that there was a redeem button near the bottom, so I clicked on that next.

The app told me that I needed to complete at least one action before I could redeem this offer, which I thought was a bit weird… so I decided to keep trying to see if I could figure out exactly how this worked (I figured out later that the answer was right in front of me… but I will get to that later).

Checking Out The Drop Down Menu

Next, I went to the drop down menu again, and selected the ‘Redeem’ option. This led me to a barcode scanner. 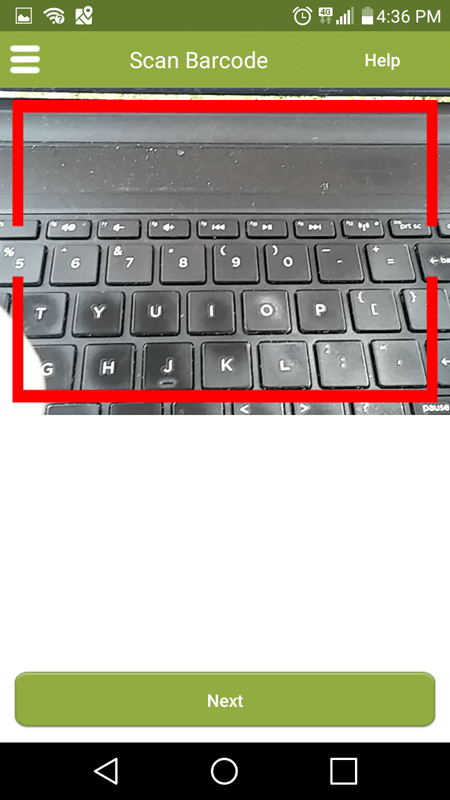 This got me thinking that I might have missed a step, so I went back to the listing for the ice cream that I looked at earlier, and realized that there were two buttons on it that I had ignored before. One of them said ‘Rate,’ and had a $1 sign on it, and the other said ‘Fact,’ and it also had a $1 sign on it.

I clicked on the Fact button, and it actually brought up a little page with some facts on it about the ice cream, with a ‘Submit’ button underneath it.

Once I submitted it, an apple emblem popped up, and it said ‘complete’ across the center of it. Now, I tried once again to click the ‘Redeem’ button on the listing and it brought up the barcode scanner.

So, I had pretty much figured out how to try to redeem these specific deals… but next I had to figure out how to get the money from them. So I went back to the drop down menu, and selected the ‘Earnings’ tab. This brought me to this page. 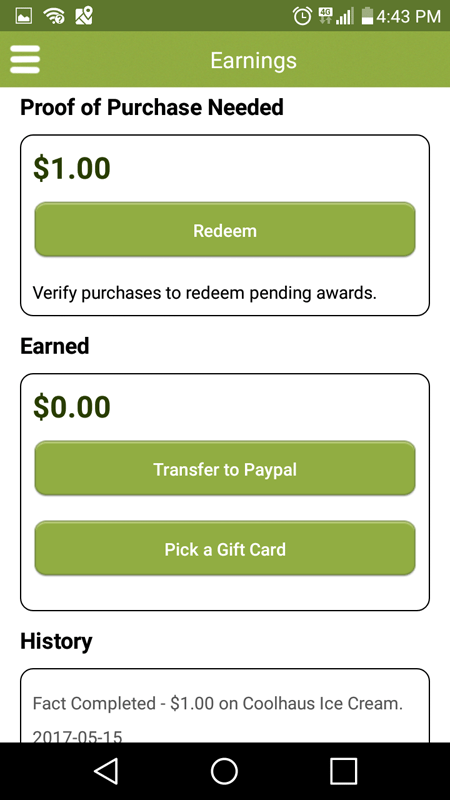 Ok, so I had completed a $1 fact, and this showed up in my ‘pending’ section. But to actually get the cash, I needed to redeem the purchase by scanning the receipt, to show that I had actually purchased it.

Once I did this, the money would go to my ‘Earned’ section, where I could then transfer it to PayPal or get a gift card with the money on it.

There were quite a few gift card options to choose from. Here were just a few… 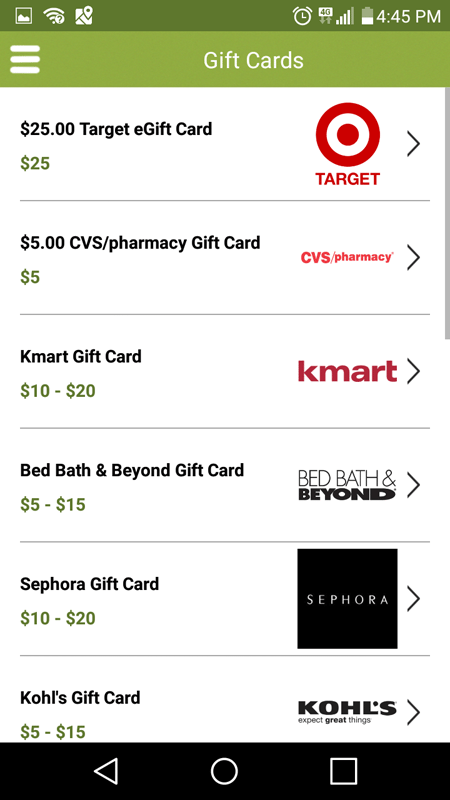 But next, I was interested in finding out if the money that I could potentially earn with this app was worth it. Did they have enough deals to sustain quality earnings? Were the cash back options good enough to make the app worth it in general?

These were the important questions, so that’s what I looked into next.

Can You Make Enough Cash Back On BerryCart To Make It Worth It?

One of the downsides I quickly noticed about this app was that there were not a ton of different product options.

So, with that being said, I would say that the lack of a larger variety of products on the app was a bit of a downside.

Another obvious downside to this app is that you have to spend money to earn cash back—so it’s not really going to do you any good unless you use it to get cash back on items that you would already be buying anyway.

But, with that being said, there were a lot of things that I liked about this app. First, it was super simple to figure out. Second, getting your money is really easy.

It has a good rating, and functions very well. I also liked that it was health-food centered. A lot of people would derive a lot of peace of mind from not having to worry about whether the foods were organic, gluten free, non-GMO, etc.

Plus, I like that the app gives you all kinds of different options for gift cards and payouts. You can get gift cards to almost every major retailer—but you can also just get your rewards put into your PayPal account.

My official opinion of this product is that it is actually really good. I may not personally be keeping it around because I don’t tend to buy a lot of these types of foods—so this app might not benefit me enough to make it worth the time required to stay on top of what is listed and such.

But… with that being said, I know that a lot of people are really into the health-food trend, and I feel that this app would actually be a really good fit for those people. It could also help to introduce you to some foods that you’ve never tried before.

So if you are interested in non-GMO and/or organic or gluten free foods, then this app might be worth even more to you than the cash back deals.

Overall, I liked this app. These shopping apps really tend to be worth the time if they cover products that you use on a regular basis… and the cash back rewards for these products are, honestly, pretty good.

I give it two thumbs up!

Our Final Thoughts About The BerryCart App